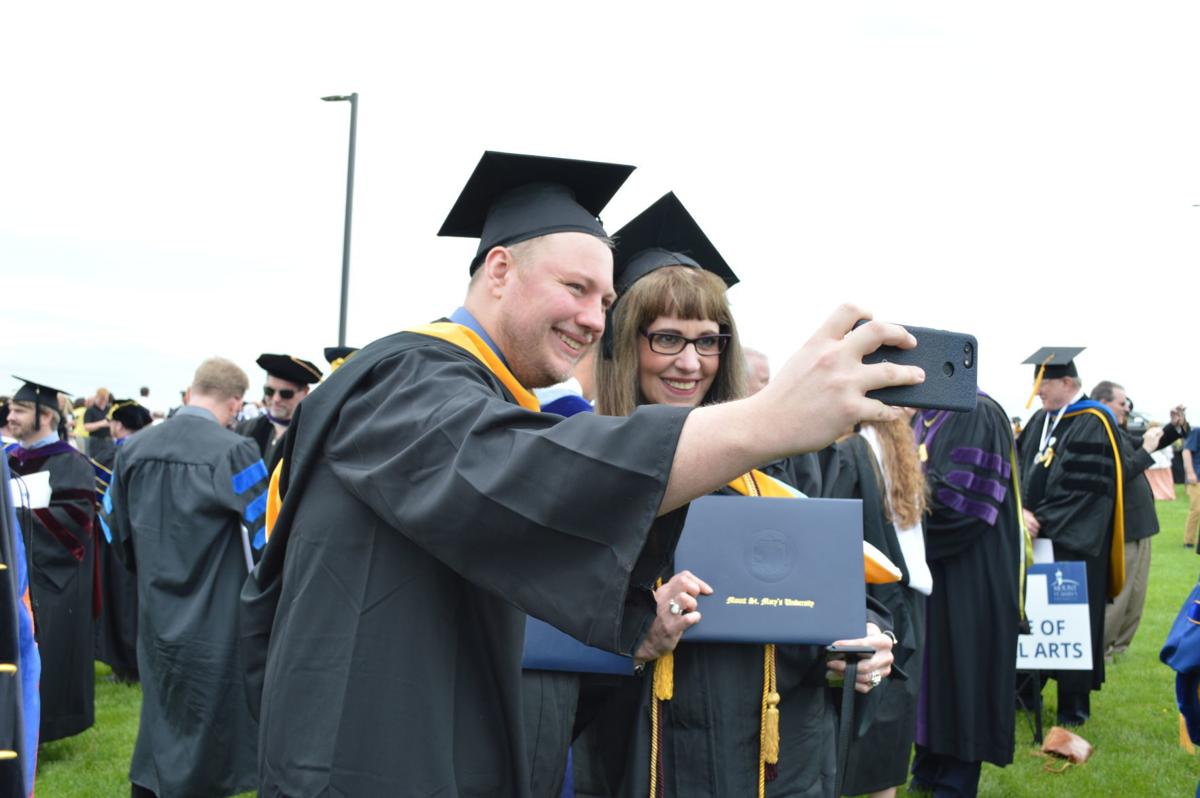 Jacob Vacura takes a selfie with his mom, Jody, after they both graduated with bachelor’s degrees from Mount St. Mary’s University on Saturday. 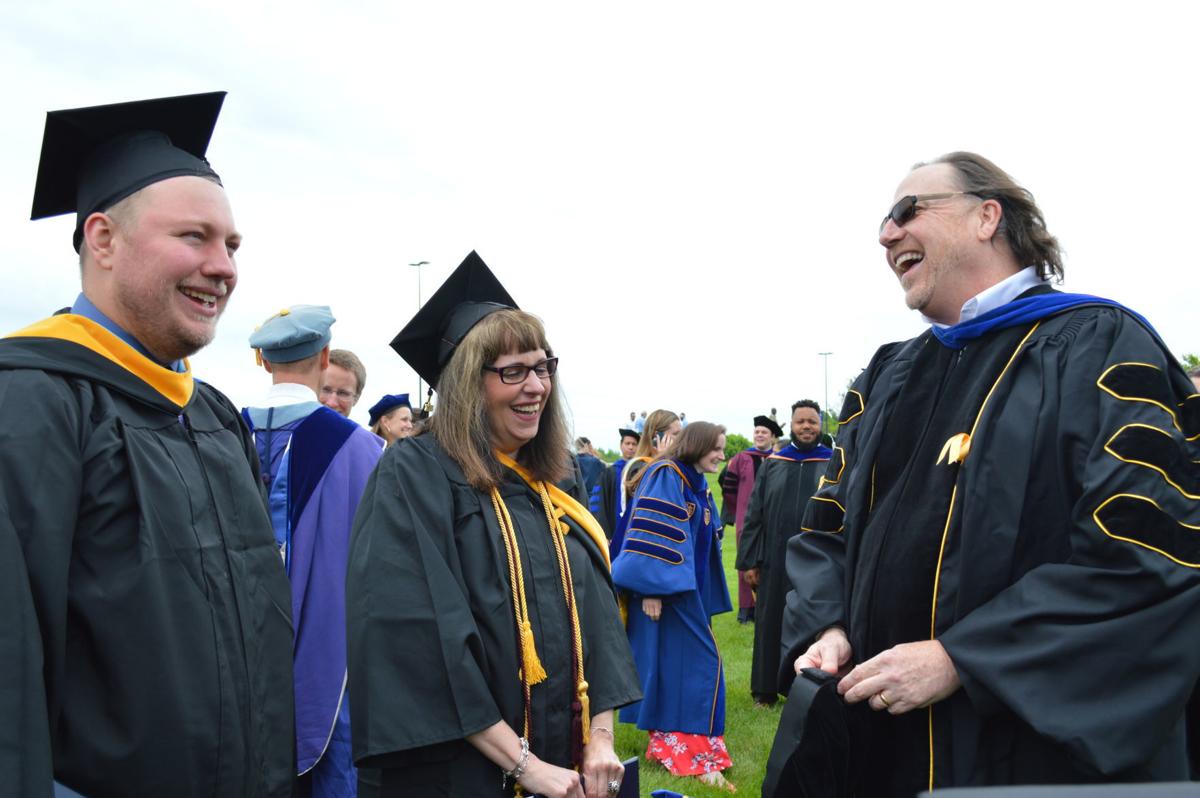 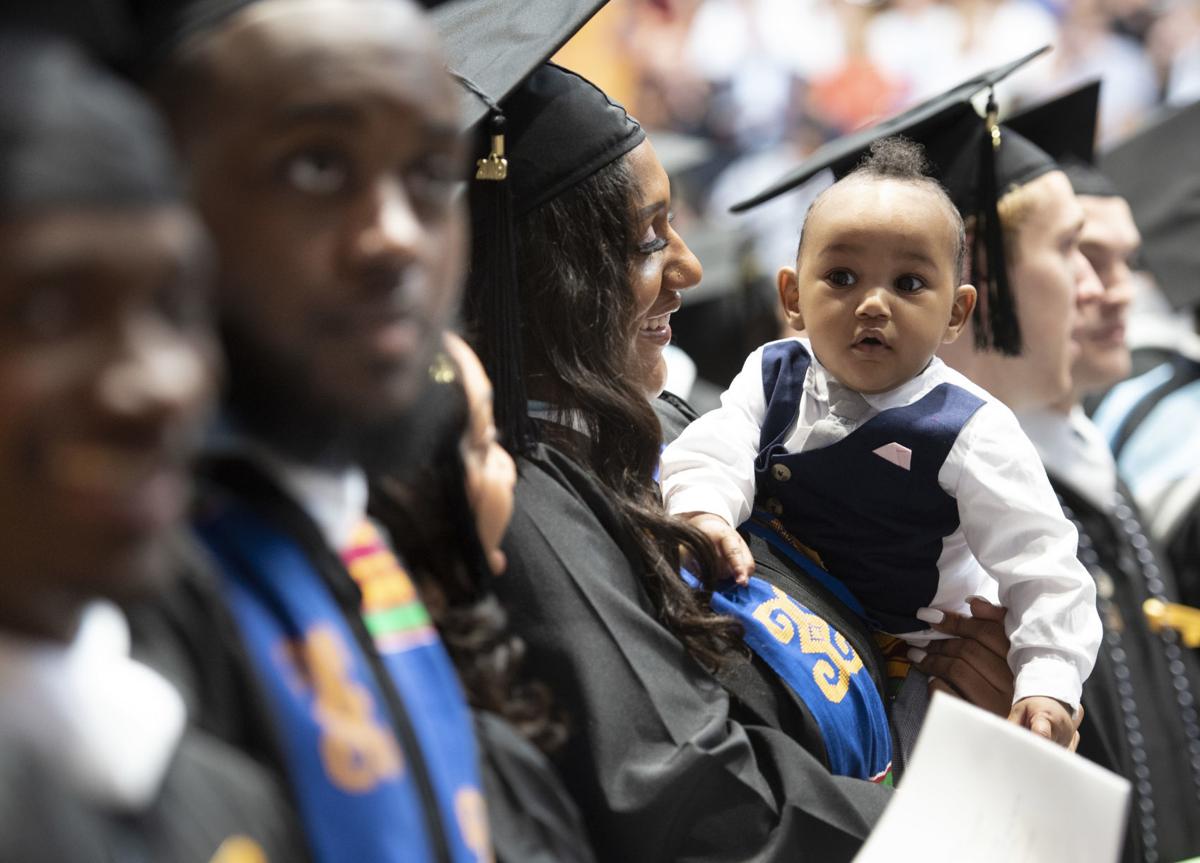 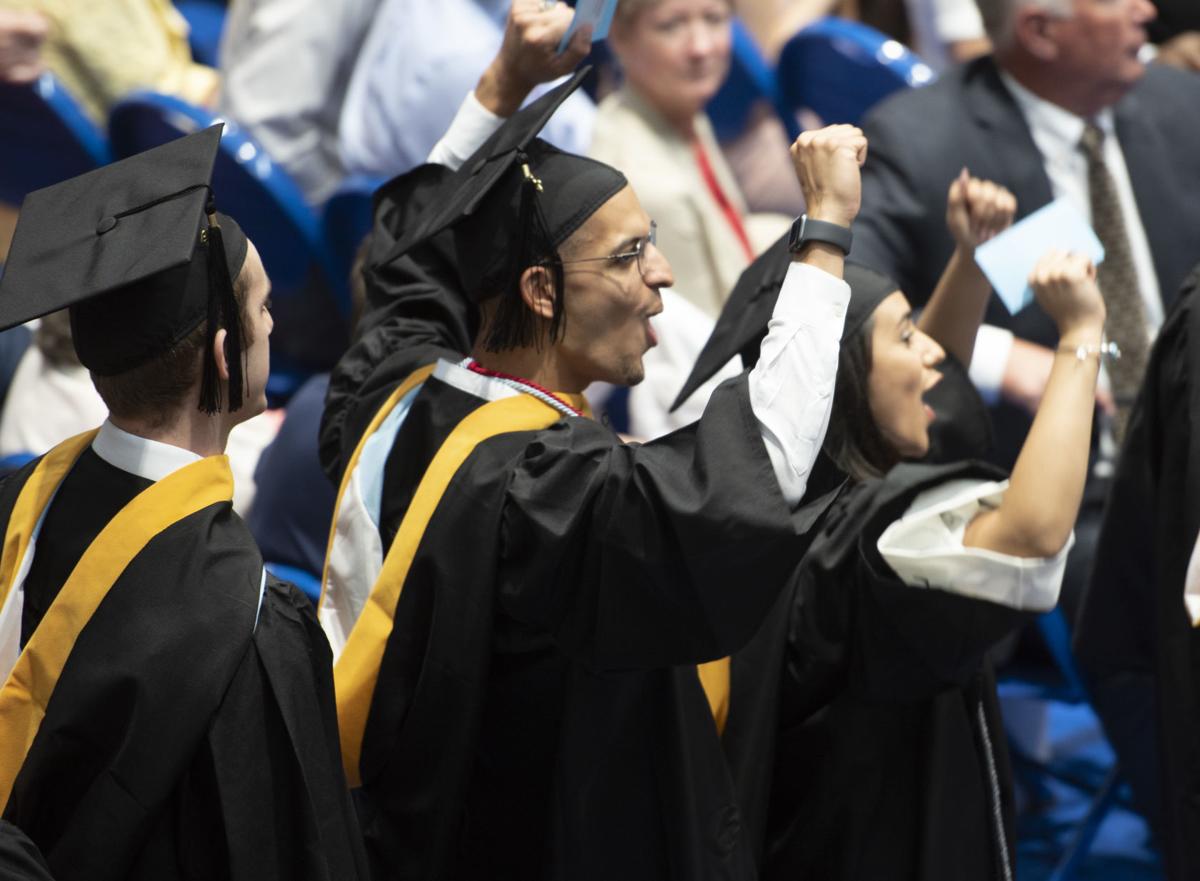 Graduates celebrate as they process into the arena for Mount Saint Mary’s University’s commencement Saturday. 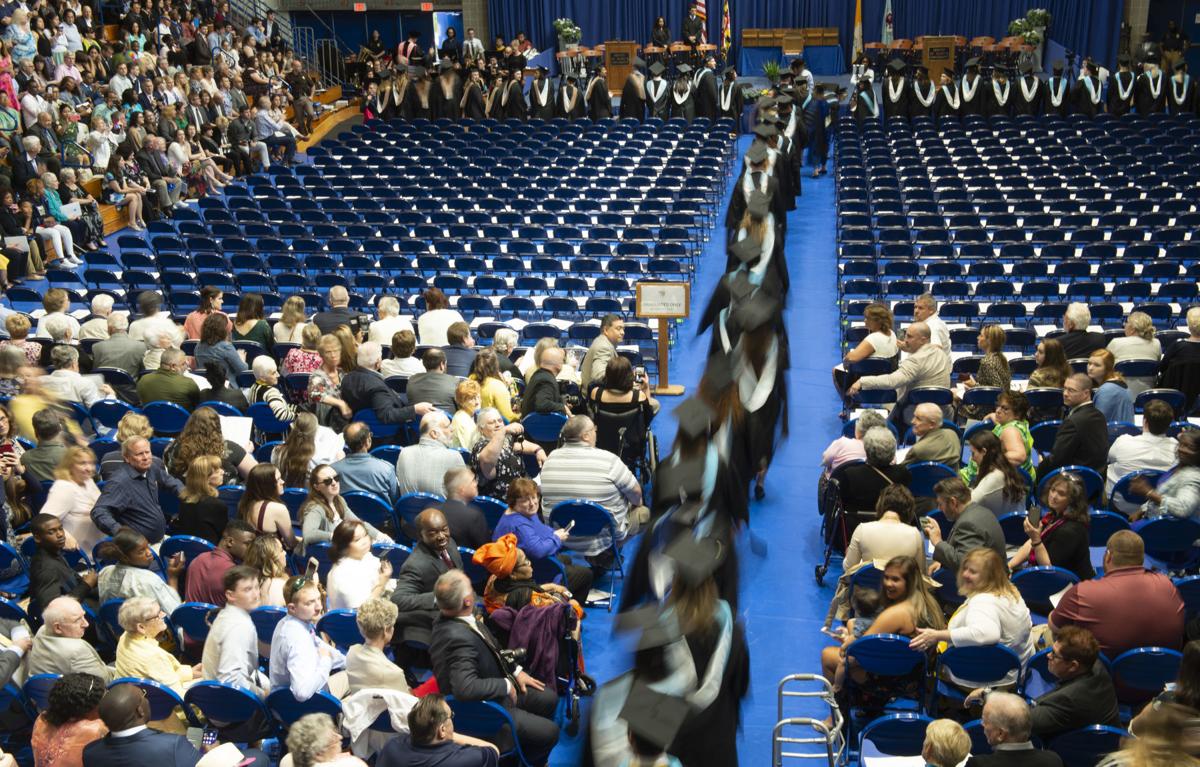 Graduates file into the arena at the outset of Mount Saint Mary’s University’s commencement Saturday.

Jacob Vacura takes a selfie with his mom, Jody, after they both graduated with bachelor’s degrees from Mount St. Mary’s University on Saturday.

Graduates celebrate as they process into the arena for Mount Saint Mary’s University’s commencement Saturday.

Graduates file into the arena at the outset of Mount Saint Mary’s University’s commencement Saturday.

It was the 211th commencement ceremony at Mount St. Mary’s University on Saturday but an extra special day for Jody and Jacob Vacura.

The mother and son duo were graduating together, both receiving bachelor’s degrees.

Jody started her college career after high school in 1983, “so I’ve been going on and off forever.”

Both mother and son studied through the college’s adult undergraduate program at the Frederick campus.

“It was a life-long dream to finish my degree,” she said. “I never thought I’d finish my bachelor’s and now I think I’ll go on and maybe get my master’s.”

Mount St. Mary’s graduation was held at the school’s Knott arena and was filled with 615 undergraduate and graduate students who received their diplomas.

One diploma went to the family of Michael Guckavan for a Bachelor of Science in Mathematics. Guckavan died in the fall from a virus, according to Donna Klinger, director of public relations and communications for the college.

Undergraduate Elizabeth O’Hare was the Edward J. Flanagan Memorial Prize winner, the university’s highest honor, and spoke to the audience about joy and happiness. She said joy is a choice and through trials and tribulations, students can choose to find the joy and smile in every situation.

“I had to find joy in doing the dishes, in finishing the lab report,” she said. “And once I learned to find joy in these little things, it became easier to find in pain and suffering.”

She added that it all starts with a smile.

And moms like Jody Vacura weren’t the only ones smiling to receive their diploma. Jazzmine Alston was as well.

Alston, who received a duel degree in criminal justice and sociology, bounced her six-month-old son, Daquan, on her lap as she sat among her fellow graduates in her cap and gown. She received her diploma on stage with Daquan in her arms.

She was supposed to graduate in 2018 but ended up taking a semester off to care for her son. Once she went back to school, she commuted from Baltimore one to two times a week, with Daquan, to attend classes.

“He put a fire under my butt to finish it out,” she said. “I’m a first generation college student. Representation matters, especially in the African-American community where sometimes we don’t always see that. For me to have these memories to give to my son when he’s older meant a lot to me.”

For Jacob and Jody, they didn’t just receive their diplomas together, they once had a class together, Christology — the study of the nature and work of Jesus Christ.

They sat next to each other in class, but not by Jacob’s choice.

“I would sit down next to my friends in the class and she would just happen to be in the row right behind me,” Jacob said.

Through out their studies, Jacob and Jody always wondered who would graduate first. While they graduated on the same day, Jacob made a point that he walked across the stage and received his diploma before his mom had her turn.

Jacob, knowingly a little behind his mom in credits, took five classes a semester and four over the summer to make sure he graduated before or with his mom.

“He wasn’t going to let me get done ahead of him,” Jody said.

“I think it’s because I went slow and steady,” Jody added.

And while they both plan to obtain their master’s degrees, which they joked would be another race to the finish line, they haven’t decided which schools they will be applying to. Attending the same school hasn’t been ruled out.

But Saturday, a day ahead of Mother’s Day, Jody basked in the experience of reaching a milestone with her son.

“It’s truly wonderful,” she said. “I think it’s the coolest thing. It’s an experience I hope Jake will never forget.”

“She’s been telling everyone,” Jacob added. “Everyone knows, mother and son graduating.”

But it’s more than just graduating for Jody, it’s seeing her son graduate college — a day she looked forward to for a long time as a mother.

“When he walks across the stage at that moment I’m not going to be a fellow graduate,” she said. “I’m going to be a mom who’s so happy because I knew he could do it and I knew some day he would be a graduate.”

Congrats to you both! Well earned!