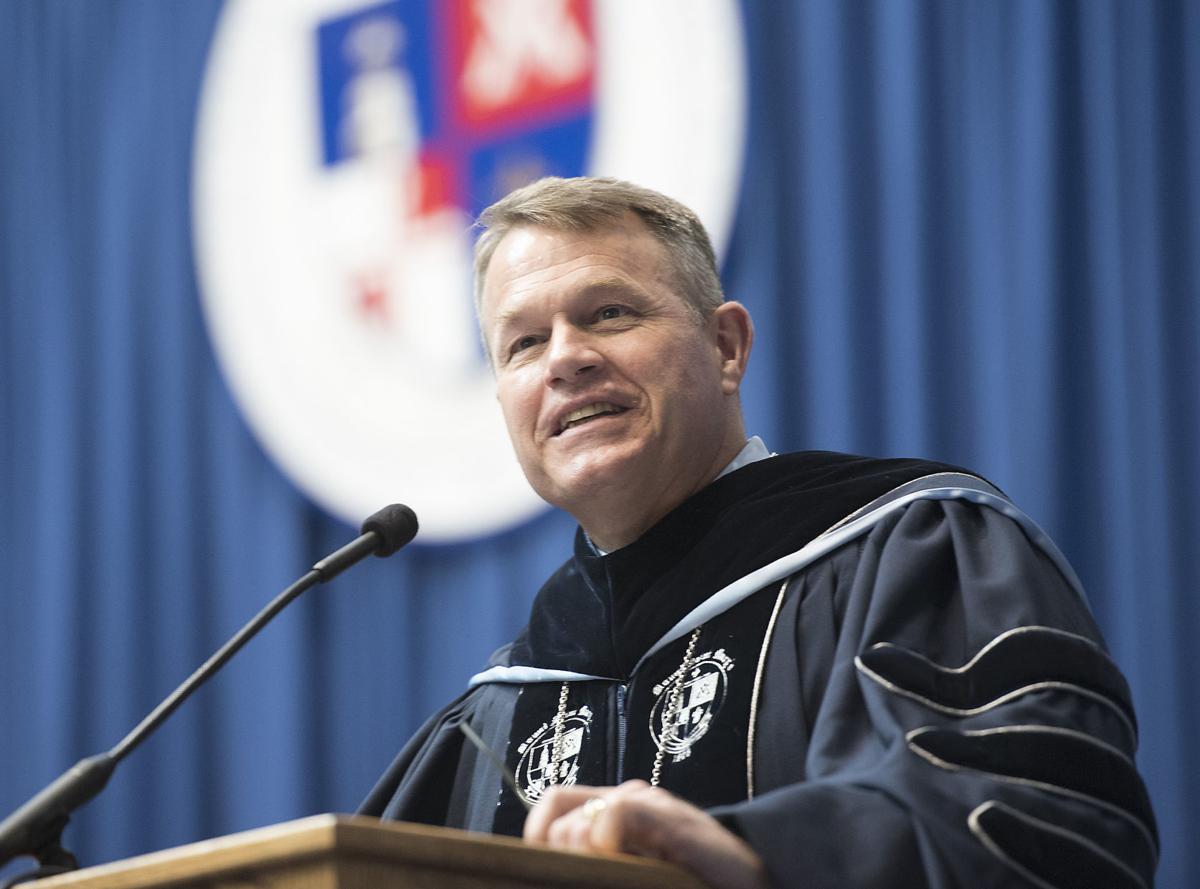 Mount St. Mary’s University President Timothy E. Trainor addresses graduates during commencement exercises in May 2018. Among other things, Trainor has decided to hold off on graduation this year until students can return to campus for an in-person ceremony. 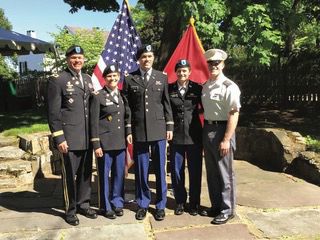 Mount St. Mary’s University President Tim Trainor and his family, Donna, Dan, Cory , and Zach Trainor, all of whom served in the military. Trainor has drawn on his 33-year military career to help him navigate the COVID-19 response on campus.

Mount St. Mary’s University President Timothy E. Trainor addresses graduates during commencement exercises in May 2018. Among other things, Trainor has decided to hold off on graduation this year until students can return to campus for an in-person ceremony.

Mount St. Mary’s University President Tim Trainor and his family, Donna, Dan, Cory , and Zach Trainor, all of whom served in the military. Trainor has drawn on his 33-year military career to help him navigate the COVID-19 response on campus.

For more than 30 years, Timothy Trainor got up every day and went to work for his country. He did tours in Bosnia and Iraq, parachuted out of helicopters over Honduras, and taught young service members as a professor and chief academic officer at West Point Military Academy.

What Trainor didn’t know though, was how his 33 years in the U.S. Army would prepare him for an unexpected disruption to the life of the university he took over in 2016.

When COVID-19 first began to creep into Frederick County in early March, Trainor made the decision to send students home out of an abundance of caution for their health and safety, but he admits that at the time there was no anticipation for how long the closure would last.

“We sent students off under the assumption that they would be able to come back at some point,” Trainor said. “But you continue to be flexible ... and adapt to the situation. We just try and keep our focus on enabling the students to succeed.”

Student success seems to have been a top priority for the Mount from the beginning. The university typically holds a majority of its classes in person and on campus, but six days after sending students home, almost every single class had been transitioned online.

“The thing I was so proud of was how fast we pivoted to the remote learning environment,” Trainor said.

The ability to make quick decisions in times of instability and take swift action, such as the pivot to remote learning, is something Trainor attributes to his military background.

“In the Army, you deal with a lot of uncertainty,” Trainor said. “It’s important ... to give direction fairly quickly and set a path for the future.”

Trainor has had to make some tough decisions in the past two months though, especially regarding the finances of the university.

Mount St. Mary’s announced in March that they would credit students for unused rooms and meal plans and Trainor said the financial impact of not having students on campus has been “considerable” and one of the most challenging aspects of running the university during this time.

But drawing on his military training of making quick decisions, Trainor said he decided early on that he was going to continue paying hourly workers of the university, especially those who cannot do their jobs in remote environments, through the month of June.

“The important thing to me was to give people certainty about their economic environment for the next few months,” he said.

When asked how he was looking forward, Trainor drew on another pillar of his military training — planning.

“When you really plan for and think about the future, it enables you to be more agile as things change because you’ve already thought about some of the possibilities that might happen,” he said.

He employed that strategy early on regarding commencement for the class of 2020. A committee was formed, which included members of the graduating class, and they made the recommendation that the university not hold a virtual ceremony, and instead delay it until they are able to hold something in person — even if that means over the course of several days and in small groups.

“Where they could come back [to campus] and get together with their friends and so that they could celebrate,” Trainor said.

For the coming months, planning means thinking about the incoming freshmen and how to introduce them to the university, and of course, the big decision of what to do about the fall semester.

Trainor said the university is planning for a number of scenarios and is prepared to be flexible with students and families and what they feel comfortable doing.

Rght now, the most plausible scenario is one where the university is open, but with restrictions, Trainor said.

“What I expect is we will have some students living on campus, maybe not all, and students in classes having social distancing,” he said.

Students who are not on campus would continue to join classes virtually. Trainor said a final decision about the fall semester would come in early July.

Until students are able to come back to campus, though, he will continue giving weekly updates to the community and prioritizing student success and health and safety because that’s the “mission,” the retired Army general said.

“We’re going to figure out how to continue to deliver our mission.”