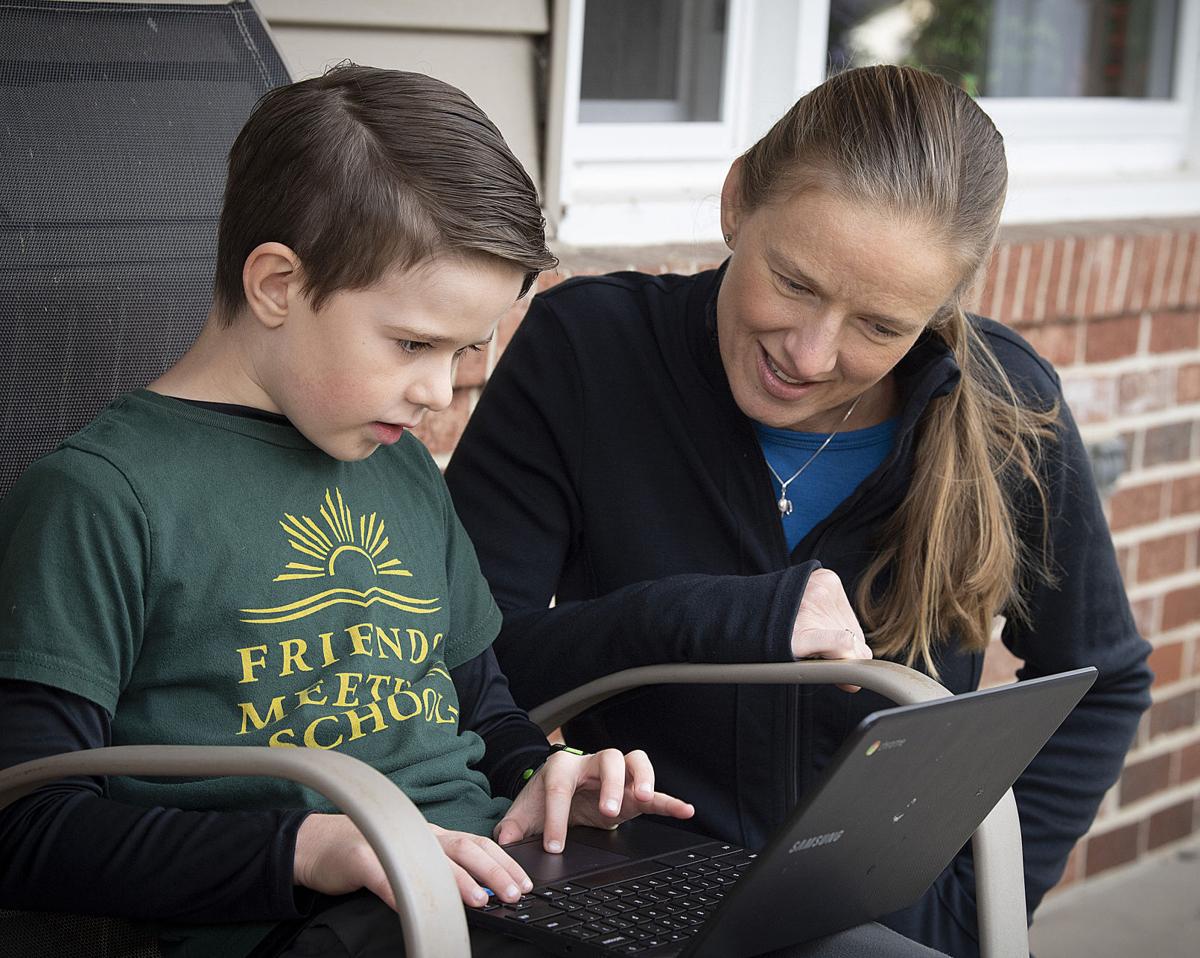 Petra Garosi and her third-grade son, Dominic, look at his Chromebook before going out for a bike ride and walk that gives Dominic credit for a fitness lesson. Dominic and his sister attend Friends Meeting School virtually from their home near Clarksburg. 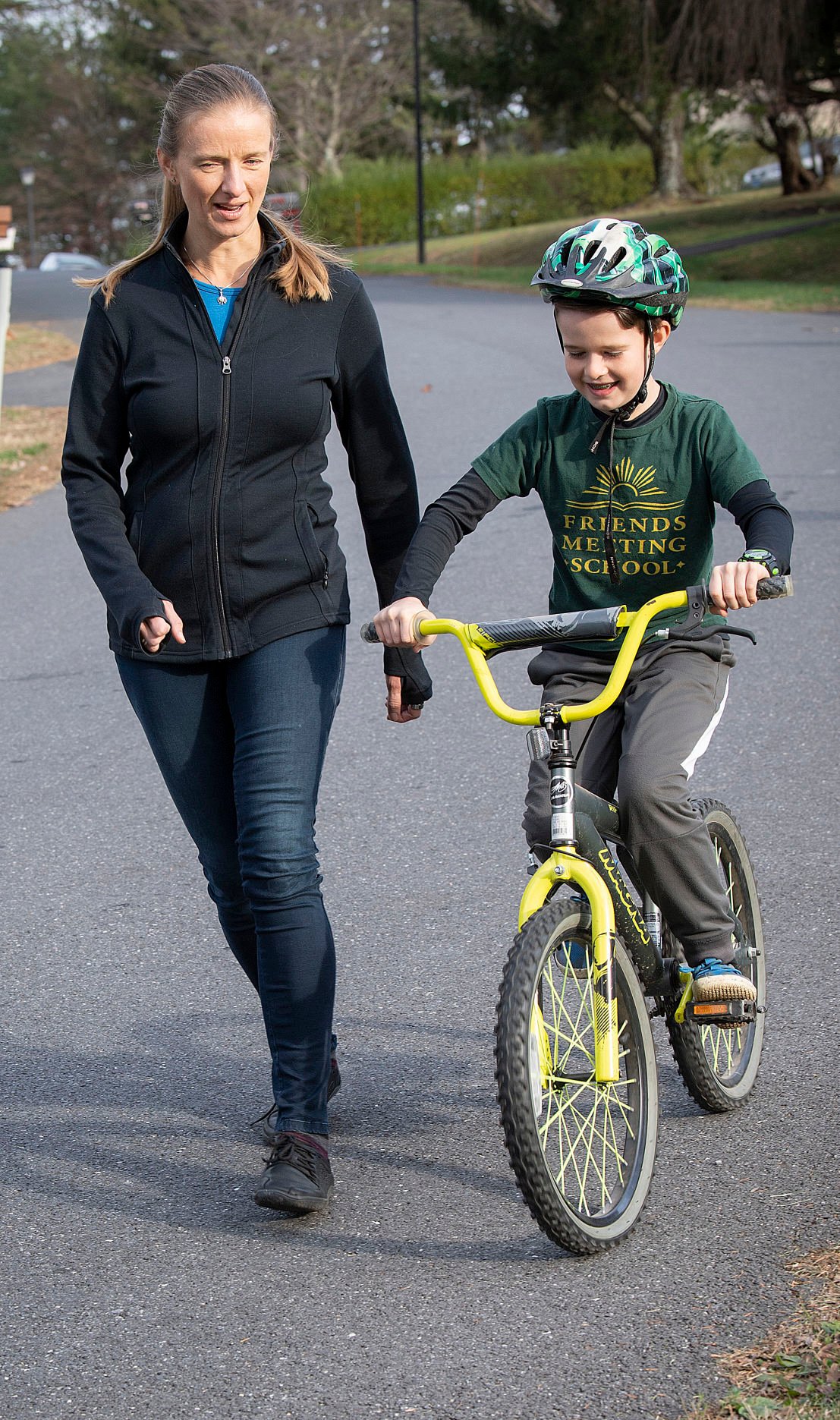 Petra Garosi and her third-grade son, Dominic, travel though their Clarksburg-area neighborhood for an outing that will give Dominic credit toward a fitness class. Dominic and his sister attend Friends Meeting School virtually from their home near Clarksburg.

Petra Garosi and her third-grade son, Dominic, look at his Chromebook before going out for a bike ride and walk that gives Dominic credit for a fitness lesson. Dominic and his sister attend Friends Meeting School virtually from their home near Clarksburg.

Petra Garosi and her third-grade son, Dominic, travel though their Clarksburg-area neighborhood for an outing that will give Dominic credit toward a fitness class. Dominic and his sister attend Friends Meeting School virtually from their home near Clarksburg.

While Frederick County’s public schools have struggled to reach a decision regarding reopening, Friends Meeting School has been smoothly shifting gears and transitioning its students between virtual and in-person schooling every time the metrics change.

Friends Meeting School (FMS) is a Quaker school located on a 54-acre campus in Ijamsville. It currently has 91 students enrolled in kindergarten through 12th grade.

The goal has always been to get students back in the classroom, and over the summer, school officials decided to bring students back using a tiered approach, said Chris Kimberly, Head of School.

“We firmly believe that kids learn best in person...and one of [FMS’] greatest assets is the strength of its community and the supportive nature of it, none of which can happen — or it can’t happen well at all — in the virtual setting,” Kimberly said. “So that prompted us to think about how can we make this work, if at all, safely.”

To start, general safety precautions were enacted. When the school is open, staff and students must complete daily health check-ins before arrival. Hand washing is practiced almost every hour, students have their own kit of supplies, and the sprawling outdoor campus is utilized as often as possible.

On Sept. 1, the first day of classes, students in the Lower School (kindergarten through fourth grade) were allowed to come to campus. Three weeks later, middle school students — in fifth through eighth grade — were brought back. High school students are set to be brought back in December at the earliest.

The in-person environment for grades K-8 did not last for long, though. On Oct. 20, the school shifted back to full virtual learning.

But it is this swift decision-making and monitoring of the county’s health metrics that seem to have prevented FMS from experiencing even one positive COVID-19 case this semester.

Kimberly said that over the summer there was little guidance from state and other high-up organizations on what to do for the start of the school year, so he began doing his own research. In consultation with staff and the school’s Board of Trustees, Kimberly developed a threshold of community spread that would prompt a change in the learning model.

The threshold was set at a 5 percent positivity rate and 10 cases per 100,000. If the county passed either of those metrics, an automatic switch back to virtual learning is prompted. The only way to resume classes in person is if there are three consecutive days of metrics below the threshold, Kimberly explained, at which point the school would make plans to bring students back the following Monday.

Since Oct. 20, the school has returned once to in-person classes. It reverted back to virtual learning on Nov. 2, when health metrics once again increased. The school remains in a virtual learning mode for the time being, and Kimberly said staff is reviewing the latest research to determine when students can return to campus.

Annie Garland, director of admissions and outreach for FMS, said what has made the transitions so effective is parent involvement and transparency from the school.

Parents knew from the outset that switches could happen, and they were prepared for it. Garland did admit, however, that it has still been difficult for some families of students in the lower school, particularly families who are new to FMS this year.

Due to difficulties that other schools across the county were experiencing regarding reopening, FMS saw a huge increase in the volume of applications this year, Garland said. The school admitted 24 new families, most of which have students in the lower school.

“It just spoke to what they needed with their age and development. And what was fortunate for us and a great benefit was our campus. We have a lot of space...so we have a lot of different opportunities that maybe other structures and models may not have at their fingertips,” Garland said.

Those families had a desire for their child’s schooling to be in person, so the switch back to virtual learning was not always fully accepted in the beginning.

“We were really transparent through the process, of what could happen...but I think what happens is because [in-person] is the need and the desire...I think it always comes as a shock especially because we’ve gone this far into the school year in-person and then boom this change happens,” Garland said.

Kimberly added they always give parents the option to voice their concerns and perspectives with school staff once they give virtual learning a try for a few days.

“One thing we do really well is listen to our families,” he said.

Petra Garosi has two children enrolled at FMS—one in the lower school and one in the middle school. She appreciates the school being up-front about possible changes to the learning model. It has helped her set expectations for her children and transition them easily when it happened, she said.

Online schooling is not the same, Garosi said, but the fact that both her kids got some time in the classroom seems to have helped.

“I’m glad that they had the time in person...to form those bonds. Now that they’re online again, it’s challenging, but they’ve built those relationships and... they’re in a nicer rhythm,” she said.

“It’s been fun because I’ve been in person the whole year, but now it’s easier to do online school than it was in March, so I think that’s been better. I like seeing my teachers and friends again,” he said.

Isabella Griffith, a new eighth-grade student to FMS, also said she appreciates the time she got in-person at the school, even though it was cut short.

“I noticed that [online learning] wasn’t as hard as when I first started because now I know the teachers better, and I know the work and how we’re doing the work, and I also have friends to help me,” she said. “I still really want to go back to in-person school because that was definitely a lot more fun and easier to do.”

There seems to be a level of understanding among all at FMS that the school is doing all it can to keep everyone learning while also keeping everyone safe.

When asked if teachers had any issues returning to school at the beginning of the year, Kimberly said there was some anxiousness, but it faded once staff actually set foot on campus.

“The anticipation of what it would be like to be on campus proved to be far greater than the reality of it,” he said.

Humaira Ahmed, dean of the Lower School, said what made teachers comfortable with returning was that the school made sure to address their safety needs and concerns first.

“We took care of the necessary and then we were on board,” Ahmed said. “Our teachers in the lower school, they were dying to come back on campus. We missed our kids; we missed our homerooms and being in-person.”

Regarding academics, both Kimberly and Ahmed said there was a decision made to focus on keeping students happily learning this year instead of trying to tick off curricular objectives.

Moving forward Kimberly said there could be some changes to the set threshold.

“I’d love to have that crystal ball to be able to predict what’s coming our way but...the virus is here for a while and likely will carry on into the next school year so I think it’s critical for us to be having a long-term view about it,” he said. “We recognize that having students in-person is best for them and we are recognizing that our measures are keeping them safe so we may be looking to adjust some of our thresholds to recognize that.”