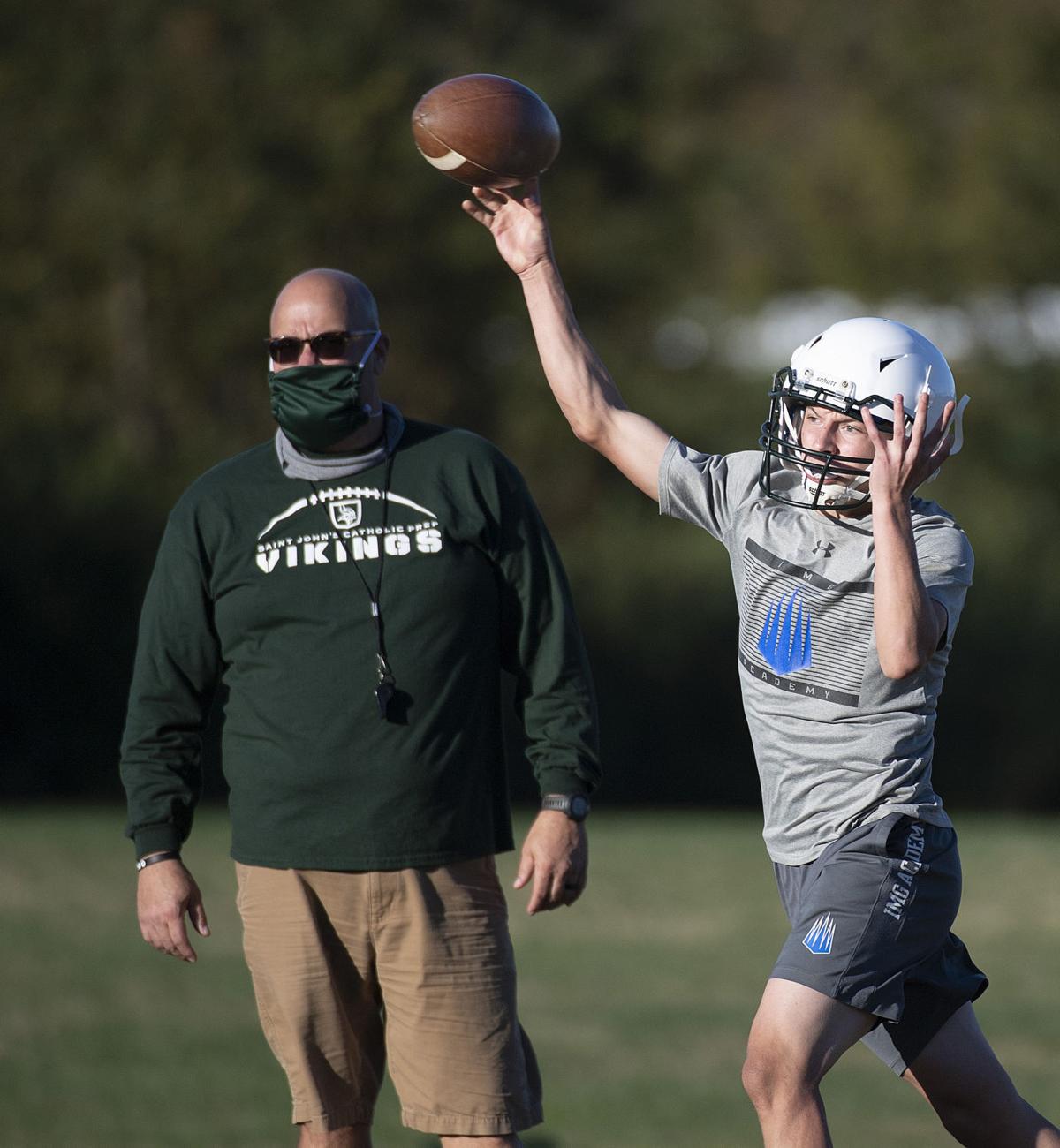 Coach Daryl Hayes watches as Griffin Sheridan, right, a St. John’s Catholic Prep quarterback, throws at a workout last month before the Vikings were given the go-ahead to hold a 2020 fall season. 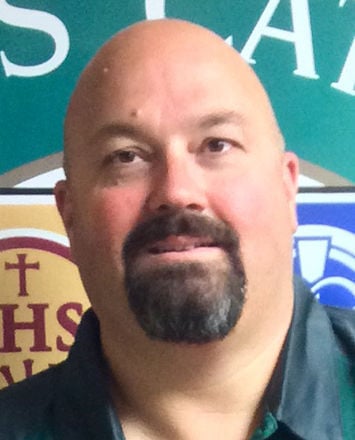 Normally, it's the kind of game every Vikings coach and player would rather forget. Instead, it may well go down as one of the most inspirational games in St. John's football history.

That's because during the second half, Hayes continued to coach after suffering a heart attack, finishing out what could prove to be his team's last game of a season that started late and might end earlier than expected because of the coronavirus pandemic.

Hayes' heart attack, which apparently began at halftime, was caused by a blood clot that lodged in an artery that connects to his left ventricle. The clot blocked about 99 percent of the artery, according to the coach's wife, Kelly Hayes.

Daryl Hayes, a Martinsburg, West Virginia, resident, was treated after Saturday's game at the University of Maryland St. Joseph Medical Center in Towson, a facility located a couple miles from Concordia's football field. Doctors cleared the blockage and inserted a stent.

After spending Saturday and Sunday in ICU, Hayes was discharged from the hospital Monday. Kelly Hayes said doctors didn't expect Hayes to have any lingering damage from the attack.

"He is lucky to be alive," Kelly Hayes said on Sunday. "We really dodged a bullet. It was too close of a call for my comfort, but he made it through. That's a relief."

After feeling chest pains that grew gradually worse as the second half progressed, the 48-year-old Hayes eventually experienced numbness in his left arm and part of his left leg. That didn't cause him to leave the sidelines, however. Kelly said the coach took the grit-and-bear-it approach.

"He's a tough guy, and he loves this game. For a lot of these kids, this may be their last football game of the season," Kelly said. "It's been such a horrible year anyway, I think he just was determined to finish the game he loved. I'm just glad he survived it."

Like SJCP assistant coaches and players, Kelly had no clue Hayes was dealing with a life-threatening event during the game. She did notice his trademark energy flagged near the end of the game but figured that might've been caused by his team's struggles against Concordia.

In fact, after a postgame meeting with his players, Daryl Hayes even took time to be interviewed by a reporter. Meanwhile, Kelly stood near the edge of the field after being summoned by SJCP athletic director Pete Strickland.

"Pete Strickland just said, 'Hang on, he's doing an interview with a reporter, I've got to pull him away,'" Kelly said. "He literally just ended the interview and said, 'You're going with your wife to the hospital right now.'"

While his wife parked the car at St. Joseph Medical Center, Daryl Hayes walked into the ER, a detail that later amazed doctors, considering his condition. The coach's players, though, probably aren't as surprised by such fortitude.

Literally, as it turned out.

"In fact, I remarked to another coach last night after the game that he seemed the calmest he had ever been coaching," O'Rourke said. "He's quite animated, he's passionate. You know, he's a football coach."

In hindsight, that uncharacteristic game-day calmness seems like a hint that Hayes was dealing with a health issue.

As the second half progressed, though, emerging symptoms began to suggest it was something more serious.

"For Daryl, it just felt like regular chest pain that got worse and worse," Kelly said. "He told me later he didn't really get spooked until his left arm and part of his leg started going numb."

Hayes had bypass surgery in January 2018. That's why he had a case of nitroglycerin pills in his pocket during Saturday's game. Caught up in coaching, though, he didn't take the pills. That lack of action, which normally would've angered Kelly, might've saved the coach's life.

"Thank God he didn't take that medicine because it would've opened up all the vessels really wide, which is what it does to increase blood flow," Kelly said. "And that would've probably, the doctors said, increased his chances that that blood clot would've traveled up to his brain and could've potentially caused a major stroke or an aneurism."

Looking back, Kelly's glad she didn't suspect her husband was having heart trouble.

"I probably would've made him take the nitro, and we'd be in a totally different situation," she said. "It all worked out. It was a real miracle."

There was other relatively good news. Since a clot caused the heart attack, Hayes can use anticoagulants and other treatments to deal with this issue instead of facing another surgery.

Also, Hayes' history as an athlete and lifestyle changes he made after having bypass surgery, such as eating healthier, left his heart in better shape to deal with an attack like Saturday's.

"The doctors said they could tell that he was an athlete because his heart muscle was so strong and can endure a lot," Kelly said. "They're saying that there won't be any permanent damage."

Kelly wasn't the only member of Hayes' family at Saturday's game. Their sons, senior Nate Hayes and sophomore Josh Hayes, play for the Vikings.

Saturday's game could turn out to be the last of the season for the team. While St. John's (1-2) hopes to add teams to its schedule after seeing other games get canceled due to the virus, it remains to be seen if Vikings seniors will ever get to play football again for the school.

"For [seniors], it was already an emotional game, they were hugging each other, some were crying," Kelly said. "It was a big deal because it was the season that almost never was, and in some ways, it felt like a lucky season, to even get a few games."

Because of the pandemic, St. John's didn't play its opener until Oct. 31, when it lost to St. Michael the Archangel 41-8. The following week, the Vikings beat nemesis Annapolis Area Christian School for the first time in nearly four years by pulling out an uplifting 22-21 victory.

And Saturday's loss at Concordia was easily overshadowed by Hayes' heart attack, how he didn't let it stop him from coaching and how he survived what could've been a perilous situation. Kevin O'Rourke, in an email to The Frederick News-Post, called it "an amazing victory" for the Vikings.

Kelly Hayes was touched by such sentiments as well as the concern Hayes' assistants showed for her husband.

"We'll have a lot to be thankful for this Thanksgiving, that's for sure," Kelly said. "It was harrowing for me, I'm not going to lie. But it's a nice outcome after a hard season."

What to do if you're having a heart attack

A heart attack happens when a part of the heart muscle doesn’t get enough blood.

The more time that passes without treatment to restore blood flow, the greater the damage to the heart muscle, according to the Centers for Disease Control and Prevention. The chances of surviving a heart attack are better the sooner emergency treatment begins, according to the CDC.

Someone having a heart attack may experience any or all of the following:

A heart attack generally causes chest pain for more than 15 minutes, but it can also have no symptoms at all. It's important to be aware that symptoms other than chest pain may occur, such as indigestion or persistent neck or jaw pain. Many people who experience a heart attack have warning signs hours, days or weeks in advance.

What to do if you or someone else may be having a heart attack:

Agree this is a horrible example to post in a positive light...he was incredibly lucky to be alive. If you have chest pain call 911 and stop what you are doing.

This is the stupidest thing I have ever heard. With heart attacks Time is Heart, go to the ER immediately. Stupidity is not admirable.

I agree, Bethl6b. This was not “inspirational” and should not be celebrated.

Time is of the essence with heart attacks (and strokes).

"He just thought it was indigestion." A 40something friend died in a chair alone at home with a bottle of Tums next to him. Breathtakingly lucky someone was there to say, get to a hospital. Then he walked in. And has a history! Well. Maybe someone reading will learn something useful, but was this "tough" or was it serendipity?

I understand why the author admires the coach, but this article's viewpoint is way off. The players look up to the coach, he leads by example. He's just taught his team to ignore serious life-threatening events for a game. I have no admiration for this coach at all, very poor decision making skills. Does he think that dying on the field is the best way to end the season?

That’s not being a hero, that could have easily been a dead father, uncle, brother ot husbsnd. Stupid.

When coaching a losing game is all that matters, this poor decision by a coach might help explain a 53-0 loss. His decision making skills are to be questioned. He is a lucky man.

With that past history, this shouldn't be written like he's a hero. I have some of that history, if my chest hurts, my arm and leg go numb, I'm not really interested in showing my football players or anyone else how you die from being an idiot. He's darn lucky and I wish him a strong recovery and some understanding that some things can't or shouldn't be gutted through. And yeah, I ran plenty of hills in full equipment, so I know this world.