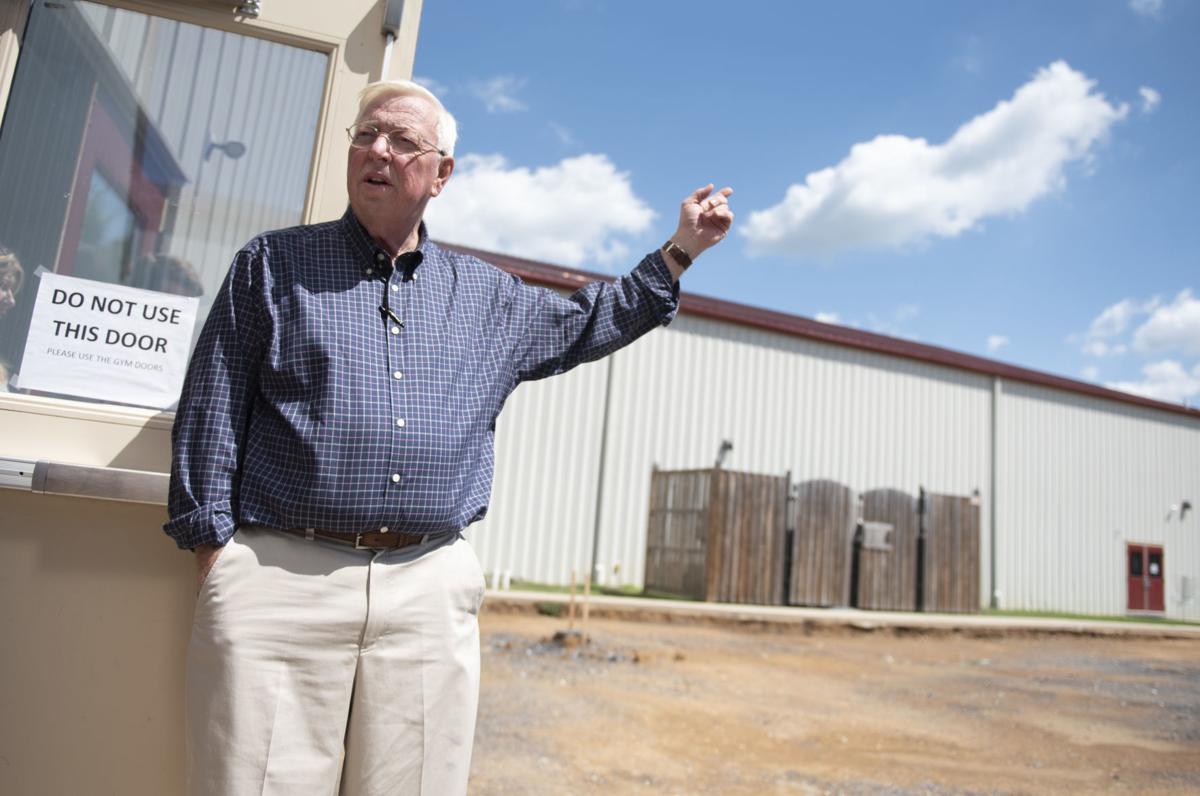 Thomas Powell, president of Saint John’s Catholic Prep, discusses plans for a new classroom building and sports complex during a tour of the campus Thursday. 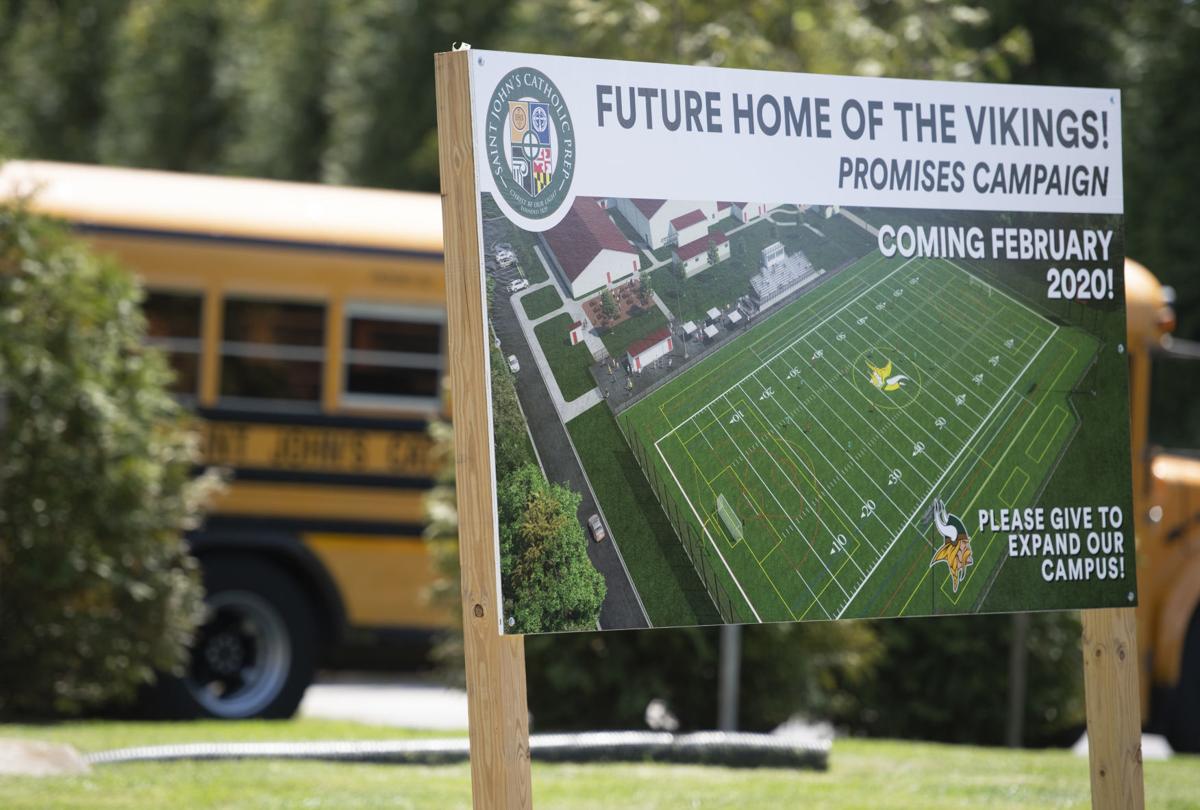 Saint John’s Catholic Prep has plans for a new classroom building and sports complex at its Buckeystown Pike campus.

Thomas Powell, president of Saint John’s Catholic Prep, discusses plans for a new classroom building and sports complex during a tour of the campus Thursday.

Saint John’s Catholic Prep has plans for a new classroom building and sports complex at its Buckeystown Pike campus.

At first glance, as Thomas Powell walked through the halls of Saint John’s Catholic Prep and around some of the high school’s exterior Thursday, things seemed relatively quiet.

But the school will soon undergo multiple construction projects, including a new chapel named for Mother Teresa, athletic field, 10,000-square-foot addition for classroom space, and water and sewer improvements.

The total bill for all those projects is roughly $5 million, Powell said.

The athletic field will be made of artificial turf, and serve 13 different sports, Powell said. Currently, the football team plays at McCurdy Field in Frederick, and other teams play at fields leased by the school at Ballenger Creek Park.

Nancy Fay, the school’s campaign and marketing specialist, said those rental costs are $24,300 annually, and don’t include transportation to and from the school.

Having a true home field with seating for up to 400 people is important, Powell said.

“I think that’s the turnaround project for us,” Powell said. “We have some families who want to send their kids here, but won’t because we don’t have fields.”

School officials hope to have the fields ready by next spring, in time for the school’s lacrosse teams to play there. From start to finish, that project is estimated to take four months.

A $2.5 million fundraising campaign has so far raised $1.5 million.

Powell and others are also hopefully nearing the tail end of improvements to the school’s water and sewer system. Currently, the school is served by a septic system, but there is a county water line across Md. 85 and a sewer line runs near the school.

He thanked a specific county official for assisting with the process.

“As far as I’m concerned, Mike Marschner is the hero of Saint John’s Catholic Prep,” Powell said. “He was instrumental in helping us with full access to water and sewer.”

Marschner, special administrative director in County Executive Jan Gardner’s office, said the county became more interested in the school’s proposal to hook Saint John’s up to the water and sewer system because the school’s current septic system discharges hundreds of pounds on nitrogen annually into nearby tributaries, and eventually the Chesapeake Bay.

The school is in an institutionally zoned area, and a water and sewer amendment was required before the school could pursue a hookup to the county’s lines, Marschner said.

It’s a process that has taken roughly 18 months, he said.

School officials should be able to hook up to the county’s water system in a couple of months.

That includes a chapel named after Mother Teresa, tucked right inside the entrance off the school’s Great Hall. That space will allow up to 35 people to attend mass.

The cafeteria, tucked on the eastern end of the school, will be modernized, Powell said. It will look more like a college campus cafeteria, he said.

And nearby, a plot of land will be used to add 10,000 square feet of space, mostly used for expanding the school’s music and arts programs.

Outside of those projects, a Montgomery County-based solar company is interested in building a 2-megawatt solar array on one pad northeast of the school, according to permits filed with the county’s Department of Permits and Inspections.

Both Powell and Brian Quinlan, president of Calvert Energy — the company interested in pursuing the array — said the land where the array is being proposed is pretty rocky, meaning it’s unlikely any other sort of development could occur there.

Quinlan said the project, if approved, would be part of the state’s community solar program. A nearby distribution line would take the power and put it onto Potomac Edison’s grid, he said.

The community solar program is meant to incentivize more solar development as part of a three-year pilot program statewide, according to the state’s Public Service Commission.

Discussions to install the array are preliminary, Quinlan emphasized.

“It hasn’t been accepted into the [community solar] program,” he said earlier this week. “It’s a twinkle in our eye. It’s nothing more.”

Powell said the school is considering powering some of the school if the project is approved. At a minimum, students would be able to see a readout box showing how much power is generated by the array on a regular basis.

Even without that project, Powell said it’s a busy time for Saint John’s Catholic Prep.

“Are we doing the most construction of any school in the county? I think so.”

How much each project costs

Fundraising efforts have raised $1.5 million out of $2.5 million.