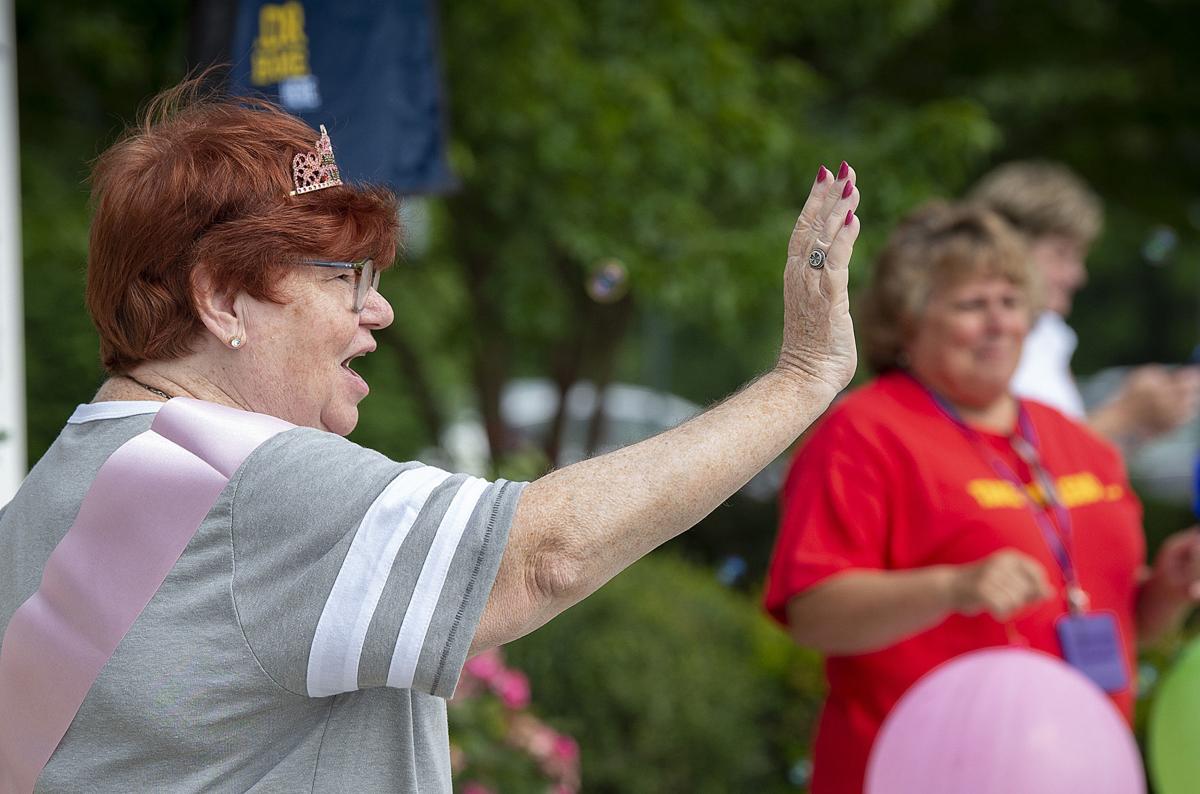 St. John Regional Catholic School principal Karen Smith waves to passing students and family at a parade Wednesday morning. Smith is retiring from her head role at the school after a 40-year career in Catholic education. 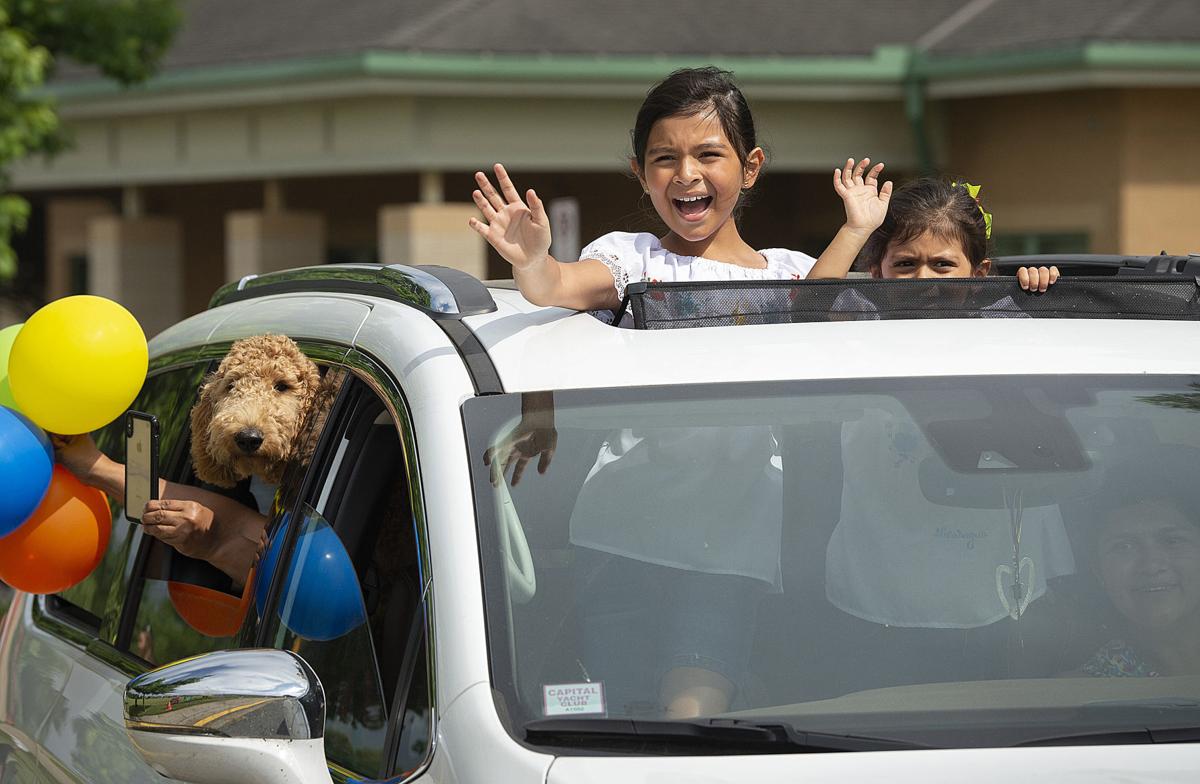 St. John Regional Catholic School students Francesca and Stephanie Chiarmonte wave to the school staff as they pass with their parents through the parade line Wednesday morning at the school.

Principal Karen Smith is retiring from her head role at the school after a 40-year career in Catholic education. She was named principal of SJRCS in 2005 as students and staff were preparing to move to their new school building located on Opposumtown Pike in Frederick.

SJRCS is a private, Catholic primary and secondary school that educate students in grades Pre-K through 8.

Since the move, Smith has led the school to two National Blue Ribbon Awards of Excellence, started a one-to-one Chromebook initiative in grades six through eight, and has added Pre-Kindergarten classes and a “Makers Space” to the school, which has a 3D printer and other modern technology for students to use.

She also started an inclusion program at the school called “PRIDE” for students with learning differences.

“[PRIDE] was very important to me because we were getting people applying but we didn’t have the means to meet all of those student’s needs,” Smith said. “We put in a program ... and were able to hire a special education teacher.”

Meghan Holtz was one of the teachers hired for PRIDE. She has worked at SJRCS for five years and said Smith has been an incredible leader.

“She is so accepting. She’s all about inclusion, she wants to make sure that all students can receive an education,” Holtz said.

But through all the achievements and new programs, the one test Smith never expected to go through was COVID19.

She announced her retirement in February, only a few weeks before the state announced that schools would close.

“It was a little tricky in the beginning...and there are now words in my vocabulary like social-distancing that I’d never even heard before,” Smith said.

Being separated from her staff and students for her final months have been hard Smith said.

Her one “saving grace” however, is her fifth-grade math class which Smith took over teaching after another teacher left unexpectedly at the beginning on the year.

Miller Rouce is one of Smith’s math students.

“At first I was kind of scared because...I only knew her as principal,” Miller said. “But she always made sure that everyone knew everything and nobody fell behind.”

Miller said he knows this is probably not the way Smith wanted to end her career but that he has learned a lot from just a few months with his principal.

“I’ve learned that you need to include everyone and that SJRCS is a safe place where you can learn and feel comfortable sharing,” he said.

Smith jumping in and lending a hand with teaching a class seems to be typical of her work ethic.

Principal of St. John’s Catholic Prep School Will Knotek, previously served as assistant principal of SJRCS under Smith. He said he has never seen anyone work so hard for their students.

“She’s going to be a tough act follow...on the weekends I would pass by the school and the only car in the parking lot is hers,” Knotek said.

Andrea Sommers, a fifth- and sixth-grade teacher at SJRCS, agreed.

“She is one of those people that always responds...she’s the person that after hours, if you have a problem you can contact her and she is on it,” Sommers said.

Sommers has worked at the school since 2007 and said Smith has been an “incredible female leader.”

“I have so much respect for Principal Smith. She’s compassionate, she’s hardworking, and completely dedicated to our school community,” Sommers said.

Smith is looking forward to retirement but is not going to completely leaving the world of education. She plans on teaching a course at Mount St. Mary’s in the fall and advise teaching interns. She will miss her school though and the friendships she’s made over the last 15 years.

“I’m leaving with a grateful heart, yearlong friendships that I hope are going to live on, and I have a love for this school and a love for the students,” she said.

The new principle has an excellent Assistant Principal. He is very responsive, empathetic, trust worthy and loves the students. The school is in great shape!

This woman was the worst adm8nistrator I encountered in 18 years of Catholic education. Hard work does not equal competence. She was unethical, rude, had no manners, is completely un-Christian, and has zero social skills. They can not possibly do worse.

Wow! I'm not even going to directly reply to your rude comment, except to say that my family's interactions with her have been the exact opposite. She loves the kids, and I know how sad she is to be leaving them. She sent postcards to her class this year for Easter, and had a special cookie delivered to them at the end of the school year. My son is sad to see her go, and we wish her all the best on her next adventure!

I wish her the best in retirement. She does love the students.

Cookies and postcards do not equal administrative competence. Even the search committee that hired this woman called her "the best of the worst". That is a direct quote.