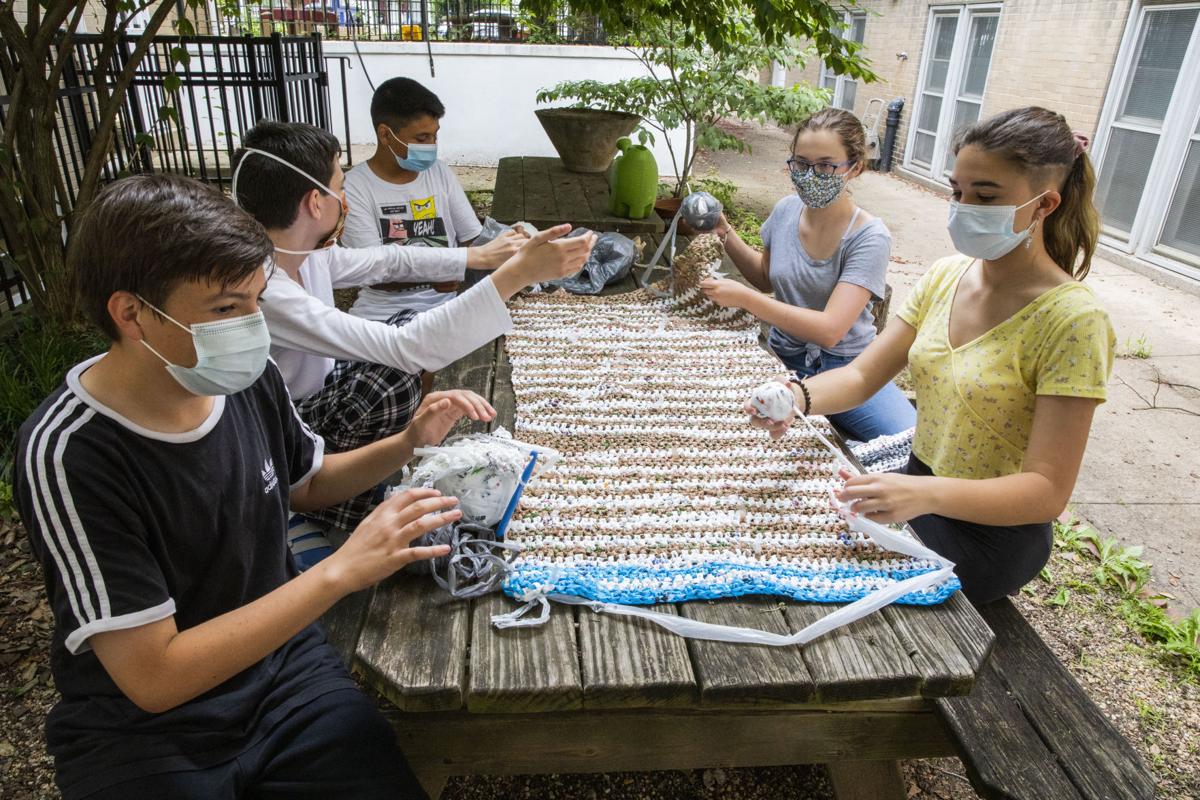 Monocacy Valley Montessori Public Charter School students crochet mats outside on the school courtyard on Monday. The students are creating these waterproof mats from recycled plastic bags for homeless individuals. 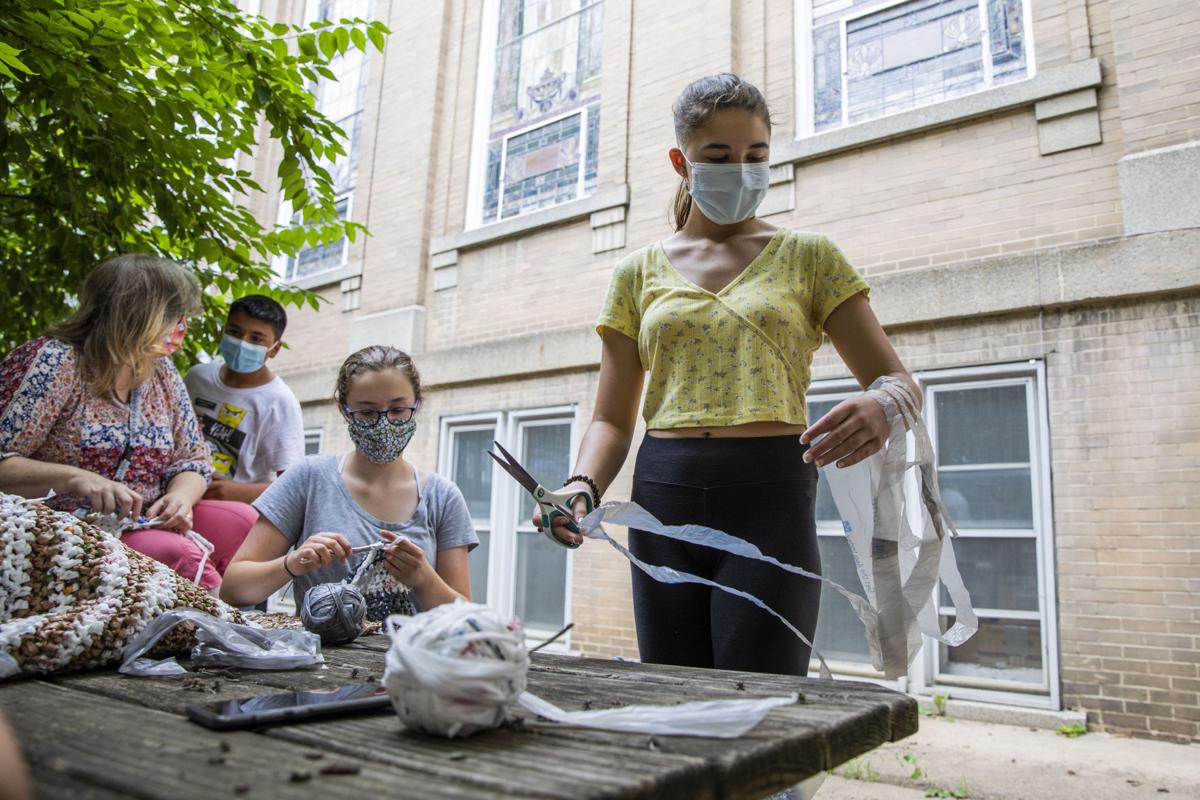 Eliza Best, 13, an eighth grader at Monocacy Valley Montessori Public Charter school, crochets a mat outside on the school courtyard on Monday. 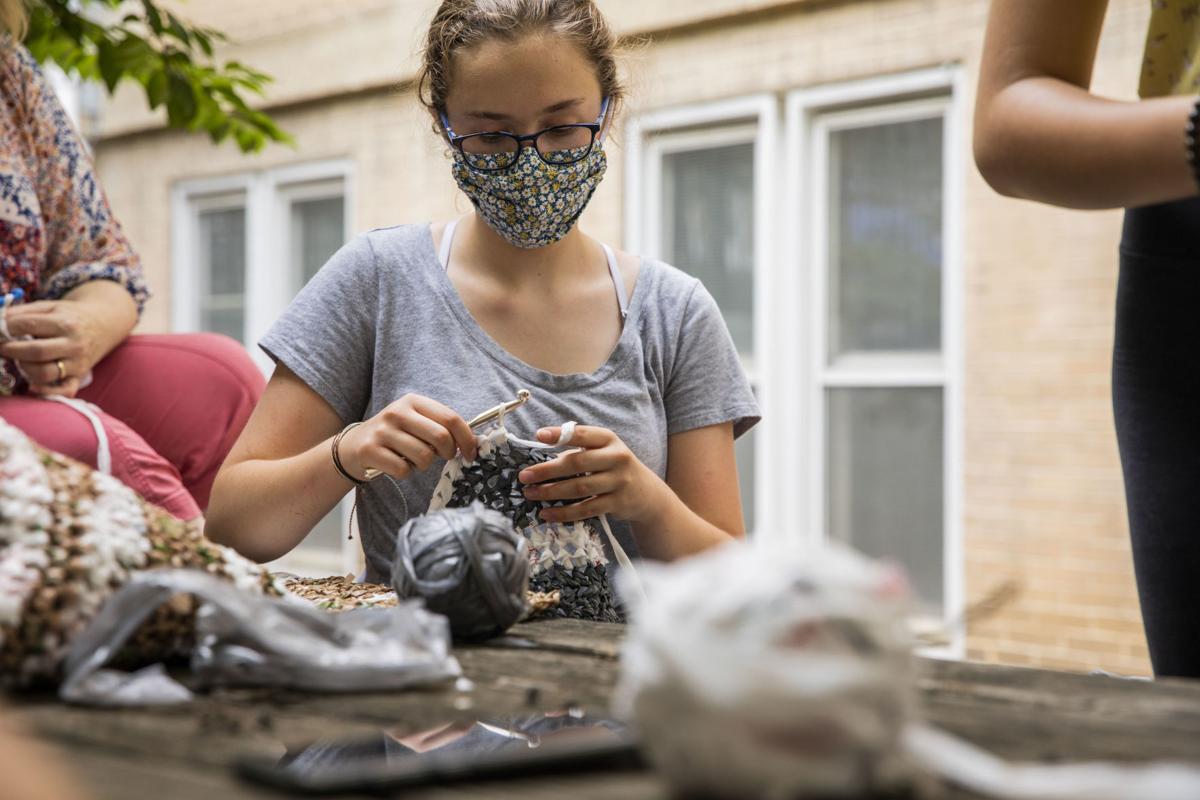 Kara Francis, 14, an eighth grader at Monocacy Valley Montessori Public Charter school crochets a mat outside on the school courtyard on Monday. The students are creating these waterproof mats from recycled plastic bags for homeless individuals. 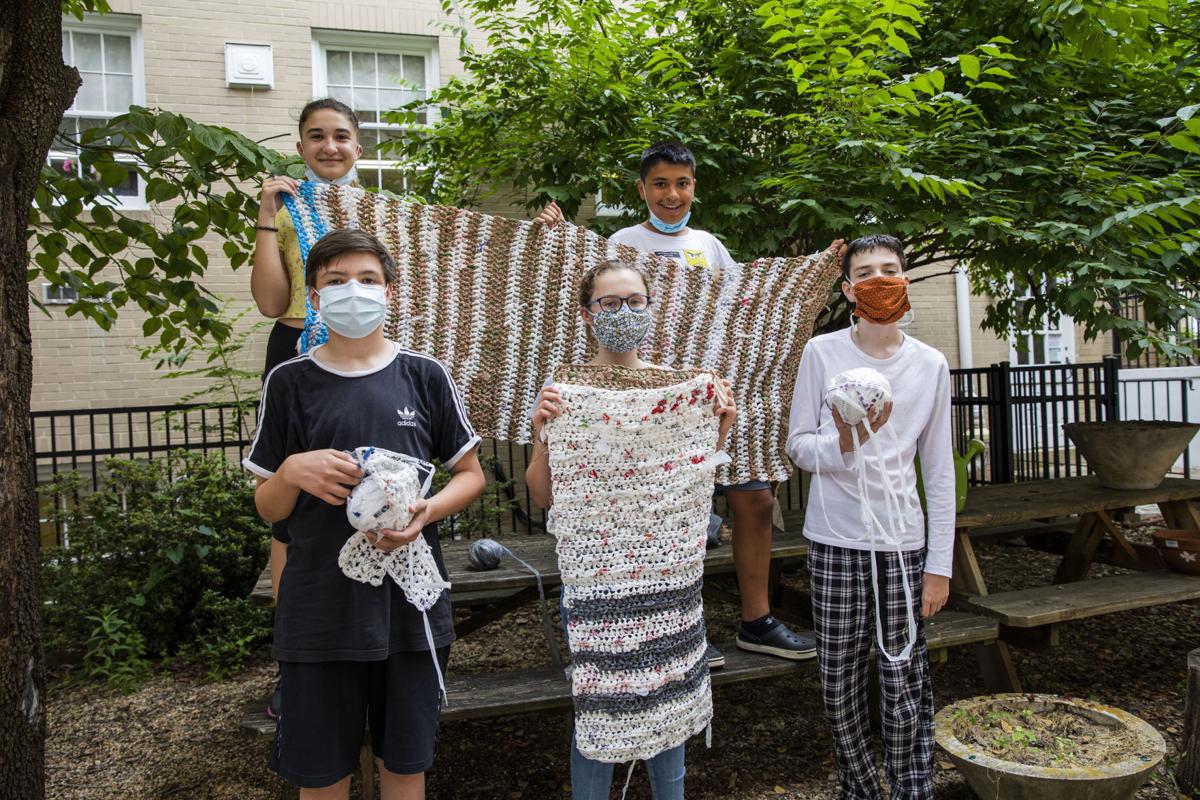 From left, Eliza Best, 13, Isaiah Sadowski, 12, Nick Dempsey, 13, Kara Francis, 14, and Seth Cleveland, 14, pose for a portrait outside on the school courtyard on Monday. The students are creating these waterproof mats from recycled plastic bags for homeless individuals. 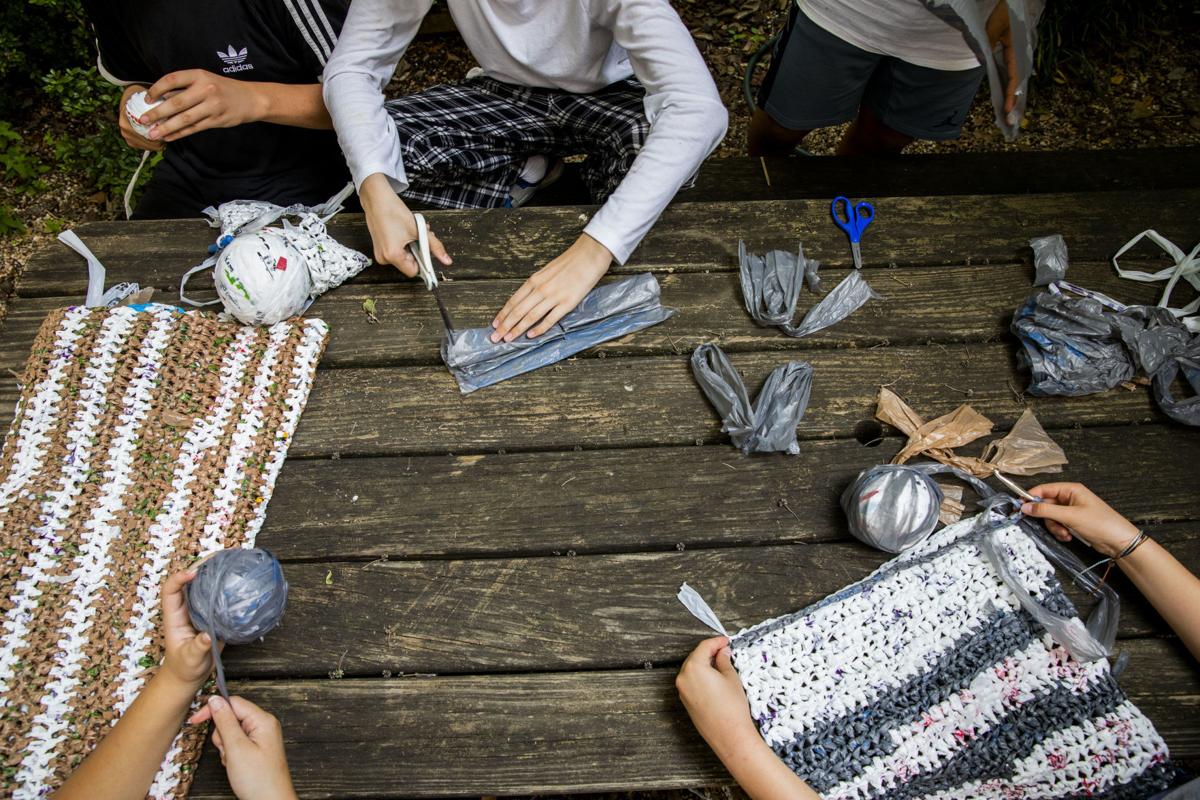 Monocacy Valley Montessori Public Charter School students crochet mats outside on the school courtyard on Monday. The students are creating these waterproof mats from recycled plastic bags for homeless individuals.

Eliza Best, 13, an eighth grader at Monocacy Valley Montessori Public Charter school, crochets a mat outside on the school courtyard on Monday.

Kara Francis, 14, an eighth grader at Monocacy Valley Montessori Public Charter school crochets a mat outside on the school courtyard on Monday. The students are creating these waterproof mats from recycled plastic bags for homeless individuals.

From left, Eliza Best, 13, Isaiah Sadowski, 12, Nick Dempsey, 13, Kara Francis, 14, and Seth Cleveland, 14, pose for a portrait outside on the school courtyard on Monday. The students are creating these waterproof mats from recycled plastic bags for homeless individuals.

Outside of the Monocacy Valley Montessori Public Charter School, at a wooden picnic table drizzled with shade from a nearby tree, an argument was unfolding among a squad of middle schoolers.

How many plastic grocery bags were piled up at the back of Ms. Zoe’s classroom?

It had to be more than 100, one girl piped up. No way, someone else chimed in — try 200. Then, the voice of 12-year-old Isaiah Sadowski rose above the chatter.

“If these plastic bags were people, they would probably outmatch every single army in the entire earth,” he proclaimed, causing his classmates to erupt into giggles and make their disagreements known.

Never mind the specifics -- there were a whole lot of bags. And they're being collected for the same purpose: to be “upcycled” into yarn and crocheted into 6-foot mats, which the students hope to donate to a local homeless shelter.

The students aim to tackle two missions at once: reducing the amount of plastic waste in landfills and waterways and helping homeless people in their community -- the mats are waterproof and can be used to keep sleeping bags and other belongings off the ground.

Sadowski and his classmates are in good company. In all, there are about 60 middle schoolers at the school, all of whom have been working on similar social action projects during the last quarter. It’s the first year that such a unit has been taught at the school, said Zoe Alexandratos, an English and social world teacher at Monocacy Valley, and she is so proud of what her students have been able to accomplish.

“It’s hard for these guys. They’re very aware of how many problems there are in the world right now, and they’re very affected by all of them,” she said. “I really want them to see that there is hope and that they can make change.”

Alexandratos’ goal for her students stems from the Montessori teaching philosophy, which emphasizes social justice and encourages children to apply what they learn in a classroom to the real world. During the first half of the quarter, Alexandratos and her students discussed the history of social issues and how they intersect with one another, learned about change-makers around the world and read books that tackle social justice issues, such as David Klass’s “California Blue.” Then, the students picked an issue that they were passionate about and started thinking of ways they could make change.

Sadowski and a couple of his classmates landed on the plastic mat project. Other students made dog toys out of recycled T-shirts and baked dog treats, which they’ll be selling at the school on Thursday and Friday afternoon to collect money for no-kill shelters in the area and to raise awareness for the cruelty of puppy mills. On the same afternoons, other students will be hosting an art sale to benefit the Heartly House, which provides services for the survivors of intimate partner abuse, sexual assault, human trafficking and child abuse.

Tuesday will mark the second day in a bake sale, which a handful of students organized to raise money for the World Wildlife Fund, an organization they chose for the variety of causes it works on, 14-year-old Shanuka Navaratne explained. And, 13-year-old Taylor Markey added, when they donate money to the fund, they’ll be able to “adopt” a meerkat — an animal that is also the school’s mascot. The Walkersville Black-owned cake shop, Brick Block Cakes, donated four dozen cupcakes to Monday’s sale, Alexandratos said.

In completing the projects, Alexandratos said, her students are putting skills from a variety of subjects to practice, from math and history to persuasive writing. Eighth-grader Seth Cleveland, for instance, contacted a local organization that provides services to homeless families to ask if it would accept the plastic mats. Other students wrote letters to their classmates, asking for plastic bags, and Sadowski and 13-year-old Eliza Best wrote to The News-Post to raise awareness for the project.

Cleveland, Best, Sadowski and their classmates are hoping to donate the mats at the end of this week or the beginning of next week, Alexandratos said. In the meantime, they’ll be spending their free period each day making “plarn," plastic yarn, which 14-year-old Kara Francis and two of her classmates will be using as material to crochet — a skill Alexandratos taught Francis when she was her fourth grade teacher.

“I’m just proud of them for taking the initiative,” Alexandratos said. “I really want them to see themselves as change agents.”

Correction: This story has been updated to correct the name of Brick Block Cakes in Walkersville.

You can take them to any grocery store three, they usually have containers outside the door where you can drop them off.

Frederick County Recycling no longer accepts plastic bags - at least for curbside pickup - so I wonder who does the recycling.

Plastic bags can be made into water-proof yarn?

Yeah my daughters girls scout troop made mats for the homeless a few years ago and they loved them. it helps keep their blankets off the ground, obviously does not keep all the water out.