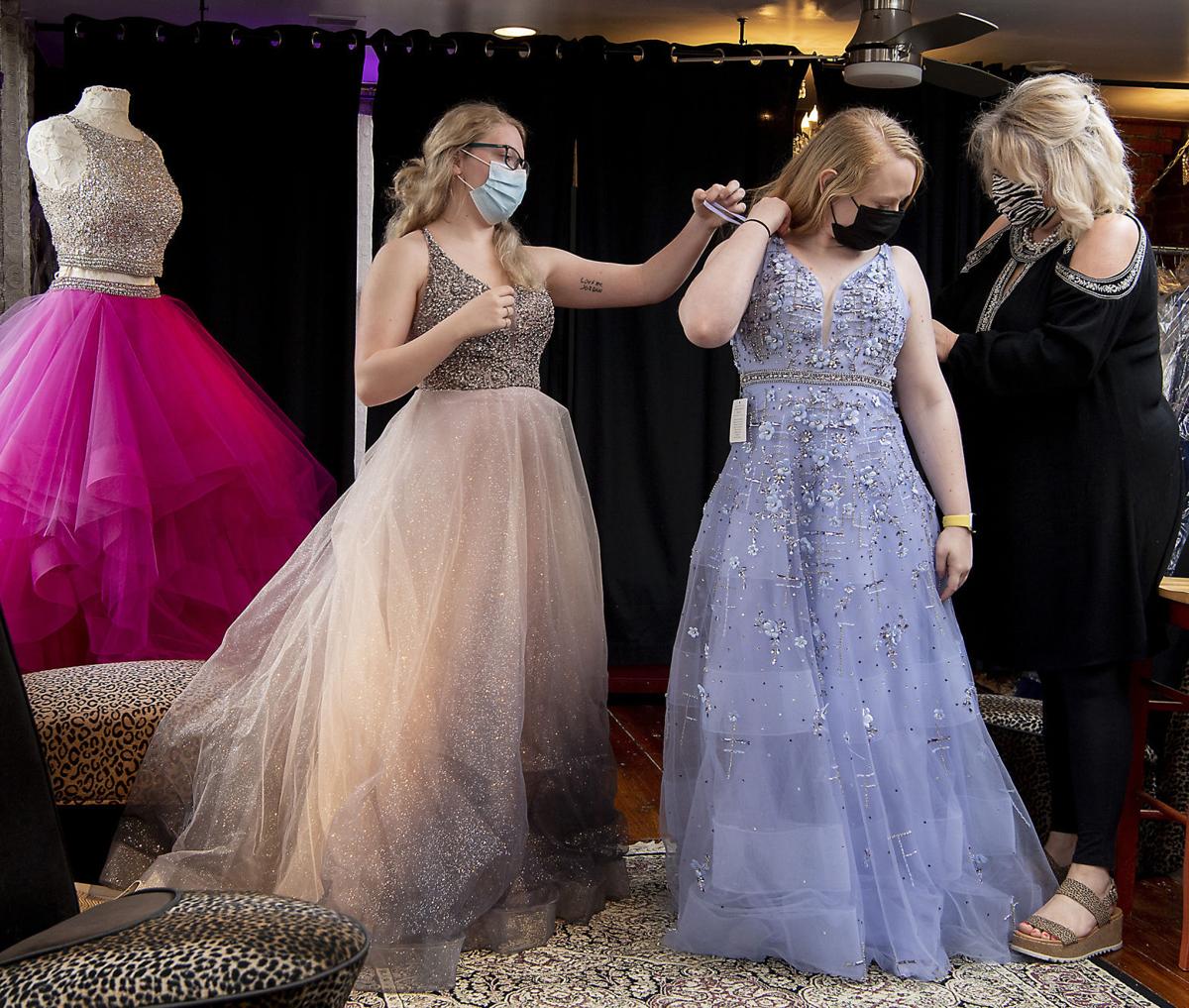 Suzi Way, manager and senior stylist at TLC Bridal Boutique in downtown Frederick, has planned an event for high school seniors called "A Night Under the Stars” to take the place of traditional proms, which have been canceled because of the pandemic for the second year in a row. She is shown helping her daughter Jenni Way, left, and close friend Ashlyn Thompson. The girls are both seniors at South Carroll High School and plan to attend the prom-like event. 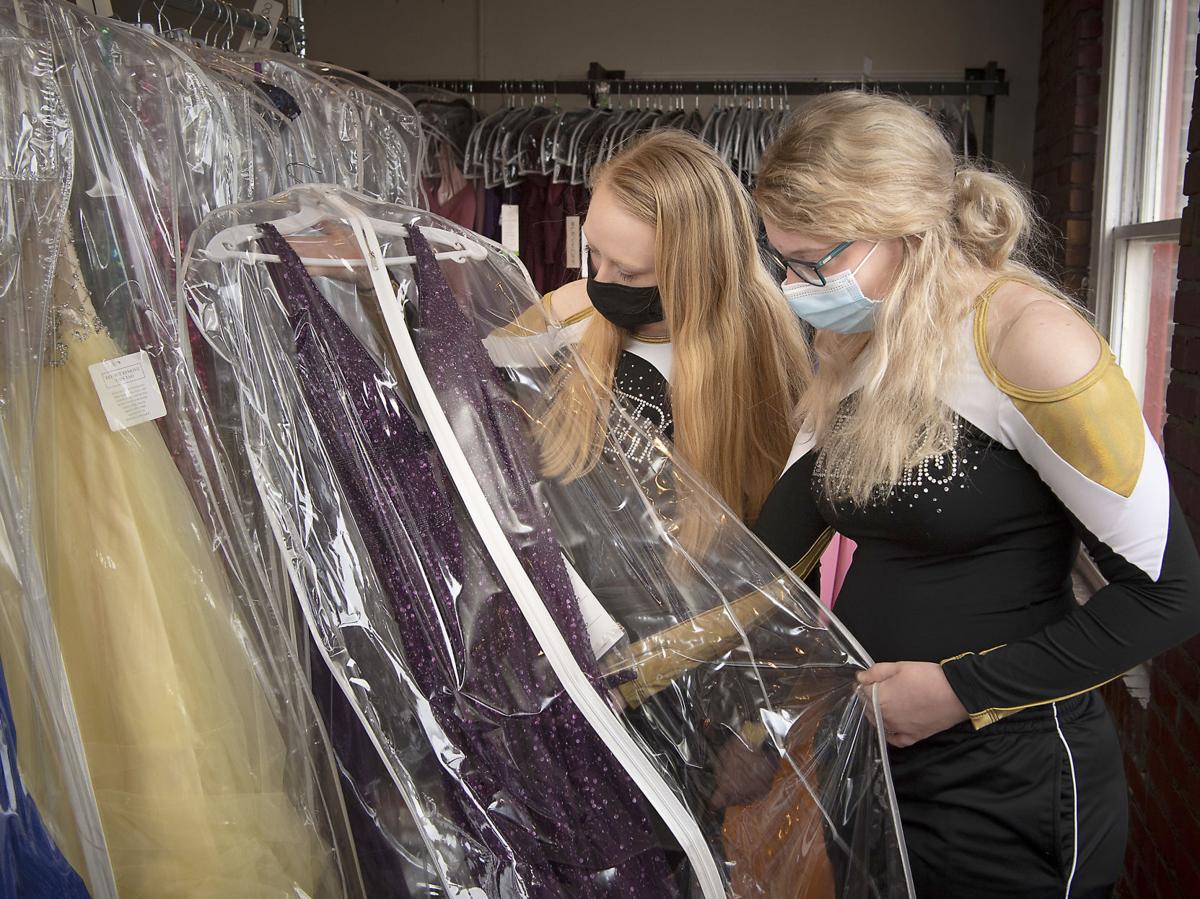 Suzi Way, manager and senior stylist at TLC Bridal Boutique in downtown Frederick, has planned an event for high school seniors called "A Night Under the Stars” to take the place of traditional proms, which have been canceled because of the pandemic for the second year in a row. She is shown helping her daughter Jenni Way, left, and close friend Ashlyn Thompson. The girls are both seniors at South Carroll High School and plan to attend the prom-like event.

Frederick County's class of 2021 has had it rough. There's no denying that.

Midway through their junior year, the world shut down, and for months, limited virtual learning was the only form of school. The summer of 2020 had a glimmer of hope that the soon-to-be seniors would be able to spend their final year walking through the halls of their beloved schools, but those hopes were soon dashed as the pandemic showed no signs of letting up.

The seniors of Frederick County have missed out on a year of traditions. They were denied a normal football season, homecoming celebrations, senior picnics and trips, and many spent their last year stuck at home learning through a screen.

With the end of the school year approaching, the class of 2021 was denied one more thing — a prom. Frederick County Public Schools announced earlier this year that no school-sponsored proms would be held.

Luckily for many seniors of the county, however, their school communities stepped up to provide the famous end-of-year celebration, which is often seen as a culminating event in a high schooler's experience.

As soon as Dani Gurrie heard that FCPS-sponsored proms were canceled, she knew she had to do something. Gurrie is a parent of a senior at Gov. Thomas Johnson High School and an event planner by profession. So she was the right person for the job.

“My son has had a crappy senior [year] and a crappy end to his junior year, so I wanted to be able to provide something that they would have good memories about for this year," Gurrie said.

She began getting in touch with her local contacts and soon had an indoor space secured at the Frederick County Fairgrounds. The Null Building is large enough to hold 800 people. With current COVID-19 restrictions, it can hold 400, which is just the right amount of space Gurrie needed.

Gurrie wasn't alone in hoping for a prom for her son and his classmates. She was contacted by a representative from the fairgrounds asking if Walkersville and Middletown high schools could use the building the same weekend as TJ High, just on different nights. Gurrie said absolutely, and a partnership between the three school communities was formed.

“We now have these schools, who under normal circumstances, you wouldn’t think that we would all work so well together, but we truly have, and it’s been really great to not only share in some of the expenses but just to bounce ideas off each other and find out what everybody’s doing," Gurrie said.

Parents involved in the planning process at the three schools decided to share costs on everything from decorations to the DJ in order to keep expenses and ticket costs low. Walkersville will host its prom first on May 13, Middletown High will host on May 14, and TJ High on May 15.

Each prom will adhere to social-distancing guidelines, temperatures will be taken at the door, hand sanitizer will be available throughout the building and mask-wearing will be strongly encouraged.

“We’re not denying that the virus exists, and at the same time we want our kids to have a good time, so we’re trying to find that balance where it will be safe for the kids to attend, as safe as we can possibly make it ... and at the same time give them something fun for this year," Gurrie said.

Businesses throughout Frederick County have also stepped up in their own way to help the class of 2021 celebrate. Suzi Way and Jessica Bidle of TLC Bridal Boutique in downtown Frederick planned an event for seniors called "A Night Under the Stars."

In partnership with Brewer's Alley and other local businesses, Way and Bidle planned for every student who bought a dress to have the contacts of all the vendors they would need to make their prom experience memorable.

Customers are given florist and photographer contacts as well as the opportunity to make a reservation at Brewer's Alley for a three-course dinner. As Way put it, their event is supposed to be everything but the dancing.

“We’re so glad to hear that at many of the schools, the parents have gotten together and have booked prom locations ... for us we were like, yay, because it’s all about the kids,” Way said.

There are also students who have decided to plan their own celebration, especially many juniors who normally would be able to attend a school-sponsored prom.

Jessie Wirtz, a junior at TJ High, decided to plan a night of fun at the end of April with her friends.

They plan to get dressed up, take pictures by Carroll Creek, grab dinner from Pretzel and Pizza Creations and spend the night hanging out.

“Obviously, it’s not going to be the same experience as real prom, but we want to be able to have half of that experience until next year when things are back to normal," she said. "And the best part about doing your own thing is that you can do whatever you want.”

Despite some reservations from students about parents planning their prom, many are realizing they will have more freedom at a non-FCPS sponsored event.

“The No. 1 thing I hear from kids is no restrictions on the music," said Paulette Anders, an organizer for Middletown High's event. "They are so thrilled that they get to play whatever music they want to. Nobody is going to want a school-sponsored prom after this."

Rachael Robinson, a senior at Middletown High who has been involved with the planning, said the event is coming together beautifully.

"I think it’s going to be a really exciting thing and one for the books,” she said.

The idea of attending prom is exciting enough. Being able to choose your own music and not be restricted by school rules is even more exciting, she said.

But for this senior class, there is one aspect of the alternative prom that tops the list of things they're looking forward to — seeing their classmates after a long, tough year.

"I’m just looking forward to seeing all my friends again and getting some spirit back, because everyone is kind of bummed that we can’t do much, so this prom is going to be really fun for everyone, I think," said Larissa Rideout, a senior at TJ High.

Her classmate, Wilson Seltzer, said spending time with friends is supposed to be what senior year is all about.

"Before you go to college you're supposed to be around people you love and do the things that you love ... we weren’t really able to see any of our friends this year," he said. "I think this prom is going to be a night for many people to remember and for good reason.”

Seltzer said he was initially worried about attending the event due to COVID-19, but now that he and his date are both vaccinated, he feels more comfortable.

When Natalie Anders found out her mom was going to plan a prom for her and her fellow seniors, she cried.

“It was probably the best day in a long time. Finally, seniors are going to be able to get together and have a good time," she said.

Anders described the past year in one word: lonely.

“The senior class of Middletown this year, we’re all super close and so for us to be on a screen with each other, it’s just super lonely," she said.

Robinson said the isolation has weighed on her. She feels like she's done nothing substantial the whole year.

The painstaking past year is the main reason many parents and community members decided to come together and plan or contribute to the cause.

“I'm really grateful for this Frederick community, which is extraordinarily generous. I think a lot of people understand that we’re trying to do a good thing, and hopefully what comes out of it will be a great memory for these kids as they move on," Gurrie said.

The seniors need it after all the obstacles life has thrown at them, Paulette Anders said.

"This is just going to be good for their soul, their mental health," she said. "They haven’t done anything like this in a year, and this is sort of a rite of passage."

Oakdale, Catoctin, Brunswick and Linganore are also having parent sponsored proms. The beauty of this article is that three high schools (two of which are major football rivals) are working together to provide an experience for the class of 2021. The building holds over 800 people, all three proms will have approx. 200 students total. These are completely OPTIONAL events. Beyond dancing, there will be other activities for students. Those 16 years or older are eligible for the vaccine. It is time to get back to some normalcy.

‘“I think a lot of people understand that we’re trying to do a good thing, and hopefully what comes out of it will be a great memory for these kids as they move on,’ Gurrie said.” A year in captivity with teenagers clearly takes a mental toll?

Totally irresponsible of these parents and the fairground for letting this happen. The proms are not happening due to a highly contagious virus. The FNP should not be glorifying this bad decision to violate all the rules related to gatherings and crowds. A super spreader event in the making. Unbelievable!

". . .and mask-wearing will be strongly encouraged." Why isn't it required?