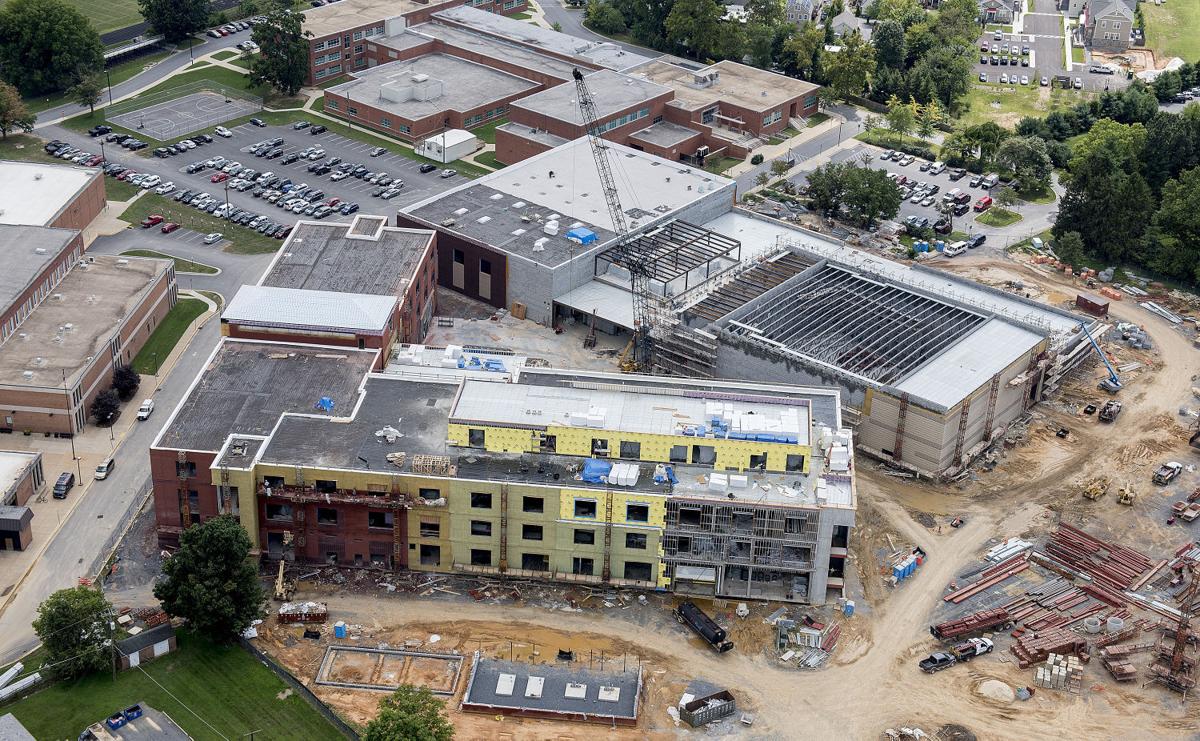 The new Frederick High School construction project is about 50 percent complete and is expected to open next fall at the beginning of the school year. 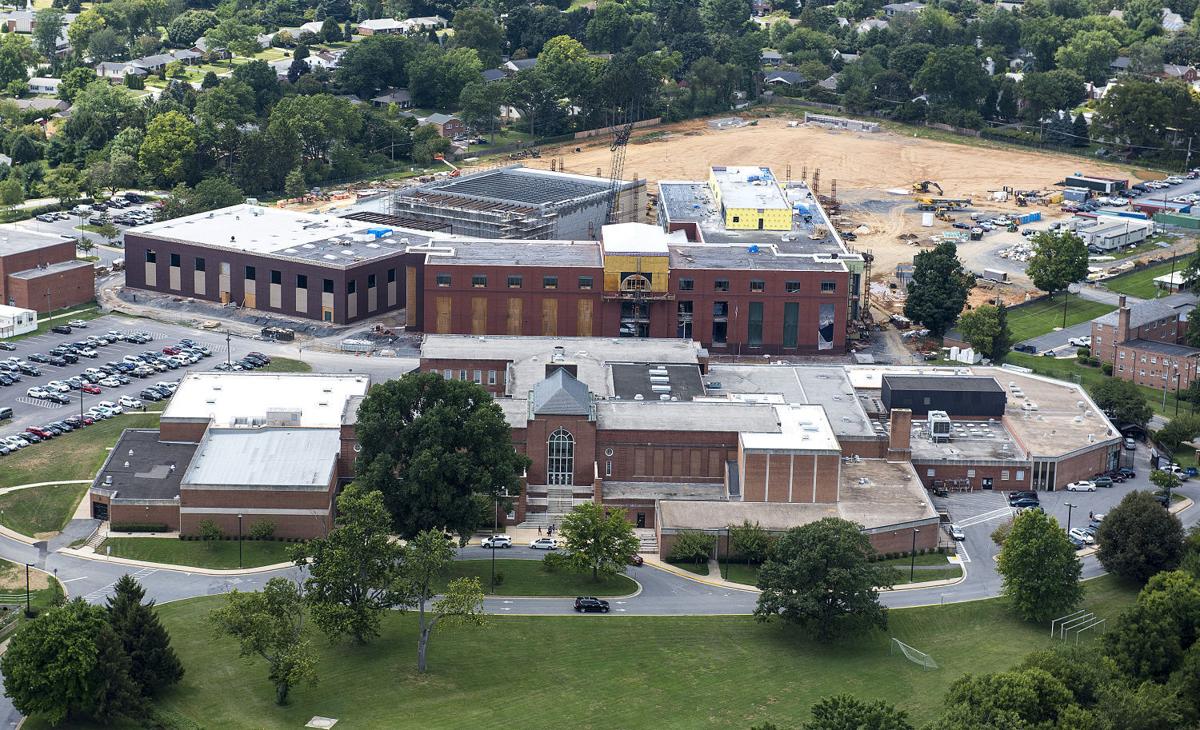 The new Frederick High School construction project is about 50 percent complete and is expected to open next fall at the beginning of the school year. The 270,000 square foot complex has an estimated cost of about $114 million though the school district has saved about $2 million in construction costs. In this aerial view the main entrance of the school is shown behind the existing school which will be demolished. The baseball stadium dugouts can be seen at the top.

The new Frederick High School construction project is about 50 percent complete and is expected to open next fall at the beginning of the school year.

The new Frederick High School construction project is about 50 percent complete and is expected to open next fall at the beginning of the school year. The 270,000 square foot complex has an estimated cost of about $114 million though the school district has saved about $2 million in construction costs. In this aerial view the main entrance of the school is shown behind the existing school which will be demolished. The baseball stadium dugouts can be seen at the top.

Construction of the new Frederick High School building is about halfway complete and is on schedule to open next fall, the project’s construction managers said this week.

What was just large swathes of dirt nine months ago has been replaced with the high walls of the school’s new gymnasium and auditorium, which are largely finished (though the auditorium lacks a roof).

You can stand on the roof of the main school structure, and in the distance spy the spires of the city of Frederick and just barely, the top of the Ferris Wheel at The Great Frederick Fair.

Both school and county government officials have touted the new Frederick High as a long-needed replacement for what is currently the oldest high school building in the county. Officials often note that Frederick High serves the county’s most vulnerable students, including a large Hispanic population and many low-income families.

The new school’s features are plentiful and contemporary — LED lights above the stage and the gymnasium, a modern kitchen, large windows that stream in natural light in both classrooms and offices. An arched window frames the main entrance of the school, which faces out to the old building that will eventually be demolished and transformed into the new school’s parking lot.

Overall, the school totals more than 270,000 square feet and can accommodate more than 1,800 students, according to the capacity determined by the state.

It’s not an inexpensive undertaking, and at an estimated $114 million, it’s more than officials initially expected. Brian Staiger, Frederick County Public Schools senior project manager, stressed his gratitude for the local and state funding sources which helped the project materialize. The school district has also managed to shave off about $2 million of the total roughly $97 million in construction costs, he said.

The school system pared down the number of needed electrical outlets and fewer gas jets in the science classrooms. Chief Operating Officer Ray Barnes said that the number of layers of drywall in between some rooms had been reduced from three to two.

“It’s a lot of little things that added up,” Barnes said in a phone interview.

For the next few months, the crews will concentrate on ensuring that everything is enclosed for winter — that walls have been erected, windows and roofs installed, Staiger said. During the colder months, the focus will turn indoors, so by the time late spring or summer rolls around, the move can begin and the school can open its doors by either late August or September, depending on whether Gov. Larry Hogan’s requirement for a post-Labor Day start to the school year sticks.

Only the “common area” of the school building — a central location where students will hang out in the morning then disperse to classes — has not been walled in.

Otherwise, much of the standard spaces of a school — offices and classrooms — are already recognizable. Its baseball field and its dugouts have been constructed, and have started to be seeded, Staiger said. Under the field lies the geothermal wells that the school system uses to comply with the state’s stricter environmental standards.

Classrooms and the hallways containing them have taken shape, as have offices. Principal Kathy Campagnoli’s office at the end of the administrative corridor contains a sizable window, though not as grand as the window of one particular conference room above the main entrance.

Campagnoli has taken this school year off from her usual duties to focus on opening the new building.

Right now, Campagnoli is working on the list of needed furniture and equipment, with a budget between $5 and $6 million, Barnes said.

She will also help implement a new flexible academic and career program there that will be less subject to many of the state requirements for schools.

Officials had hoped to fund the Linking Youth to New Experiences (LYNX) program with a $10 million grant from a national competition, though they lost out and have turned to businesses and other partners to help subsidize their vision.

Final details of LYNX have yet to emerge, though the school district has said it hopes to allow students to engage in more internships, rely more on technology and possibly enroll in classes during hours not typical for a school, such as at night.

A tour of the new Frederick High School construction project.

A tour of the new Frederick High School construction project.

Thank you! for sharing the details about essay writer uk school as I am waiting for so many times for completion of the school building. The have such huge project and I desperately want that my son would get admission here and start his study from this school. Please share latest updates about the school building completion.

The new Frederick High School looks somewhat similar in scale to the proposed downtown hotel and conference center, which the City presently puts at $84m, $30m less than what the FHS is costing. A state stadium authority estimator Forella in January put the cost of the DH&CC at $94m (without parking) but City officials talked him into lowering his estimate $10m. Taxpayers are up for $31m of the $84m as it is. Cost blow-outs may be in the works. Forella may end up having underestimated!

As usual Samuel you are very confused, terribly uninformed, and spreading misinformation, not to mention unable to read. The hotel and conference center is about half the square footage of the high school. With regard to the Forella revised estimate, Forella agreed that the assumptions were not correct. More misinformation. You have no credibility.

This article is about the high school. But Master Purveyor of Misinformation Samuel tales it as an opportunity to spread more misnformation about the hotel. It's quite pathetic having to fabricate opportunites.

Silly me, i thought i was reading a story about a new high school..... No need to be such a troll.