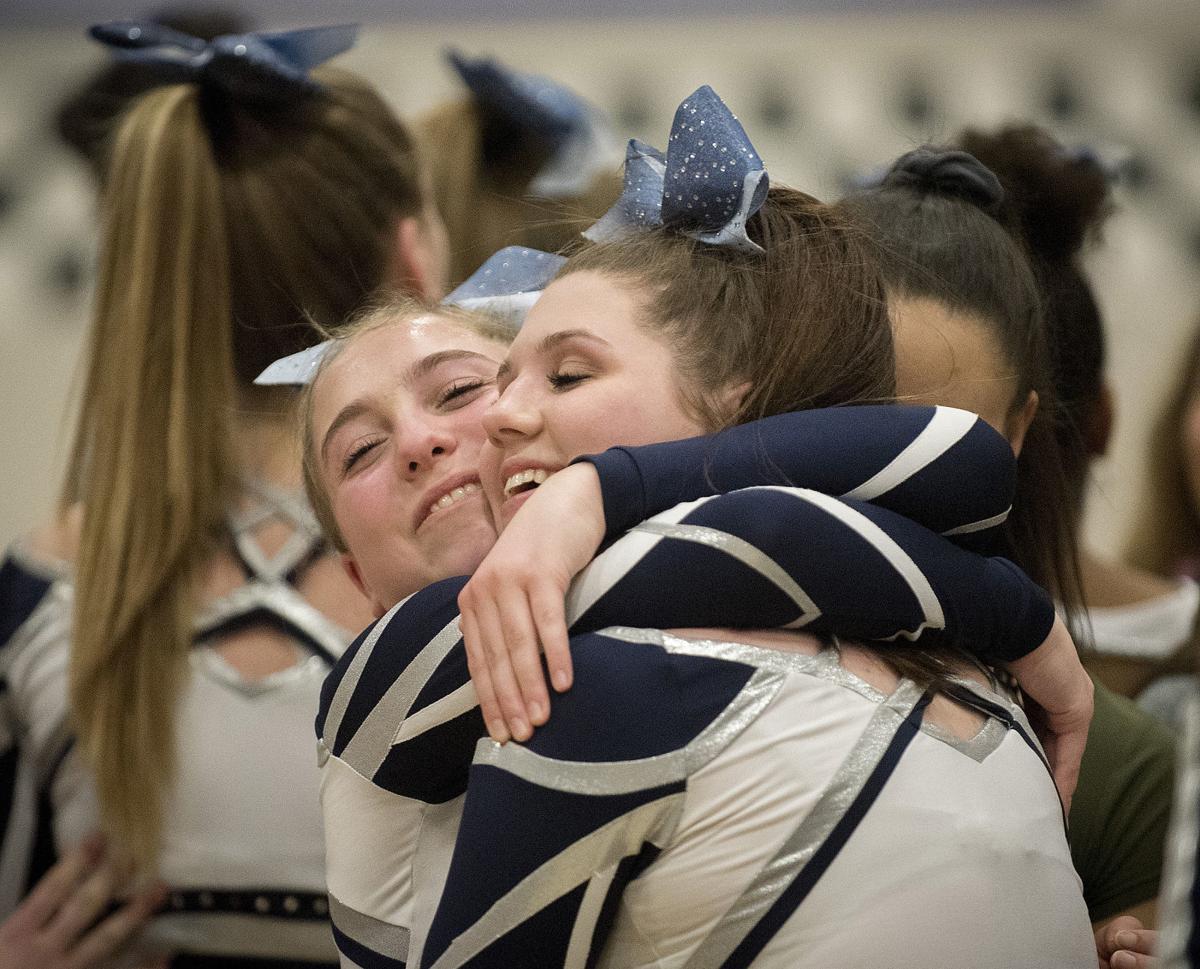 After what was described as a “tragic” season, in which the team lost members due to concussions, other injuries and academic requirements, the varsity and junior varsity teams hit the mat and walked away with first place Wednesday night at the 2018 Frederick County High School Cheerleading Competition.

“We’re going to try our hardest and do what we have to do to win,” Rayonna Samuels, 16, a junior on Urbana’s varsity team, said before the competition started. Within the hour, she and her teammates were hugging with tears in their eyes.

“We literally put our heart into that,” Rayonna said after.

Earlier this week, victory looked out of reach. Urbana High School’s varsity cheer team had to relearn its entire routine after a teammate lost her eligibility to compete, said Kayla Smith, a 17-year-old junior on the team. Nearly every part of the routine had to be changed.

For Kristin Keefer, who has coached the Urbana cheerleading teams for three years, waves of relief washed over her as she watched the routine. Lifts went up and stayed there, and flips landed solidly.

“It’s been a very, very chaotic season. They went out there and made us very proud,” Keefer said.

The team recycled their winning state routine, but had many new faces on the mat with them on Wednesday night.

“We have to show them that nothing’s changed and [that] we came here with the same agenda — [to win],” captain Sierra Bennett, 17, a senior at Linganore High School, said before the performance.

Coming off their state win, she and co-captain Alex Michael expected the panel of judges to scrutinize their stunts, pyramids, jumps and tumbling even more than past years. Ultimately, they came up 2.1 points short of Urbana High School’s varsity team.

Wednesday was a night of ups and downs for all the squads, which represented Gov. Thomas Johnson, Tuscarora, Middletown, Linganore and Urbana high schools.

“I don’t think any team can compare to any other. Each team has their strengths,” said Brooklyn Poff, 18, a senior at Middletown High School, which put one of the smallest squads on the mat Wednesday.

The team’s size forced them to get creative, including putting up an intricate two-person pyramid during their routine where other squads had three to five girls in the air. Skills and execution of those skills each have a numerical value in competitive cheerleading, so when there are fewer people on the mat, each person has to physically do more to tally points.

The glue that held it all together, though, was teamwork.

“When we have rough practices, that builds us up the most,” Brooklyn said.

The team got stronger together throughout the season, and when stunts finally did “hit,” that made all the hard work worth it, she said.

Rachel Rauh, 17, a senior at Gov. Thomas Johnson, agreed that teamwork all season makes or breaks a routine when it reaches competition time.

“If one person is gone, you can’t have the same kind of experience,” Rachel said.

The varsity squad from TJ pulled out a high-energy routine that had strong and technically challenging tumbling.

Tuscarora High junior Nakiyah Twyman said she hoped her squad would go out on the mat with confidence. Despite a strong start, a few falls and bobbles during the routine shook some of the members and they finished without the confidence they began with.

Looking ahead to next season, Urbana’s cheerleading team hopes to carry the momentum into the fall season. Keefer said it was a team effort from the coaching staff as well to bring home the title, which included assistant coach Susan Magnifico and junior varsity coaches Mary Toms and Lynsie Romanek.

“I think we have a good core group of kids and I think it will continue to grow,” Keefer said.

After coming up short in two previous years, Olivia Felton wasn’t going to let a sprained wrist keep her from her ultimate goal.