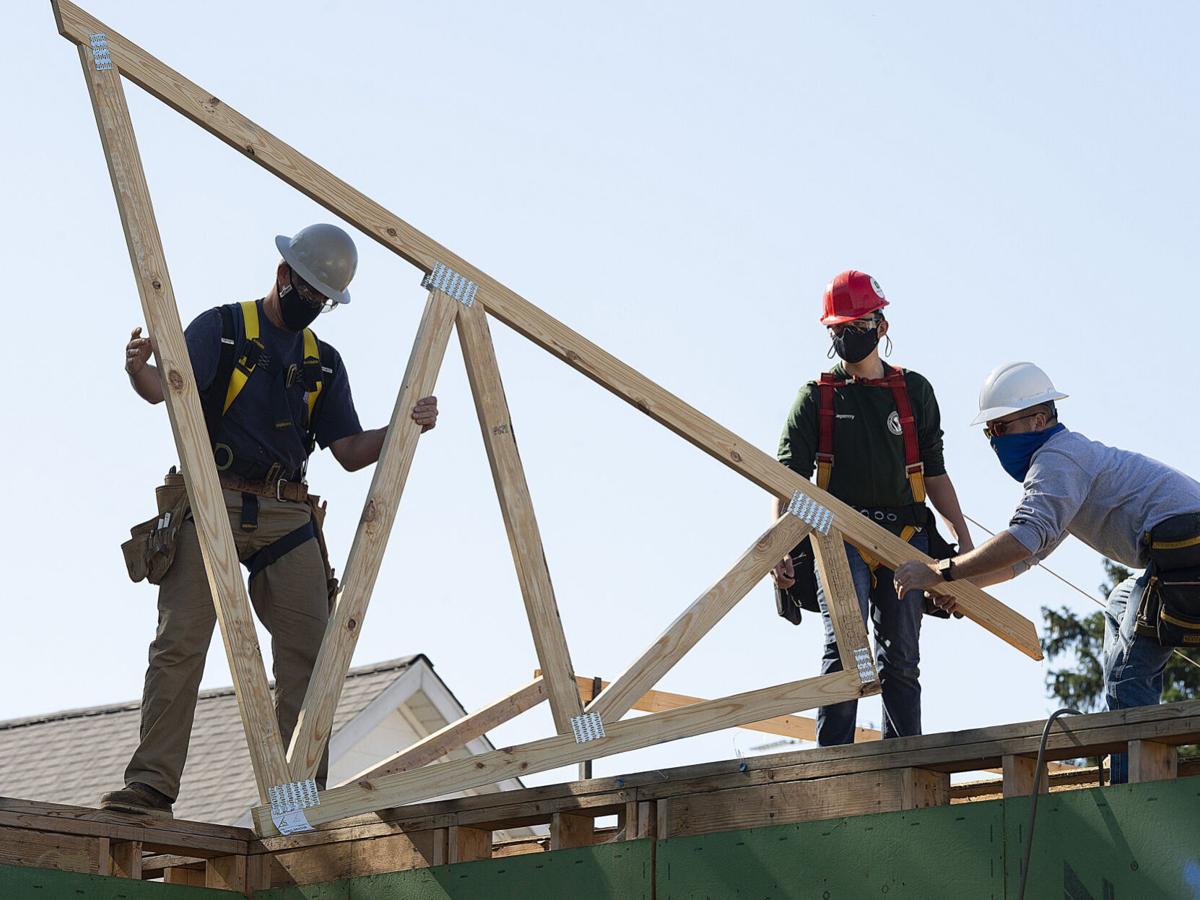 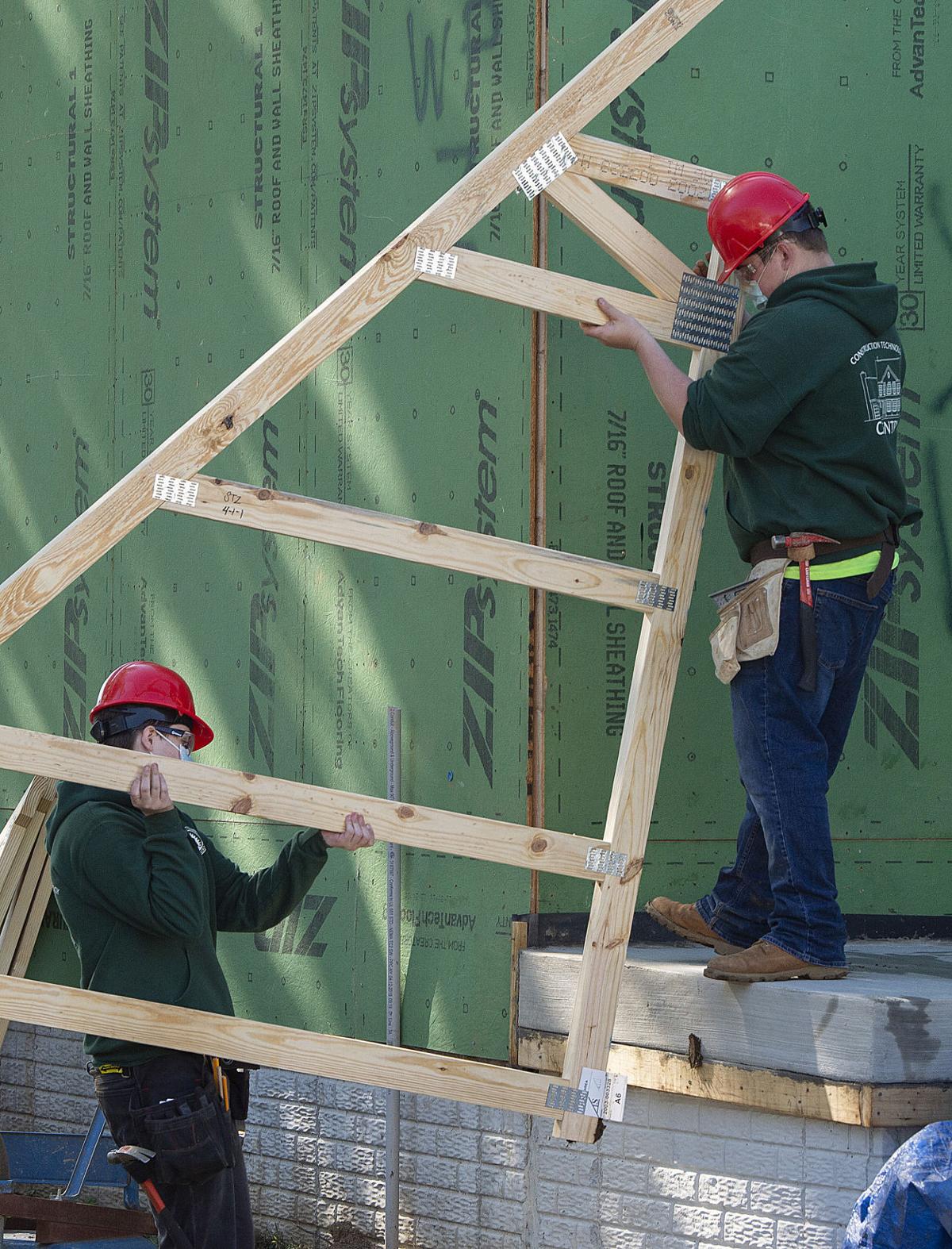 Frederick County Career and Technology Center carpentry students Nathan Merson and Lucas Oliver lift roof trusses to their instructors on the roof of the house they are building on Fulton Avenue in Walkersville. 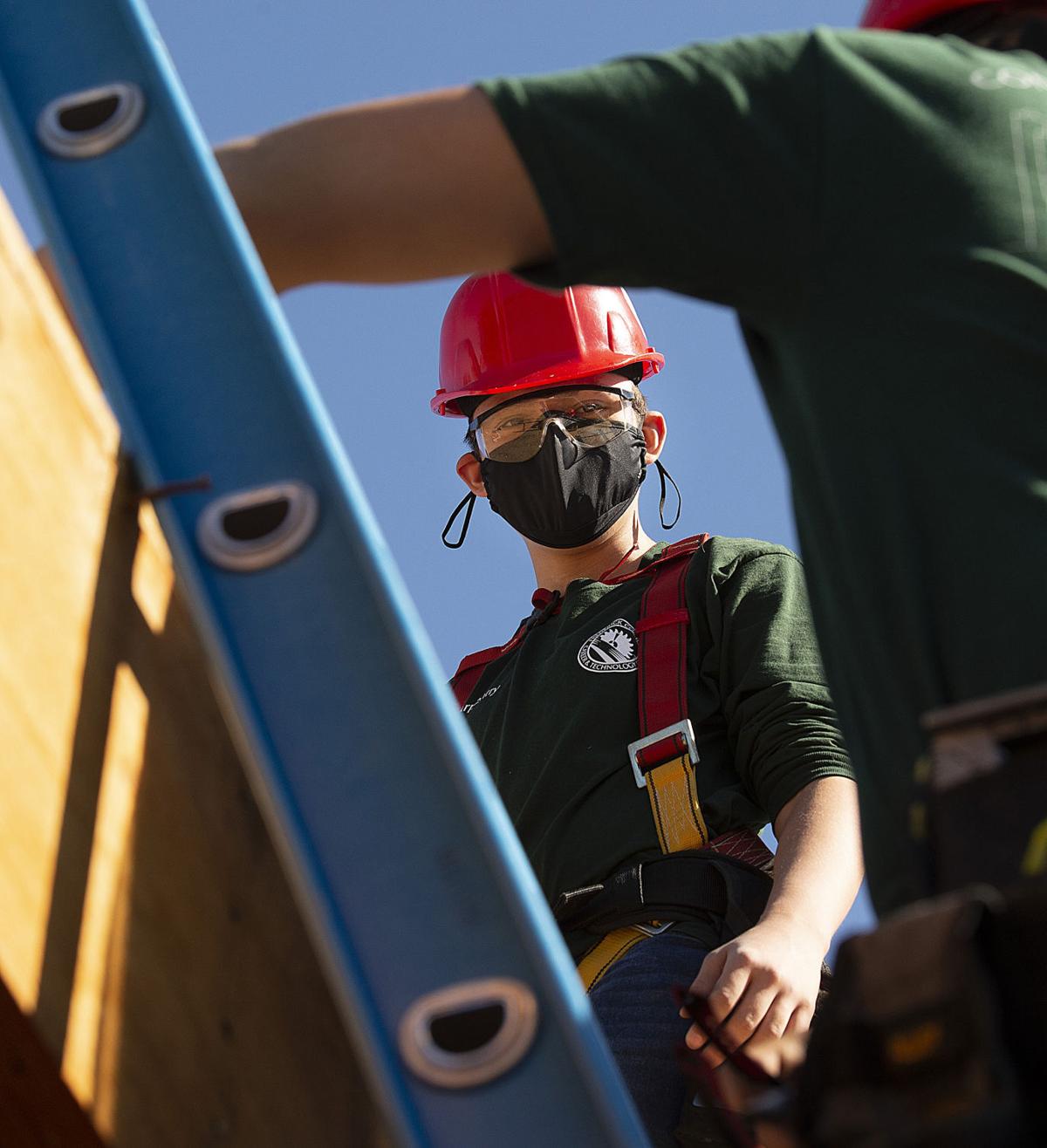 Frederick County Career and Technology Center carpentry students Nathan Merson and Lucas Oliver lift roof trusses to their instructors on the roof of the house they are building on Fulton Avenue in Walkersville.

As the Frederick County Career and Technology Center resumes in-person classes, students are also getting back to work on their home build, which has taken place every year since 1978.

The students broke ground on the house last September. The houses usually take two years to build — the first year focuses on framing the house, and the second focuses on the interior.

However, the students had to halt work in March when schools closed due to the coronavirus pandemic. The house is now behind schedule and will probably take an extra year to complete.

“The purpose of the project is to give them real-world experience and just not building little things in the shop that don’t really have a purpose,” he said.

On Saturday, students got the house prepared for trusses and framed out the second story. Four students are permitted to work on site at a time. In addition to their personal protective equipment like goggles and hardhats, they are now also required to wear masks and keep a distance from one another.

Ryan LaRocca, a junior and second-year carpentry student, said it felt good to be back on the construction site after six months away.

“It’s really nice that we’re able to come back and be able to do this even though it’s not as much as we used to, we’re still grateful for it,” he said.

CTC students are permitted to go into school for hands-on learning one day every other week. Thuman teaches on Tuesdays and Fridays, splitting his class in half. The next week, Mitchell Delashmutt, the Carpentry I teacher teaches on Mondays and Thursdays, and then the cycle starts over again the following Tuesday. The idea is that there will always be at least 72 hours in between each group of students using the same classrooms and tools.

LaRocca said he appreciates the opportunity to learn in person, especially when it comes to the house project, since most of the students in CTC enjoy learning by doing.

“Some of us are better doing it with our hands and working it out, actually doing something outside of a classroom,” LaRocca said. “So that’s what I really enjoy. It’s just a good opportunity to learn something else.”

This is the 33rd house the CTC has built, and it will be sold upon completion. The profits from the house go toward buying the lot and materials for the next year’s house. The two-story house at 12 Fulton Ave. in Walkersville will have 1,777 square feet of space, three bedrooms and two and a half bathrooms. There is also an unfinished basement and two-car garage behind the house.

Thuman said there is always a shortage of employees in construction, and the students will have a leg up when it comes to looking for full-time jobs when they graduate. While he knows he can teach them via online lectures, he says the only way to truly learn is to do it themselves.

“That’s what I tell the students. The purpose of this whole project is for you to make mistakes because that’s how you’re really gonna learn in this job,” Thuman said.

When students enroll in programs at the Frederick County Career and Technology Center, they often expect a lot of hands-on learning to occur.