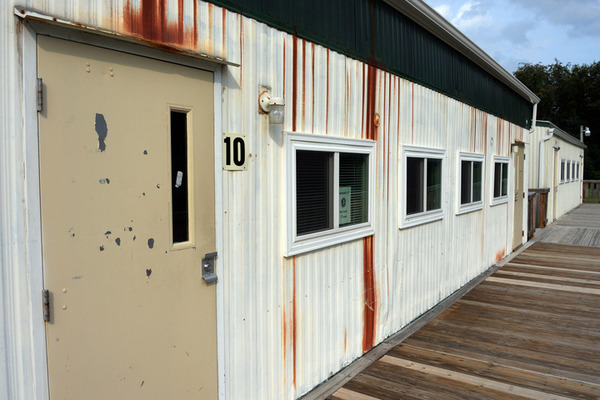 Carbon dioxide levels in Urbana Elementary School's portable classrooms do not climb high enough to cause medical problems, according to a June report by the Maryland Occupational Safety and Health office.

State Department of Labor inspectors visited the school in April after fifth-grade teacher Jeff Esko filed a complaint alleging that he had health issues caused by working in a portable classroom.

State inspectors did not find carbon dioxide levels exceeding the limit of 5,000 parts per million in any of the school's 14 portables, the report said. No health and safety violations were recorded in the final report, obtained through a Freedom of Information Act request filed by The Frederick News-Post.

Esko declined to comment on the report until he speaks with a lawyer.

Two state officials and Laura Olsen, the district's environmental health and safety manager, used hand-held carbon dioxide readers to record gas levels in each portable unit. Readings were taken at various times on multiple days, while unoccupied and with teachers and students present.

The highest amount of carbon dioxide observed was 1,580 parts per million, less than half the amount deemed unsafe for human exposure.

Rooms seen with higher levels of carbon dioxide were ventilated using only one of the unit's two fans, the report said. Teachers can control their classroom's ventilation by using the fans and opening windows.

Esko told MOSH in March that "excessively high levels" of carbon dioxide are seen each day in at least half of the school's portables. Teachers and students have had symptoms of carbon dioxide poisoning, including migraines, disorientation and fatigue, he said in the complaint.

"To improve ventilation, we are allowed to open the windows, but this does not always allow enough fresh air to circulate and ventilate the units," Esko said in the complaint. "Doors must be kept closed for security reasons."

The school district provides staff with appropriate training to use the equipment and did not intentionally harm any employees, the report said. Any problems with the system were incidental.

"Our schools are highly regulated environments," school system spokesman Michael Doerrer said. "We work closely with a number of agencies and organizations as we focus on the health and safety of our school buildings."

Inspectors also interviewed 12 other school employees as part of the inspection. Teachers said carbon dioxide levels can reach as high as 3,700 parts per million in the winter, according to the report.

Teachers union representative Jennifer Nguherimo did not respond to a request for comment.

Doerrer said the district works to make sure ventilation and HVAC systems are operating properly at all times.

"We have staff in the schools that regularly inspect our equipment to make sure the vents to the outside can be open and closed," Doerrer said. "Our principals and maintenance personnel work with teachers to make sure they're comfortable with the equipment in their classrooms ... that is our top priority in Frederick County."

Another poorly written article. "...Teachers said carbon dioxide levels can reach as high as 3,700 parts per million in the winter," How do they know?

So, we are ok with "the levels aren't high enough"???? How about we NOT use portables as a substitution for a school building. At the rate this BoCC wants to develop communities, 1/2 the student population will end up in portables. Frederick County has always missed the mark on schools. Urbana was overcrowded with in the first two years of being built - LONG before all the houses that are there now! FCPS used to be a good place to send your kids - now NOT SO MUCH!

At the rate this BoCC wants to build? These portables have been there for years. It was the previous BoCC that allowed these homes to be built.

Being a portable isn't what cause it. There have been portables at schools for decades

"It was the previous BoCC that allowed these homes to be built."

I say to this BoCC - invest in new schools instead of foolish capital projects and the next mass overcrowding in Monrovia. Use Urbana as an example of short sighted development and apply it to Monrovia before we pile more people on top of one another. Time to put the interest of citizens, especially our children, in front of developers and politicians.

Inspectors also interviewed 12 other school employees as part of the inspection. Teachers said carbon dioxide levels can reach as high as 3,700 parts per million in the winter, according to the report.

Cheap portables have cheap heaters that have to work over time when it's cold. Portables are not secure and students can't be locked down without toilet facilities. Brick and morter schools are needed.

Teachers who cause trouble usually end up hiding out in the administration building until retirement.

Now that my child is entering these specific portables this year, I'll keep an extra look out. Mr. Esko - from what I know of him - was a superb teacher and all of the children wanted to be in his class. He had his incident this past spring and it is extremely disappointing that he cannot return to school now. Mr. Esko did so much for Urbana Elementary School - he is a treasure to the schools history.

The levels of dihydrogen monoxide were off the charts!

Bet the new social security buiilding willl not loook like this for our school choildren .Money for all but schools in the USA.WOW Move to foreign land where our money builds new by the billions from Obama nd kerry.No portables when I went to school.

Looks like slums for school not like other local and state owned buildings including pro stadiums in Baltimore owned by us tax payers a disgrace to us tax payers in MD.Many will write their approval of portable class rooms to be sure the pro stadiums look A 1.Read it here.