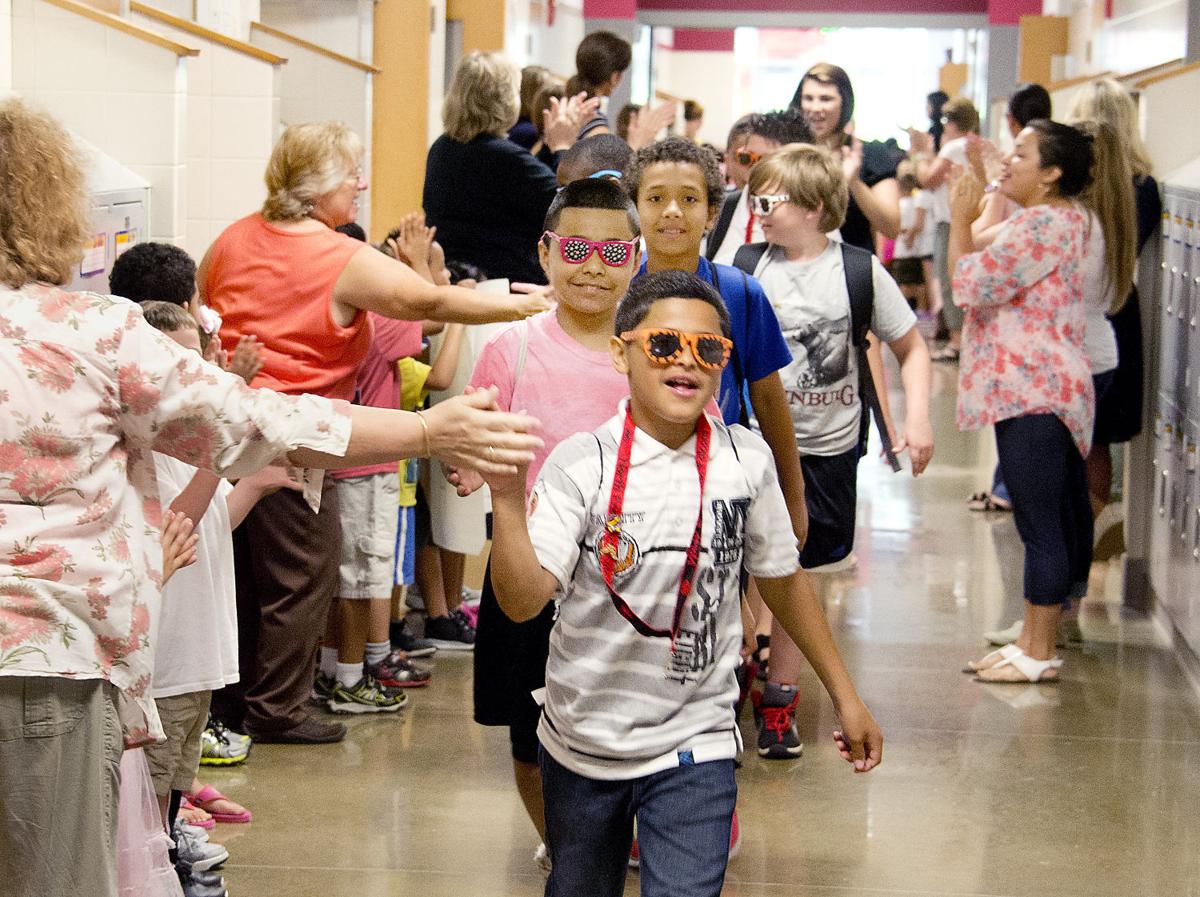 Jadet Charriez, a fifth-grader at North Frederick Elementary School, leads a line of his classmates Thursday through the school to the applause of other students and staff on their last day of school in elementary grades as part of a school tradition. 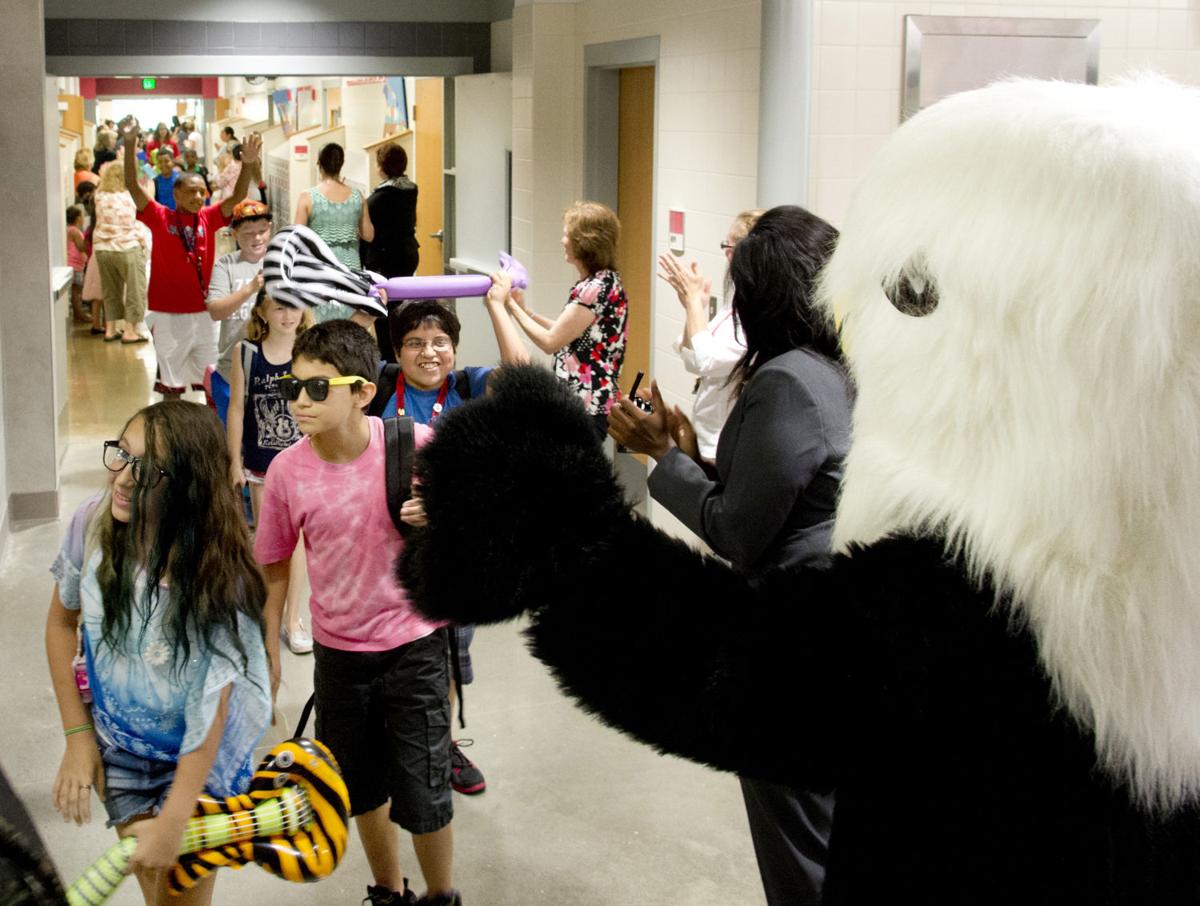 North Frederick Elementary School fifth-graders marched last week to the applause of other students, staff and mascot Freddy Falcon as part of a school tradition on their last day in elementary school. 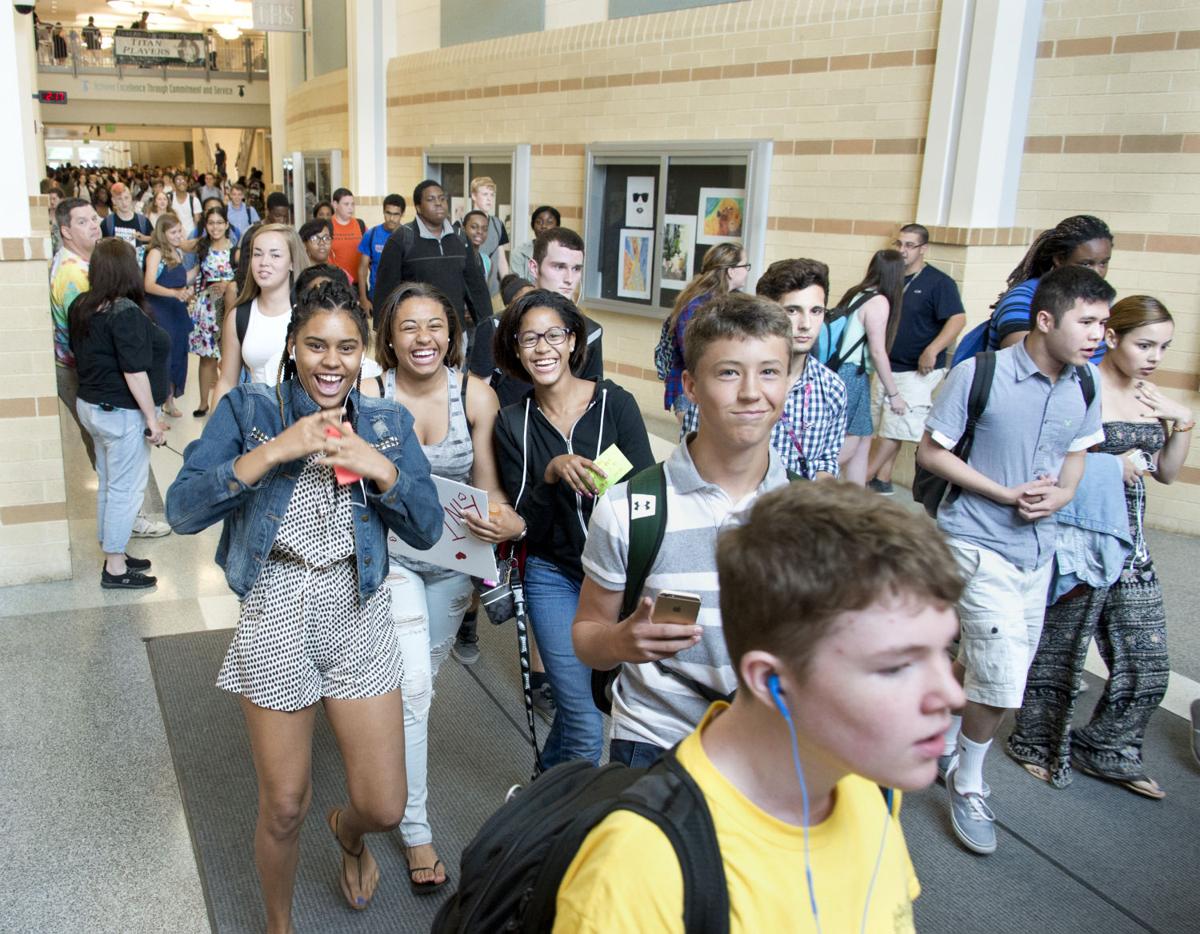 There were lots of smiles Wednesday as students at Tuscarora High School left for the summer. 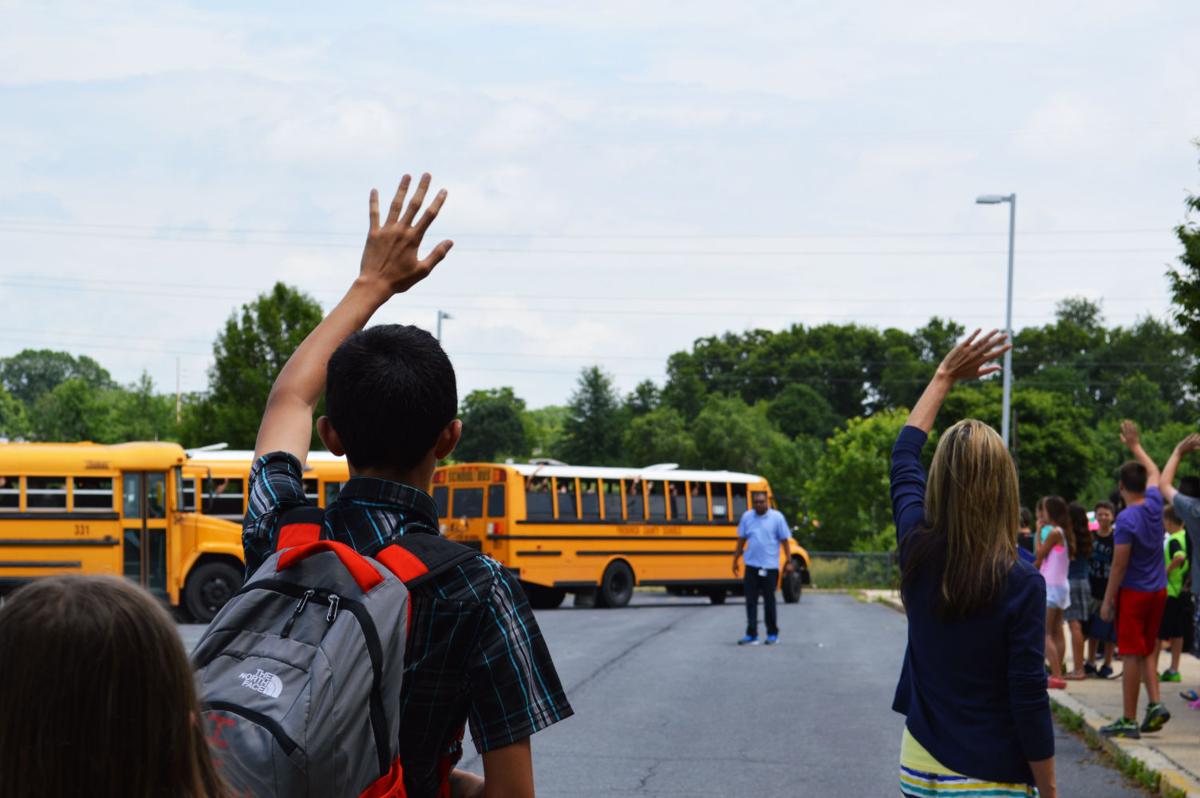 Governor Thomas Johnson Middle School students and teachers wave goodbye to buses and friends Thursday afternoon while celebrating the last day of school in front of the school. 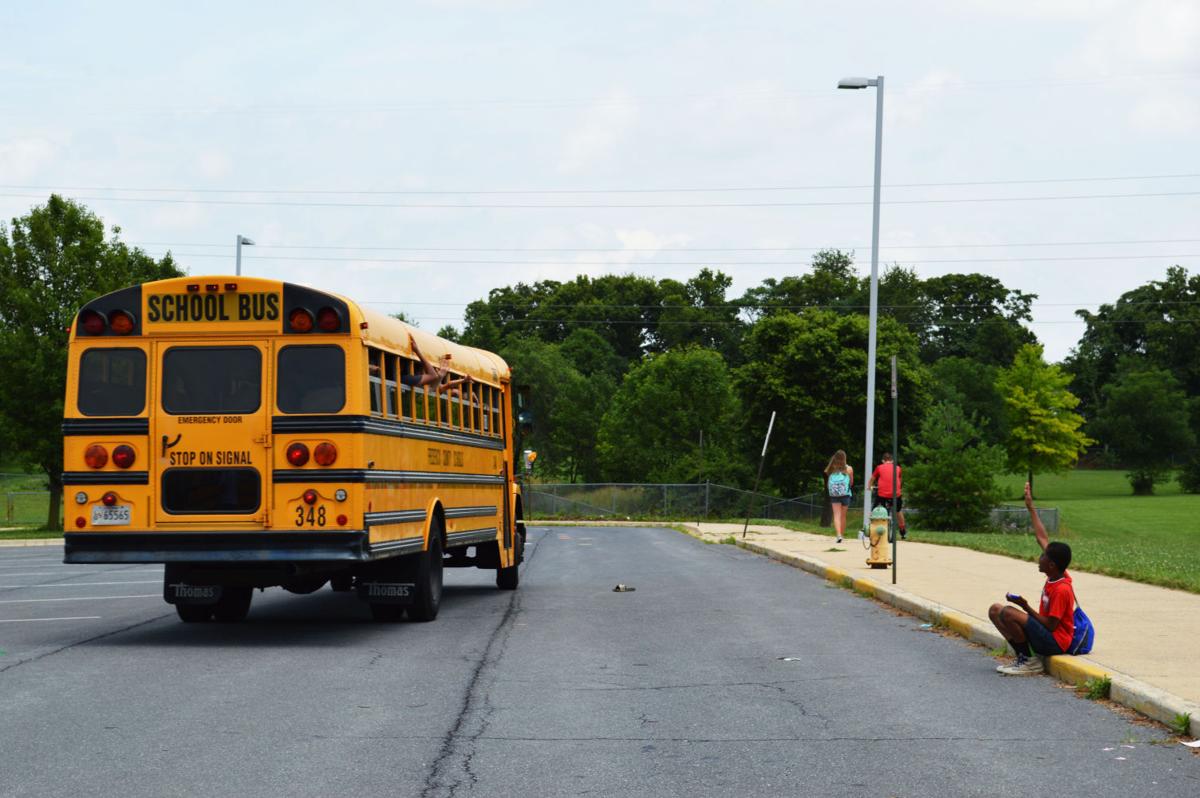 Students wave goodbye to teachers and friends outside of Governor Thomas Johnson Middle School Thursday on the last day of school.

Jadet Charriez, a fifth-grader at North Frederick Elementary School, leads a line of his classmates Thursday through the school to the applause of other students and staff on their last day of school in elementary grades as part of a school tradition.

North Frederick Elementary School fifth-graders marched last week to the applause of other students, staff and mascot Freddy Falcon as part of a school tradition on their last day in elementary school.

There were lots of smiles Wednesday as students at Tuscarora High School left for the summer.

Governor Thomas Johnson Middle School students and teachers wave goodbye to buses and friends Thursday afternoon while celebrating the last day of school in front of the school.

Students wave goodbye to teachers and friends outside of Governor Thomas Johnson Middle School Thursday on the last day of school.

The rooms of North Frederick Elementary School were abuzz Thursday, with children shifting in their seats — antsy to meet their parents.

A line of fifth-graders marched down the school’s halls, with teachers and others waving their final goodbye for the send-off to middle school.

This was the last day before summer vacation. On Thursday, Frederick County Public Schools students and teachers alike vacated the classrooms and rejoiced at the precious months they have to recharge their batteries.

At North Frederick Elementary, the fifth-graders performed the “clap-off,” a tradition carried over from the old school, which was demolished in April, said Principal DeVeda Coley. The fifth-graders go single-file and clap constantly all the way down from the upper floor into the cafeteria, to mark the transition to middle school.

“Just to show we’re proud of them,” Coley said as she watched.

One beaming father stood near Freddy the falcon, the school mascot, and kept an eye out for his daughter, who is to start middle school next year.

“That’s my little girl,” said Scott Day, pointing to his daughter, Brenna, who donned a pair of orange glasses.

“It’s special because they’re leaving, on to bigger and better things,” he said.

A teacher’s summertime could mean finding a second job or reflecting on lessons for the coming academic year. But they can finally have a little downtime, maybe take a vacation.

“I do enjoy relaxing. I do like being at home,” said Melinda Bassett, a prekindergarten teacher at North Frederick.

Bassett, who is finishing her 16th year teaching, said she took pleasure in seeing her students grow — physically, of course, but also diving into the content and learning some of the building blocks that will serve them throughout their education, such as sentence writing, reading, addition and subtraction.

The parents of third-grader Cody Mercer have planned quite a few trips for him, he said, including to Washington, to visit the zoo and the White House.

Then, right before school starts again in August, Cody will vacation in Ocean City for five days.

He’s never been to the Smithsonian’s National Zoo, and he doesn’t recall his trip to the Maryland Zoo in Baltimore, though he’s excited because he can still remember his time at the Pittsburgh Zoo & PPG Aquarium, which was really, really big, he said.

Second-grader Isabel Smith also might stay in Ocean City, she said. She enjoys watching the fish that sometimes wash up on the shore and the complex sand sculptures, such as the Great Wall of China.

Amid hugs, goodbyes, and the taking of selfies, a few stood crying as they waited for their school buses — some will attend Gov. Thomas Johnson High School, while others will splinter off to Oakdale High School.

But for seventh-grader Atticus Leibman, his only concern was starting tackle football. He’s pretty nervous, though he has played flag football for three years.

Atticus also participated throughout the year in Rachel’s Challenge, which encouraged others to write positive notes for classroom doors in the school.

“Before this year, I didn’t really ever think about how good it felt to get a high-five,” he said. “So now I take time to high-five as many people as possible to make them feel good, too.”

Seventh-grader Emily Jacob said she is looking forward to next year.

“The eighth-grade hallway kind of feels like it’s a different part of the school,” Emily said. “It’s away from the sixth and seventh [grades], and I feel like it will be a little more fun because you get to do more things.”

Both Barbara Stoltz and Collin Dempsey, seventh-graders, plan to attend a theater camp over the summer.

Stoltz starred as Dorothy in the middle school’s production of “The Wizard of Oz” this past year.

“It was a lot of ensemble, and learning how to be in a group,” she said. “Our theater teacher, this is her last year here, and she’s just so happy and I love her so much, and I am really going to miss her next year.”

Though technically the final day for the entire county schools was Thursday, the only high schoolers who needed to attend were those who had to make up missed exams, meaning most finished up Wednesday.

The environment on Wednesday at Tuscarora High School was much more laid-back than the hugging and cheering at the elementary school. Students, with their backpacks hastily slung over the shoulders, power walked toward the doors, to buses, and cars. Some stopped to hug, amid mumbles of “Thank goodness we’re done.”

As Principal Drew Kibler supervised the cafeteria, one student came up with a note excusing him for a dentist appointment, which just happened to be scheduled on the last day of school.

Rising high school seniors know that this summer break is their last with few responsibilities. Some will work summer jobs, and maybe fret about their final year, with college or the working world looming.

Adrianna Hill’s summer will be all sweet strumming and the tunes of Luke Bryan, Tim McGraw and Taylor Swift.

The 11th-grader is a self-described country music “obsessor” and has penciled in roughly 12 concerts.

Her mate at the lunch table, Keri Goto, also an 11th-grader, meanwhile, will try out for various plays over the summer at the Columbia-based Drama Learning Center.

She and 11th-grader Athena Panton rolled their eyes as Hill listed off her favorite concerts.

Goto wants to pursue her theater dreams at the California Institute of the Arts, and Hill wants to study nursing at Drexel University in Pennsylvania.

Panton has her eye on Boston University; she plans to study international business, and to travel. A military brat, Panton has lived in Japan, as well as “basically the entire East Coast.” Half of her family is British, and she’ll fly cross-country this summer for her uncle’s wedding, she said.

“But we’ve lived for four years in Frederick,” she said. “I get to finish out here. Lucky me.”