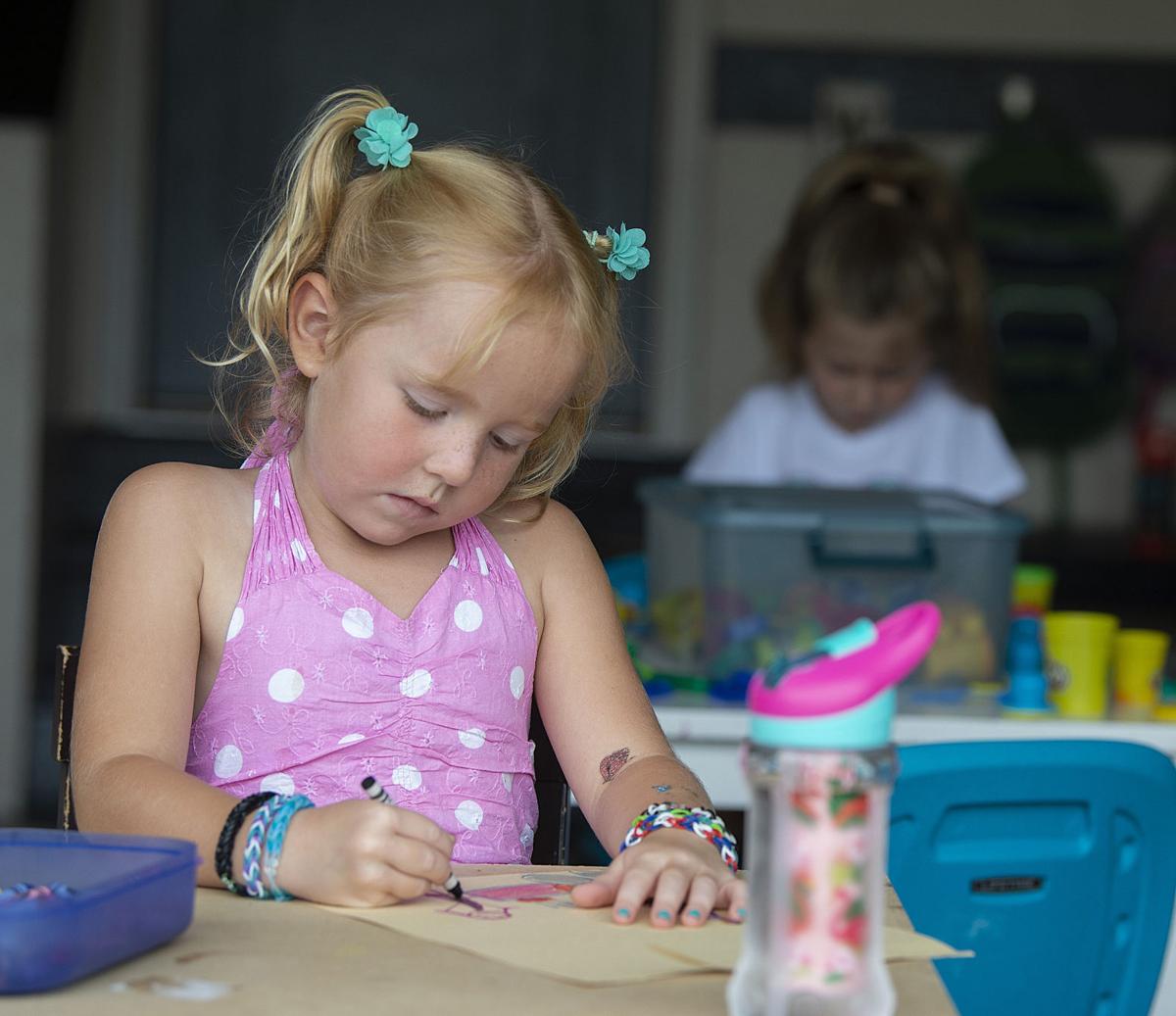 Emerson Weatherly, a student who attends New Market Elementary School, does schoolwork in a classroom created in her parents’ New Market home’s garage. 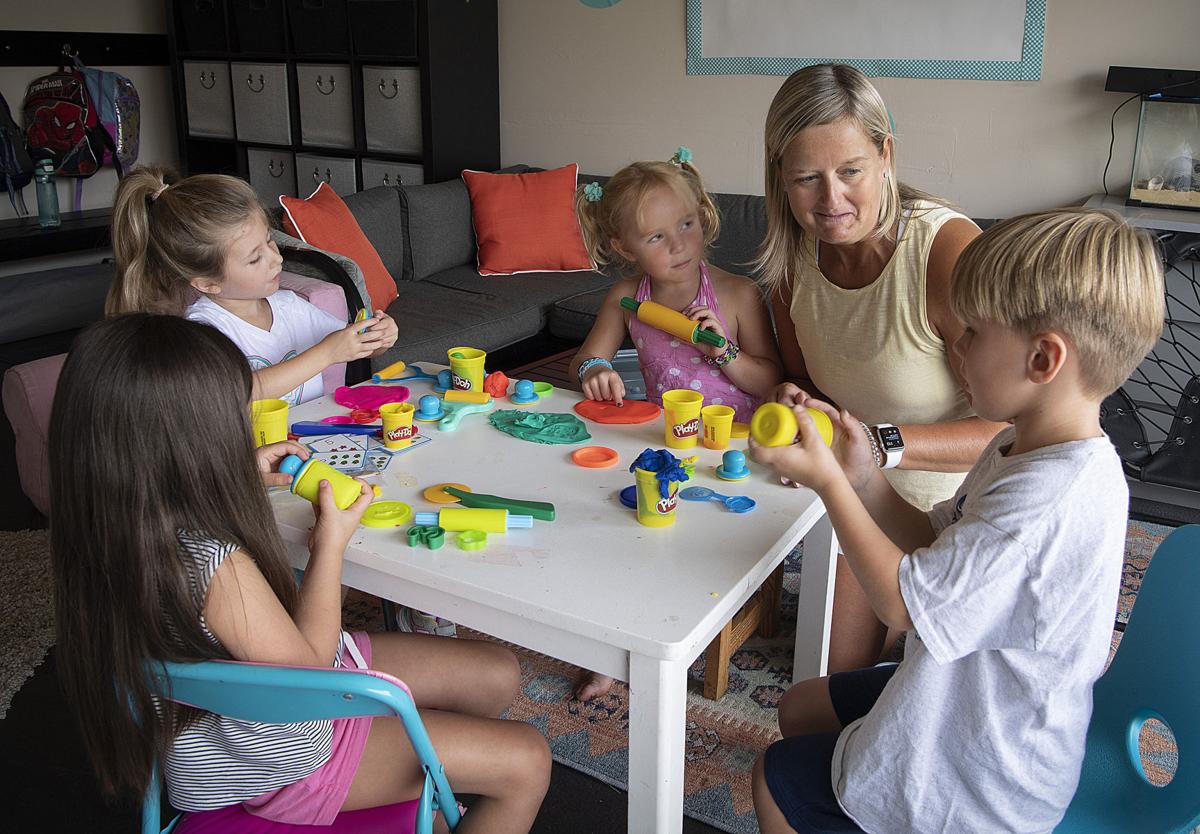 Kim Ragan, a pre-school teacher and who has also substituted for FCPS, works with kindergarteners and first graders in a classroom setting in a New Market resident’s garage Wednesday. The students complete schoolwork and continue the school day with activities both inside and outdoors. Learning pods, a new term that seems to have been coined during this age of virtual learning, most often refers to a group of students similar in age that come together to learn and get through the school day. Shown from left are Charlotte Cox, Scarlett Offenbacker, Emerson Weatherly, Ragan, and Henry Andrews.

Emerson Weatherly, a student who attends New Market Elementary School, does schoolwork in a classroom created in her parents’ New Market home’s garage.

Kim Ragan, a pre-school teacher and who has also substituted for FCPS, works with kindergarteners and first graders in a classroom setting in a New Market resident’s garage Wednesday. The students complete schoolwork and continue the school day with activities both inside and outdoors. Learning pods, a new term that seems to have been coined during this age of virtual learning, most often refers to a group of students similar in age that come together to learn and get through the school day. Shown from left are Charlotte Cox, Scarlett Offenbacker, Emerson Weatherly, Ragan, and Henry Andrews.

Scarlett Offenbacker's classroom this year is a garage.

It doesn’t look like a garage though. It’s well-decorated and there’s plenty for the 6-year-old to do. There are tables where she can sit with her friends, a shaggy rug where she can hear stories, and games on a bookshelf that she can play to learn her numbers and letters.

The garage is attached to the home of Alison Weatherly, a hairstylist in New Market who has three children in Frederick County Public Schools.

When the school system made the decision to go virtual for the first semester Weatherly became anxious about how at-home learning would go, recalling the stressful days of spring when her family struggled.

She shared her woes with Kim Ragan during a hair appointment one day and their learning pod was born.

Learning pods, a new term that seems to have been coined during this age of virtual learning, most often refers to a group of students similar in age that come together to learn and get through the school day.

Parents around the county are teaming up to create pods in their neighborhoods. Not only do they help with navigating the schedules and work of virtual learning, but many pods are also helping parents with childcare.

Those with young children who also work can benefit from a pod that is overseen by a hired professional like Ragan.

Ragan is a pre-school teacher and has also substituted for FCPS.

Ragan leads four pods in total including the one in Weatherly’s garage. The pods have a maximum capacity of 10 children and each pod meets two days a week for two hours.

For each enrolled child, the fee is $15 for each session.

Students meet with her, most often in the afternoons, to complete schoolwork and continue the school day in more of a classroom setting.

Ragan said the pods provide a social setting for young learners as well as a break for parents. The pod that Ragan leads in Weatherly’s garage is made up of Kindergarteners and first graders all of whom attend New Market Elementary School.

Scarlett who is a first-grader at New Market Elementary said she likes her new classroom because she gets to be with friends and play outside.

Online learning isn’t bad for her though. She likes that it’s quieter.

“It’s fun because you get to be online and you can see the teacher and everyone is on mute... sometimes in the classroom it’s noisy,” she said.

There is one down-side though—the teacher can’t always see her like in the regular classroom.

“Sometimes she can’t see you and you don’t get called on,” Scarlett said as she attempted to form hot pink Play-Doh into a unicorn.

In the garage though, Scarlett is always seen and Ragan is always just a step or a shout away.

The garage was initially transformed into an office at the beginning of the pandemic by Weatherly’s husband. When they decided to create a learning pod, Weatherly said she knew that she already had the perfect space.

“We said hey let’s open this up to the community...we talked to our neighbors and said who has a first-grader or Kindergartner who needs some extra support?”

Vanessa Andrew has two children who attend the pod in Weatherly’s garage. She had been worried about how her youngest child, who is in Kindergarten, was going to fare with online learning.

“He saw [his siblings] go to school and take the school bus and he was very excited for that...it was very hard to make him understand that [online learning] is actual school,” Andrew said. “And he just can’t sit in front of the computer for more than 10 minutes.”

Andrew said she knows the teachers are doing their best but feels the pod gives her son the sense of being in school, which he doesn’t get from simply sitting in front of a computer.

"My biggest thing was that I wanted [my daughter] to be able to maintain a classroom etiquette and I needed somebody else to be telling her what to do as a teacher does. Teaching is so much different when it comes from the teacher versus the parent,” she said.

There’s also the social aspect, which is known to be critically important for young learners.

Many of the parents who have children in Ragan’s K and first-grade pod also requested a second pod for second and third graders.

Ragan’s colleague, Heather Geisler, who also subs for FCPS is leading that pod.

“Parents that work or parents who don’t know how to support [their students]...Kim and I are that resource to come in and work with their kids on anything that maybe did not connect when they did the lesson with the teacher,” Geisler said. “Virtual learning is very difficult and it’s not for every student.”

In addition to helping the students complete their daily school work both Ragan and Geisler plan to provide enrichment learning and activities based on where the students stand academically and where their FCPS teachers plan to take them in the future with the curriculum.

“Once [students] understand the concepts they’re working on you want to move forward with them, but that piece is probably going to be missing over [virtual learning],” Geisler said. “If you’re in a pod the person running the pod can see where you’re at...and they can move forward working with you on other things, which is really important because you don’t want kids to get bored.”

School Superintendent Terry Alban said in an email that creative solutions, like learning pods, are important during such an unprecedented time.

“FCPS has always recognized the valuable role that families have in supporting a child's education. I appreciate the efforts of parents in collaborating to support students during virtual learning,” Alban said.

The learning pods seem to evoke the saying of “it takes a village” - with parents and families coming together to not only support their children but also each other.

“It just feels so good to help the other parents because we are all in the same boat, we’re all struggling,” Weatherly said.

The pictured children are all over age two so they (and the adult) should be wearing masks and they aren't supposed to be clustered so close to one another. The article mentions that three of them are siblings so they would be excluded from the mask/distance rules but the fourth child is unrelated as is the woman acting as the teacher.

[thumbup] Glad *you* said it

I really think that you need to change your name to GardenWhiner.

I love the creativity of parents and businesses in adapting to the restrictions placed on them. Where there is a will, there is a way.

If we had a president how was an actual leader and cared about American families, parents wouldn't need to be scrambling like this to figure it out by themselves. And what about families that don’t have a teacher friend or can’t afford another $15 per child per day? I guess that’s just too bad for them.

Trying hard to find that cloud around the silver lining, eh? I make a nice comment and you have to turn it into an anti-Trump statement.

Sorry seven, but as I pointed out before, if we insist on keeping schools closed to prevent spread, parents with the means to do so will always find a way to help their kids. Wouldn't you? While it may be politically popular among some to blame the President for the current situation, the actual blame goes to people that cannot follow four simple rules 1) avoid crowds, 2) keep apart, 3) wash your hands, and 4) wear a mask. That information has been broadcast on radio, TV, and print by health authorities since March. If those rules had been adhered to, the R0 of the viral transmission would have been less than 1, and the epidemic burn itself out. The virus only infects someone via close contact. There are no mulligans with CoViD-19. Get careless, get infected. 31% of the student body at UNC Chapel Hill are now infected after returning from summer break. Why? Because they ignored the simple rules, and didn't think through the consequences of ignoring those rules. Other colleges are seeing similar issues. Everyone has an individual responsibility to themselves, and others.

It also may be a fact to blame Trump since he admitted to lying after the Bob Woodward interview tapes were revealed.

Exactly Bosco. Not only do they get the supervised online education, they also get professional staff to work with them. It's too bad that Scarlett's teacher cannot see her. Is that a function of Schoology? Zoom doesn't have that limitation, and there is a "raise hand" button for the moderator to recognize a student that wants to respond. The moderator can also see all of the participants and focus on those struggling.