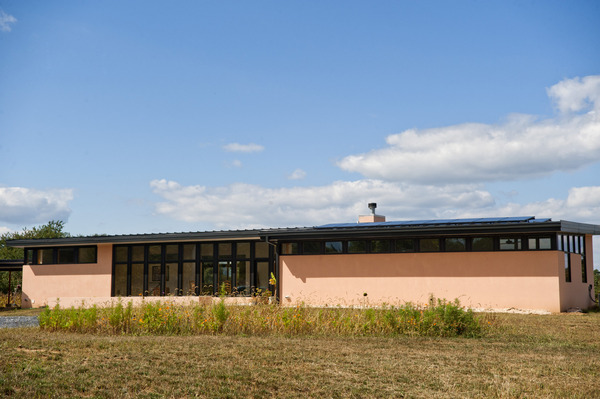 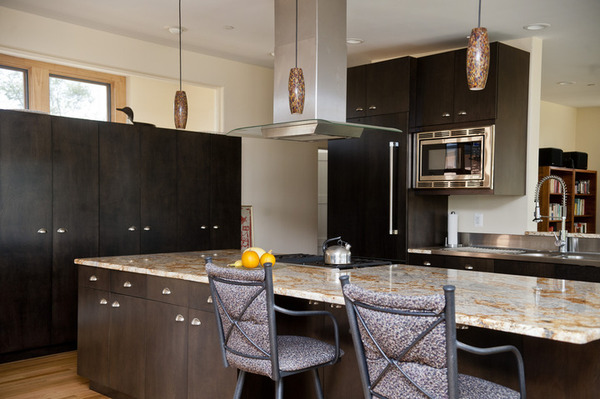 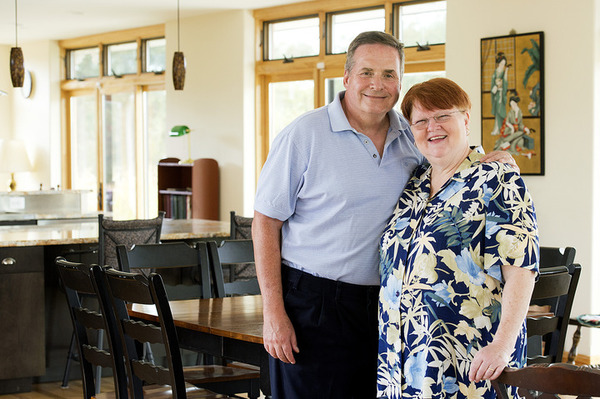 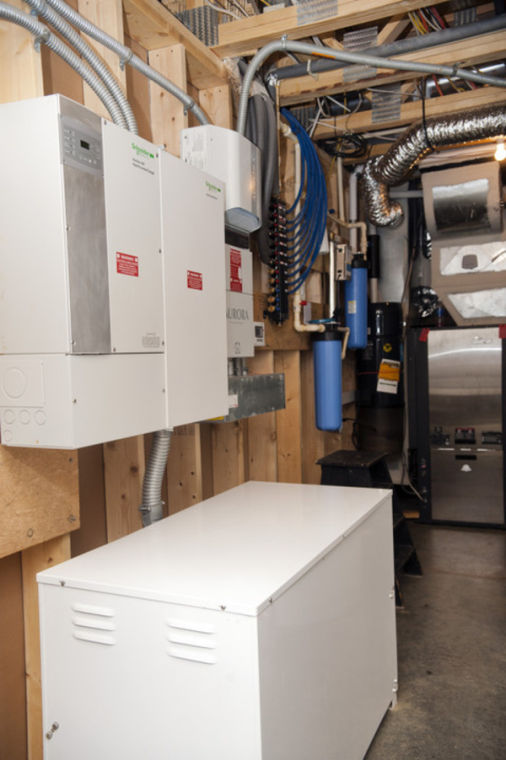 Dave and Mollye Silberstein's energy efficient home in Jefferson has control room in the basement that contains the power inverter and battery backups for the essential circuits in the house. Staff photo by Travis S. Pratt 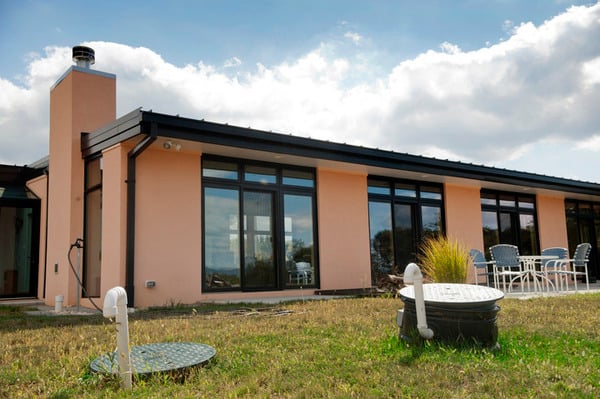 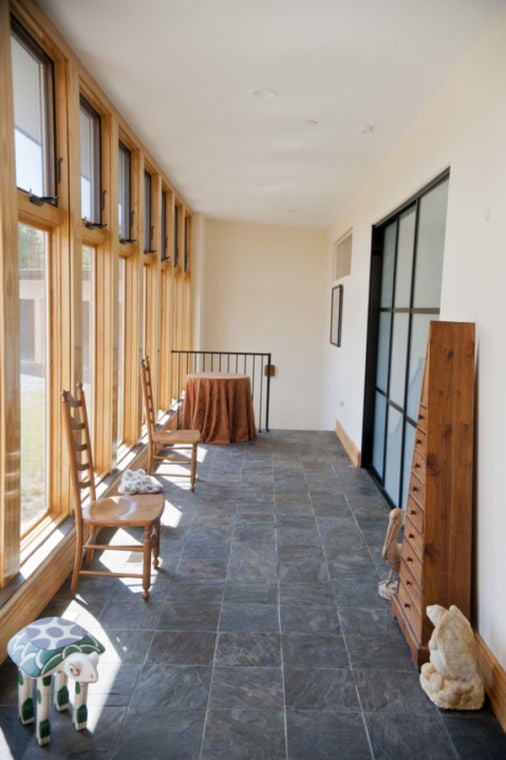 Dave and Mollye Silberstein's energy efficient home in Jefferson has a bank of floor to ceiling windows that receive full sun during the day which heat the slate flooring to that retain the radiant heat naturally. Staff photo by Travis S. Pratt 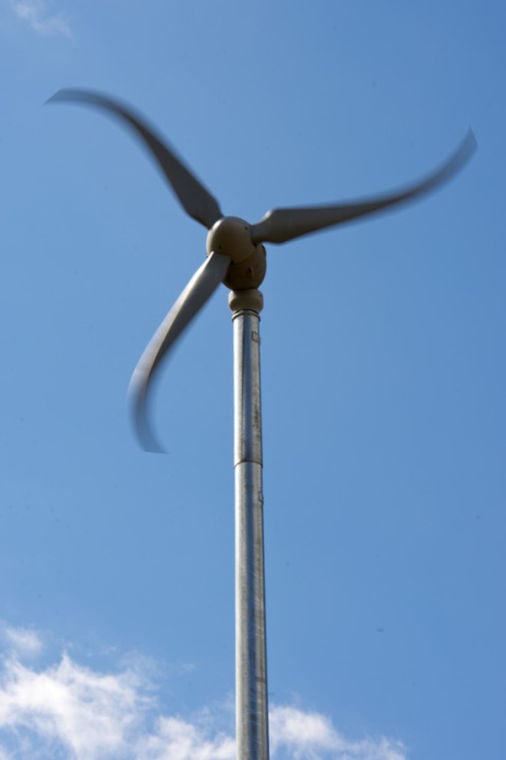 Dave and Mollye Silberstein's energy efficient home in Jefferson uses a wind turbine to produce electricity which is stored in batteries for later use and often produces energy that can be sold to the grid. Staff photo by Travis S. Pratt

Dave and Mollye Silberstein's energy efficient home in Jefferson has control room in the basement that contains the power inverter and battery backups for the essential circuits in the house. Staff photo by Travis S. Pratt

Dave and Mollye Silberstein's energy efficient home in Jefferson has a bank of floor to ceiling windows that receive full sun during the day which heat the slate flooring to that retain the radiant heat naturally. Staff photo by Travis S. Pratt

Dave and Mollye Silberstein's energy efficient home in Jefferson uses a wind turbine to produce electricity which is stored in batteries for later use and often produces energy that can be sold to the grid. Staff photo by Travis S. Pratt

When Mollye MacLeod finishes washing dishes, she takes the unused water and saves it to water her plants.

"For years, I've pushed the envelope on recycling," said MacLeod, who learned from her mother who spent years saving milk cartons just in case they became recyclable.

Recycling and sustainability have always been a way of life for MacLeod, and last year, she and her husband, David Silberstein, decided to take it up a notch when building their new home in Jefferson.

Their house contains 18 235-watt solar panels along its roof; a 45-foot wind turbine; a geothermal heating and cooling system; a bank of 8 deep-cycle batteries; a hybrid inverter with a charge controller that manages the conversions and switches the house to battery power during power outages; and several other passive systems that were also specifically designed to promote sustainability.

The house will be featured in the Maryland Tour of Solar and Green Homes on Saturday, Oct. 5, and Sunday, Oct. 6. It was built on 30 acres of cornfields â€” which are now managed by a local farmer â€” by the Gaithersburg construction company Sustainable Design Group, with John Spears as the lead architect. Silberstein said he and MacLeod worked closely with Spears on the home's construction, which started in February 2012 and ended that October.

Silberstein said the idea of the home was the brainchild of his wife, who has worked as a chemist. He said the two of them have moved several times during their married lives, from New York City to Boston to Pennsylvania, then back to Boston to Sweden to Wilmington and finally to Jefferson, all due to Silberstein's job as a scientist for a pharmaceuticals company.

"This is the first time that we found a really nice house that we wanted to live in for a long period of time," said Silberstein, who is now retired but is starting his own consulting business.

In addition to the solar, wind and geothermal features, the mid-section of the contemporary ranch-style home's roof was built slanted in such a way as to catch rain. This water then goes down a pipe that leads to a 3,000-gallon rainwater tank, which the couple uses for gardening and even drinking.

The couple explained that their geothermal field works through an underground pipe, where the earth stays a level 55 degrees. They said this even temperature pulls heat out of the earth in the winter and puts the heat back into the earth in the summer.

"It's a heat exchange that saves energy," Silberstein said. "We wanted self sustainability. We wanted it partly for ourselves and partly as a demonstration to show what's possible, because we're going to need it in the future."

The couple said they are exercising this demonstration aspect through participating in the solar homes tour and also by hosting school groups, including a Virginia private school whose honors sixth grade class visited recently.

Aside from educating others and living sustainably, the couple is also saving money on their energy bill. They said while the bill is usually between $50 and $100, they said they earn money back from their power company through a meter that indicates when they are making more power than they are using. They said they recently received a $150 check through this system.

Along with the complex design of the home's exterior, its interior is equally intricate. It includes slate flag stones in its sun room, which MacLeod referred to as the home's "solar collection room." She said these stones absorb and retain heat from floor-to-ceiling windows, which helps to heat the house.

The house also contains a solar greenhouse with an endless pool, a copper shower, all Energy Star appliances, low-flow plumbing fixtures, a fireplace designed to replace heat in the winter, and highly insulated and air-sealed roofs and walls.

And with all these features, MacLeod said she had another favorite aspect to the house.

"The views are everything," she said, continuing that their children are just as impressed. "They say it's like coming to the spa; for them it's a vacation spot."

Silberstein said the science behind the home's construction presented no major obstacles. The only difficulty was the fact that a lot of "firsts" were involved, meaning specialty vendors had to be brought in.

"You had to pull together a lot of people who weren't used to working with each other," he said.

The couple said they are looking forward to being part of the Maryland Tour of Solar and Green Homes, especially if its attendees are considering similar projects on their own homes.

"If we show them something that's working, and they go ahead and do it, that's a good feeling," Silberstein said.

For more information on the tour and the other homes participating, go to http://mdgoesgreen.org/solar-tour.

Tour booklets containing the houses can be downloaded at http://mdgoesgreen.org/solar-tour/ or purchased for $2 at the following locations: