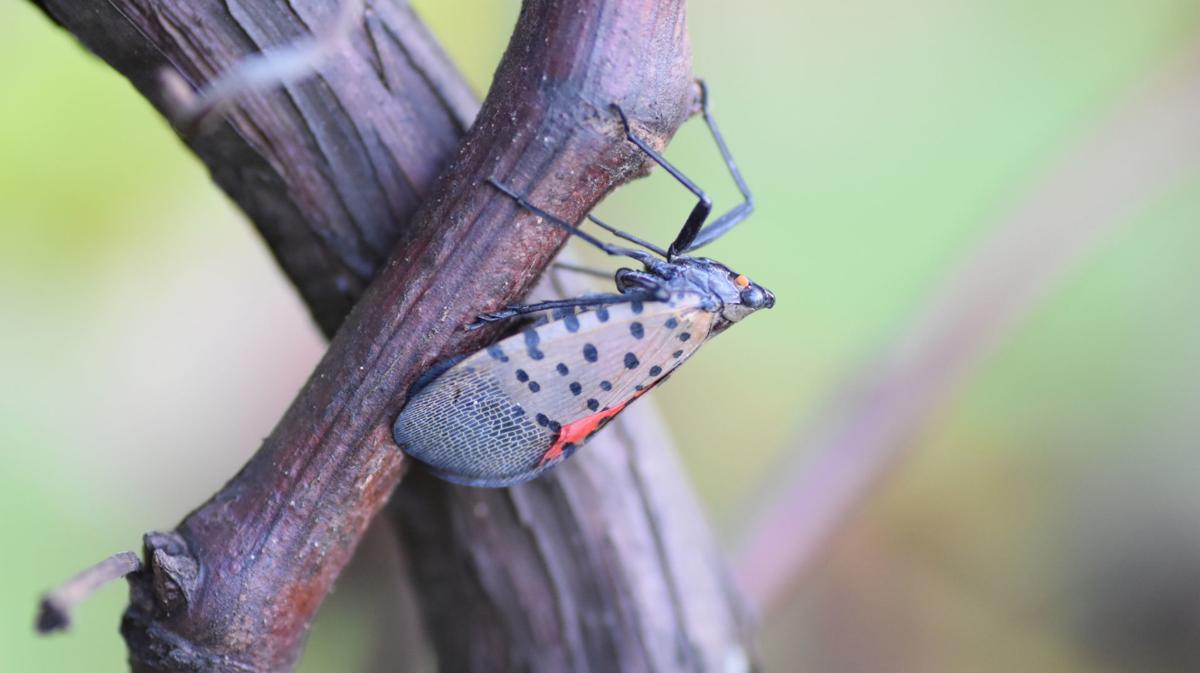 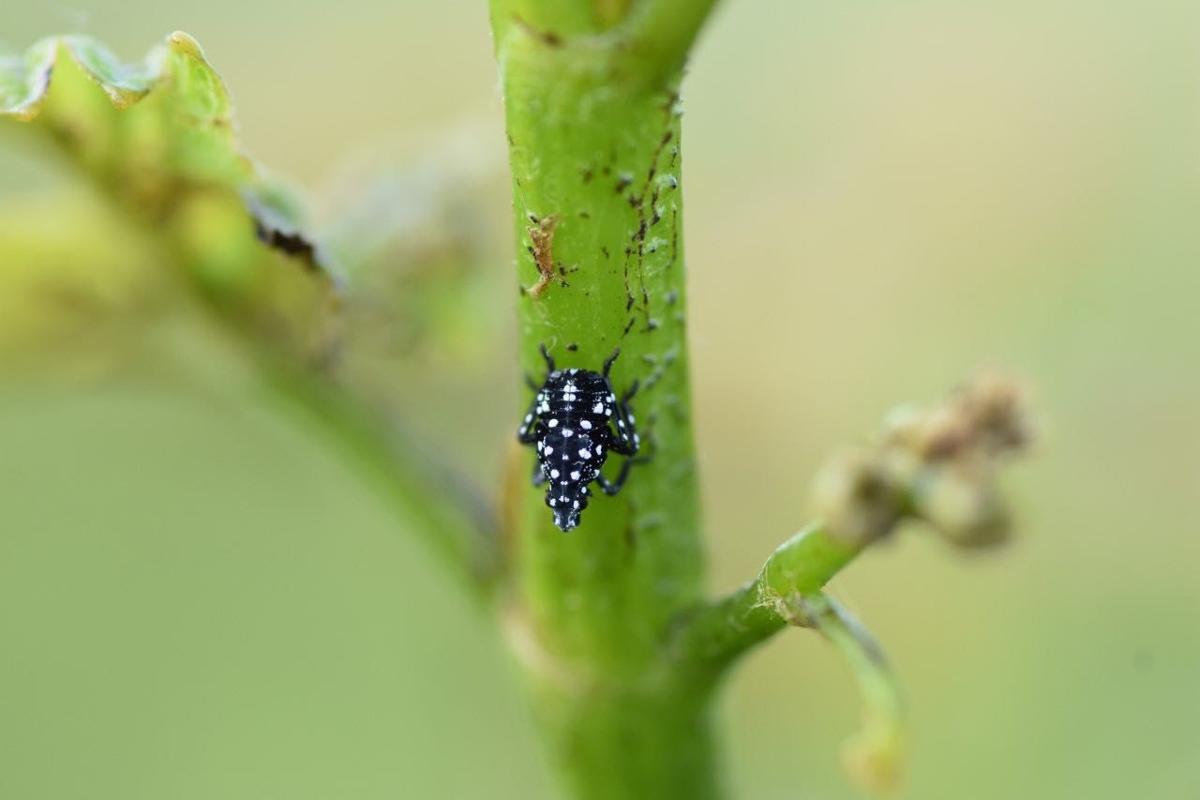 A young spotted lanternfly before it has developed wings.

A young spotted lanternfly before it has developed wings.

When the spotted lanternfly reaches Maryland, trees could be among the biggest losers.

To get ahead of the problem, members of the Frederick and Washington county forestry boards are teaming up on Friday to discuss the risks posed by the invasive pest at a half-day workshop at Fox Haven Farm.

Since the first spotted lanternfly was identified in Pennsylvania in 2014, populations have been established in Delaware, New Jersey, New York and Virginia. With strict quarantines in place, the spread of the bug has been relatively slow. But the probability of the bug reaching Maryland is a question of “when,” not “if,” said Aaron Cook, a forester for the Maryland Forest Service.

“It would be foolish to think it won’t come here,” Cook said in an interview on Wednesday.

The Maryland Department of Agriculture is the lead agency monitoring the movement of spotted lanternflies in Maryland, but the Forest Service stays abreast of potential threats to the state’s forests. Because the pest is an intensive and indiscriminate feeder with at least 70 known hosts, it is believed to pose a real threat to the health of trees and profitability of the state’s timber industry, he said.

Hardwood forests will be at particular risk after the spotted lanternfly arrives.

A majority of the state’s deciduous forests are made up of hardwoods, which are popular for making furniture and cabinets, Cook said.

Complicating the situation is that while the timber is harvested in Maryland, it is then shipped out of state to be milled and back into the state to be shipped out of the Port of Baltimore. This in-and-out movement of timber could be diminished if the spotted lanternfly arrives and a quarantine is put in place.

Controlling the pest will not be easy, either. Spotted lanternflies are a “leafhopper” species, which have thwarted forest managers in the past, Cook said.

In the 1980s and 1990s, a blight of Dutch Elm disease hit Maryland. The cause: beetles moving a fungus from tree to tree.

Using a combination of integrated pest management and insecticides — timed with major weather events, which dictate the beetle’s life cycle — the state was able to regain control. Then, the state was hit by a wave of elm yellows — a disease that kills the crown of elm trees — but, this time, there were no simple solutions.

Elm yellows is passed from tree to tree by leafhoppers, whose life cycles are not tied to the temperature. The spotted lanternfly is also a leafhopper, and because of its feeding style — which includes piercing the plant to extract nutrients — it is likely to pass diseases freely, like a “dirty needle,” between the many trees it feeds on, Cook said.

Before the bug can get a foothold in Maryland, tree experts are hoping to educate landowners on how to identify it and its egg masses.

Dan Yates, an arborist for Bartlett Tree Expert Co. in Frederick County, will sit as a panelist at Friday’s event. He has been in regular communication with the company’s Philadelphia office, where the spotted lanternfly is already established. What the company has seen so far, is the bug is most attracted to Red Maples — a popular tree in urban landscapes — and the non-native Ailanthus, also known as tree-of-heaven.

Tree-of-heaven originates from China, where the spotted lanternfly is also native. The tree was introduced to the U.S. as an ornamental plant in the 1780s and is ubiquitous on many properties, which wasn’t a problem until now.

With the impending arrival of the spotted lanternfly, Bartlett Tree Experts is working with landowners to remove 90 percent of the Ailanthus on their land. The remaining 10 percent are left and treated with insecticides, to act as “trap trees,” that kill any eventual hosts.

The company also regularly inspects properties for spotted lanternfly egg masses, Yates said. The eggs are laid in gray sheets and look like dried mud. The eggs can be laid on any surface, including patio furniture, trailers and wood piles — which makes unintentional transport of the species to new areas even more likely.

With the spotted lanternfly now surrounding most of Maryland, it is even more important to educate the public about the pest.

“Be vigilant. The more people that are looking for it and scouting for it and obeying the quarantine, hopefully the less impactful,” Yates said.

What: Hear from entomologists, viticulturists and arborists on the likely impacts of the spotted lanternfly in Maryland. This invasive pest is currently found in Delaware, New Jersey, New York, Pennsylvania and Virginia.

Details: The cost to attend is $20. Pre-registration through Fox Haven Farm's website is requested.

Lord of the Flies: Researchers try to get ahead of invasive Spotted Lanternfly

When it comes to invasive insects, most people have the luxury of saying, “Don’t bug me.”

This little leaf hopper feeds not only trees but hops, vineyards, ornamentals, fruit trees, etc. the question is if ailanthus is present is it the tree that allows the spotted lanternfly what it needs to reproduce. question are other trees like sumac the sap in these trees allow this insect to reproduce. time will tell.

"What the company has seen so far, is the bug is most attracted to Red Maples — a popular tree in urban landscapes —" -- if you don't read anything else, take note! This is a wonderful tree in all seasons! "Tree of heaven" is no longer recommended but there are lots of them. I forget what its negatives are. But like Bradford Pear which was highly touted at one time and was found to self destruct in wind as it matured into a vase shape, t of h has some issue.

Everything these days are "Made In China" even the environmental destroying BUGS! Think! how come China does`t spray their shipping containers before leaving their Country? My dear POTUS knows the answer to that question[smile]