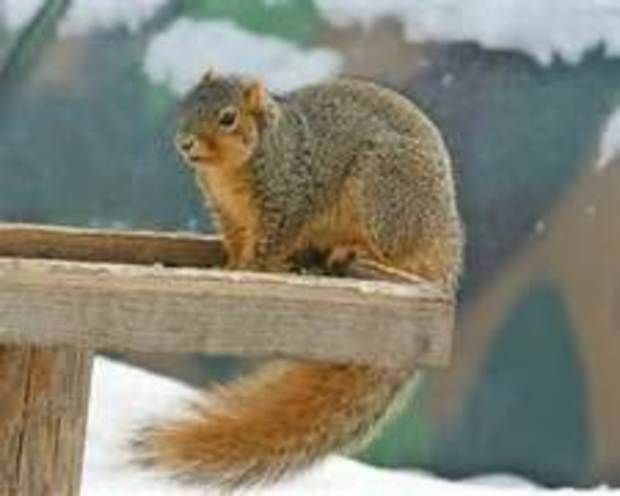 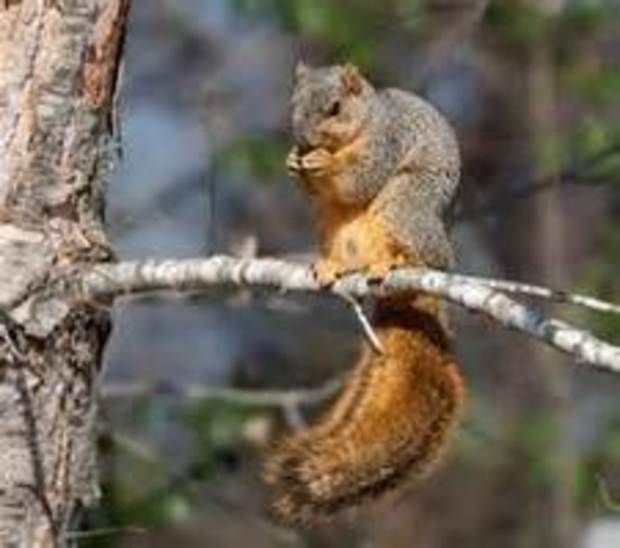 This big squirrel does not have drab gray or blackish coloring; rather it looks reddish like a fox and has a large bushy reddish tail. What you are looking at is not a gray squirrel but a fox squirrel. (Sciurus niger).

Fox squirrels are found throughout the East (except in New England) westward to the Dakotas. Fox squirrels are the largest of the tree squirrels found in North America. They can be almost 15 inches long and weigh up to 3 pounds as adults.

Both the male and female grow to be about the same size. Fox squirrels prefer open forests with large trees that surround other habitats such as fields, crops, swamps, or waterways. The fox squirrel has a diverse diet, eating both plants and animals such as insects, bird eggs etc.

However, in the winter the squirrel is dependent on nuts like acorns, hickory nuts, pine seeds, and walnuts. Fox squirrels spend a lot of time on the ground compared to other squirrels, but they are excellent climbers.

Because of its larger size, the fox squirrel has few predators other than raccoons, bobcats, and large raptors like hawks and owls. The main cause of mortality in fox squirrels is hunting, starvation, and mange.

The fox squirrel is mostly solitary; they only pair up for mating. The young are normally born in December and January, and they are ready to leave the nest the following spring. Fox squirrels will nest in large tree cavities, or they will build nests at the top of the tree. Fox squirrels have very good eyesight and are very wary; for this reason it is uncommon to see one. The best places to see fox squirrels in Frederick County are along the C&O Canal, Monocacy River, and Catoctin Creek.

As part of an effort to protect remaining populations, the Maryland Department of Natural Resources purchased land in 1945 and created the LeCompte Wildlife Sanctuary. This squirrel was placed on the Threatened and Endangered Species list in 1967; hunting was banned in 1971.

At the time the largest concentration of Delmarva fox squirrels was found in Dorchester County in the Blackwater Wildlife Refuge, although smaller populations were found throughout the region. A program to re-introduce this squirrel to suitable habitats was initiated from 1978 - 2001. This has been successful in increasing the populations. Despite these efforts the Delmarva fox squirrel remains on the list of Threatened and Endangered Species.

Nature Notes articles are written by members of the Frederick County Forestry Board. You can contact the column editor, Ginny Brace, at kgardner@newspost.com. Please put Nature Notes in the subject line.