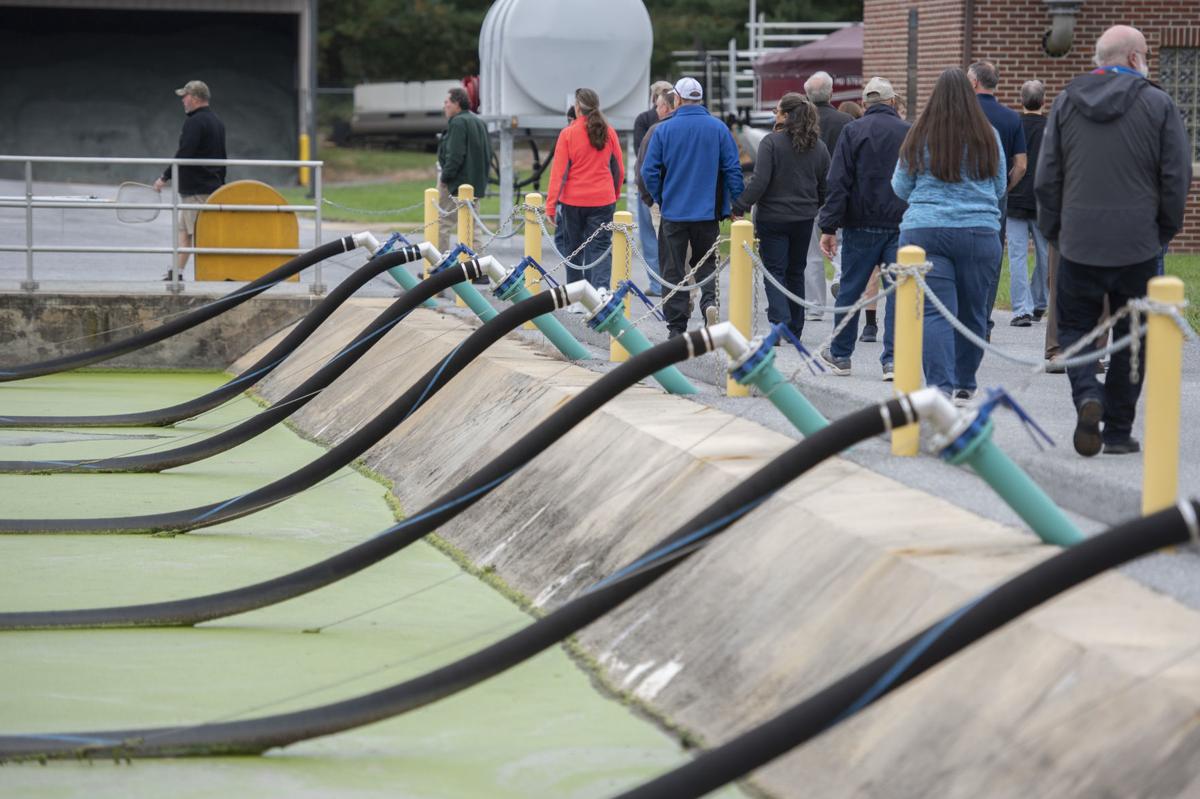 A group is lead past an aeration tank during a public tour of Middletown’s wastewater treatment plant. 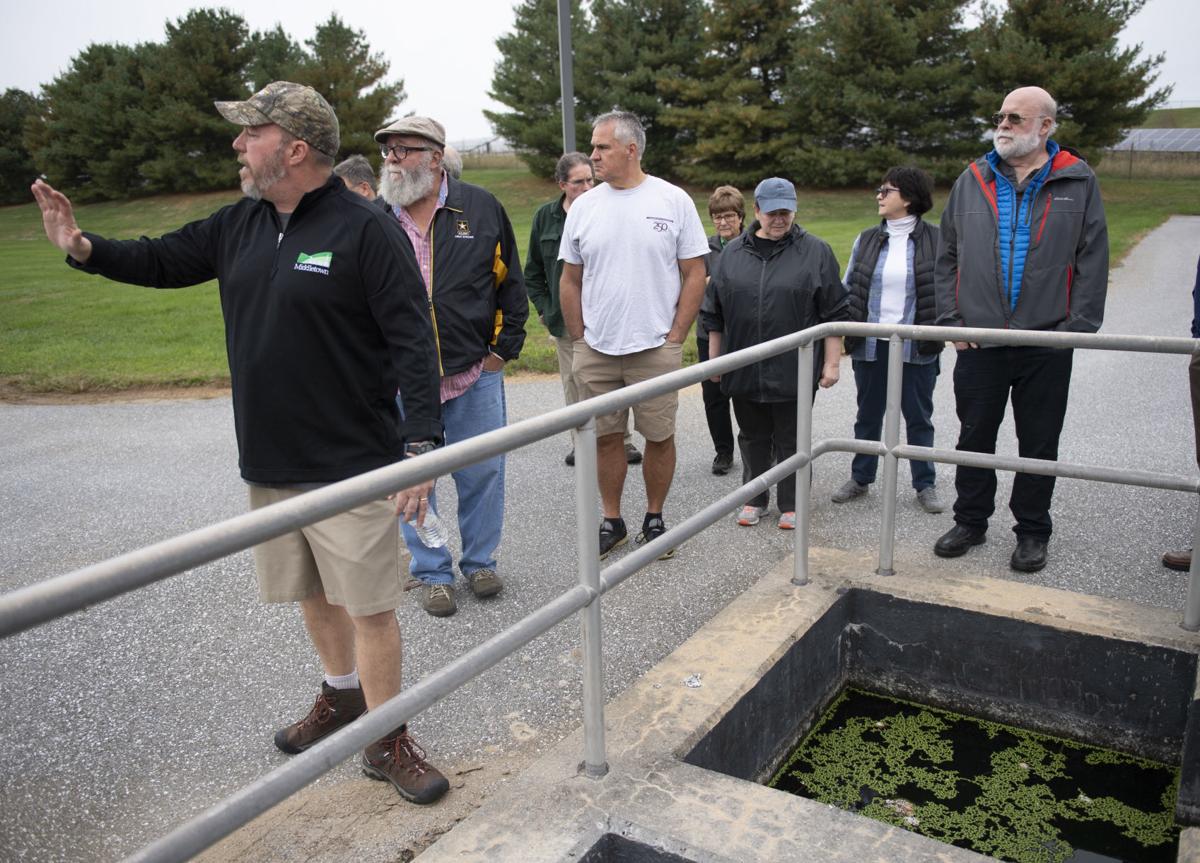 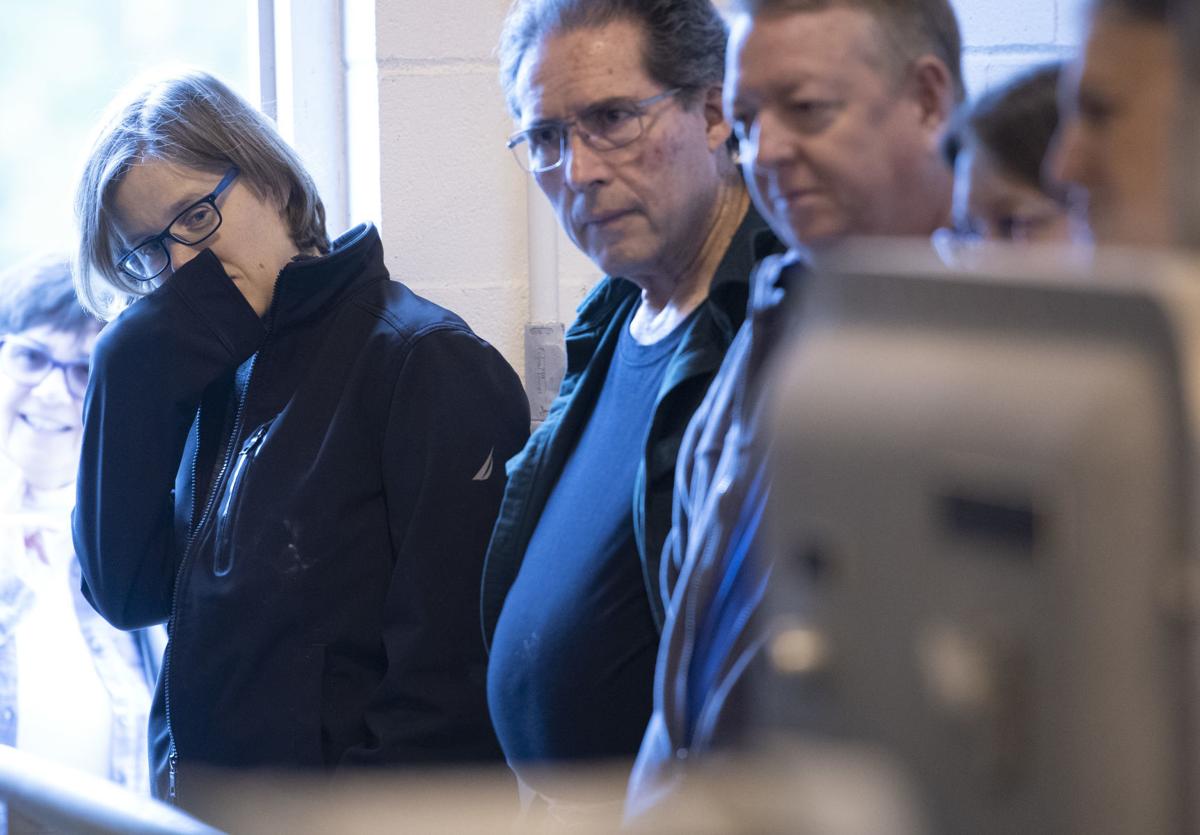 Kate Wolfer covers her nose as she and others endure the smell of a building at the Middletown wastewater treatment plant.

A group is lead past an aeration tank during a public tour of Middletown’s wastewater treatment plant.

Kate Wolfer covers her nose as she and others endure the smell of a building at the Middletown wastewater treatment plant.

Some like to wake up to the smell of coffee. Others bacon.

But for the select few who toured Middletown’s wastewater treatment plant Saturday morning, it was the smell of sewage that woke them up.

And it was pungent inside of the wastewater treatment plants where sewage water started the cleaning process.

Some on the tour stepped outside for a large inhale of fresh air before heading back in the building.

It is beneficial for residents to see where their money goes so they can better understand what they pay for their bills, Bowen said. The average Middletown resident pays $40 per month for sewer.

The Middletown wastewater plant is expandable, Bowen said, although there are no current plans to expand it.

To clean the water, the town uses a chlorine disinfectant that ends up being filtered out as well. They do this because the water cleaned at the plant has to exceed the required standards so the water can be used at the Richland Golf Club to irrigate the grounds.

The water goes to Richland during the spring and summer months when the golf course sees its busy season and the grass needs to be watered more often, Bowen said. And because the water comes from the wastewater treatment plant, the golf course can use it in a drought.

Cleaning the water requires a lot of air. Water flows into an aeration tank where oxygen is added. This causes biomass, which is organic matter, to grow. Biomass is a living set of organisms and they need food to grow. That comes from the human waste.

When the Middletown plant was first built, the town had to buy molasses to encourage biomass to grow.

The water in the aeration tank looks thick, with Bowen calling it chocolate milk. The technical term is “mixed liquor,” he said. Because of all the air put into the tank, if a person fell in, they would not float.

From the aeration tank, the water begins to separate. The sludge, made of the biomass, sinks to the bottom of the next tank and is sent back to the beginning of the cycle. Clean water is siphoned off the top.

If the biomass dies, it goes into another tank called a wasting tank. The dead sludge is then sent to a reed bed, where reeds use the nutrients to grow. Every winter, when everything freezes, the reeds are cut and burned. They pop up again the next year, Bowen said.

Every three years, the dirt from the reed bed is dug up and sent to a landfill. Because of Maryland’s regulations, that dirt cannot be used on farms, he said.

The clean water then goes to a filtration tank, which Bowen described as a big coffee filter. Once it goes through that process, it is considered clean.

“It looks almost like drinking water,” he told the group. “It’s that clean.”

Inside the filter building, there’s an automatic sampler that tests the water every 30 minutes, he said.

From the filter building, the water flows outside, where it goes through final steps. Here the water is either sent to a stream near the plant or to the golf course. If it goes to the stream, it flows down a set of stairs, creating a waterfall effect that aerates the water.

One of the people on the tour was Middletown High School teacher Sharon Steger. She attended the tour because she wants to bring her environmental science class to tour the plant, Steger said.

The tour was “awesome,” she said, and she thinks it would be beneficial for the students to see it while they do a water unit.

“I just think they need to have some real world applications of curriculum,” she said.

Funny how no one can stand the smell but they have no qualms about building such a plant in someone else's back yard.

Very good program. Tours should be given of water treatment plants, too, so people can see where their drinking water comes from and what processes are used to purify it. Who knows they might stop buying stinking bottled water and throwing the plastic bottles away. Electric companies should give tours of their power plants too, so people can see how that is made. Of course you cannot see the electricity like you can see the water, but you can see how tons of material comes in one end of the factory (coal and air) and the same tonnage of material (ash and gas) goes out the other end. Some people think coal turns into electricity and there is nothing left over. The exact opposite is true.

Most people flush the toilet with little thought where it goes. I use to work on equipment used at theses facilities to include New York and Houston. . Never get use to the odors.

Wait, they extra clean the water so it can irrigate a golf course? So if it wasn’t for the golf course, then you just get plain cleaned water? Does this not make sense to anyone else?

Never mind, I get it now.

It makes sense to me. I now see that you understand but for those who may have the same question... They are not cleaning up the wastewater to meet drinking water standards. That would be a different plant completely. They are cleaning up the wastewater up to meet permit limits (based on TMDL standards) for discharge to the river. The fact that they have a customer for the treated wastewater means they need to clean it up enough for that specific use. The question you should be asking is "does it cost the tax payers more to treat it to the level to be used on a golf course or does the money they get for traeting the water and selling it to a golf course help lower the costs of treatment for everyone else?"

Where their money goes???