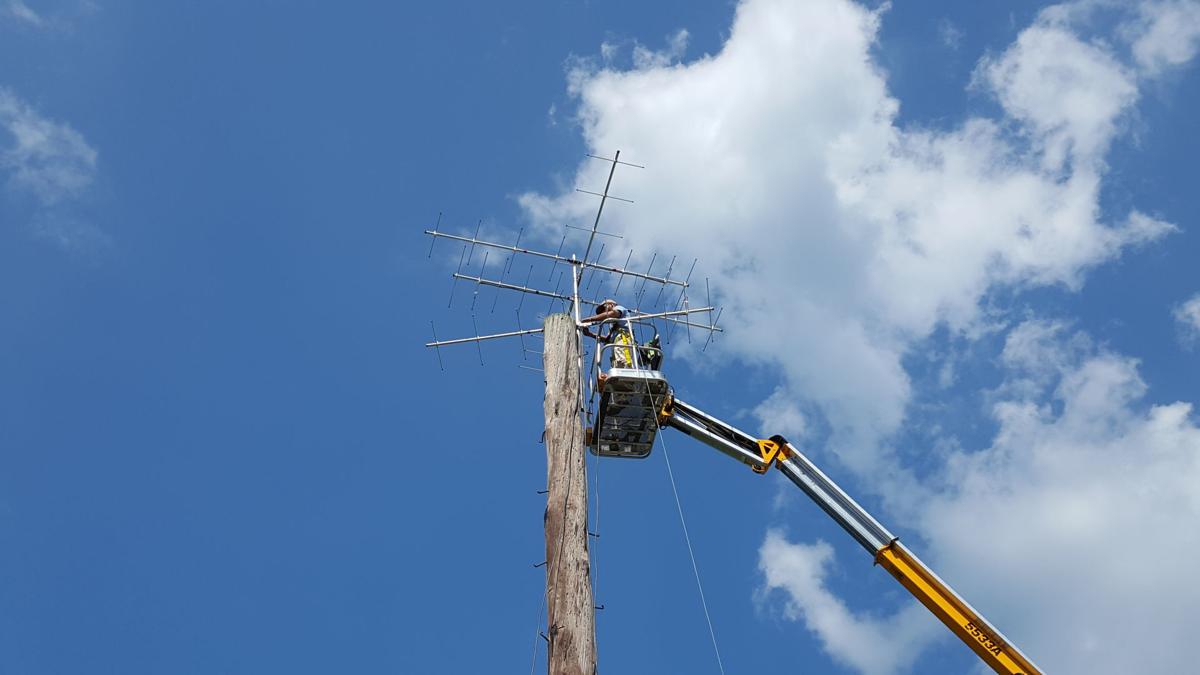 A man installs an antenna atop an abandoned pole. The antenna is part of the Motus Wildlife Tracking System, which detects the unique digital fingerprint of nanotags on passing birds in order to track their migration pattern. 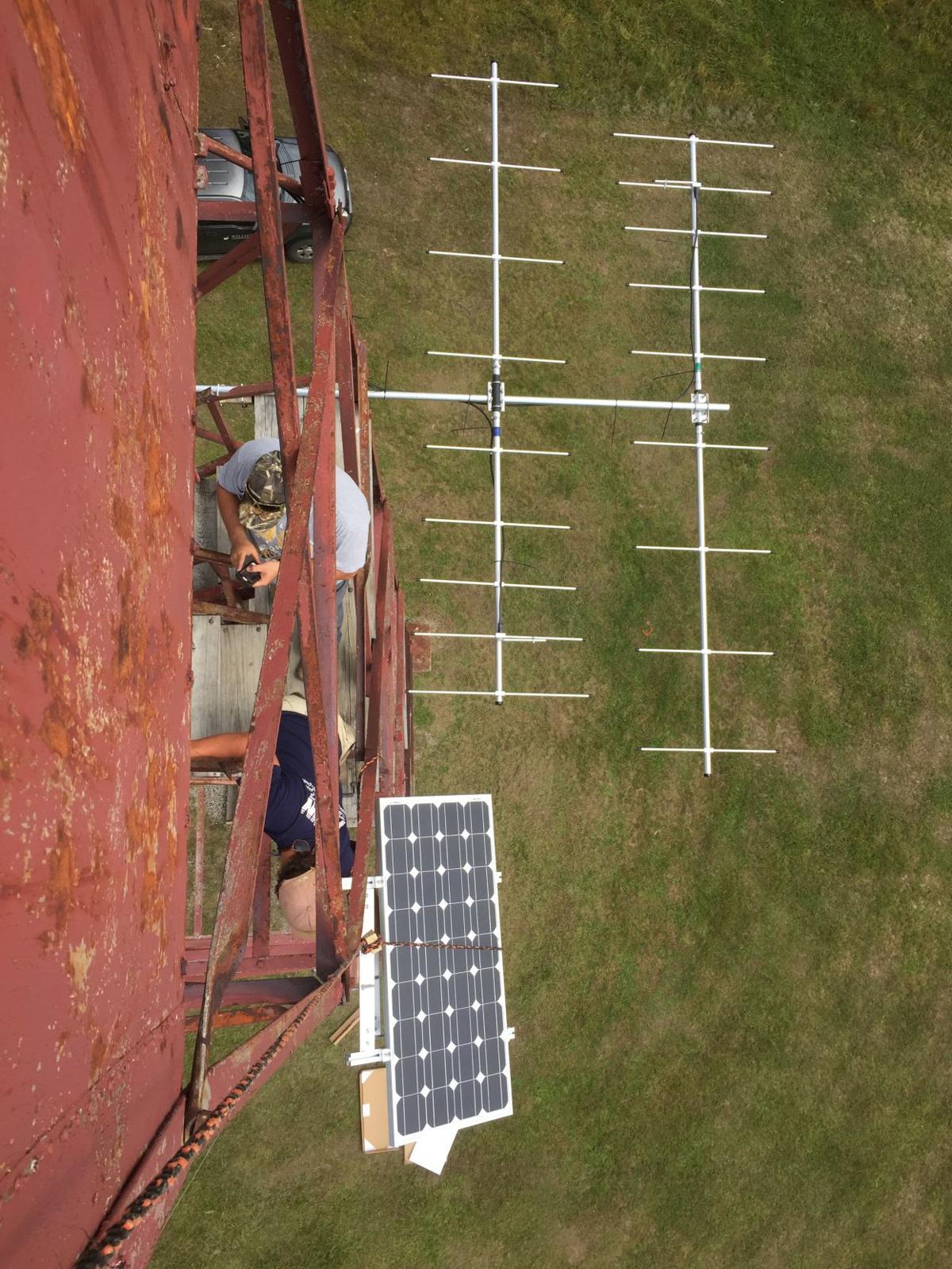 Two men install an antenna off the side of a fire tower in Pennsylvania. The antenna is part of the Motus Wildlife Tracking System, which detects the unique digital fingerprint of nanotags on passing birds in order to track their migration pattern. 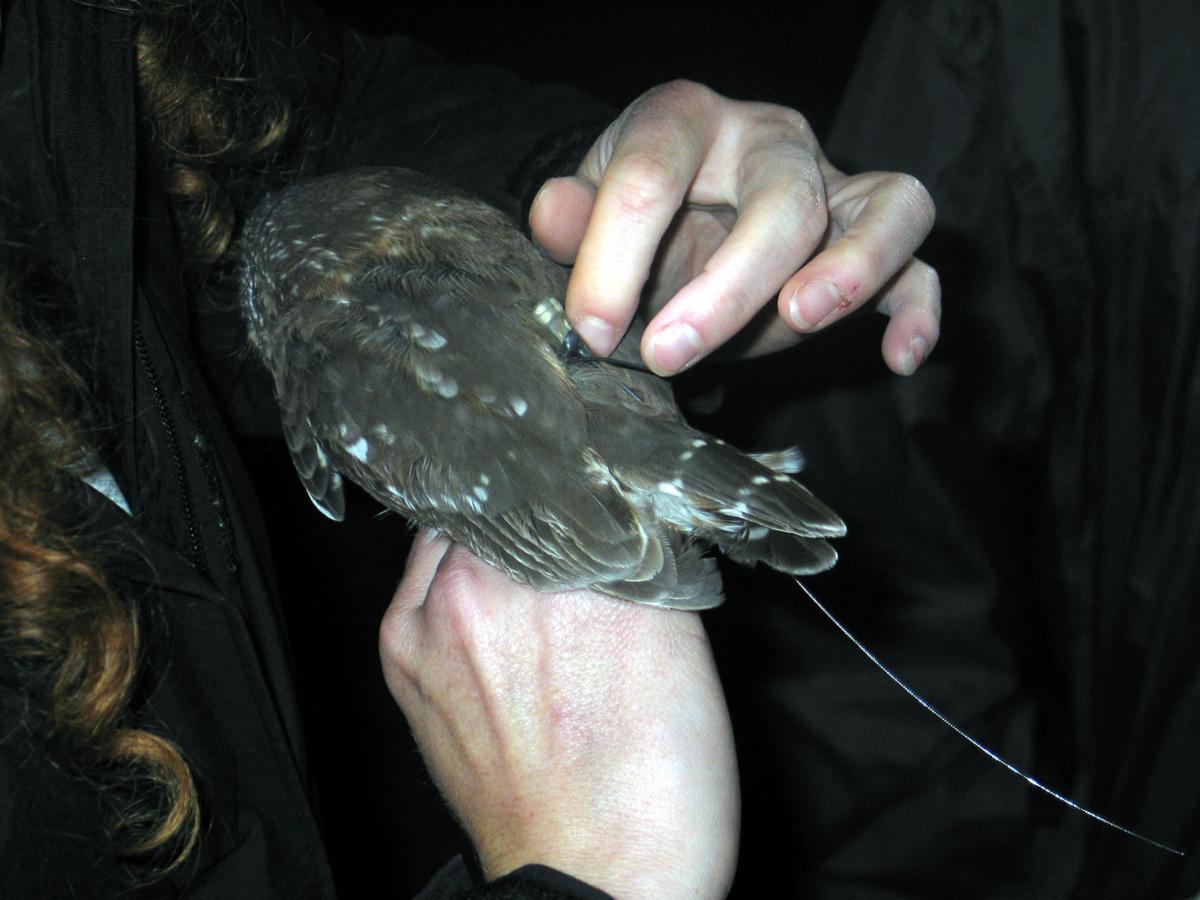 A woman holds an owl after a nanotag is attached to its back.

A man installs an antenna atop an abandoned pole. The antenna is part of the Motus Wildlife Tracking System, which detects the unique digital fingerprint of nanotags on passing birds in order to track their migration pattern.

Two men install an antenna off the side of a fire tower in Pennsylvania. The antenna is part of the Motus Wildlife Tracking System, which detects the unique digital fingerprint of nanotags on passing birds in order to track their migration pattern.

A woman holds an owl after a nanotag is attached to its back.

A collaboration between local bird scientists might be the only situation during which building fences can actually bring people closer together.

Known as the Northeast Motus Collaboration, the group of ornithologists is constructing “fence lines,” which are networks of communication towers designed to detect the unique digital fingerprints of nanotags attached to backs of songbirds, bats and pollinators. Nanotags are the future of bird tracking and are already lifting the veil on the least-understood migrations.

Dave Brinker, a regional ecologist in Maryland’s Wildlife Heritage Service, is one of the people at the forefront of the project. Brinker has banded birds for more than 40 years with little more than chance determining if he or another scientist would capture the same bird.

“There’s a lot of parts of it we still don’t understand,” Brinker said of migration.

With a $500,000 grant from the U.S. Fish and Wildlife Service, five states will now work together to create a network of transmitters that will log the movement of species from southern New York to Maryland. The 46 automated telemetry receiver stations are just the beginning of what the research team hopes will someday be a robust network of antennas that will map birds as they fly from Canada to Central America or beyond.

Established in 2013 by Bird Studies Canada, the Motus Wildlife Tracking System is the first tool that researchers have had to efficiently track the migrations of small birds, bats and insects.

Using the old metal banding process, researchers played a game of numbers. In the forest they would let hundreds of birds “blunder into nets” and band them with identification tags, Brinker said. Then, the birds would be released with the hope that at least one would appear again in some other researcher’s nets.

But even if one bird was recovered a second time, the best that could be done was to draw a line between Point A where it was banded and Point B where it appeared again, Brinker said.

Then, Tom Erdman at the University of Wisconsin had an idea for how to attract more birds — owls in particular. He started playing the owl’s breeding call in the fall and suddenly what had been an average of 60 birds turned into an average of 600 captured birds. That’s a 10-fold increase.

The more recent advancements in nanotag technology has improved those chances by close to an order of magnitude, Brinker said.

That’s because instead of people and nets, the nanotags are able to detect whenever a tagged bird flies within 9 to 10 miles of a tower.

While the final locations of the 46 new towers have not been selected, it is expected that Maryland will be able to stretch a fence line of antennas from Garrett County to Assateague, Brinker said.

The state of Pennsylvania has been key in designing these “fence line” or “array” networks of transmitters, which other states and migration corridors are now emulating, said Lisa Kiziuk, who runs the bird conservation program at the Willistown Conservation Trust, which is a partner to the grant.

And as more towers go up, everyone benefits.

“When we put up towers, all other researchers benefit whose birds go by our towers,” Kiziuk said.

The Willistown Conservation Trust functions as a sustainable agriculture and wildlife protection area on approximately 14,000 acres outside Philadelphia. After multiple dairy farms went out of business in the area in the 1970s, the trust persuaded landowners to put their land in easements that would protect the open space from development and urban sprawl.

The land trust started banding birds a decade ago and then joined Motus as interest in their work exploded, she said. With data from the project, the land trust was able to show that the biodiversity of its land was increasing, and that sustainable agriculture and wildlife could coexist, she said.

Building out the network of antennas will only increase the number of questions the teams can ask.

“The opportunities are limitless basically because there’s so many species to look at,” Kiziuk said.

For Brinker, the most exciting results so far from Motus get their origins on an island off the coast of Nova Scotia, where a graduate student put nanotags on approximately 30 Ipswich sparrows from a population of approximately 6,000. Before Motus, the student would have been lucky to get a single second hit. She got a dozen, Brinker said.

There are a greater number of transmission towers in the Motus network on the coast than there are in the interior of the states. Expanding the network to other key habitats such as the Appalachian ridge line could bring forth other unexpected insights like these, he said.

“If we build it, I can ask some pretty sophisticated questions,” Brinker said.

Known to some as the Allegheny Alligator, this freshwater species is more slime than bite.

The article which is a good one Samantha mentioned insects but no description of a species. The organization should tag the insects coming into Maryland killing off our trees and install a attraction device along with the tag and lure them into one set point then destroy them by any means possible even using napalm. After all the tree forest set point will be badly damaged so who cares [smile]