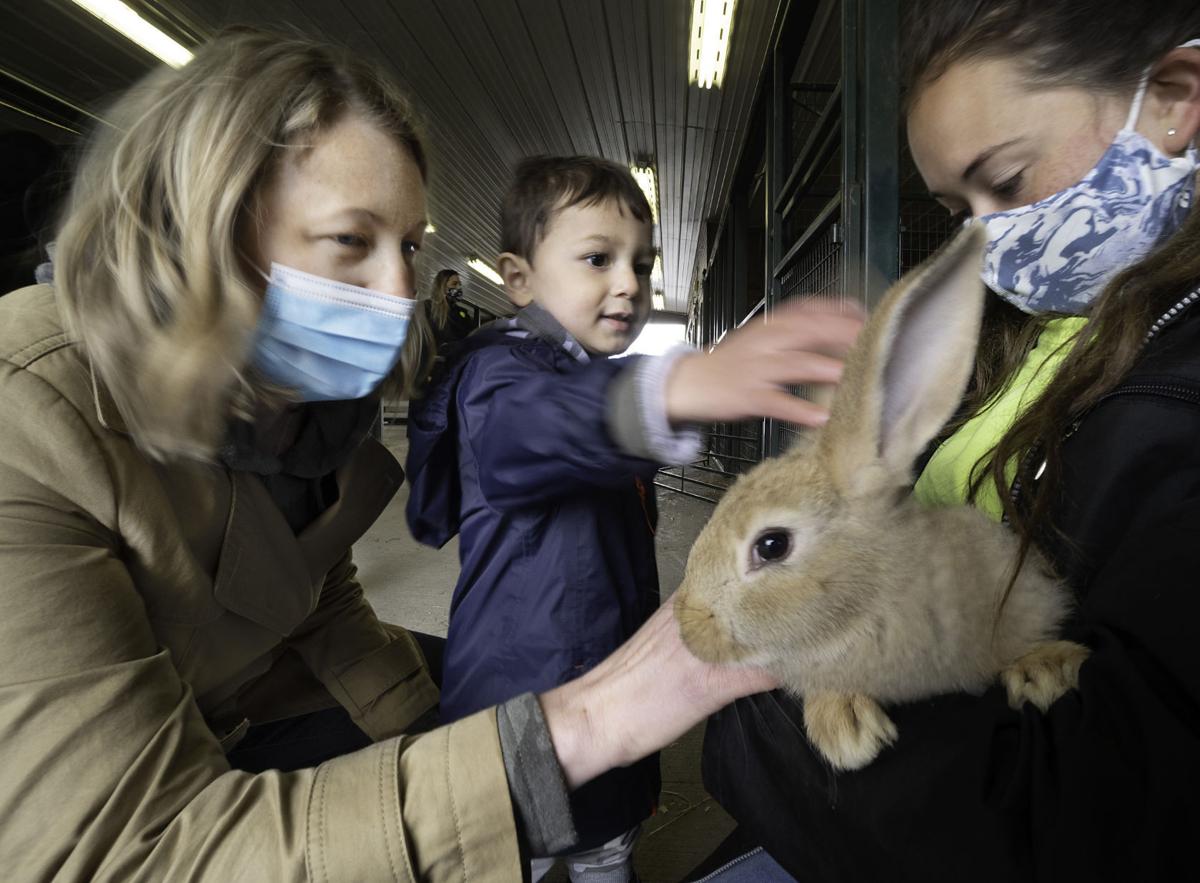 Emily Solomon of Germantown and her son, Connor, 2, pet a young Flemish Giant rabbit being held by Anya Fernandez Foss during the special Mother's Day event at the Green Meadows Petting Farm near Urbana Sunday afternoon. 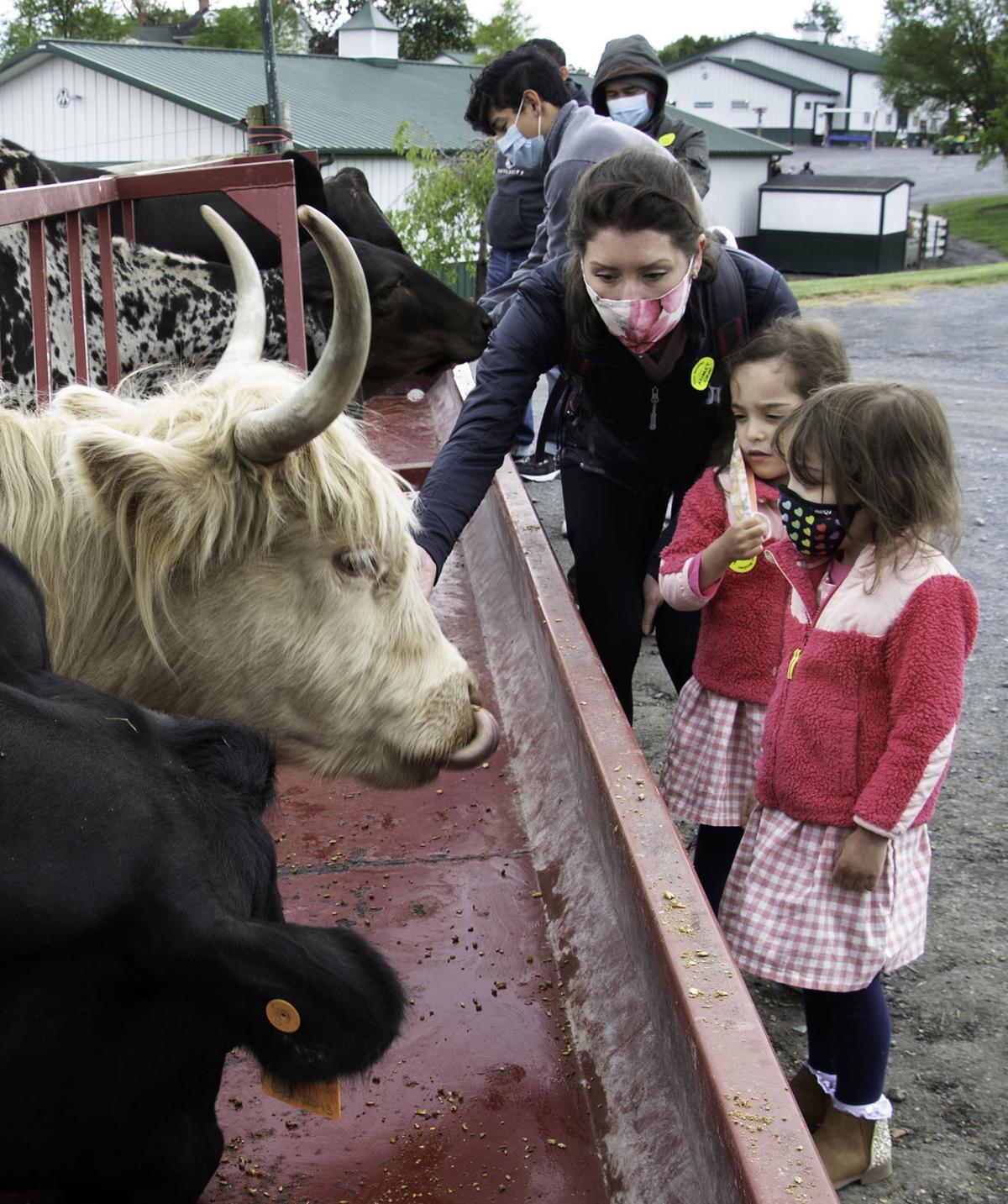 Mia Bautista of Potomac and her 4-year-old twin daughters Isabel, left, and Amelia get up close to a Highland cow during the special Mother’s Day event at the Green Meadows Petting Farm near Urbana Sunday afternoon.

Emily Solomon of Germantown and her son, Connor, 2, pet a young Flemish Giant rabbit being held by Anya Fernandez Foss during the special Mother's Day event at the Green Meadows Petting Farm near Urbana Sunday afternoon.

Mia Bautista of Potomac and her 4-year-old twin daughters Isabel, left, and Amelia get up close to a Highland cow during the special Mother’s Day event at the Green Meadows Petting Farm near Urbana Sunday afternoon.

Mothers of humans and animals alike were the stars of the Green Meadows Petting Farm Sunday as scores of visitors came out to celebrate all things maternal.

Donning matching outfits with pink fuzzy jackets, 4-year-old identical twins Isabel and Amelia Bautista carefully reached out to touch cattle eating from a trough on a cloudy Mother's Day afternoon in Ijamsville. A cow named Sage — who is expecting a baby of her own soon — tilted her horns from side to side.

The twins' mother, Mia Bautista, said they came from Potomac to do something fun and COVID-19 safe outside.

"We love the farm. We really wanted to see the pig race," Mia Bautista said.

Isabel said they started their day by giving mom some new clothes and a heart bracelet. Amelia was especially excited to see the cows.

Mothers got in free Sunday with one paid admission.

"Through all of COVID, the moms have been extremely happy we're open," farm manager Debbie Fultz said. "The moms really do get such joy out of seeing their kids have such joy."

They weren't able to offer their Mother's Day special last year due to being closed from the pandemic, according to Fultz, so she was glad to see families there Sunday. The petting farm has been at its Fingerboard Road location since 2005, but originated in Wisconsin in 1964.

Despite the relatively chilly weather, families came out in droves to interact with animals of all sizes, climb around the firetruck-themed playground and hop on hay rides.

Flemish Giant rabbits caught the eye of 2-year-old Connor Solomon, even though he already has rabbits at home. A few baby rabbits, born in March but already the size of a football, huddled together in the corner of a barn stall, neighbors to a pair of mini donkeys.

Connor and his mother Emily, of Germantown, eagerly stroked one of the larger young rabbits available for petting. Connor's father, Kith, said they planned to get lunch in Mount Airy afterward. They came with Connor's aunt and grandparents, too.

"It's nice to do something together with the family instead of being stuck indoors," Emily Solomon said.

Across the way in their own enclosure, a mother rabbit guarded her newborns as they dozed inside a nest of fur. A llama, alpaca, mini horses, guinea pigs and a 2,300-pound Brahma steer named Tank drew the attention of visitors to the barn.

Outside, chickens roamed not far from a mother pig and her piglets. Children rolled around in a corn crib silo. An unfazed mule and horse stood idly by as onlookers admired them from a distance.

Green Meadows Petting Farm frequently partners with local businesses for various events, including first Friday's Barnyard, Band & Booze. The next is held June 4. More information can be found at greenmeadowsevents.com.

The Dimocrats want to replace the term "mother" with " birthing people", so next year we will celebrate "Birthing People's Day".

All mothers didn’t give birth.

Such a lovely article, such a nasty comment, give it a rest

Never. Too many people just give it a rest while the woke mob runs right over them. Maybe you would be happier in San Francisco where they have invented a whole bunch of euphemisms for everybody.