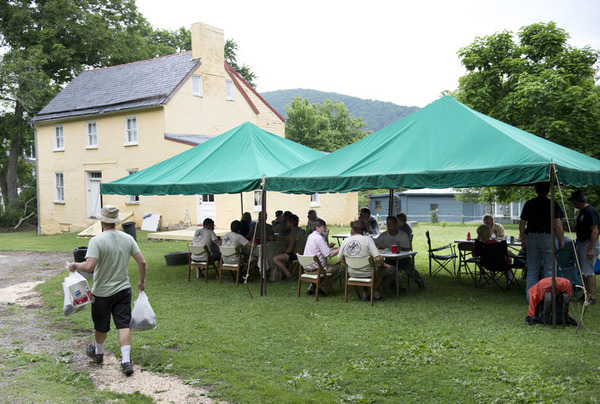 War veterans hiking the Appalachian Trail as part of the Warrior Hike's "Walk off the War" program's, converged in Harpers Ferry Tuesday at Virginia Lodge No. 1 for a cookout honoring them. Staff photo by Graham Cullen 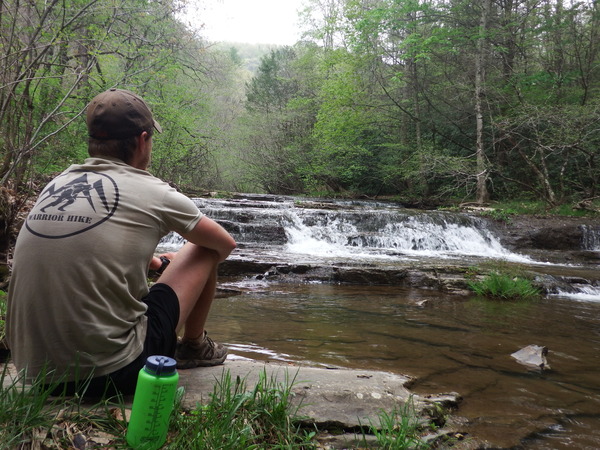 One of the Warrior Hikers relaxes by a river while hiking the Appalachian Trail this year. Fourteen military veterans are hiking the trail as a way to decompress from the stress of battle and military life. Warrior Hike's Walk Off the War program started in 2012. 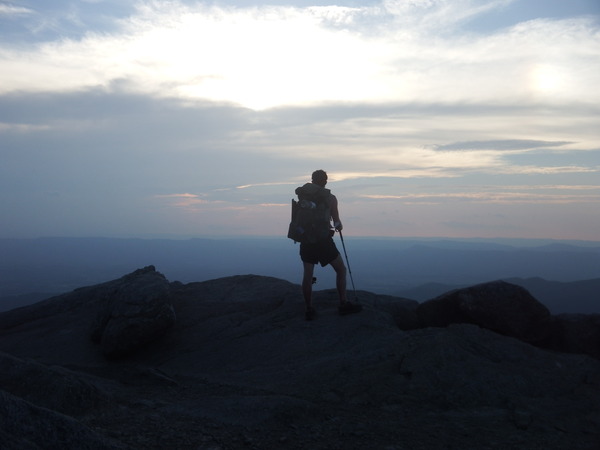 Courtesy photo This year's Warrior Hike brought a group of 14 military veterans to backpack the Appalachian Trail. The group started hiking the 2,185-mile trail in the spring in Georgia, and expects to complete the hike in Maine in the fall.

War veterans hiking the Appalachian Trail as part of the Warrior Hike's "Walk off the War" program's, converged in Harpers Ferry Tuesday at Virginia Lodge No. 1 for a cookout honoring them. Staff photo by Graham Cullen

One of the Warrior Hikers relaxes by a river while hiking the Appalachian Trail this year. Fourteen military veterans are hiking the trail as a way to decompress from the stress of battle and military life. Warrior Hike's Walk Off the War program started in 2012.

Courtesy photo This year's Warrior Hike brought a group of 14 military veterans to backpack the Appalachian Trail. The group started hiking the 2,185-mile trail in the spring in Georgia, and expects to complete the hike in Maine in the fall.

I was hiking on the Appalachian Trail as I have countless times, but this was a dream. I was barefoot; it was night. I couldn’t find my footing, so I reached for my backpack to get a flashlight but found instead a rifle. This vivid dream was inspired by a group of military veterans I met earlier that day hiking the 2,185-mile Appalachian Trail.

Sean Gobin, founder of the Warrior Hike "Walk Off The War" program, was in Harper’s Ferry Tuesday evening to join veteran hikers for a picnic hosted by the Odd Fellows Virginia No. 1 lodge, and the Appalachian Trail Conservancy. Gobin described personal trials that led to the creation of the program.

“The Department of Defense gave me a 20-minute PowerPoint presentation about how to deal with transition,” Gobin said. This after spending most of his adult life in the military and deploying twice to Iraq and once to Afghanistan.

Without time to decompress, military personnel find themselves tossed directly back into society, seeking, but not always finding, effective transitions. This may lead to isolation, post-traumatic stress disorder, or PTSD, and depression. Gobin discovered a path, quite literally, to heal from the emotional wounds of war and successfully reconnect with society.

“In 2012 a buddy and I decided to hike the (Appalachian) trail. That hike was a fundraiser for wounded vets,” Gobin said of the journey which begins at the summit of Springer Mountain in Georgia and extends to Mount Katahdin in Maine. “It was a profound experience. I found more value in the hike itself and as a vet I realized the trail could be a great transition experience.”

Gobin realized only near the end of his hike that the first person to complete the trail was also a veteran. In 1948, Earl Shaffer, a World War II veteran, told a friend he was going to hike the entire trail to “walk off the war."

“Not everyone wants to go to a therapist and divulge their story,” Gobin said. On March 17, 14 veterans started their journey on the AT, as the trail is known, in the third annual Warrior Hike. The hikers get support from Warrior Hike, but manage the hike on their own.

The program is loose. There are no therapeutic benchmarks a hiker must reach. “It (healing) happens when it happens,” Gobin said. But there is a well-organized support network. Sponsors outfit hikers with needed gear. The program also has a long list of partners and supporting communities.

Once a week the group descend from the trail into a nearby town. Community members, who want to thank American soldiers for their service, host a dinner.

At the Harpers Ferry dinner, the air was thick and muggy, with a looming storm. Stitch, aka Cecil Thayer, wearing a pair of Xero shoes from one of the sponsors, explained his trail name. “It was the first day, before we even got started,” Stich said. He held up his hand to show a healed scar. “I slit my hand all the way to the bone; thank God for Super Glue,” he laughed.

When I asked if he had gone to an emergency room he said no. “I was a combat lifesaver so I’ve had my experience sewing stuff up.” He said that, along with the magical powers of Super Glue and the moonshine he acquired in Kentucky just before the hike served as an antiseptic and an effective pain killer.

"There are good and bad days on the trail, just like anything else. Although not so good days seem to coincide with not so good weather,” he said. “But overall it's great getting away from normal, everyday, crazy life. My responsibilities out here are to eat, sleep and put one foot in front of the other. That leaves me with a lot of time to just think.”

Before he became Stitch, Cecil spent four years in the Marines. He was deployed to Iraq in 2005 and returned home in ’06, then served four years in the National Guard. Reentry into “normal” life for Cecil was difficult.

“The biggest problem is that when you’re in military combat overseas you don’t have the luxury of dealing with things on the spot. Say a friend dies or you get news that someone back home has died, no matter what happens, you still have a job to do.” Having to show up and suit up without experiencing the grieving process results in bottled up emotions. “Eventually you have to deal with those things. This program gives you six months to sort your mind out. You can yell, scream or holler out there in the woods and no one thinks you’re crazy.”

To decompress so dramatically in society would be met with judgment and fear, he added. “A lot of us guys come back and isolate…no one understands.”

Isolation and social anxiety became the norm for “Bigfoot” aka Todd Rogers. His feet were indeed enormous. “The companies who sponsor the program had shoes only up to size 13. I had to order my own size 14 shoes.”

After being deployed to Fallujah in ’04 and returning in ’05, Todd immersed himself in school. “I sat alone in the back of the classroom. I went to the store to buy food, then home. That was pretty much my life,” he said. No longer hiding in the back of the classroom Bigfoot sat right in the center of the evening’s festivities boldly sharing his story and clearly enjoying the camaraderie and liberation from years of suffering from isolation.

“I’m from New York. When I left we had 22 inches of snow.” Bigfoot looked forward to the hike assuming he'd arrive in Georgia in mid-March with balmy weather. “It was 30 degrees and 8 (degrees) at night!” He laughed. But he adjusted quickly to trail life.

“On the trail, everyone has the same concerns, life or death concerns. Everyone is nice too — that’s helped me regain some perspective, Humanity can be good. You tend to lose faith in people when you see what happens in a war.”

Bigfoot also identified his disconnect. “My self-reliance has come back.” The day-to-day hiking helped restore his emotional health. His pleasures are now found in simplicity; settling in for the night, seeing a sunset, reading a good book in his tent and relaxing for a well-deserved sleep. “It’s a really happy place,” he said with a smile.

Both Stitch and Bigfoot have found camaraderie with their fellow hikers, not only within their small group but also others they meet on the trail. “Being on the trail forces you to come out of your shell.” Stitch said. “We interact together, but I interact with a host of other people on the trail, Priests, police, teachers…they’re all out here and there’s something I can take away from everyone.”

There is also a balance of alone time. A hiker can spend a whole week walking alone and others on the trail respect and understand that decision.

Stitch and Bigfoot plan to stay connected with the program as supporters after re-entering society.

“Life is all about change.” Stitch replied. “The point of the trail is to deal with issues rather than hide from them. I’d like to think I will be able to go back and be a better individual a better father.” Stitch said that his first offer from the Veterans Administration for dealing with his issues was a bottle of pills. “That’s just a BandAid.”

Bigfoot said there is no power capable of removing the profound sense of confidence and well-being he has recaptured from his journey thus far on the trail. After the trail, Bigfoot plans to approach life as “the driver of his own bus and no longer just a passenger.”

To learn more, go to: