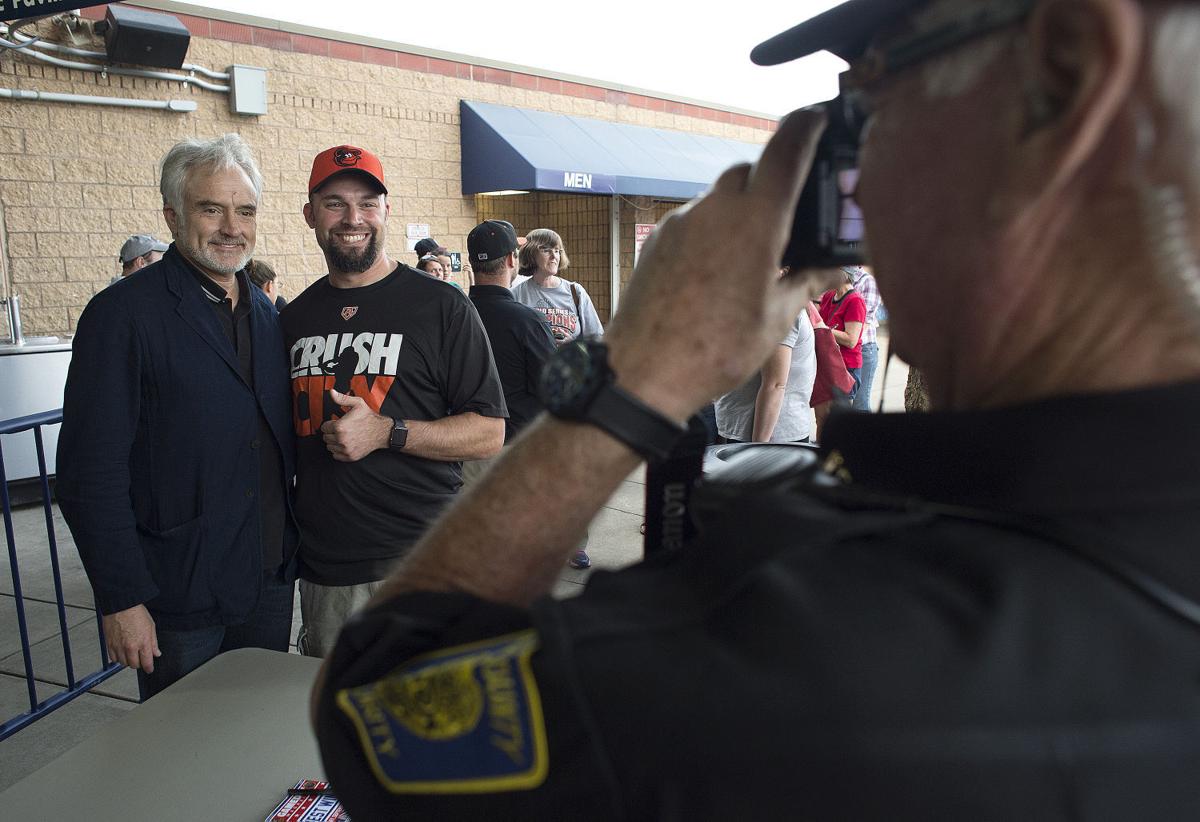 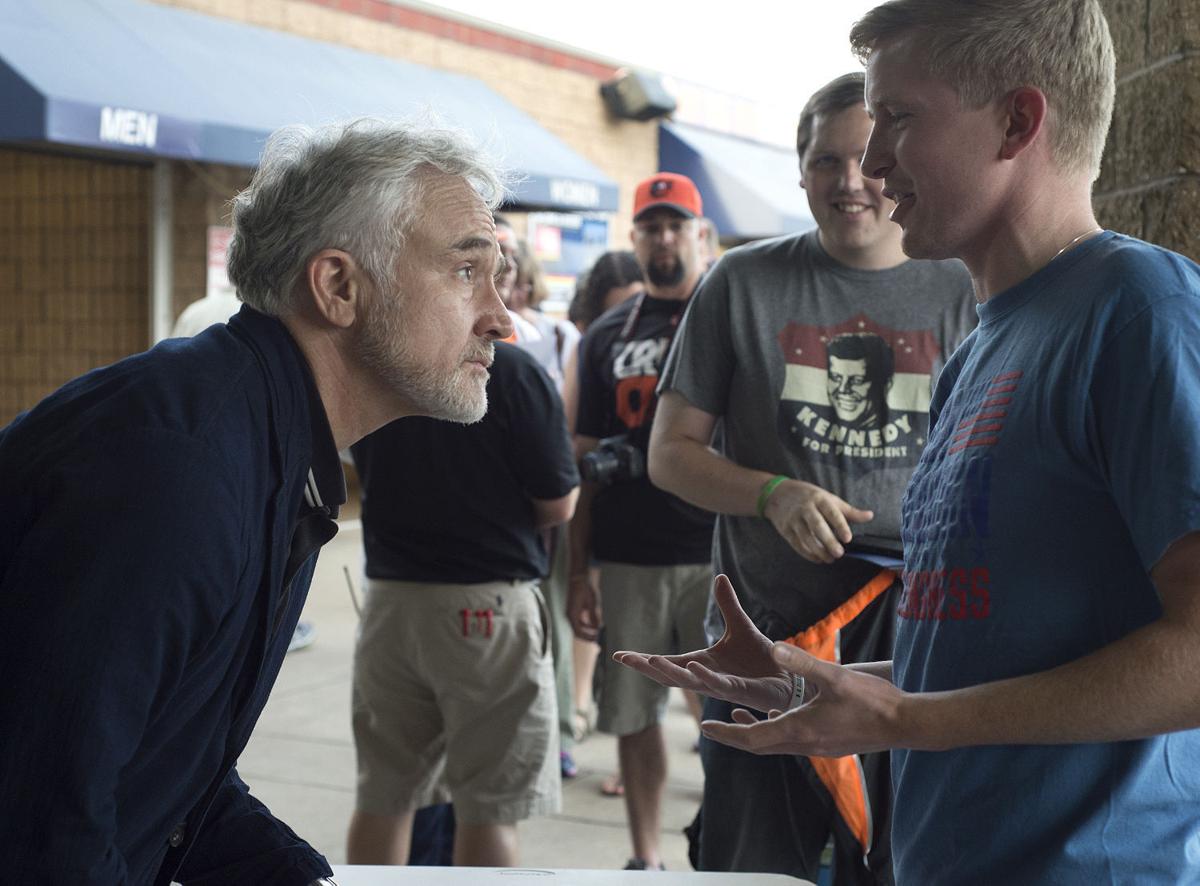 Actor Bradley Whitford, left, listens to a question from Collin Wojciechowski, of Pasadena, right, before signing an autograph for Wojciechowski on Friday at the Keys game.

Actor Bradley Whitford, left, listens to a question from Collin Wojciechowski, of Pasadena, right, before signing an autograph for Wojciechowski on Friday at the Keys game.

It was a gorgeous night at Nymeo Field on Friday, as the Frederick Keys prepared to take on the Wilmington Blue Rocks. The temperature had sunk to a balmy 73 degrees after a week of hot August weather. The sun set softly between the clouds.

As fans streamed into the stadium, no one seemed happier to be at the game than Bradley Whitford, the two–time Emmy award-winning actor, who was visiting the park because of his role as Josh Lyman on NBC’s long-running political drama, “The West Wing.”

“I love minor league baseball, but I don’t get to see it very often,” Whitford said, coming off the field after throwing the opening pitch of the game.

Officially, Whitford was at the game for “West Wing Night,” a themed event the Keys scheduled this year in light of the upcoming presidential election.

But he said he also has other ties to Frederick. According to Whitford, he starred in his first few plays with an actor from Minnesota named Pearce Bunting, the uncle of Geoff Arnold, who calls games for the Keys. When Arnold called and asked Whitford to appear at Friday’s game, Whitford was happy to oblige.

In addition to throwing the opening pitch of the game, Whitford signed autographs for fans from 6 to 8 p.m. At the start of the game, the line to see the actor snaked nearly the length of the field. While some Keys fans were drawn to the line for the chance to see a famous person — any famous person — Whitford also attracted a number of devoted “West Wing” fans who came chiefly to meet him.

“I drove all the way from D.C. just for him,” said Claire Handscombe, 38, who waited in line with two friends.

Like some other fans, Handscombe was wearing a “Sam Seaborn for President” T-shirt, a reference to another “West Wing” character who ran for Congress.

Unlike other fans, Handscombe was holding a copy of “Walk With Us: How The West Wing Changed Our Lives,” a book on the show that she compiled and edited. It features essays and testimonials from other devotees who tout the impact “The West Wing” had on their lives.

Handscombe herself said the show inspired her to move from London to Washington, D.C., and pursue a master’s degree in creative writing from American University, all based on the strength of Aaron Sorkin’s scripts for the show.

“‘The West Wing’ showed me a side of America that I hadn’t known existed before,” Handscombe said.

Some fans came out simply because they had fond memories of watching “The West Wing” when it was on the air. Bernie Stallknecht, a bubbly 78-year-old from Westminster, said she and her son used to watch the show, then call each other to compare notes.

Others enjoyed the idealism of the show, which seemed to contrast with the cold reality of D.C. politics.

“It showed a White House that we could have had,” said Pol Heiney, 38, a fan from Hagerstown.

Keeping with the political theme of the night, Keyote, the Keys’ mascot, also launched his own presidential bid during the game. The first 1,000 fans through the gates received a “Vote for Keyote” button to mark the start of his campaign.

But what would Josh Lyman think of the 2016 presidential race?

“I think he would be in shock,” Whitford said. “If you wrote it, no one would believe it.”

It's been a long time since West Wing. If he dyed his hair you could hardly tell.

You are used to seeing him in stage makeup for the cameras. He is 57 and in his "natural" state. He looks okay to me.