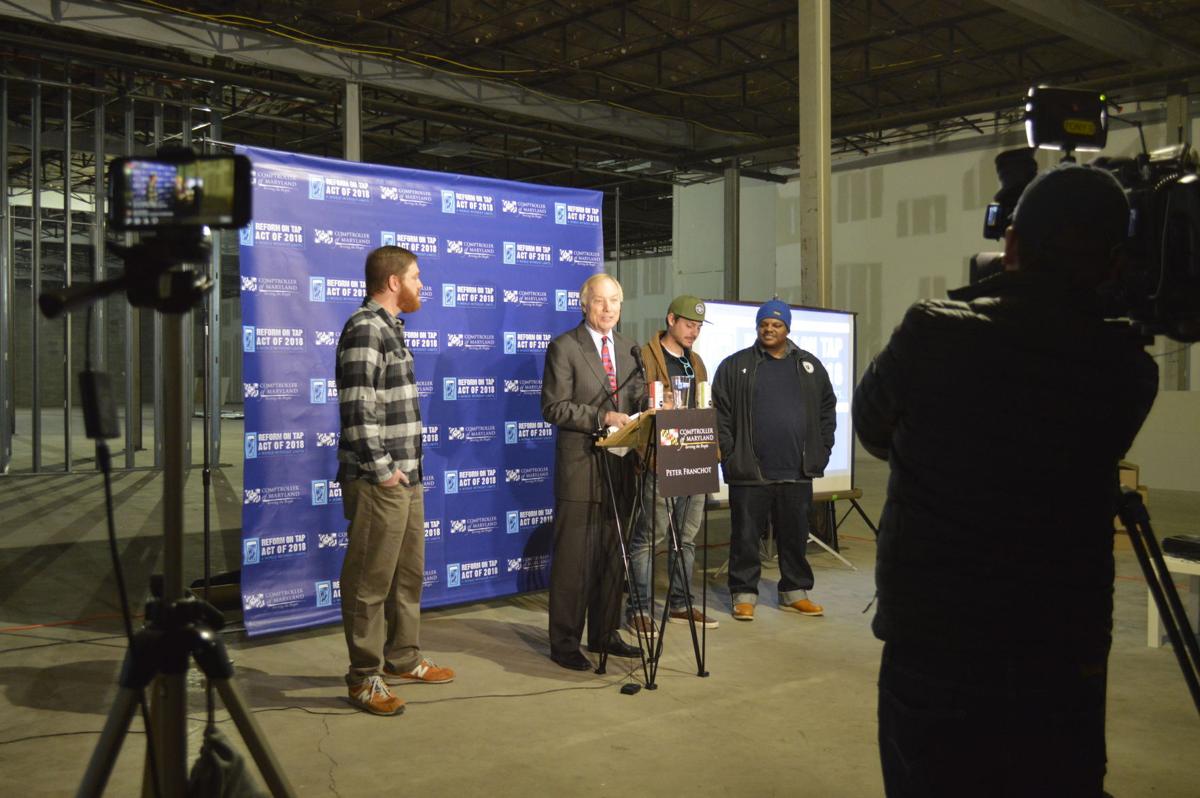 Comptroller Peter Franchot (D) speaks about the 12-point Reform on Tap Act of 2018 that he plans to introduce in the next General Assembly session. Franchot held a news conference at the under-construction Union Collective, a former Sears distribution center in Baltimore that will feature Union Craft Brewing's expanded brewery and other small businesses. 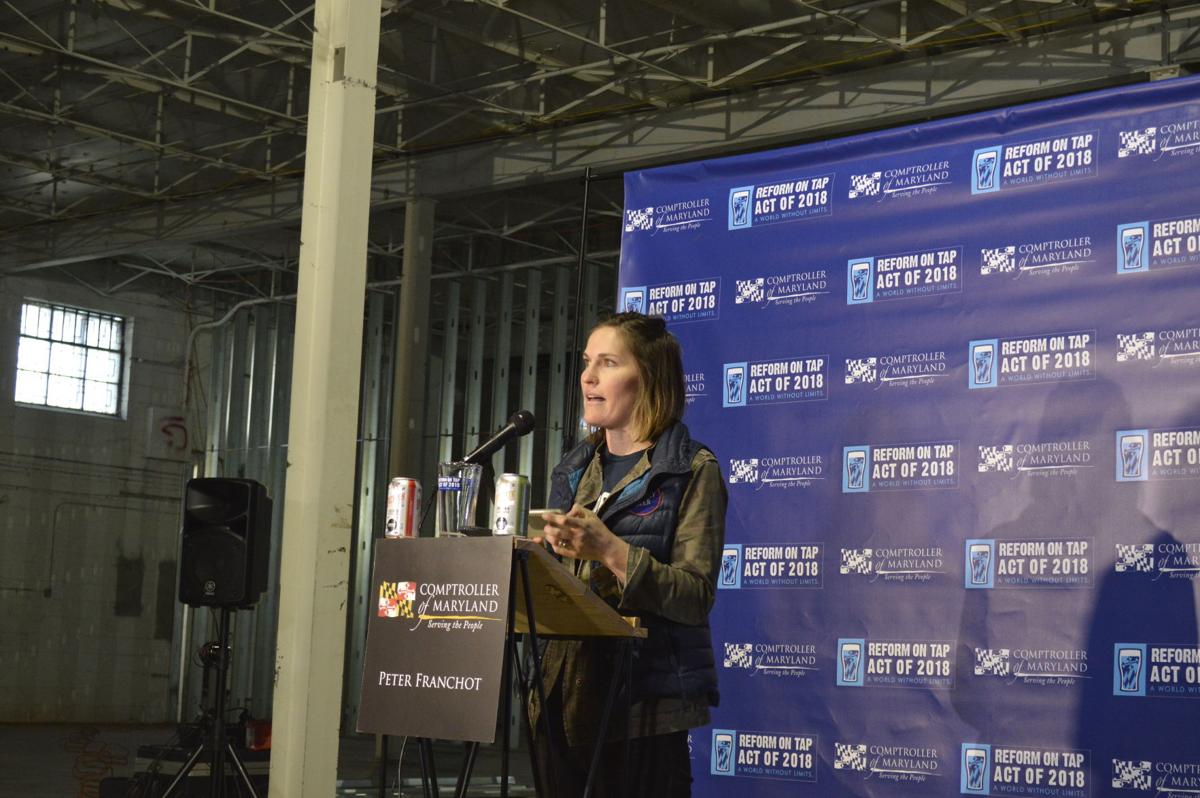 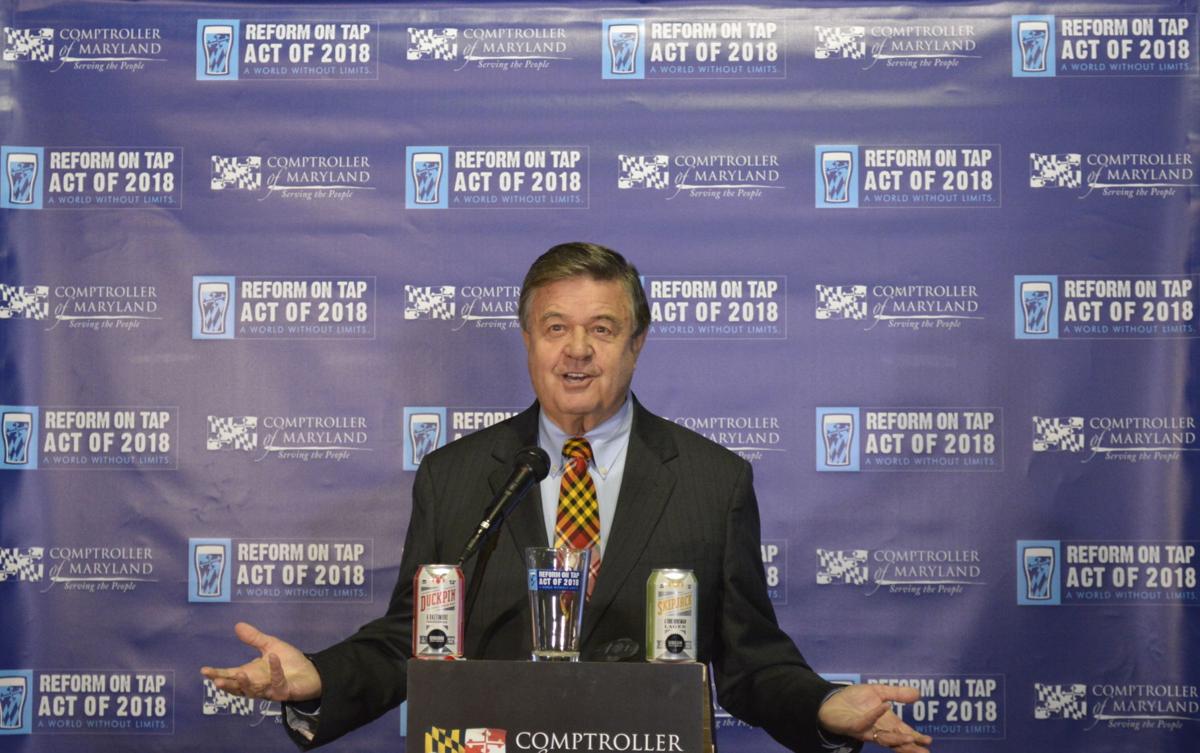 Comptroller Peter Franchot (D) speaks about the 12-point Reform on Tap Act of 2018 that he plans to introduce in the next General Assembly session. Franchot held a news conference at the under-construction Union Collective, a former Sears distribution center in Baltimore that will feature Union Craft Brewing's expanded brewery and other small businesses.

If Maryland’s debate over brewery regulations had happened a year earlier, Frederick’s Attaboy Beer would be one state to the north or one state to the south, owner Carly Ogden said Monday.

“The target is moving too much to invest our life savings here,” said Ogden, who, with other craft brewery owners, has opposed Maryland manufacturing limits that they say artificially cap their future growth.

Comptroller Peter Franchot (D) said Monday he will introduce a bill with a “12-pack” of craft brewery reforms in the 2018 General Assembly session.

The bill is named for a 40-member task force Franchot established shortly after the 2017 General Assembly session to review the state’s liquor laws. Brewery regulations came to a head last year when lawmakers sought to increase brewery taproom sales and loosen other restrictions in an effort to allow Guinness’ parent company, Diageo Beer Co. USA, to open a large brewery taproom in Baltimore County.

While the bill passed last year increased the annual barrel limit for brewery taprooms — then capped at 500 barrels — to 3,000, it also required brewers that sell more than 2,000 barrels in their taprooms to buy the additional 1,000 barrels from a wholesaler at a markup.

Opponents said the bill sets an uneven playing field in the industry and unnecessarily restricts the future growth of brewery taprooms.

Randy Marriner, a Howard County restauranteur and owner of Manor Hill, a farm brewery, said Maryland’s reputation in the craft brewing industry is not good and needs to change.

Effects on an industry

Ogden said she became active in the debate over brewery regulations last year, after lawmakers’ attempts to expand existing law highlighted other flaws in the state’s regulations.

“Frederick is a great town for small businesses. It’s a great beer community,” said Ogden, who doesn’t want to see the industry stifled.

There are 37 active Class 5 brewery licenses in the state, including eight in Frederick County. The county is also home to two of the state’s 29 microbreweries — Barley & Hops and Brewer’s Alley — and four of the state’s 10 farm breweries are in Adamstown and Mount Airy.

A report from the Maryland Board of Revenue Estimates — completed at the request of Franchot’s task force — concluded that Maryland’s craft brewing industry had an overall economic impact of $637.6 million in 2016 and supported or created 6,541 jobs, including those in restaurants.

The report also concluded that Maryland is a net importer of craft beer. While consuming an estimated 275,000 barrels of craft beer per year, breweries in the state produce only 247,000 barrels.

Local lawmakers in Frederick have expressed general support for reforms to support breweries.

County Executive Jan Gardner (D) included a position statement in support of the local industry in her 2018 legislative priorities package.

“Executive Gardner supports legislation that will provide a level playing field for brewery startups and large operations. The County Executive supports the need for both adequate on-premises production and sales facilities, as well as consumer access to the Maryland beers they want to buy,” the position statement states.

The topic was discussed at length during Gardner’s meeting with the General Assembly delegation at Winchester Hall last week.

Delegate Carol Krimm (D-District 3A) advocated with Delegate Karen Lewis Young (D-District 3A) for a unified delegation position on any reform bills introduced next year.

“It has to be on our radar. And we have to be meeting about this. From the beginning. Because this is an important industry here,” Krimm said. “…We have to meet on it. And We have to have a position. We have to be at the table.”

Sen. Michael Hough (R-District 4) said the delegation has supported the modernization of county-level liquor laws over the past few years, but more work is needed at the state level.

“I think time is in the favor of the breweries. Because these are popular. This is a great industry. People love them,” Hough said. “And so, over time, I think the special interest people that are holding this stuff up will lose.”

Finding unanimous support among the state’s breweries could prove difficult.

At the county delegation meeting last week, Young said he’s met with several breweries and heard varying levels of support for a whole spectrum of reforms.

“I’d sit there with eight of them and every one of them would have different opinions,” Young said. “The breweries themselves weren’t consistent with what they wanted.”

Kevin Atticks, of the Brewers Association of Maryland, said Monday that the proposed legislation will be discussed at upcoming meetings, but moving forward in the general direction laid out by Franchot would be good for the industry.

“Just looking at that list of the 12-pack of reforms, it will unleash the potential of Maryland beer,” Atticks said after Monday’s news conference. “That’s the whole point: There’s an industry here that other states have cultivated. And when cultivated, it leads to thousands upon thousands of high-paying jobs and direct and indirect benefits through employment, taxes and community redevelopment.”

On Monday, brewery supporters said there’s no need for tension among the different sectors.

“If you look at other states that have cultivated the industry, it’s at no one’s harm. It’s not as though other industries suffer when the craft beer industry thrives,” Atticks said. “It’s the opposite. All of the affiliated, associated, industries thrive.”

Young, who is chairman of the Senate subcommittee that addresses issues related to alcoholic beverages, said he maintains hope that brewery-friendly legislation will pass this upcoming session.

“I think they’ve got something to rally around,” Young said.

I think they're passing a law to benefit local businesses and job creators, who shockingly, donate locally to campaigns.

Whatever it takes to collect more taxes and wastesful spending in Maryland.

Not hard to figure this out, the state wants more TAX MONEY.

I don't think that it would generate more tax money by forcing a distributor or restricting the amount a brewery can sell. Anything a brewery sells is taxed.

Let's just give corporations anything and everything they ask for, I'm sure it will end well.

Do you think farmers should be limited in how much they can sell at roadside stands and farmer's markets?

would you rather support a corporation that was founded, headquartered and creates jobs here or just let InBev and Molson-Coors ship product here and let us ship profit back to them?