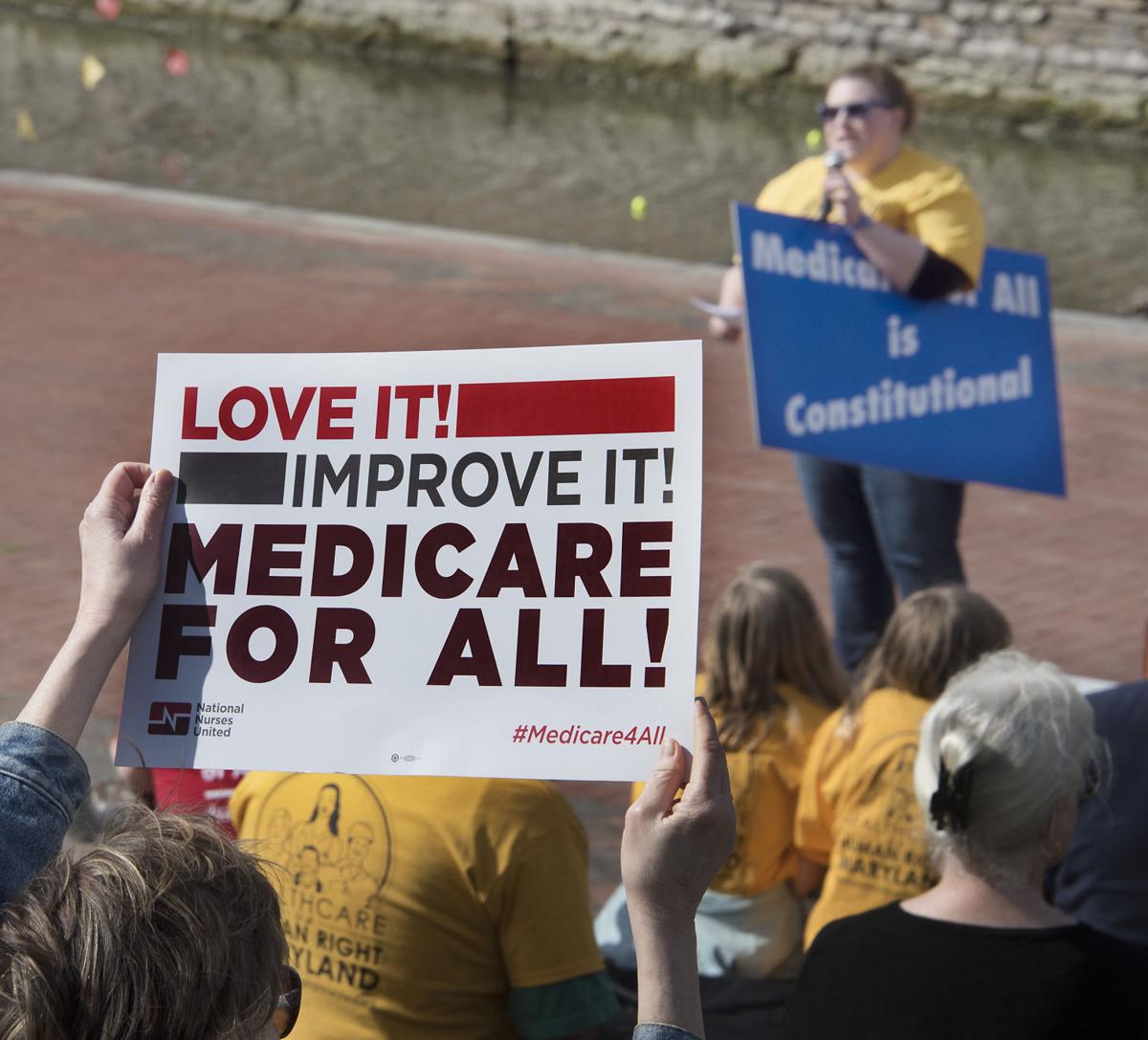 A rally for healthcare for all was held at the Carroll Creek amphitheater Saturday afternoon. Speaking in the background is Beth Landry, chairwoman of Frederick County Progressives. 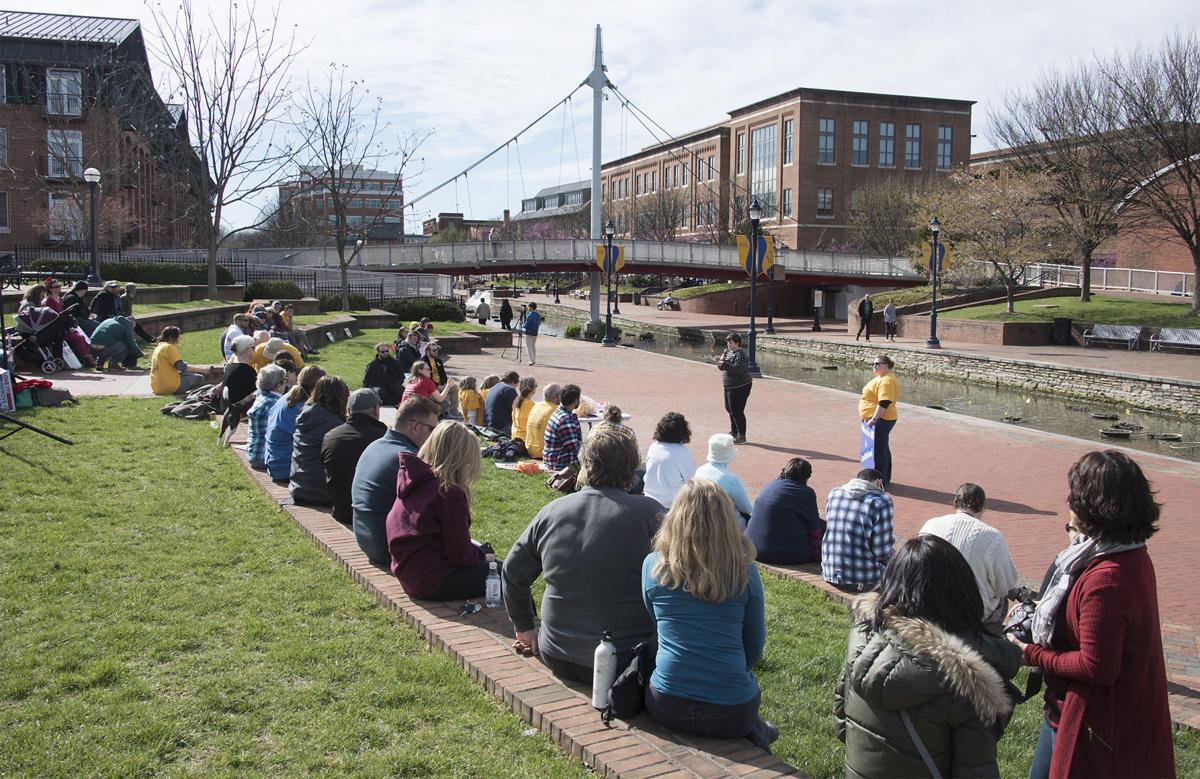 The Frederick chapters of Progressive Maryland and Healthcare held a rally for health care for all at the Carroll Creek amphitheater Saturday afternoon.

A rally for healthcare for all was held at the Carroll Creek amphitheater Saturday afternoon. Speaking in the background is Beth Landry, chairwoman of Frederick County Progressives.

The Frederick chapters of Progressive Maryland and Healthcare held a rally for health care for all at the Carroll Creek amphitheater Saturday afternoon.

A trip to a hospital emergency room is inevitable for most people at some point in their lives.

But the visit is seldom memorable as long as the patient gets the care needed and there are no complications.

That was not the case for Sasha Czeh, who recalled how she attempted to avoid a trip to the emergency room by duct-taping the severed part of her toe to the rest of her foot. Czeh, who was 10 at the time, didn’t actually believe her homemade remedy was a long-term solution, she said.

What she did know, gathered from “whispered conversations that I wasn’t supposed to hear,” was that her family had no health insurance, and treatment for her mom’s breast cancer was already creating financial strain.

This was the first time Czeh felt forced to choose between finances and health. And though she later received the professional treatment needed to repair her severed toe, she would continue to find herself making sacrifices because of the costly health treatments for her family.

First it was her mom. Now it’s her 8-year-old son, who was born with fetal alcohol syndrome as a result of his birth mother’s substance abuse and addiction.

Czeh recounted the uphill battle that she and her husband have fought since taking guardianship of the boy when he was 27 months old. Fighting for his treatment, and paying the skyrocketing bills, has reinforced her belief that the country’s health care system is broken.

Czeh, a city resident, was among about 60 people who gathered Saturday in downtown Frederick to demonstrate support for health care reform. Chants of “health care is a human right,” and “our fight is their fight” echoed down Market Street as the group marched from Baker Park to Carroll Creek Linear Park, where they gathered for a rally.

Speakers at the event, including Czeh, shared stories of how their own medical challenges, or those of family and friends, have forced them to choose between health and wealth.

Czeh recounted never-ending phone calls with her insurance company, a slew of surgeries for her son and paying out of pocket for medications not covered by their insurance. She quit her job as a public school teacher because her son’s condition requires that he be home-schooled.

James Van Kuilenburg, a 17-year-old transgender student at Gov. Thomas Johnson High School, spoke of the trans community’s difficulties accessing medical coverage. Even when they do, many health providers lack basic understanding of how to treat them, he said.

“While I welcome the opportunity to serve the community ... these decisions shouldn’t be made under fear of financial ruin,” she told the crowd, who responded with cheers and applause.

Many held signs proclaiming “Medicare for All” and “We Support HR 676,” a reference to a bill filed in the U.S. House of Representatives. The legislation, sponsored by Rep. John Conyers Jr., a Michigan Democrat, proposes a single-payer, Medicare-style system.

The cost of insurance for all, as proposed in the bill, would be covered through a combination of existing government revenue sources, increased income and excise taxes proportional to people’s earnings, and taxes on stock and bond transactions.

With the recent defeat of the Republican health care plan still fresh in people’s minds, a movement to a single-payer system is gaining traction, advocates said.

“A lot of people got a reality check,” said Beth Landry, referring to the prospect of a Republican-backed replacement to the Affordable Care Act.

Landry, chairwoman of the Frederick County Progressives and a registered nurse, said she’s supported a single-payer system for years.

But the high-profile battle over repealing and replacing “Obamacare” helped make the issue a hot topic for others, too.

Dr. Margaret Flowers, a Maryland physician who in 2016 ran as a Green Party candidate for the U.S. Senate, also highlighted the urgency of pushing Conyers’ bill forward.

“Are we going to tolerate this any longer?” Flowers asked the crowd. “We are really at a moment where we have to say ‘now,’” Flowers said.

The event was one of what Landry estimated was about 60 rallies taking place nationwide Saturday in recognition of National Day of Action for Health Care. Local chapters of Progressive Maryland and Health Care Is a Human Right Maryland organized the event with the Frederick County Progressives.

FYI, my son has one smiley face like scar for one surgery, which managed to correct multiple things at once, I think perhaps this was confused when I mentioned in my speech the amount of time we have spent over the years at various appointments, something every special needs mom could tell you about. I mentioned his surgery and the birth defects to my son's kidneys/urinary tract to emphasize that FASDs are a medical condition with a life expectancy of 34 years old according to a recent study. My son's diagnosis is Alcohol Related Nuerodevelopmental disorder, which is part of the Fetal Alcohol Spectrum Disorders. This is slightly different from FAS because children with FAS have changes to their facial features, though since children all across the spectrum can have the birth defects and cognitive challenges, it is not an important distinction when determining the services and support a child with an FASD should receive.

Also, while I could see my bone and a piece of my toe was hanging by a sliver of skin, I never did end up at the doctor and as I said yesterday, through "large amounts of peroxide and sheer dumb luck" I have a full set of toes. Not that I'm advocating using duct tape instead of medical care. I don't even have a scar after all the calluses I built up running long distances, but I probably shouldn't even have a whole toe, so go to the doctor if you need to, please!

Also, if you think medical care shouldn't be covered for everyone, then consider what your tax dollars cover for social services, prisons, SS disability, and death benefits for one family impacted by addiction, and you'll find you are already paying for it, just only after a lot of people have been hurt. Also, we spend more per citizen on healthcare than countries that have single payer systems but certainly don't rank first in the care provided. We could actually save money by implementing healthcare that isn't based on paying several times more for the same things than other countries because it's a for profit system.

This is most likely the same group that cheered when the debacle known as Obamacare was made law. Of course, as we are painfully aware of Obamacare was right from the start a huge lie. The very same people who were the cheerleaders for Obamacare are reaping what was sown.. Their new mantra is that it is a "constitutional right" to have health insurance. Reviewing my copy of the constitution, that page must of been left out. Now they demand a "one payer" system (which we all know was Emperor Obama's real goal). I'm sorry, but thankfully for those of who pay taxes, the old socialist Bernie wasn't elected this time around. It won't happen under this administration. Let the Democrats figure it out, they own Obamacare 100%.

And what does the other party own - 7 years of talk without a solution. Even their own party can't produce a coherent plan. As long as we continue to elect pure ideologues, we can't hope for any type of compromise solution to the health care issues. The ACA has flawed sections but neither party is willing to address those and "fix it" because they can't actually compromise and work for the majority of Americans. And yes, a one payer system could work.

Livingwell, read the preamble. It does include the phrase "promote the general welfare" so yes, it does provide a vehicle to guarantee
this human right to adequate health care for everyone in our country. We certainly can afford it. Take a few minutes and re read this article. See if you can actually internalize the issues presented instead of ranting aboutup Obama, Sanders and folks who are committed enough to a cause to go out and exercise free speech.