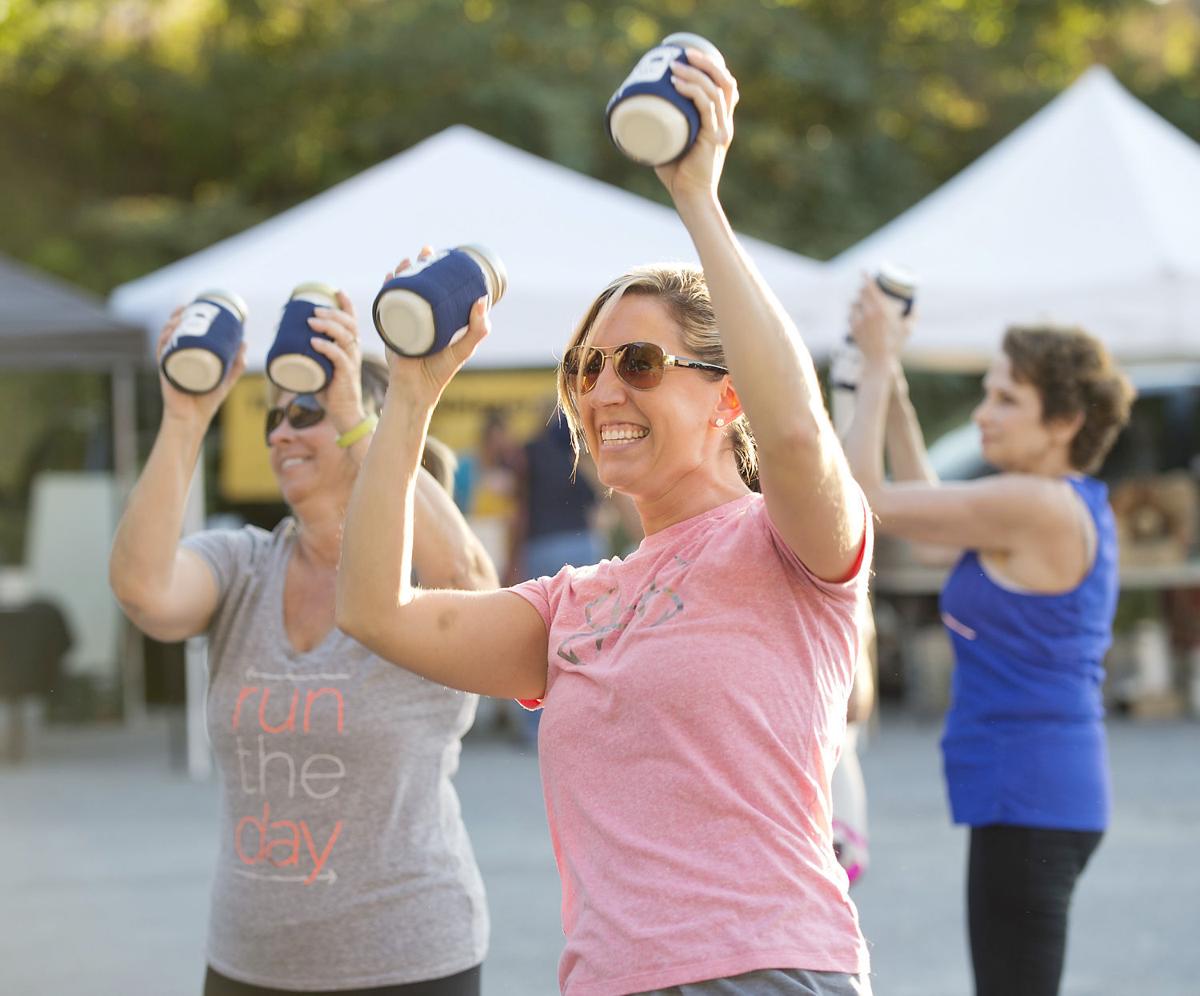 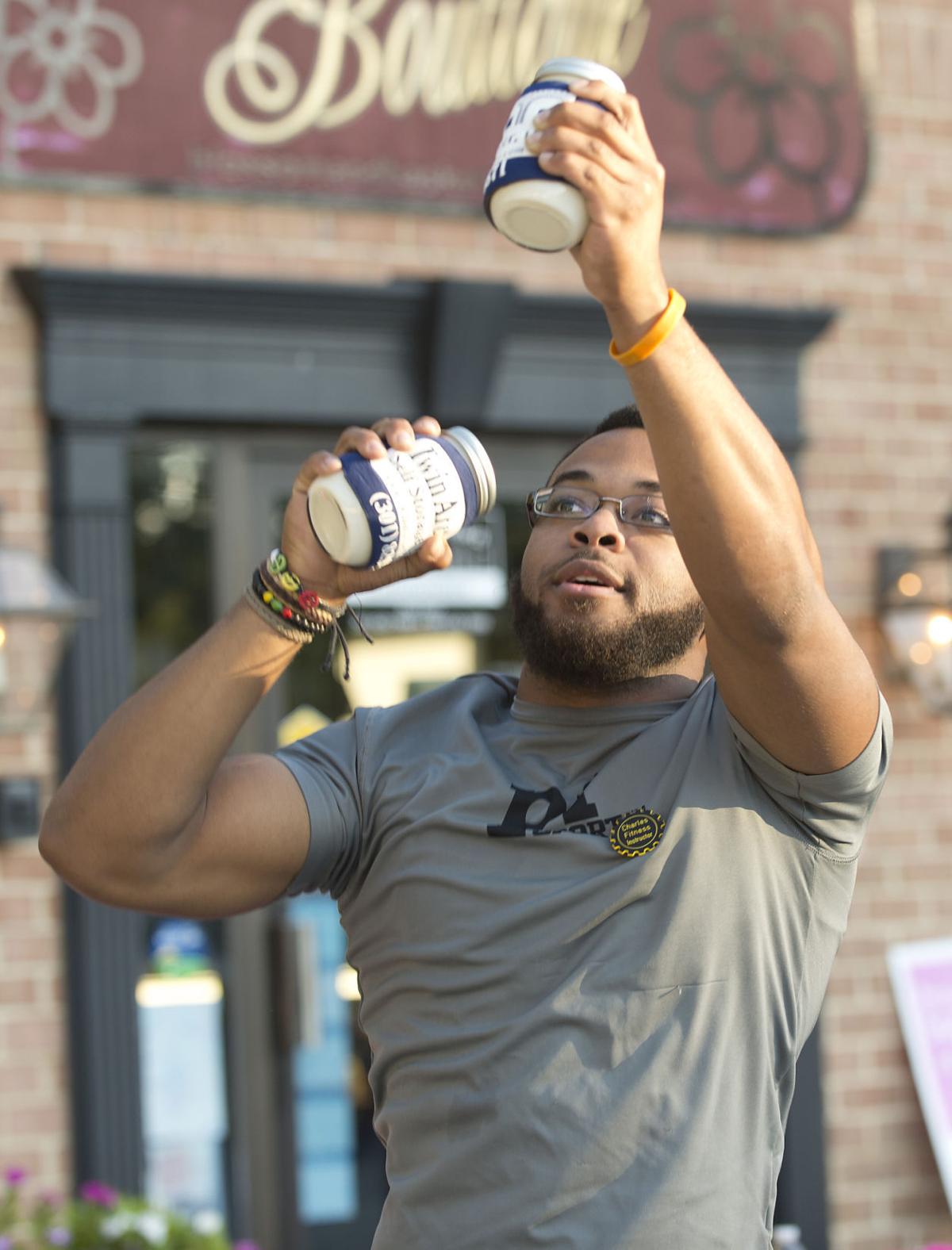 The churning was led by fitness expert Charles Gilbert and three energetic assistants.

Feel the Churn participants gather in front of the Blossoms & Baskets flower shop in downtown Mount Airy. They were asked to donate a minimum of $25 to register. In return, each was presented with a T-shirt and two pint-size mason jars filled with heavy whipping cream. 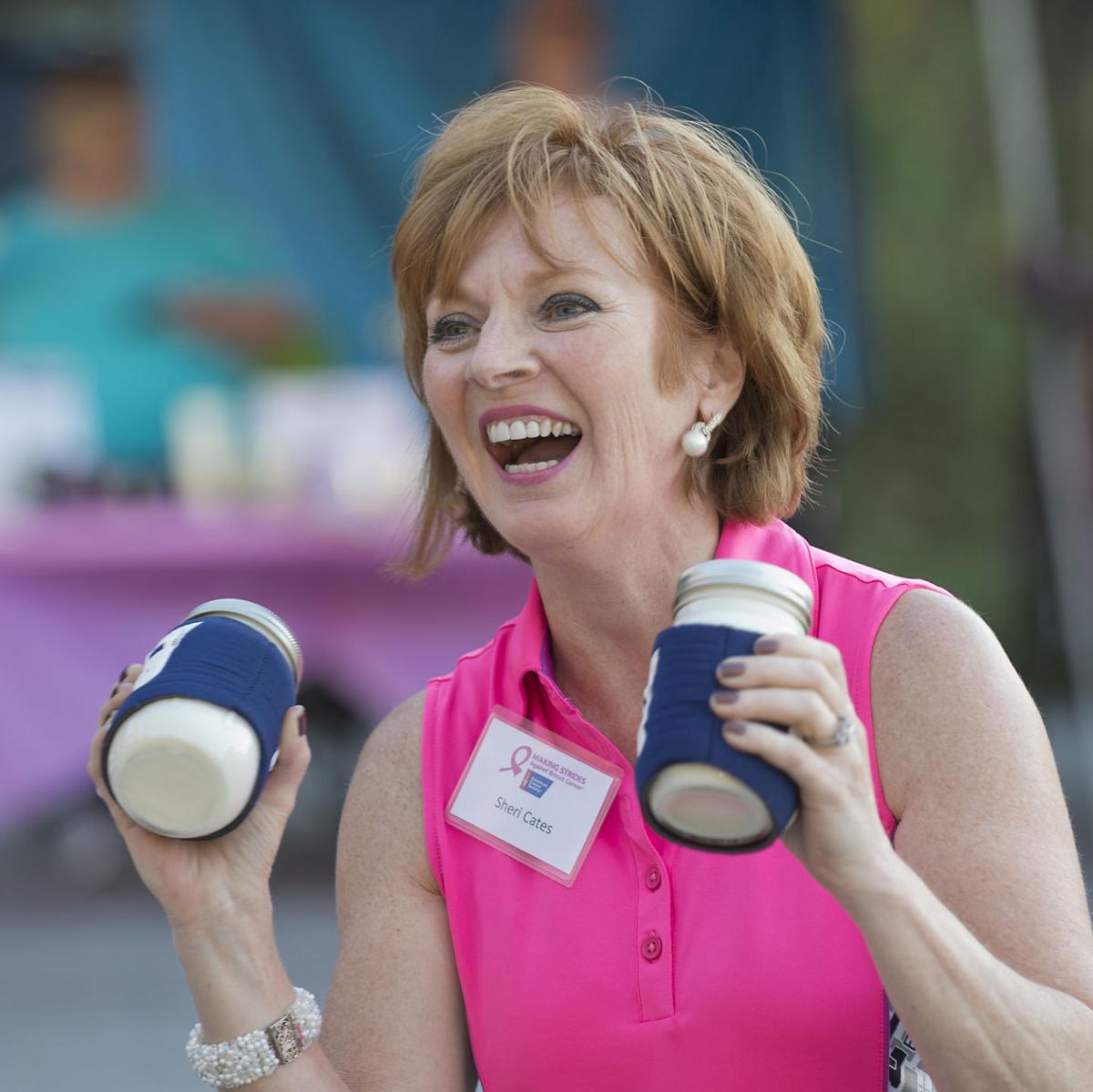 Sheri Cates, president of Women in Motion and the genesis behind Mount Airy’s butter aerobics.

The churning was led by fitness expert Charles Gilbert and three energetic assistants.

Feel the Churn participants gather in front of the Blossoms & Baskets flower shop in downtown Mount Airy. They were asked to donate a minimum of $25 to register. In return, each was presented with a T-shirt and two pint-size mason jars filled with heavy whipping cream.

Sheri Cates, president of Women in Motion and the genesis behind Mount Airy’s butter aerobics.

MOUNT AIRY — Jamie Misko wondered if it would be odd. Men and women huffing and puffing about a parking lot in spandex and shorts, all the while shaking jars of cream into butter. Deciding to give the unusual fundraiser a go in June, she had so much fun she came back for a second turn this month.

Misko was among 15 people who showed up Sept. 16 for the second “Feel the Churn” Butter Aerobics event organized by Mount Airy Women in Motion, a local networking group for female business owners. Both events benefit the American Cancer Society as part of fundraising efforts for the Making Strides of Mount Airy walk on Oct. 18. Making Strides awareness walks raise money to fund breast cancer research and assist people battling the disease.

Feel the Churn participants gathered in front of the Blossoms & Baskets flower shop in downtown Mount Airy about 6 p.m. They were asked to donate a minimum of $25 to register. In return, each was presented with a T-shirt and two pint-size mason jars filled with heavy whipping cream. “You are going to be moooving,” joked Sheri Cates, president of women in motion and the genesis behind Mount Airy’s butter aerobics.

After a brief welcome, someone started a CD player and thumping dance music boomed across the lot. Led by fitness expert Charles Gilbert and three energetic assistants, the group began moving. They danced. They jumped. They did their best uptown funk to the voice of Bruno Mars and various singers for roughly 30 minutes straight. The entire time, they waved their mason jars up and down, back and forth to the beat.

“This is really a work-out. I’m sweating,” laughed Darlene Lindner. “I keep saying two more minutes.” Next to her, Barb Gardner agreed. “Paula Deen never made butter like this,” she said, raising her arm into the air.

Hoisting the jars was a lot more exhausting than it looked. But the pay-off was worth the exertion, everyone agreed. “It’s the best butter we’ve ever had in our entire lives,” said Alice Settle-Raskin, a Women in Motion member who runs Alice’s Agrimaryland. She specializes in marketing local food producers and agriculture-related activities. “Lovely, local cows” provided the cream to make the event possible, she noted.

The cream was donated by Dairy Maid Dairy, a Frederick-based processor of milk, juices and fruit drinks since 1946. After being freshly-shaken, the butter was spread on bread baked that morning by “The Dough Whisperer” Kimberly Bradshaw who sells baked goods, including gluten-free treats, at the Mt. Airy Farmer’s Market. The butter aerobics event was held on a Wednesday to coincide with the farmer’s market, which stayed open late to support the fundraising event. Bradshaw and her friend, Debra Ramirez, were among many of the vendors shaking their own mason jars as they helped customers.

Across the lot at the Women in Motion table, volunteers had stacked recipes using different kinds of butter. Several curious onlookers and supporters mingled nearby, sampling the newly-churned butter and chatting about the fundraiser.

The idea apparently originated at Temple University but quickly became popular across the United States, according to Settle-Raskin. Cates learned about it from a sister who lives in Manhattan and participated in an event held there. “I thought it was the weirdest thing I’d ever heard,” Cates said.

But the novelty of it appealed to her. And since four years ago, Women in Motion began sponsoring Making Strides of Mount Airy, the fundraiser seemed a good fit. Something fun and unique for people to do that emphasizes good health. And that also highlights top-quality local food producers.

“I tasted (the butter). The taste is unbelievable,” said Jennifer Mykytyn. Normally, she attends Zumba classes on Wednesday evenings but said she was happy to switch up her exercise routine for a good cause.

Through Feel the Churn and other activities, Women in Motion have raised more than $3,000.

All the money goes to the American Cancer Society, said Kristen Cecilio. A Women in Motion member, she supports the group’s work to benefit cancer research and aid people battling the disease. “At some point, someone I know will be affected,” she said.