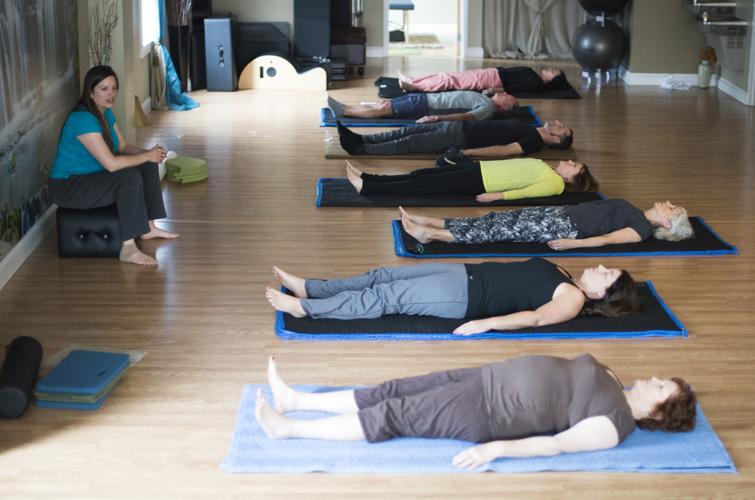 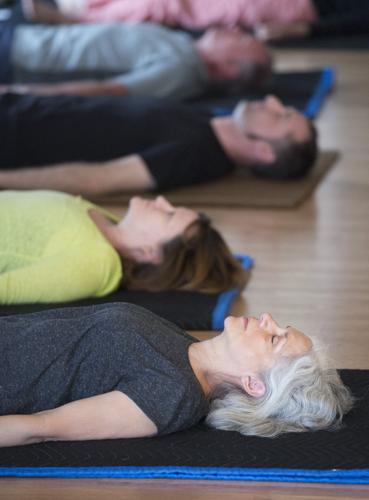 Dee Tarleton, bottom, and others take part in a free Feldenkrais pilates class recently at Pioma Pilates studio in Middletown.

Dee Tarleton, bottom, and others take part in a free Feldenkrais pilates class recently at Pioma Pilates studio in Middletown.

To Hannah Vo-Dinh, Feldenkrais is too much of a well kept secret, particularly in the United States.

The activity, which is meant to re-train a person’s brain about how to move, was promoted on May 9 when Middletown’s Pioma Pilates held a day of free Feldenkrais classes in order help build more of a following in the Frederick County area.

“It’s hard to describe,” Vo-Dinh, one of the day’s organizers and a Feldenkrais teacher, said. “It’s something you have to experience.”

Feldenkrais is awareness through movement, she said. The instructor gives verbal instructions but does not actually demonstrate. This is meant to recreate how an infant learns to move since it’s rare that someone would show an infant how to do something like roll over, Vo-Dinh said.

There are about 1,000 different Feldenkrais lessons and movements, including methods like reaching, coordinating the pelvis with other parts of the body, rolling, lifting and pulling.

Re-learning techniques like these are often meant to get people out of habits that might be causing them constant body aches and pains, Vo-Dinh said.

The activity starts with a “scan” of participants lying on their backs and noticing which body parts are lying flat and which ones are slightly lifted. This could indicate which body parts might be carrying tension.

A goal for Feldenkrais is for all body parts to be lying flat by the end of a session.

“In the course of an hour you may be releasing tension you’ve been carrying around for decades. It’s that dramatic,” Vo-Dinh, who owns the Frederick studio Mind Body Sense, said.

Though Feldenkrais is used for both athletic and artistic performance, Vo-Dinh said it’s different than the standard fitness activity in that it’s more about changing a mindset rather than controlling a person’s body. Vo-Dinh said it could help anyone from a person recovering from a stroke, to a tennis player who needs to swing without putting tension in their shoulder, or even a teenager who spends too much time in front of a computer.

Vo-Dinh herself started Feldenkrais to help with a diagnosis of psoriatic arthritis.

“We go with what you’re already doing and we support you in that,” she said. “And then we begin the provide you with new options.”

Vo-Dinh was one of four teachers giving hour-long lessons at the free Feldenkrais event. All the teachers also had backgrounds in techniques like yoga, pilates and martial arts, though Vo-Dinh stressed that Feldenkrais is a lot less intense.

“We’re more gentle than even the gentlest yoga,” she said.

Middletown resident Anita Link went to the Feldenkrais lessons with the intent of learning more about it and possibly bringing it to her church. She was also hoping it would help with her pain from a compressed disk in her back, for which she has tried to avoid daily medication.

She was expecting Feldenkrais to be more similar to yoga, and she said it was in that they both focus on body alignment. The difference, to Link, was that Feldenkrais is more about brain connection.

She was particularily struck by a movement where she had to lie on her back with her knees up, and slowly rotate her arms, legs, head and eyes.

“It takes some real concentration to keep it going smoothly,” Link said.

Jayme Marshall of Burkittsville also noticed that Feldenkrais was more slow and intentional than yoga.

“I thought it would be more like stretching or something,” Marshall said. “You really have to focus your mind on it.”

Like Link, Marshall said she would try Feldenkrais again, particularily to gain more insight into her own bad habits.

“It’s not how you would normally move through the world,” she said.

Laura Dukes is a free-lance writer and a forme r FNP staff reporter.

The studio is located at 7 W. Main St., Middletown.

As far as a goal being to get all body parts "flat," what if you have scoliosis and are never "flat"?

Excellent question. That was incorrectly stated in the article. There is no goal to be flat!

It's good that it was mentioned that this practice can be done in a chair or on a table; the latter preferably one that a person can get onto and off easily. A lot of people, if not most, who are in considerable pain and/or just not in shape, can get down on the floor (and get back up) as the pictures show as part of these classes.

Yes, and use of chairs is not limited to private sessions. Many group lessons are done in chairs, and instructions can be modified to accommodate anyone who needs to sit in a chair or wheelchair. Students are asked to do only that which is easy and comfortable. Eventually, many people discover that they are able to get down to and up from the floor. Dr. Feldenkrais said that the method would "make the impossible possible, the possible easy, and the easy elegant."