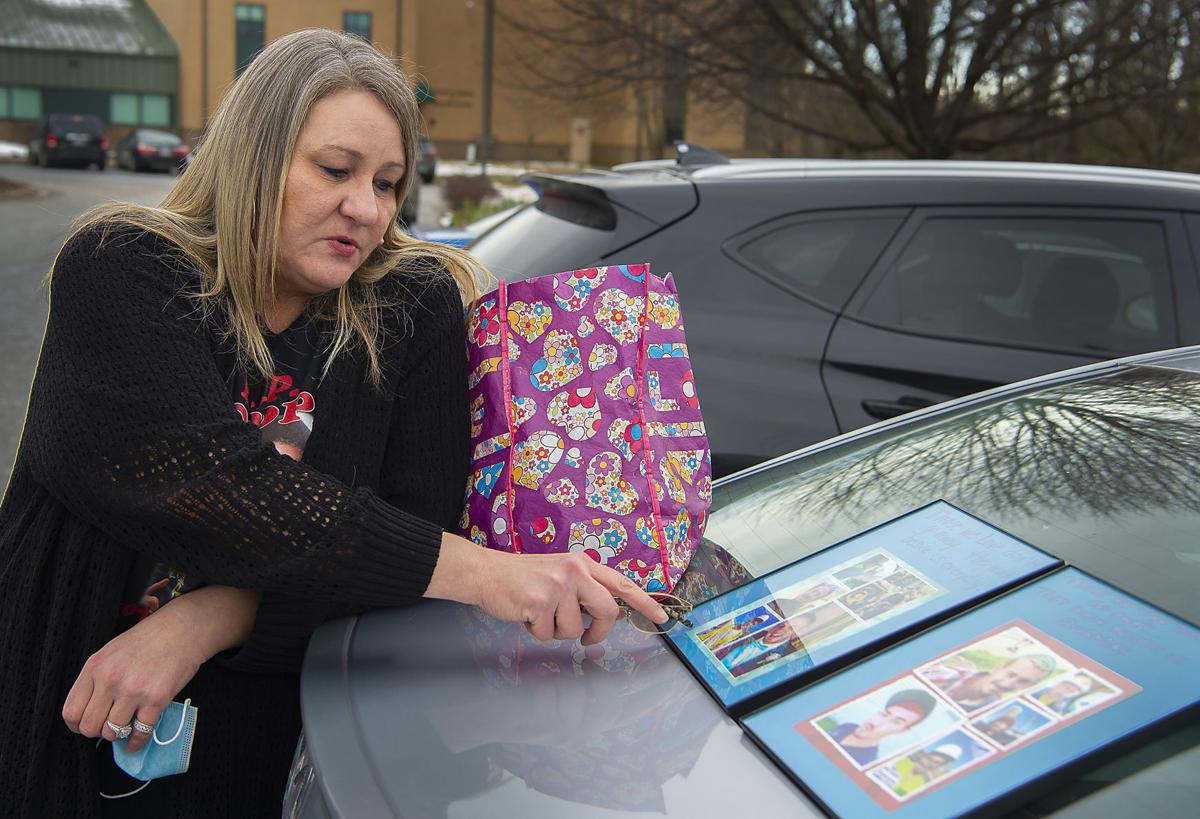 Tina Johnson, of Frederick, talks about losing her son Raymond “Coop” Cooper and her brother Tyler Rakich to overdoses within less than two months of each other in 2018. Rakich was 28 when he died, and Cooper was 27. She displays photo collages of both men. 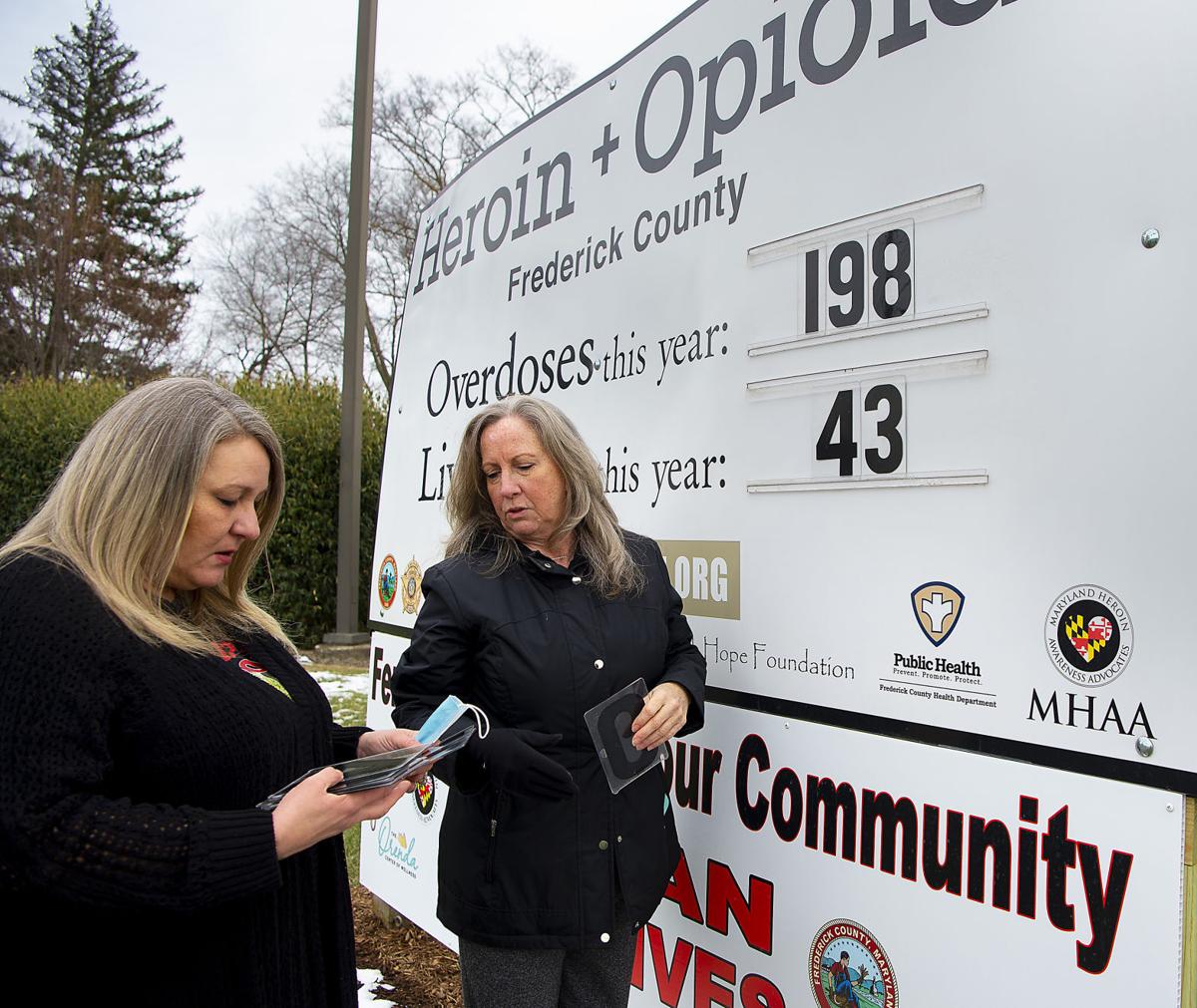 Tina Johnson, who lost her son and brother to overdoses in 2018, at left, and Carin Miller, president of Maryland Heroin Awareness Advocates, update the number of overdoses and deaths in 2021 on a large billboard on Md. 85 at Marcies Choice Lane. 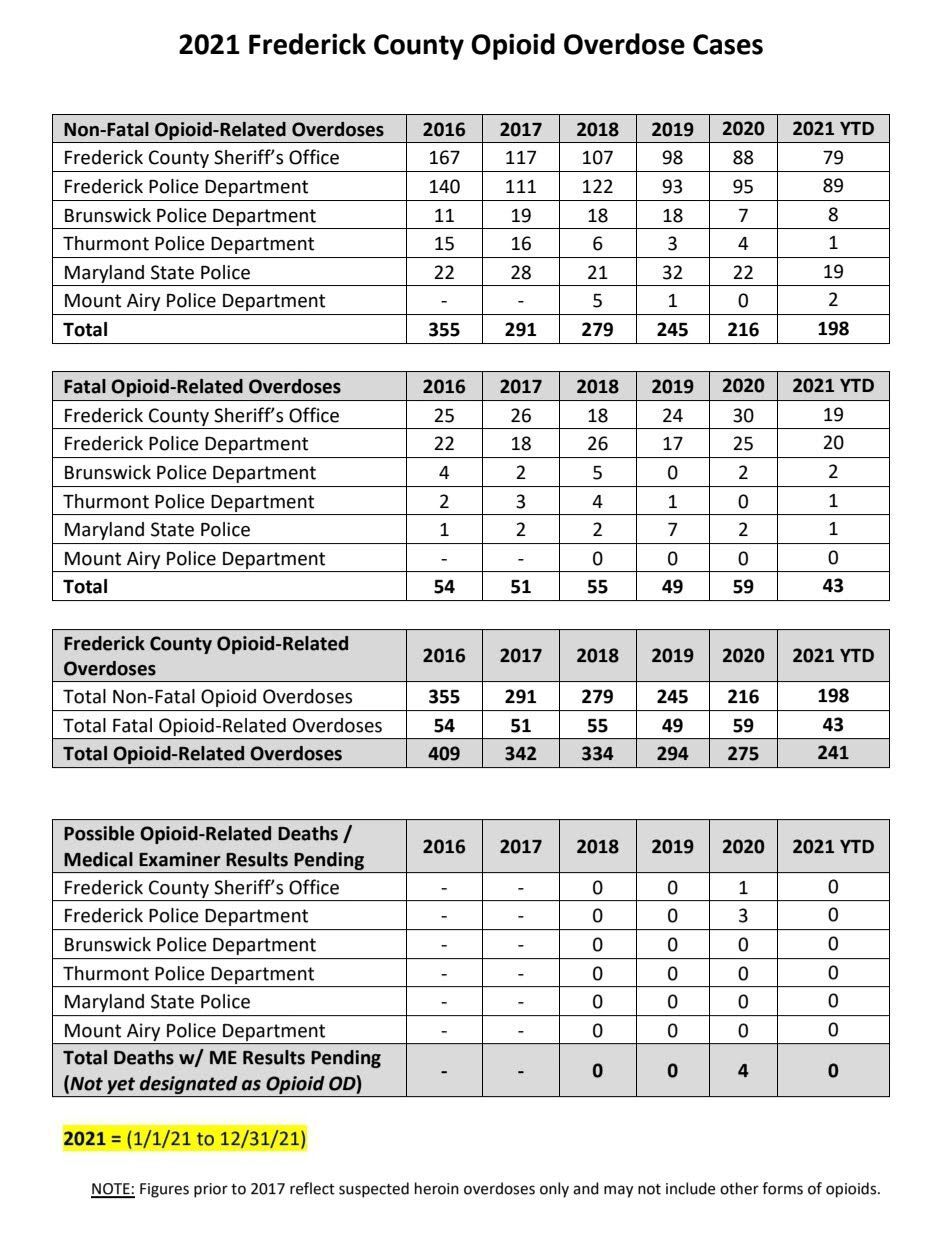 This table depicts the number of opioid-related overdoses recorded in Frederick County from 2016 through 2021.

Tina Johnson, of Frederick, talks about losing her son Raymond “Coop” Cooper and her brother Tyler Rakich to overdoses within less than two months of each other in 2018. Rakich was 28 when he died, and Cooper was 27. She displays photo collages of both men.

Tina Johnson, who lost her son and brother to overdoses in 2018, at left, and Carin Miller, president of Maryland Heroin Awareness Advocates, update the number of overdoses and deaths in 2021 on a large billboard on Md. 85 at Marcies Choice Lane.

Every month, Tina Johnson’s family changes the numbers on a billboard outside the Frederick County Adult Detention Center.

Those big, black numbers represent the number of overdoses, fatal and nonfatal, that occurred in Frederick County. In 2021, the county experienced 198 nonfatal overdoses plus 43 fatal, according to police data provided by Maryland Heroin Awareness Advocates (MHAA). That’s fewer than in years past, but for Johnson and other recovery awareness advocates, one is too many.

Johnson, of Frederick, lost her son Raymond “Coop” Cooper and her brother Tyler Rakich to overdoses within less than two months of each other in 2018. Rakich was 28 when he died, and Cooper was 27.

“They were extremely close,” she recalled, more like brothers than an uncle and nephew.

When Rakich died, Cooper felt more lost than before.

Johnson grieves still, but she doesn’t do it sitting down. She sponsors people in recovery and is the Frederick County representative for MHAA. She encourages people in need to reach out to her through the organization. Johnson has been in recovery herself, or as she puts it, a “productive member of society” for 15 years.

When she updates the overdose numbers, she does so in the shadow of the building where she was once an inmate.

Roughly 15-plus years ago when she was at the detention center, Johnson says she was lucky to get into an outpatient recovery program offered at the time. She remembers there being 12 slots for women, much fewer than what was available for the men.

“I just remember being like, ‘Thank God I was chosen,’” she said.

Now, Johnson has made it her mission to help others. She has a message for those who use drugs.

“One is too many, and a thousand is never enough,” she said, as in, one dose takes it too far, and one thousand doses could never be enough once you’re hooked.

It’s painful for Johnson to see the overdose numbers climb month after month, but when it came time for the update Wednesday, she had supporters by her side.

“We are here to help with compassion,” said Carin Miller, president of MHAA and peer recovery support specialist with the Maryland Center of Excellence on Problem Gambling.

Sean Nicholson, director of community and business relations for The Orenda Center of Wellness, also provided a helping hand. Orenda, an addiction treatment center, provided funding for a new banner on the sign.

An active advocate and local resident, Nicholson has come to know many in the Frederick County recovery community.

“A lot of my friends are in this number,” he said, staring at the billboard. “It’s getting harder and harder to absorb the loss.”

Though important for visibility, the sign does not capture every loss. Deaths related to drug use can also take form in sepsis or endocarditis, Miller acknowledged, not only overdoses. And when people cross county lines for hospital care and die elsewhere, their fatal overdose isn’t necessarily recorded in the same place they obtained the drugs, like with Johnson’s brother.

“We don’t have a perfect system,” Nicholson said. “It’s unfortunate that an overdose board has to be displayed on a major road for there to be an elevated conversation for the needs of people who struggle every day with multiple substances. ... We’ve lost so many, and that brings us to why we’re here today at the board.”

The sign that faces Md. 85 came to be in 2017. In the first quarter of that year, Frederick County experienced overdoses from heroin or an opioid, on average, every single day, according to Margaret Nusbaum, chief of staff for the county executive. Every week and a half, someone overdosed and died. A tranquilizer called carfentanil that is 10,000 times more potent than morphine and 5,000 times more potent than heroin reached Frederick, causing one of the first three deaths in the state from this drug, Nusbaum said. Advocates and members of the county executive’s Heroin Consortium called for increased awareness, and the overdose billboard was erected.

Nusbaum views the nonfatal overdose decline with “dubious optimism,” she wrote in a recent email. “Frederick County’s trends are going in the opposite direction of the national trend during the pandemic,” Nusbaum wrote.

Overdoses reached a new high nationwide during the pandemic. The Centers for Disease Control and Prevention estimated that 100,300 Americans died of drug overdoses from May 2020 to April 2021, the Associated Press reported.

“Contributing factors for the [Frederick County] decline in overdose and overdose deaths may be related to the extensive efforts to reach people in the community using partnerships in innovative ways,” Nusbaum said.

A short walk from the overdose sign is Mountain Manor at Marcies Choice, an addiction treatment center on the second floor of the Frederick County Work Release Center that opened its doors last year, Nusbaum noted. And in 2020, the fire and health departments launched a program that put peer recovery specialists and emergency medical service providers on the road together to respond to overdoses in a more holistic way.

Despite these and other advancements, the opioid epidemic continues, and so does the work of people like Miller, Johnson and Nicholson.

When Johnson lost her son and brother, people told her in the beginning it would be OK. The pain would go away.

“It just gets different,” she said.

She thinks of her brother as a child playing with Tonka toys, then growing up to learn the trade of construction. And even though he was the baby of the family, he was the protector.

Coop, meanwhile, wanted to be a mixed martial arts fighter and was known to do backflips. He was a positive thinker and never held a grudge.

Johnson looks at her grandson Calin, Coop’s child, and is reminded of her son.

Every time I drive past this sign it always makes me think. Not for the reason you may immediately think. Let me be clear I have no sympathy or compassion for those who represent a number on the sign. Because there are more options than I care to list here where they could have gone voluntarily to seek help with their addictions and or mental illness. Yes, I understand how addictions are, but it doesn’t excuse the fact that help is freely available without recourse for those with substance issues. I must ask how many of those that survive an overdose are charged with a possession crime. What requirements and or restrictions are made mandatory for them to follow after the overdose survival. Not to mention the possible emotional and mental impact of their family and friends for what they did. When I see this sign it makes me think of how the men and women who have a child pornography addiction have no place to go to seek help without the threat of possible mandatory reporting. Although there are no laws against legal age pornography it is like other addictions for many in that it slowly results into crossing a line, they seldom see coming into child pornography. Although I admit there is always a victim in child pornography, I want to be clear there is a separation between hands on and viewing images and video. Yes, both are illegal no matter how you look at it. Child pornography because of its easy access affects people of all ages from teenagers to senior citizens. In almost all cases the possession of child porn results in the sex offender registry registration for a minimum of 15 years. I have seen what restrictions are placed upon someone on this registry. It does not have different restrictions for those with a hand on or child pornography conviction. In my judgement if there were a mandatory registration for those providing and manufacturing drugs along with those who overdose the numbers on this sign would be far less. Maybe not zero but lives would be saved, and family and friends would not be traumatized because of someone’s behavior that could have been prevented if they also had to live with the same restrictions as those on the sex offender registry. I can’t help but think how much safer we would all be if we knew who in our neighborhoods have a drug conviction that involved selling, manufacturing, or using. Who is driving home thru your neighborhood while the kids are playing that have a DWI or DUI. It is a documented fact that those with a sex related conviction who have been thru a form of sex offender therapy are the lowest recidivism rate of most crimes. However, it is the belief that sex offenders are one of the highest which contributes to the public fear. My goal in writing this post is to ask if you know of someone on the sex offender registry ask them their story on how they got there, what therapy have they participated in and how are they doing now. My believe is that you will find many accept responsibility for their past and are a much better person today than they ever thought they could be. Accept them for who they are today, please. Who would you want living next door? Someone who has never touched a child but has seen child pornography or someone who needs, distributes, and sells drugs to anyone including students. Thank you, Tina, for shinning the lite for all to see.