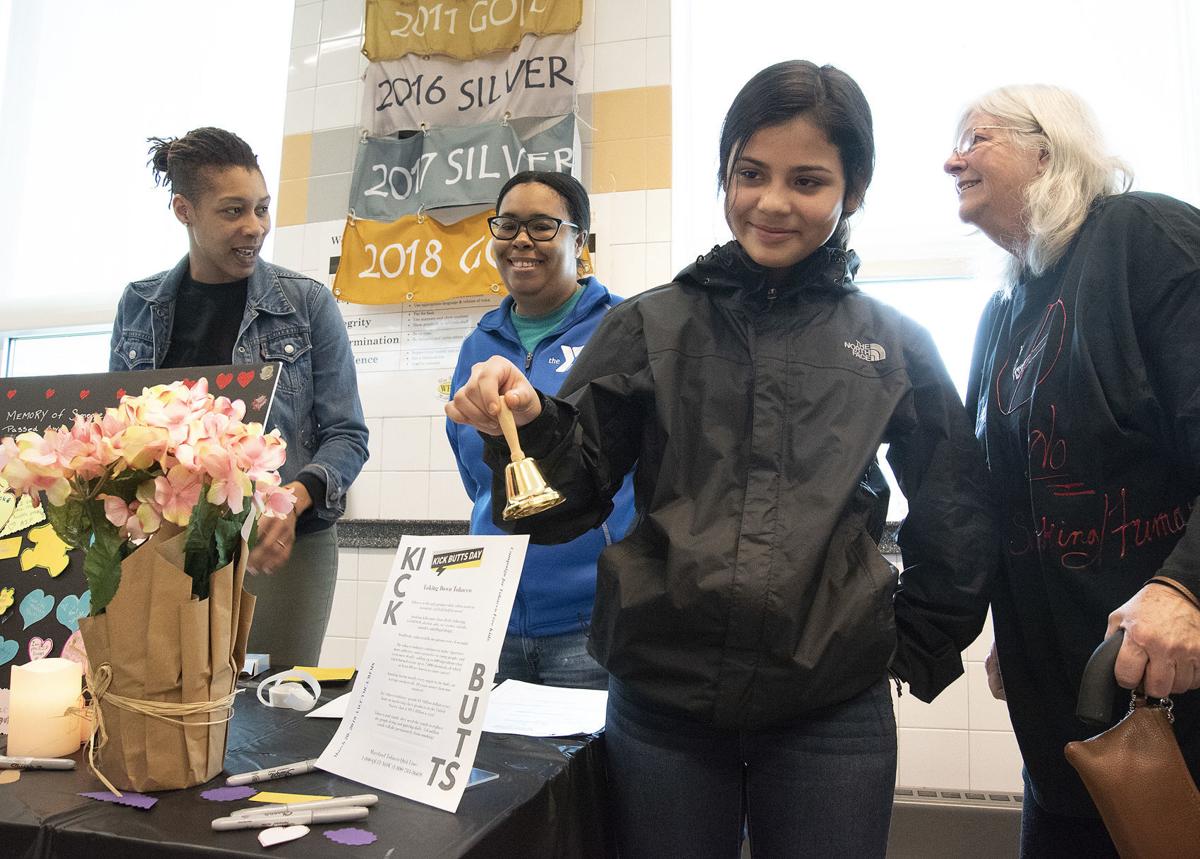 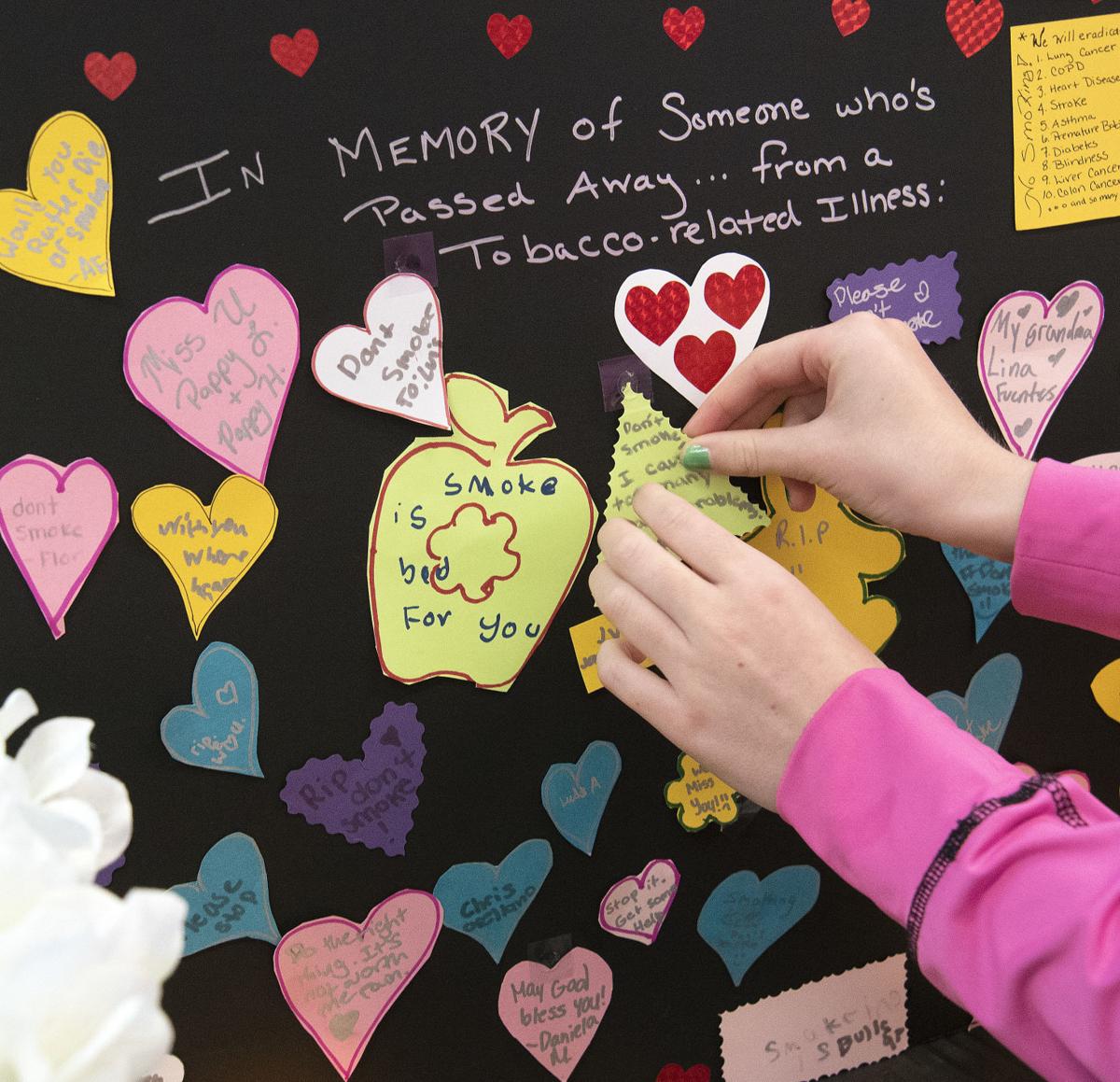 Students at West Frederick Middle School place anti-smoking messages on a board during Kick Butts Day.

Students at West Frederick Middle School place anti-smoking messages on a board during Kick Butts Day.

Amid the steady roar of young voices filling West Frederick Middle School’s cafeteria at noon on Wednesday, an Across Ages volunteer mentor with the Asian American Center of Frederick rang a small metal bell.

While a few students sitting nearby briefly perked up their ears, the tinkling quickly faded. A little over a minute later, the bell rang again, to similar effect.

“Today is ‘Kick Butts Day.’ It is part of the national anti-tobacco day, so we have chosen to do a memorial board to kind of get the message out and have an impact on the youth here at the school,” said Veronica Poole, project director for the Retired & Senior Volunteer Program of the AACF who oversees the Across Ages program. “... So we’re also having one of our volunteers ring the bell every 72 seconds to indicate that another person in the United States has died due to a tobacco-related illness.”

As the lunch period progressed, several students approached the message board to write brief notes in silver marker on multi-colored construction paper cutouts to add to the message board. By the time students began to shuffle back to class, the board was full of heart-rending messages to loved ones: “Grandma R.I.H.” and “Miss you, Pappy L.,” as well as generic anti-smoking slogans and advice: “It’s not good for you!” and “Please don’t smoke.”

Jeannette Bartelt, a 72-year-old who recently moved into a senior apartment community in Frederick, said she tries to use her own experience to help her mentor several youth through the Across Ages program.

“I started smoking in high school, when I was 18, and I’m clean since 2003,” Bartelt said, looking out over the young, smiling faces in the school’s cafeteria. “When I quit, it saved my life. I still have issues with the repercussions; I still have joint pain and I still have cravings, it never really goes away, which is why this is so important to me.”

That kind of firsthand knowledge and passion for keeping youth on the right path was just the right attitude the Asian American Center of Frederick was hoping to promote with the Across Ages mentorship program, said Elizabeth Chung, the AACF’s executive director.

Youth involved in the program, which was launched only recently, were selected based on several factors indicating the need for a stronger or wider support network, Chung said.

“Most of these kids, they either have family that don’t speak English at home, they don’t have resources to go out to do anything, so we’re giving them homework support [or] take them to see a movie,” Chung said. “And every month they [also] have community service and one of the things we want to do is have education, so ‘Kick Butts Day’ is a great thing. It’s really helping the kids not get into smoking.”

More anti-smoking rallies were planned for later in the day Wednesday at other locations across Frederick County, including the Asian American Center at 1080 W. Patrick St., as well as the YMCA of Frederick County at 1000 N. Market St.

Joining AACF leadership and Across Ages mentors at Wednesday’s event at West Frederick Middle School was Frederick city Alderman Derek Shackelford, who praised the AACF’s efforts to bring such a meaningful message to local students.

“Anytime we can help educate our young people and we can educate our citizens in having good health and having a connection to resources, I think it’s a tremendous thing, so I‘ve just come to offer support in any way I can help,” Shackelford said. “... These kinds of collaborative efforts make our community stronger, better and provide the necessary support for our citizens.”

In preparation for the event, the program’s mentors and their student mentees sat down to design black T-shirts featuring anti-tobacco messages as well as facts about the dangers of smoking and using tobacco products. Juan Duran, a West Frederick Middle School sixth-grader who was recently partnered up with his own mentor, James Monroe, wore a shirt of his own design reading “Don’t smoke, be healthy.”

While Juan was hesitant to say too much, he was adamant when asked what he would do if he saw a classmate consider using tobacco.

“I would tell them not to because, if you smoke, you can’t really breathe well anymore and you could die,” he said.

I smoked for around 13, 14 years. When I started cigarettes were $0.30 a pack, when I quit they were $0.35. When I see the prices that they are today I can only feel sympathy for they who shell out that kind of money for something that can potentially kill them. Once I decided to quit it took me about 4 years to do so, but it was one of my better decisions, that's for sure.