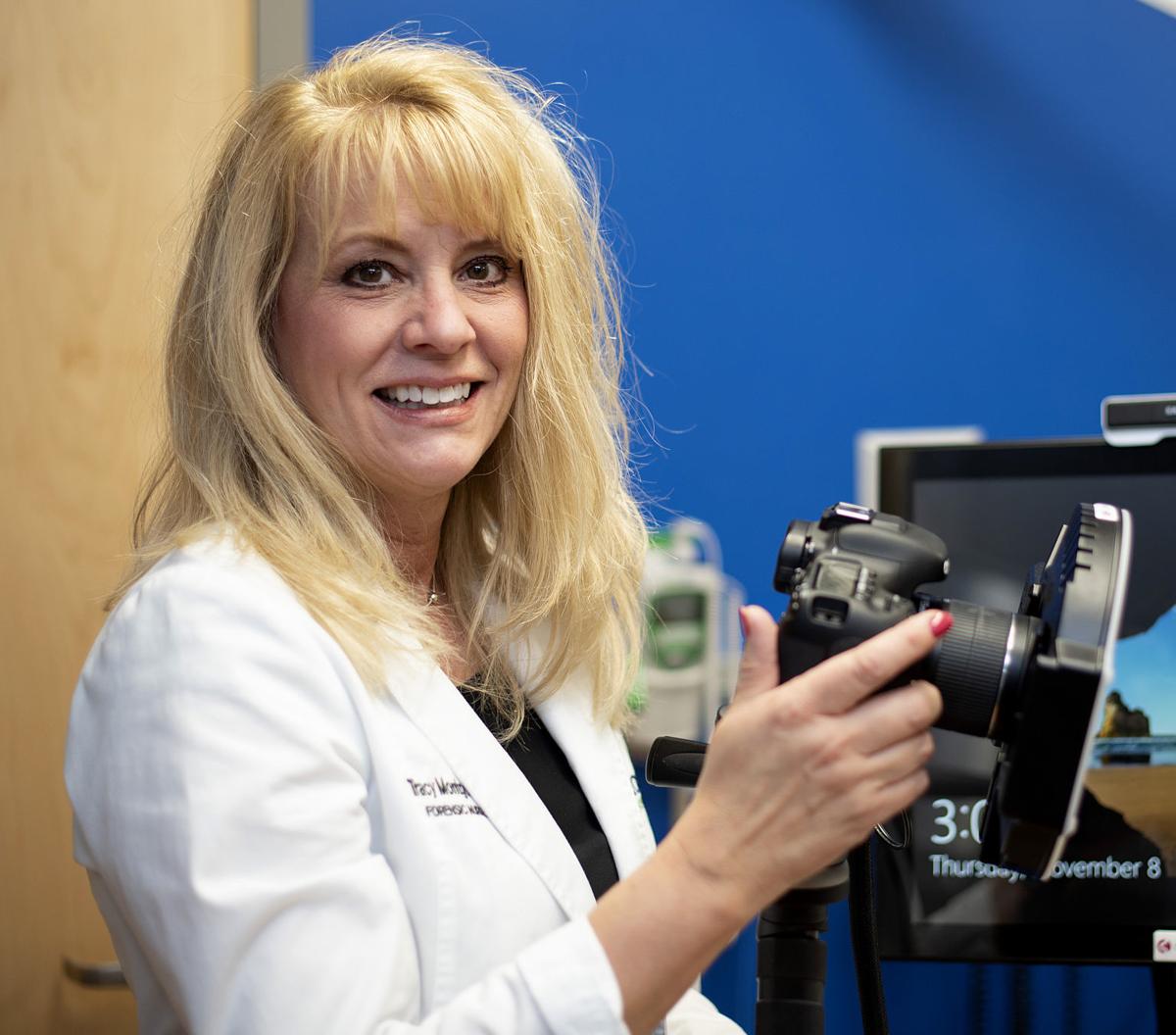 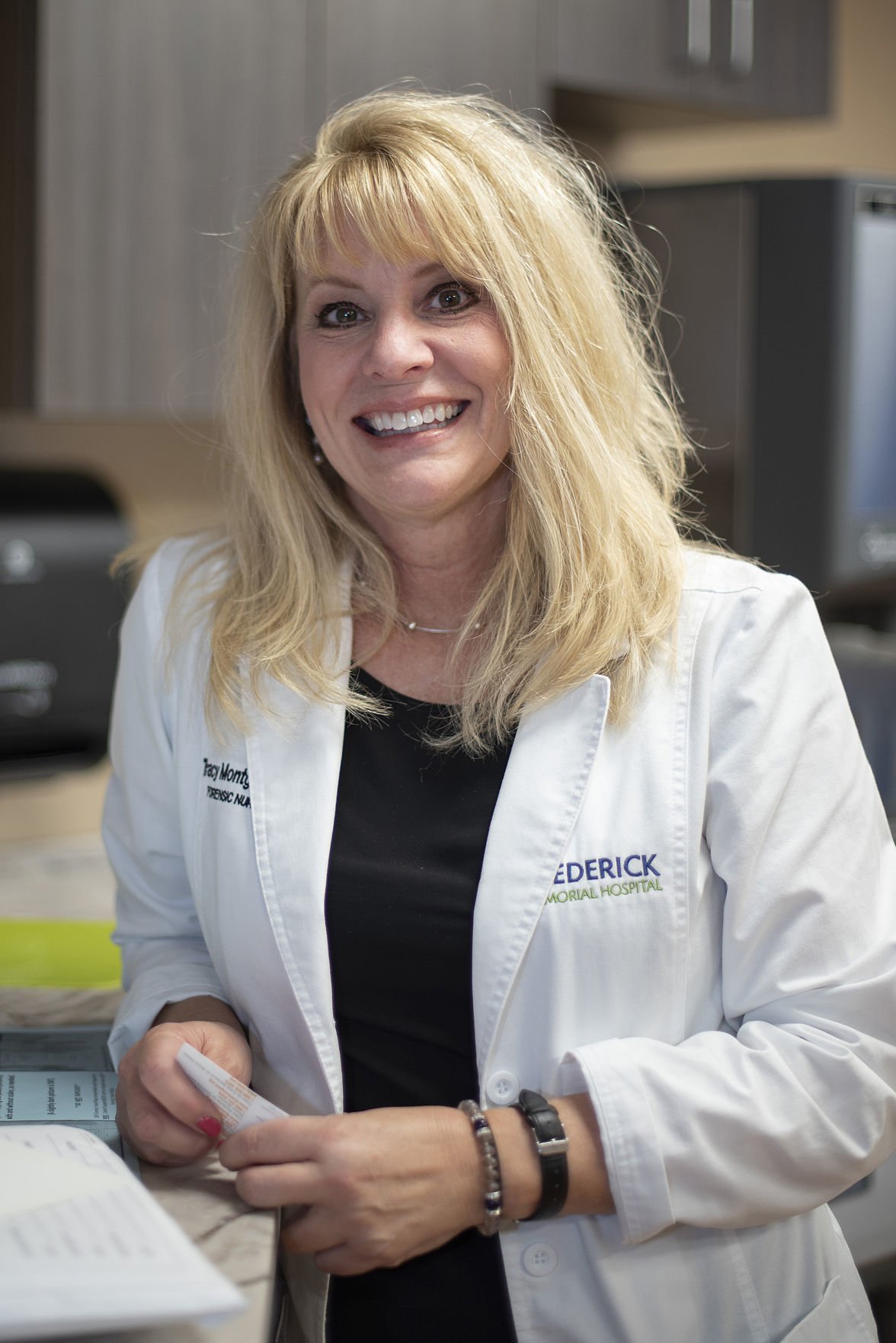 Montgomery has been a nurse for more than 30 years, the majority of which she has spent at FMH. And while most of her time at the hospital is spent in same-day recovery, since January, Montgomery has an additional role: that of forensic nurse examiner.

Montgomery sat in the waiting room of the new forensic suite that opened in October. The suite has three rooms: a waiting area with a couch and armchair for nurses to interview patients, an examination room and a bathroom equipped with a shower.

“This is a safe place to come in a nonjudgmental atmosphere,” she said.

It’s nice for patients to have a quiet area. The old room they used for forensics exams was in the emergency department, where it was loud. And there are the comforts that are provided in the suite, such as the chance to shower and change clothes, especially when a patient needs to turn over their clothing for evidence, Montgomery said.

Safety is huge in forensic nursing, Montgomery said, and she wants people to know that they can come to the hospital.

As a forensic nurse, Montgomery will see patients who have recently experienced domestic violence, sexual violence or child abuse. It’s an on-call job, and her shift usually runs from midnight to noon.

“You have to be married to your phone,” she said. “You can’t leave it anywhere, because you never know when you are going to get a phone call.”

Montgomery will get called in after the patient is cleared by a physician in the emergency department. They want physical injuries to be seen first. Then the patient will be brought to the suite.

They treat the whole patient — the physical, emotional and psychological injuries. And it’s not just the patient; it can be treating the whole family, especially in cases of child abuse.

It’s a process that can last from four to eight hours. Forensic nurses take photographs of injuries, using a forensic camera — the department has a top-of-the-line Cortex Flow forensic camera. They perform blood tests and they might swab for touch DNA. Nurses can swab for DNA on the necks of patients after suspected strangulation, Montgomery said.

It’s all part of collecting evidence that can be used in court cases. Even if a person doesn’t wish to press charges immediately, the pictures and evidence is kept in a file in case charges are pressed later.

And people can come to the suite anonymously, she said, so they don’t have to reveal who hurt them.

Montgomery has yet to testify in court, although it is a large part of a forensic nurse’s job.

Pamela Holtzinger, the forensic nurse program coordinator, and Tressa Bell, a forensic nurse on the team, have testified multiple times, Montgomery said. And when a nurse is called into court, members of the team will often go to support her.

It’s important that the team is close, Montgomery said. They lean on each other when they are dealing with a difficult case. And in forensic nursing, there is such a thing as compassion fatigue. Holtzinger stresses that the nurses have to be able to take care of themselves, Montgomery said, because they can’t take care of others if they are burned out.

“When you have lost compassion, you need to move on,” Montgomery said.

That doesn’t mean there won’t be tough cases, which for Montgomery are the pediatric ones. She’s a mother of three.

But while it’s hard, Montgomery said that forensic nursing was a calling. When she saw the opportunity to join the team and be trained, she said it was like something clicked.

“I can’t imagine not doing this,” she said.

Pam Holtzinger has made it her mission to expand forensic services in Frederick County.

I will be graduating from UMD School of Nursing in December and two of us will be starting at Washington Adventist (one in ED and one in IMCU). Our goal is to become forensic nurses after a year or two of experience. When I heard about forensic nursing, I knew immediately that it was the path for me. Thank you for all you do. ; )

Tracy is a gift from God. She found a job like many has in which they love their job. When you find a job you love, you never work a day in your life. It has to be tuff and difficult seeing and listening to victims especially the little ones and then be able to sleep after your shift. God bless you Tracy Montgomery and all the staff involved[thumbup]