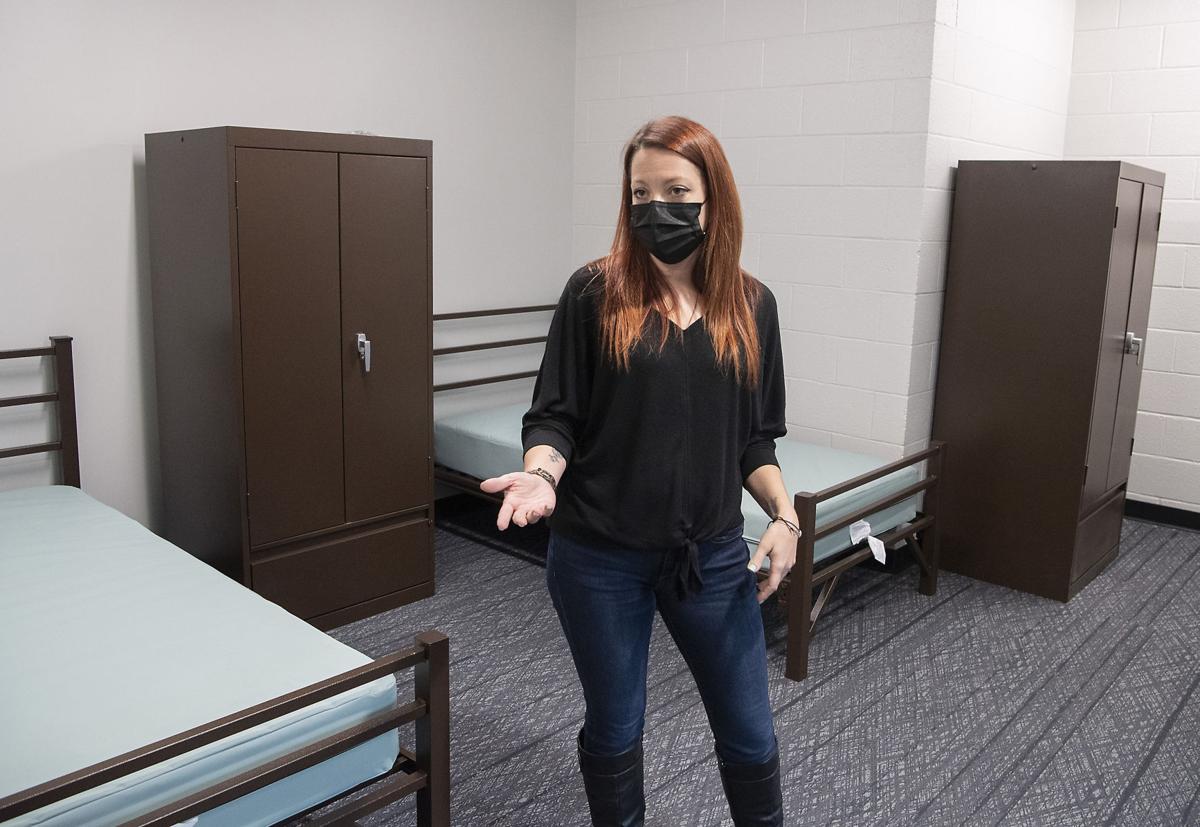 Program Director Britney Zollman shows one of four bedroom pods in the new Mountain Manor at Marcies Choice facility that has been in the works since 2018. 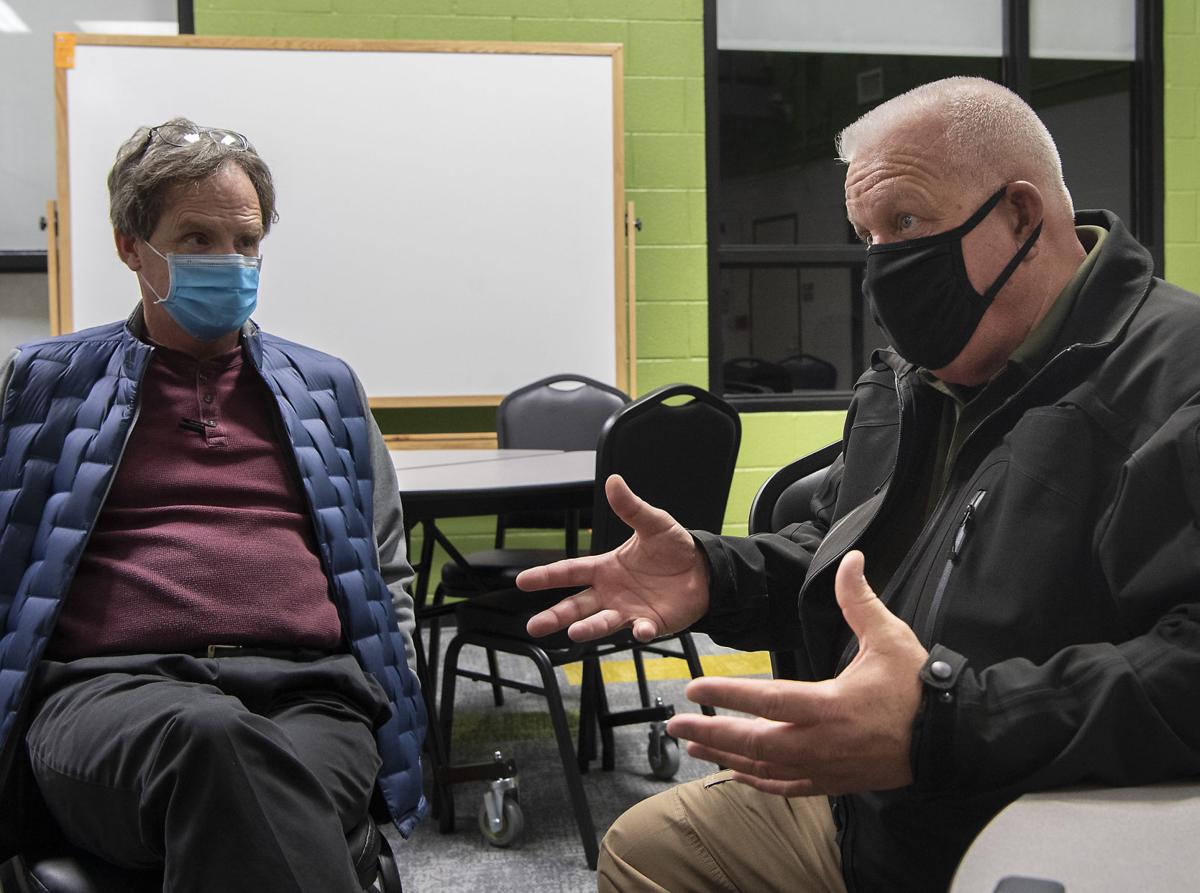 Frederick County Sheriff Chuck Jenkins describes the progress that has been made transforming the second floor of the Frederick County Work Release Center for a space those in recovery can call home while they undergo treatment. He offered the space to the program more two years ago. 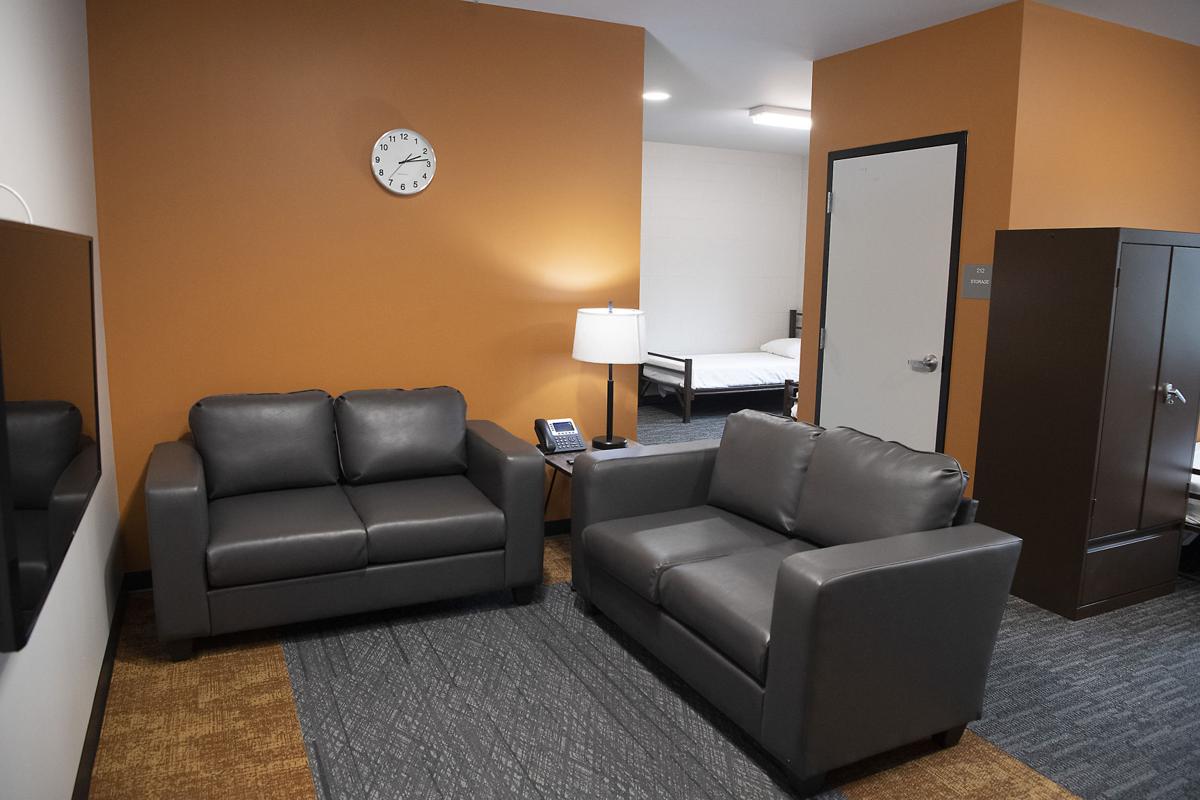 The renovated floor, with an elevator and its own entrance, offers 28 beds in pods of four and 10 on Marcies Choice Lane in Frederick. This is a common area in one of the pods.

Program Director Britney Zollman shows one of four bedroom pods in the new Mountain Manor at Marcies Choice facility that has been in the works since 2018.

Frederick County Sheriff Chuck Jenkins describes the progress that has been made transforming the second floor of the Frederick County Work Release Center for a space those in recovery can call home while they undergo treatment. He offered the space to the program more two years ago.

The renovated floor, with an elevator and its own entrance, offers 28 beds in pods of four and 10 on Marcies Choice Lane in Frederick. This is a common area in one of the pods.

On the second floor of the Frederick County Work Release Center is a space those in recovery can call home while they undergo treatment for addiction.

The renovated floor, with an elevator and its own entrance, offers 28 beds in pods of four and 10 on Marcies Choice Lane in Frederick. Comfy couches provide a place to sit and talk. In the great room, future patients can take their meals at circular tables amid green- and white-painted walls. Colorful swatches of rectangles brighten up the gray carpet. Juice and coffee are on standby.

Mountain Manor at Marcies Choice has been in the works since 2018, when Sheriff Chuck Jenkins offered the under-utilized second floor of the work release building for what he described as a growing need for addiction treatment in the community. Since then, county leaders have been working toward that goal.

Maryland Treatment Centers Inc. will operate the Frederick location, which is preparing to welcome its first slate of patients in the near future, hopefully this week.

Zollman said their goal is to help people transition from intensive care back to the “real world,” with coping skills in place and resources readily available. Patients will attend group therapy, in addition to one-on-one sessions, according to Zollman.

Patients will operate on a schedule with meal times, therapy and recreation planned out.

Zollman comes from Maryland Treatment Centers’ Emmitsburg location, where she worked for about 10 years. The Mountain Manor Treatment Center in Emmitsburg offers 18 beds and more intensive services, she said, so some patients may transition from there to the Frederick facility. Patients may also come from the hospital. She acknowledged every recovery situation is different, and how patients arrive into their care will likely vary.

Zollman said the Frederick location was needed. Sometimes people called the Emmitsburg facility from the city of Frederick and weren’t able to travel to the northern tip of the county.

Last year, an average of five people overdosed from heroin or a related drug every week in Frederick County, according to County Executive Jan Gardner. While there were fewer overdoses (275) in Frederick County than the past five years, there were at least 59 drug-related deaths, which represents a 20 percent increase from the year prior.

Sean Nicholson, co-owner and operator of Solid Ground Recovery, was once a patient at Mountain Manor Treatment Center in Emmitsburg. Though he was not familiar with the details of the new facility as of Thursday, he said treatment services are needed. Solid Ground Recovery seeks to provide transitional services and support for people in recovery from substance use disorder.

“Mountain Manor has been providing quality treatment, I know, for many years to Frederick County,” he told the News-Post. “I’m excited that there’s more options for people suffering from substance use disorder and there will be more resources available.”

The Emmitsburg facility will coordinate admissions for the Frederick location and can be reached at 301-447-2360.

Payment goes through a patient’s insurance, but Zollman said they’ll work with people lacking insurance, too.

To protect the population from COVID-19, she said they will conduct rapid tests and screen people before admitting them. Masks are required inside the facility.

Zollman expects patients will stay up to 90 days, but when they leave depends on their progress. When a patient does move on, they won’t be cut off from their support system either. Zollman said they’ll be connected to resources to continue their treatment outside the facility.

The sheriff is hopeful the treatment center will improve public health.

“I think it’s going to have a huge impact by the simple fact the resource is now here, it’s available. I think people are going to realize it’s here and take advantage of it for their family members,” Jenkins said.

Merely locking a person up and charging them doesn’t defeat their addiction, according to Jenkins.

“Just putting them in jail doesn’t really do them any good. They don’t really get the treatment they need,” he said. “I’m about putting drug dealers in jail, not drug users.”

Opening day has been a long time coming, and Gardner’s Chief of Staff Margaret Nusbaum said there were some hurdles along the way that affected the timeline (they’d hoped to open in December), like an unexpected pandemic and building a foundation for the elevator. The county devoted approximately $1.43 million to the renovations, according to Nusbaum. Of that figure, $500,000 came from a state capital grant, and about $160,000 came from state behavioral health services funds.

Zollman is hopeful they can welcome patients soon, they’re just waiting for their Medicaid provider number. They’re also hiring at the Fredrick location.

Approximately three years after Jenkins envisioned the treatment center, he took a tour of the facility Wednesday.

“I don’t think it could have turned out better,” he said.

Looks like the Jenkins Haters couldn't find anything good to say, so they don't say anything. Not surprising.

Thank you Sheriff Jenkins for your concern and support of the recovery community.

This center will save many families in Frederick from suffering the loss of a loved one, friend, neighbor.