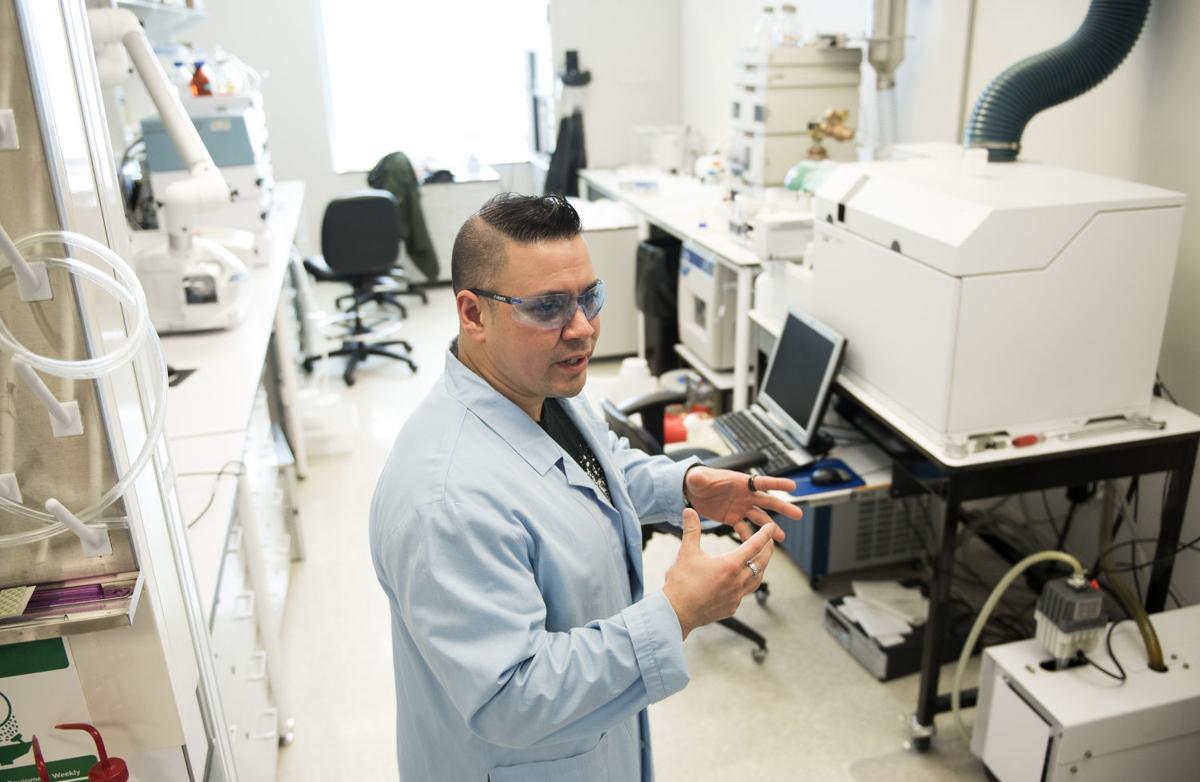 Jeff Clogston, principal scientist at the Nanotechnology Characterization Laboratory at the Frederick National Laboratory for Cancer Research, discusses work being done to further the development of cancer medicines. 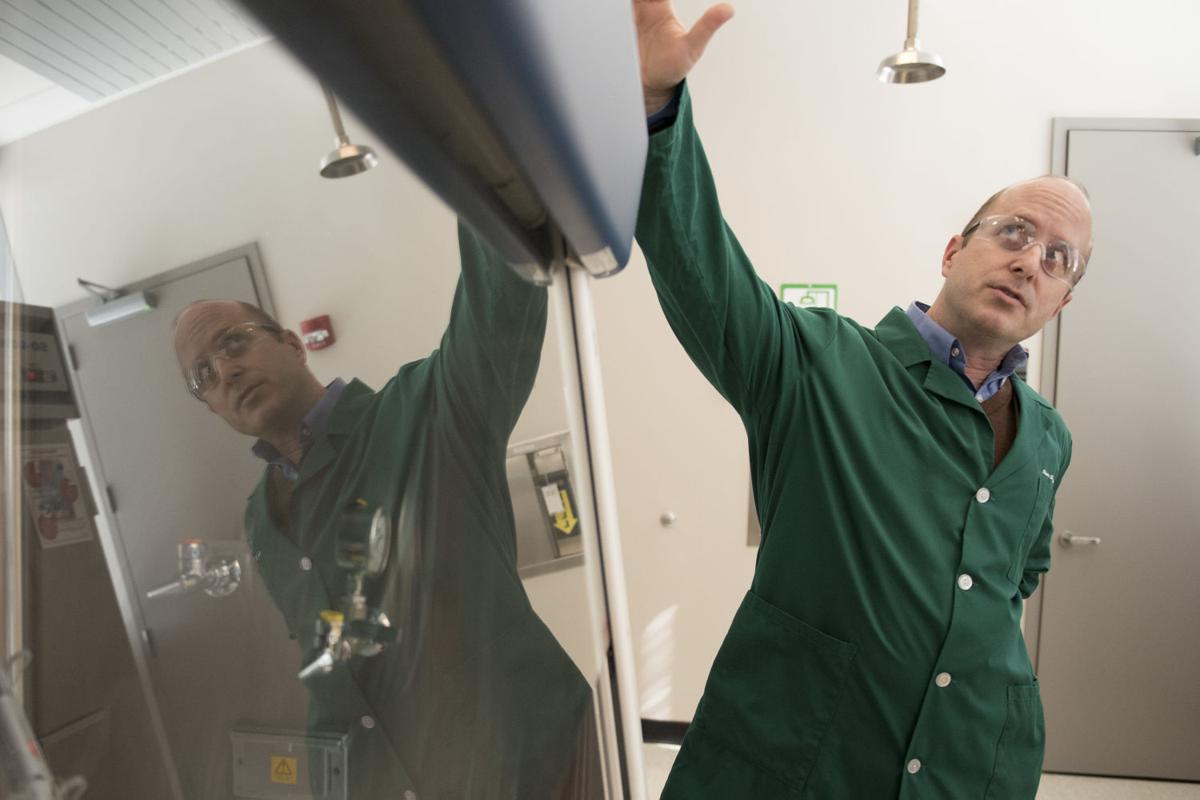 Steve Stern, senior principal scientist at the Nanotechnology Characterization Laboratory at the Frederick National Laboratory for Cancer Research, discusses some of the equipment researchers use in the lab.

Jeff Clogston, principal scientist at the Nanotechnology Characterization Laboratory at the Frederick National Laboratory for Cancer Research, discusses work being done to further the development of cancer medicines.

Steve Stern, senior principal scientist at the Nanotechnology Characterization Laboratory at the Frederick National Laboratory for Cancer Research, discusses some of the equipment researchers use in the lab.

The Nanotechnology Characterization Laboratory is housed in the Advanced Technology Research Facility at Riverside Park in Frederick. The nanotechnology lab is run by the Frederick National Laboratory for Cancer Research, which operates under a contract with the National Cancer Institute.

The nanotechnology lab’s strengths have historically been in “characterizing” nanoparticles. Characterizing in this usage is a broad term that includes measuring the size of nanoparticles, how they behave in vitro in a lab setting, how they might behave inside an animal or human body, and generally the properties they exhibit when interacting with cells. In this way, drug companies developing nanoparticles to diagnose or fight cancer can know more about the potential efficacy, or toxicity, of their nanoparticles. Some of those nanoparticles are the key active ingredients in cancer-fighting drugs.

“We have 10 years’ experience characterizing every type of nanomaterial you can think of,“ senior principal scientist Steve Stern said. The goal of the lab is to “characterize” or describe and measure a nanoparticle within one year of submission.

But now, the lab is expanding into helping to formulate drugs.

The lab is doing that by partnering with drug companies through Cooperative Research and Development Agreements, also called CRADAs.

“This [agreement] is just the mechanism to do collaborative work with companies,” Stern said.

The nanotechnology lab is currently working with Pfizer and AstraZeneca.

By partnering with drug companies, the lab can take a closer look at cancer drugs and other medicines while they’re in development. Tinkering with nanoparticles at the earlier stage can help the company determine the best dosage, and thus lower the risk of toxicity.

“These CRADAs allow us to be relevant,” Stern said.

At the nanotechnology lab, researchers use a variety of tools to work with nanoparticles.

“Dynamic light-scattering is the workhorse in our lab,” principal scientist Jeff Clogston said.

The measurement tool uses light to track the random motion of particles in a solution and thus determine how big the particles are. Since the size of a nanoparticle can give clues to its function, measuring size is paramount.

One stainless-steel machine, used to make nanoemulsions, looks much like an espresso machine, but has syringes instead of a dispensing nozzle.

“It looks like something you might find at Starbucks, but we use it for nanoformulation,” Stern said.

Piotr Grodzinski is director of the National Cancer Institute’s Office of Cancer Nanotechnology Research. He expects more agreement-based partnerships, like the one between the lab and AstraZeneca, in the future.

“With nanomedicine maturing, more and more companies are being interested in this mode of treatment,” Grodzinski said in an email. “They seek partnerships with experienced entities, and [Nanotechnology Characterization Laboratory] is a natural choice.”

Since nanomedicines are applicable outside of cancer treatment, Grodzinski said the lab is also discussing opening up their capabilities to “concepts beyond cancer.”

The cancer research going on at the Nanotechnology Characterization Laboratory in Frederick is so promising, and now so much in demand worldwi…

"The nanotechnology lab is run by the Frederick National Laboratory for Cancer Research, which operates under a contract with the National Cancer Institute." The DoD does not fund this lab, according to the article. NCI is funded by NIH.

Incredible! Ironically I was watching an old "Outer Limits" last night and the story was about a an old scientist who was in prison and had developed "nano-machines" and they could learn and evolve.

The scientists say that they're "characterizing" cancer treatments--whatever that means--but if you read between the lines it is perfectly obvious that the very same techniques can be used to develop nano-robots of the very kind warned against in that prescient episode of the "Outer Limits." The scenario is known as "grey goo," and there is a United Nations convention against biowarfare. One would think that the reporter would have noted the fact that this is all being funded by the Department of Defense, which seems significant. One needn't be paranoid to conclude that this has nothing to do with Starbucks.

And Monsanto is in there too..