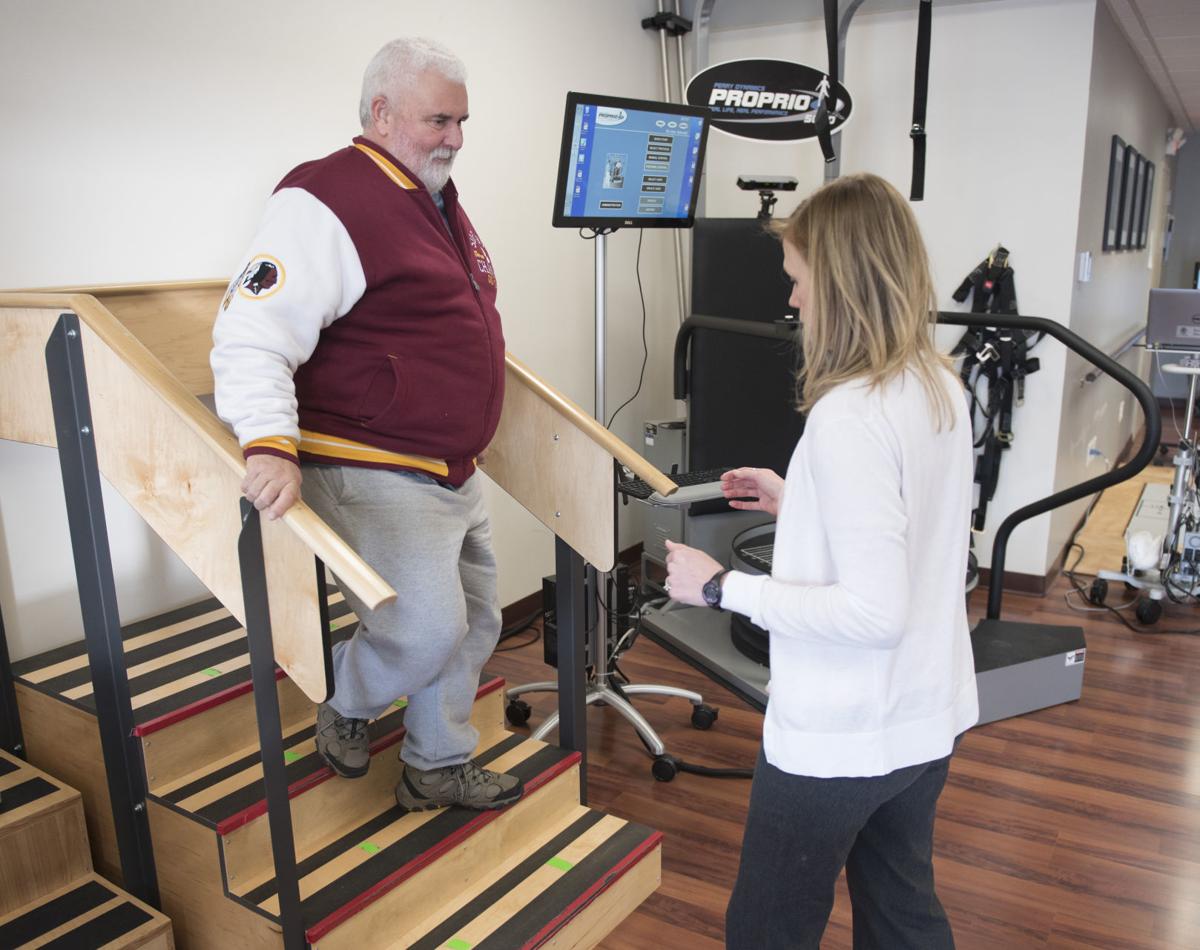 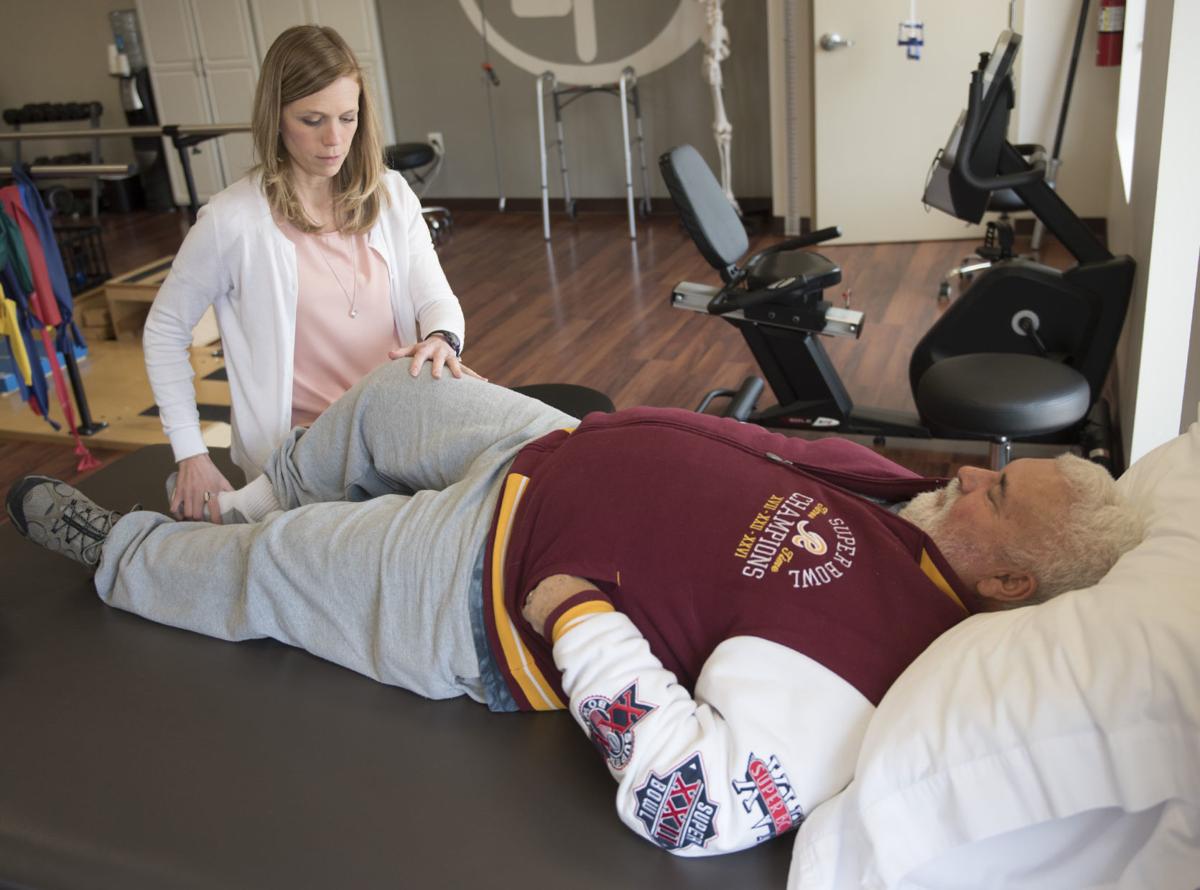 Physical therapist Kelli Laffin, of the Baker Rehab Group, manipulates the knee of patient Michael Derflinger, who is recovering from a joint replacement, during a recent session. 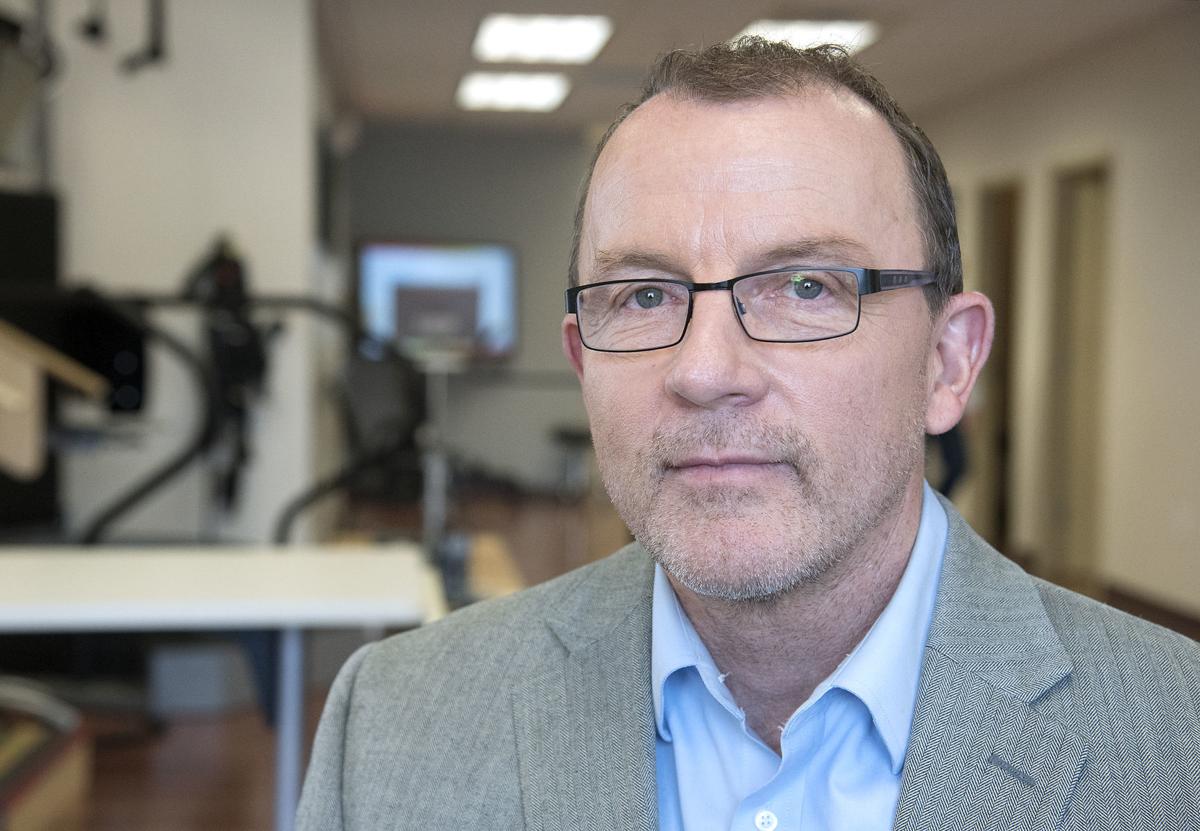 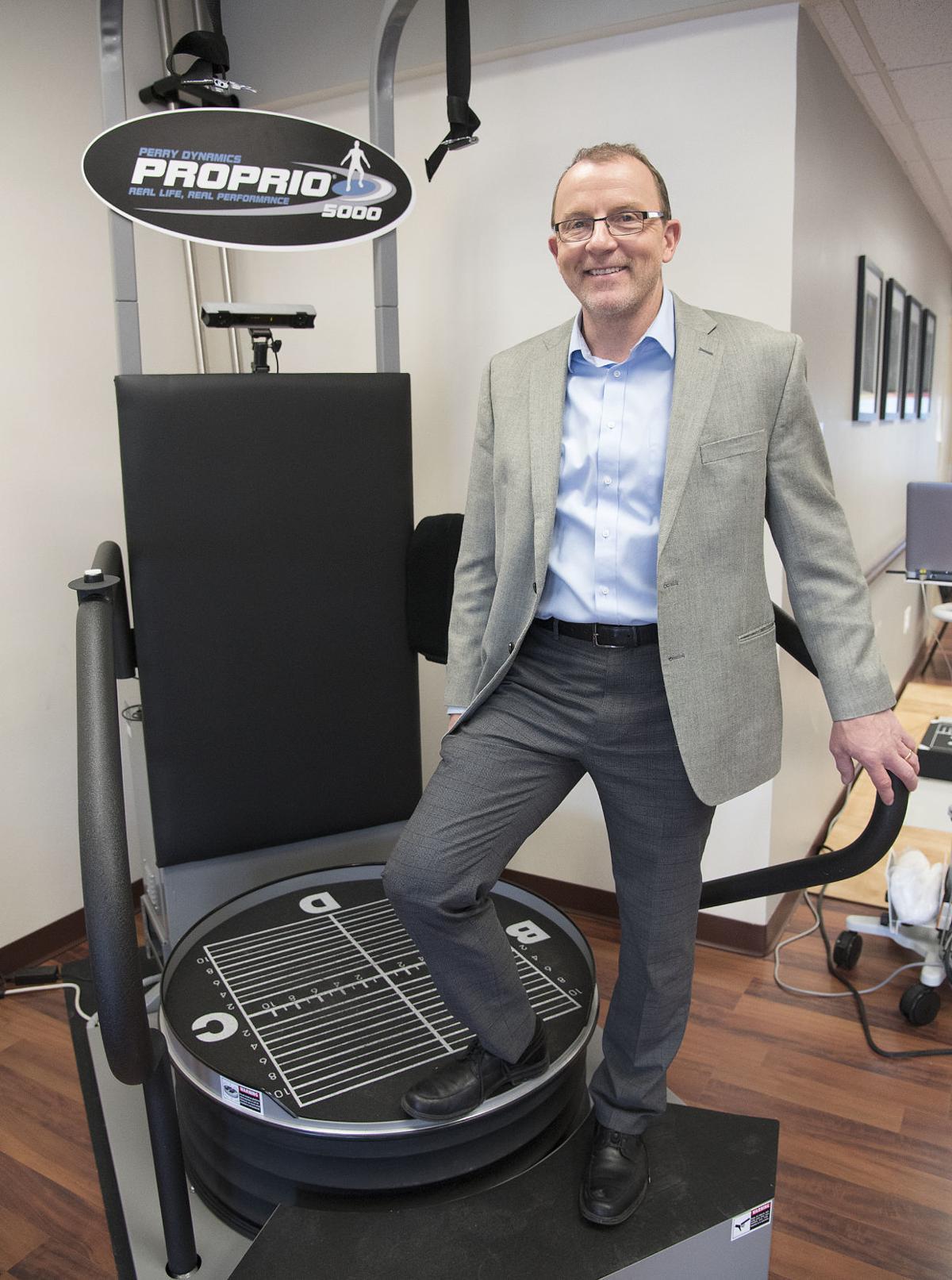 Physical therapist Kelli Laffin, of the Baker Rehab Group, manipulates the knee of patient Michael Derflinger, who is recovering from a joint replacement, during a recent session.

If you talk to his doctors, you’ll learn there’s a lot that’s exceptional about Michael Derflinger. For John Baker, a physical therapist and the owner of Baker Rehab Group in Frederick, it’s the fact that his 64-year-old patient was able to undergo a complete knee replacement surgery — without the use of opioids — on March 27.

Derflinger recovered so well, Baker said, that he was able to drive himself to his first outpatient physical therapy appointment this past week.

“That’s virtually unheard of,” Baker said. “But because he recovered without the help of narcotics, there was no cognitive impairment. His reaction time is just like anyone else’s.”

Completing a knee replacement surgery without the use of opioids was also a first-time accomplishment for Derflinger’s medical team, which included Dr. Eric Shepard — the director of anesthesia for the Frederick Surgical Center — and Dr. Robert Fisher, an orthopedic surgeon with Monocacy Health Partners.

Total knee replacements are performed more than 600,000 times a year, according to the federal Agency for Healthcare Research and Quality. But in many cases, pain management after the surgery involves the use of opioid medications. In 2006, 1 in 4 patients were prescribed opioids alone after hip or knee replacement therapies.

While that number has gone down over the years, 1 in 12 patients were still prescribed opioids alone in 2014, according to research by the American Society of Anesthesiologists.

Increased concern over the potential for opioid abuse and addiction has led both surgeons and anesthesiologists to consider new approaches to pain management. Both Shepard and Fisher were quick to emphasize that not every patient would be able to recover without the use of narcotics.

But in Frederick, and practices across the country, minimizing opioid use has become a priority.

“We never want to give the impression that a patient can go through a knee surgery and not need a single opioid,” Shepard said. “But up until recently, they were really the only drug considered a mainstay of postoperative care. That’s something we’re trying to move away from.”

“It’s the proper way to go,” Fisher added. “And it’s something patients are asking for. If you know anything about opioids, you know they make you groggy and sleepy. They constipate the heck out of you. Those aren’t particularly nice things to have happen.”

Reducing the use of opioids in recovery is largely the result of several recent medical advances. One prime example, according to Shepard, is the use of new drug combinations that don’t involve narcotic painkillers.

Before Derflinger’s operation, Shepard injected a long-acting dose of Exparel — a nerve blocker that’s marketed as an alternative to opioids — behind his knee. Fisher also injected Exparel into the soft tissue of Derflinger’s knee after he inserted the implant device, but before he closed the wound.

“We basically made a 360-degree ring of numbing medication around the patient’s knee before and during the surgery,” Shepard explained.

After Fisher closed the incision in Derflinger’s knee, Shepard inserted another nerve block into the patient’s thigh and connected it to a catheter with a self-operated pump. For three days after the surgery, Derflinger was able to squeeze the device and release more medication if he was in pain.

The doctors said they do prescribe opioid painkillers after surgery, along with medications such as Tylenol and anti-inflammatories, but the patient can decide whether to fill it.

“This guy was exceptional,” Fisher said. “He didn’t take any. But we’ve significantly reduced it for other patients. I’ve had others who have only taken maybe six or eight pills over a couple of days.”

The move away from opioids can also be attributed to other medical developments in the past several years, Baker said. One is the broader trend of performing total joint replacements at independent outpatient clinics — including the Frederick Surgical Center, where Derflinger was treated — rather than in the hospital.

Performing surgeries at an outpatient site is generally less expensive and can help patients recover more quickly, according to Baker. Most patients are more comfortable at home, he said, and are encouraged to move independently rather than being confined to a hospital bed.

Derflinger said he chose an outpatient center for his second knee replacement surgery in March, largely because the facility was able to schedule him sooner than the hospital. But he did have surgery at Frederick Memorial Hospital for his first knee replacement — on his left knee — in 2009.

Derflinger said he did notice a difference in postoperative care after his second, outpatient procedure.

“It was just more relaxed,” he said. “I had to stay for three days after my surgery at the hospital, but this time, I was able to come right home. So you’re at home, you’re going to rehab much more quickly — I was surprised by how fast I did recover.”

Baker is also working with surgical centers in Frederick to implement a new model of patient care. The new protocol — often called the “physical therapist as navigator” model — requires more extensive collaboration between providers, but often leads to better outcomes for patients.

“Under this protocol, physical therapists are almost acting like social workers,” Baker said. “So, we’re meeting with the patient a month before surgery to do a home safety assessment and make sure they’re a good candidate for outpatient surgery. We’re doing physical therapy in the home for the first week after the surgery. And we’re coordinating with the surgeon and the anesthesiologist on the best plan for treatment.”

The process can be time-consuming for all three providers, but also facilitates more customized treatment plans. When providers are unified on a plan for pain management, it can also help reduce the use of opioids, according to Shepard.

Research has shown that the model has better outcomes for patients, he added.

“It’s very time- and resource-intensive, but this is the gold standard,” Shepard said. “And we’re trying to emulate what’s best for the sake of our patients.”

The option for the patient to fill after-surgery pain medication has always been optional. Unfortunately, hospitals are now even reducing hospital stays for major surgery more than ever. I was talking to my doctor last week and I got into a conversation with him about a friend of mine who just had a double mastectomy two weeks ago and she was just in the hospital overnight. And I told him about another lady who had a regular surgery (involving one breast done as a mastectomy (not "just" a lumpectomy) where it was done as out-patient surgery. Because of the restrictions on opioids (policies on health insurance now that have changed the waiting time before the prescription can be filled), the patient was unable to get her
pain medication on the way home from the hospital. As I've posted previously, patients are unnecessarily suffering because of the opioid paranoia that has infiltrated so-called "pain management."

I'll bet those shots behind the knee felt real good. (Sarcastic). I've known some people who have had those nerve blocks. Not fun. In fact, they decribed it as torture. But, I'm glad that the patient interviewed for the article did so well. But, another thought is that the hospitals have cut down on satisfactory pain relief anyway so much that one might as well be home (if the patient can survive the ride home with bumps in the road and possible delays due to traffic).

I just hope I die in my sleep instead of going through the hospital experience again.
I also wish the same for those I know who have been made to suffer unnecessarily and whatever people will face in the future.

“1 in 12 patients were still prescribed opioids alone in 2014, according to research by the American Society of Anesthesiologists.”

So, 11out of 12 patients receive no opioids? So really, this man’s story is not that exceptional. In fact, it’s what happens in the overwhelming number of cases.

Actually, in this case, this patient's story may very well be exceptional.....but having more information on local practice patterns would help to tell us that. The 2017 research cited in the article from the American Society of Anesthesiologists is derived from national data. It doesn't tell us what is actually happening here in Frederick. It's very possible that not every orthopedic surgery/anesthesiology practice in town offers patients the option of pain relief other than opioids, or has success with this alternative, and as a result far greater than one in 12 local patients could still, in 2018, be receiving primarily opioids for post-op orthopedic pain. I think the valuable message of this article is that prospective patients reading it have learned, as I did, that post-op pain management minus opioids IS available here in Frederick in THIS practice (there may be more), and that a critical question pre-op.......for all patients and their families.....is to ask how their pain will be managed....and to know there are now viable alternatives, to starting opioids. Thank you to the patient, the FNP, and the doctors and therapists involved for sharing such valuable information on improving patient care as the opioid epidemic continues to rage.

Can't say enough good things about Baker Rehab. Both John and Kelli provided excellent care and rehab after both my knee replacements.