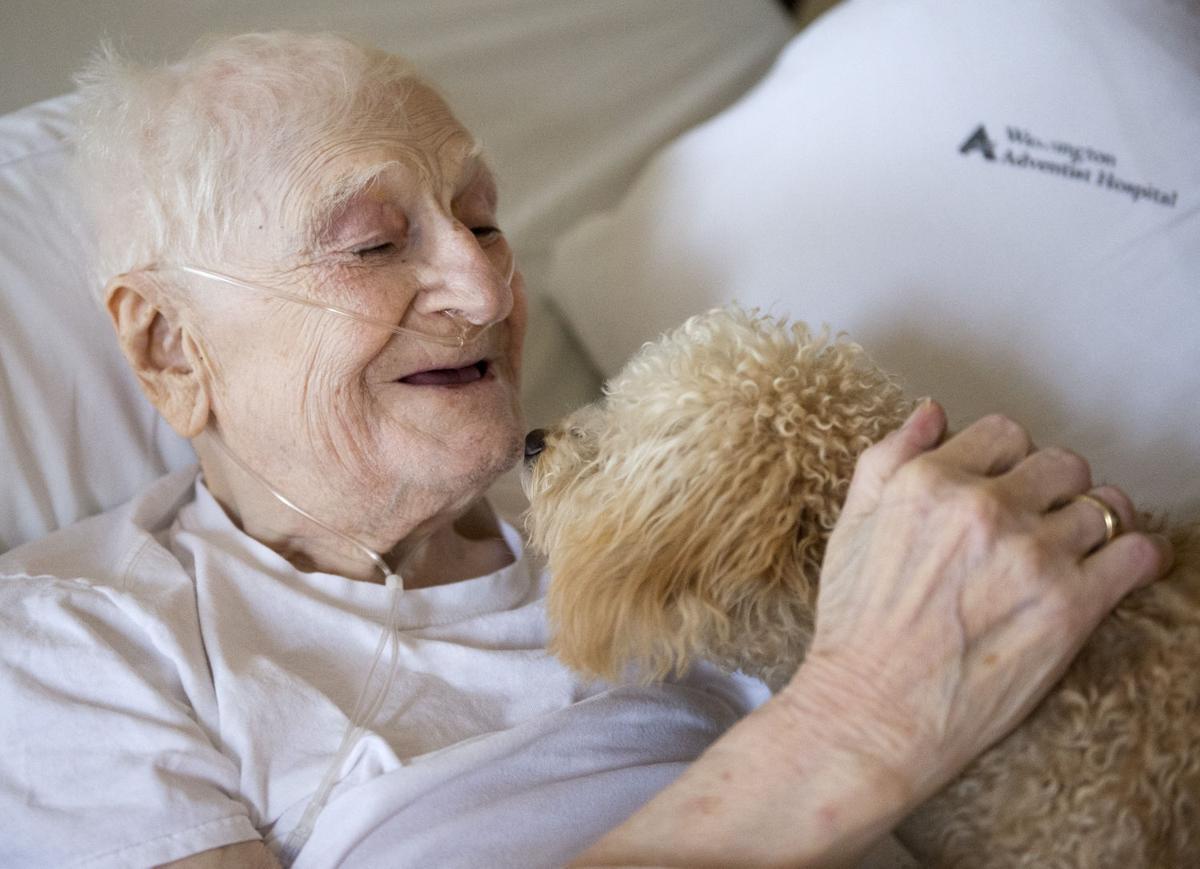 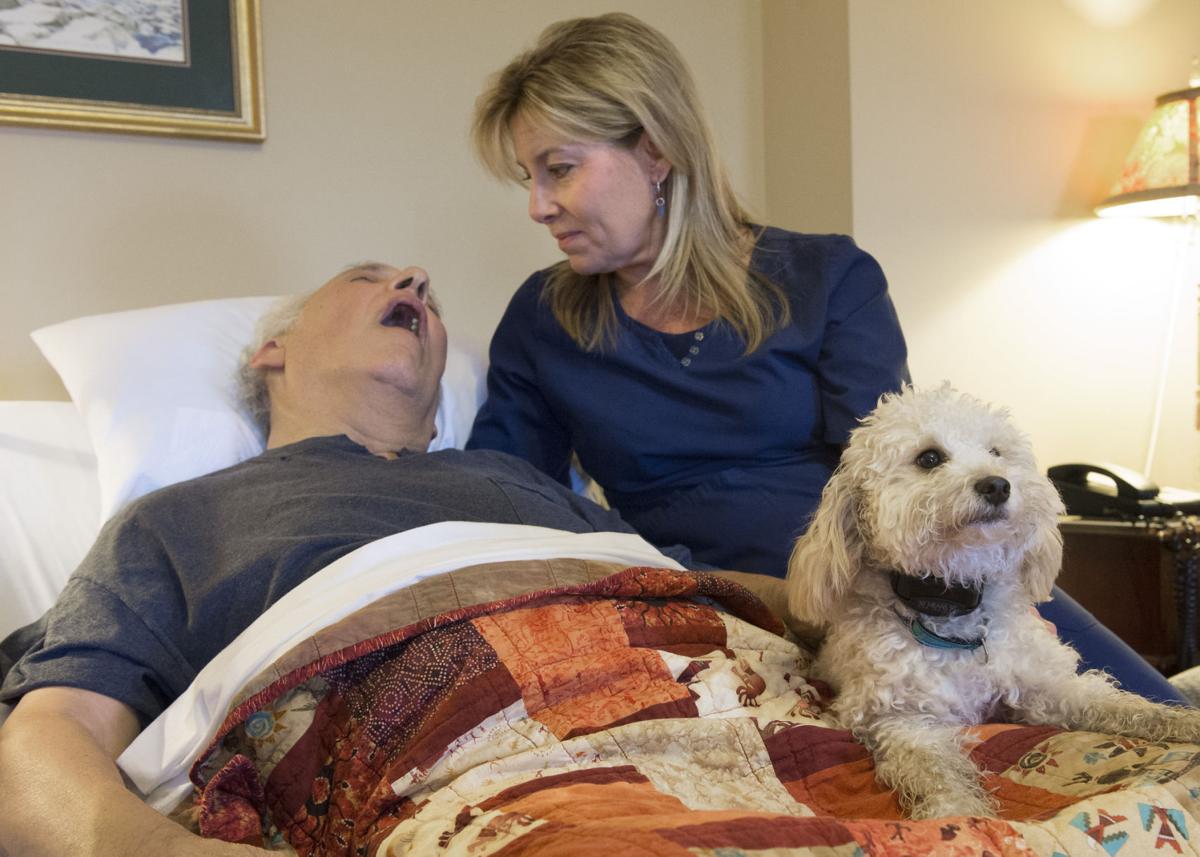 Judy MacLaren sits with her husband, Michael Samet, at the Kline Hospice House Wednesday morning. Joining them on the bed is Steeler. 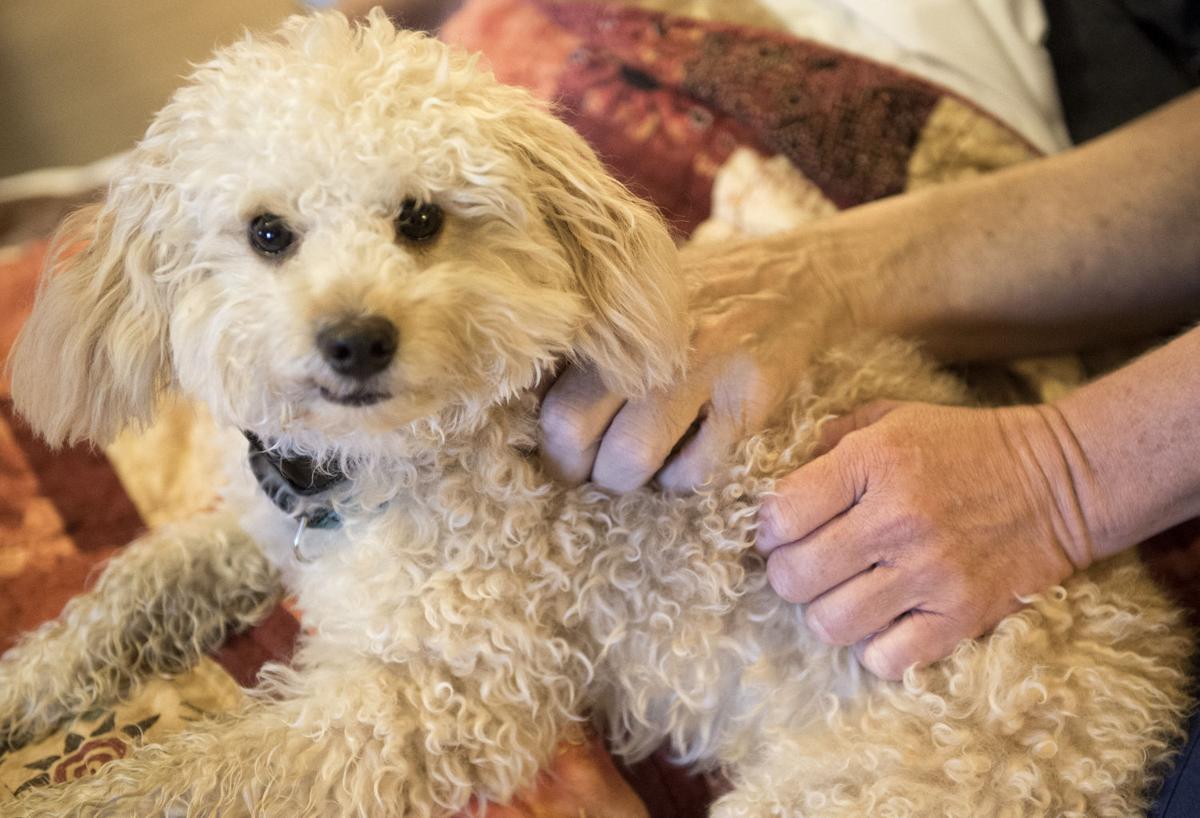 Judy MacLaren sits with her husband, Michael Samet, at the Kline Hospice House Wednesday morning. Joining them on the bed is Steeler.

A new friend has been making Kline Hospice House a warmer place to be for patients, their loved ones and staff

His name is “Steeler” and he is a 10-month-old goldendoodle puppy. He is still in training, but has started making hospice visits with his trainer and main handler.

Laurel Cucchi, the executive director of Hospice of Frederick County, and Doug Stauffer, the president of Stauffer Funeral Homes and Hospice board member, said getting Steeler was a joint venture. It all started about a year and a half ago when the funeral home brought on Steeler’s brother, ironically named “Raven.”

The idea to get Raven was initially a bit of a gamble but Stauffer said he knew it paid off when the dog went to an upset child during a funeral and never left the child’s side. Dogs are a common denominator among many people, and having Raven on hand usually made them smile, even during tough and confusing times.

Since Raven was doing so well at the funeral home, Stauffer and his daughter-in-law, Courtney, assisted Cucchi in getting Steeler from the same Alabama breeder. The main difference between the two dogs is that Steeler is considered miniature, so he’ll be able to be on patients’ beds.

Both dogs are being trained by Sit Means Sit Dog Training of Frederick. Stauffer’s is paying for all of Steeler’s expenses and Greenbriar Veterinary Hospital is donating its services for health care.

Steeler has been with Hospice since May and is being fostered by an employee who lives near the hospice house in Mount Airy. The plan is for him to spend time with hospice patients, in addition to people in nursing homes, assisted living facilities and Frederick Memorial Hospital.

Even early in his training, Cucchi said patients have been responding well to him. A nearly comatose patient moved his hand for the first time in a while when he felt Steeler. Another patient laughed when he noticed Steeler seemed drawn to his dentures, Cucchi said.

“He’s adorable and loving and quickly became a mascot for our office,” she said.

Sarah Simpson has been training him, mostly on being secure, comfortable, obedient and having a calm demeanor. She’s also teaching him a few tricks to provide much needed light moments.

“He’s paid with praise and love, which is good for his job because all people will want to do is love him,” Simpson said.

When she first started working with Steeler, Simpson said he was insecure and fearful about being away from his handlers. Simpson has been getting him to the point where he can be with a patient and not want to go back to her. She’s also making sure he can handle things like loud coughing, skin conditions and oxygen tanks without getting spooked and barking.

Having Steeler with patients and their families has been beneficial in providing both comfort and a distraction, Cucchi said.

“It’s a non-chemical way to actually soothe the patient, reduce anxiety and give more endorphins to feel more at ease,” she said. “It’s a positive distraction. You can’t live in the pain of watching someone you love die or the pain of your grief 24/7.”

Recently, a patient’s wife went to see Steeler before leaving Hospice House, just so she could spend a moment with him.

Steeler has also been good for Hospice employees, whose job can be very emotionally trying, especially when young people are patients, Cucchi said.

The puppy will have about six months of consistent training, but Simpson said she will stick around for as long as she’s needed to offer support.

“With him and Raven, they’re in a special kind of job, so I’m here as long as I need to be,” she said.

What a wonderful thing Hospice and the Stauffer’s are doing for their families. This picture captures the pure joy the dogs are bringing and the love they are giving. I know that Hospice would never allow any photo to be taken without any permission. They are a very ethical and amazing organization. The dogs bring a therapy to the patients and the families that no human can. This article shows some light about helping these families during their hardest days.

This is so great, I have been with my family through bouts of cancer, weakened hearts and terminal diseases, the animals always made them feel better!

The picture and how it conveyors such joy is simply beautiful.

I see no issues with the pictures. In the one first presented in the online article the gentleman is smiling from ear to ear. He looks good and is obviously enjoying his contact with the pup. The second and third pictures are of a husband and wife, and while the husband isn't positioned well in the photo I am absolutely positive that should she have had objections to the picture being taken they would have been voiced and the picture(s) not shown. Just because YOU are uncomfortable looking at them doesn't mean the subject(s) in them are. I see people who are either obviously happy or not in discomfort, being taken care of and being given the opportunity for comfort from a very cute animal. Having seen others at the end stage of life in institutions, hospitals and nursing homes in much less salubrious conditions I can assure you there is nothing wrong with these individuals' pictures being published. You should be comforted by the fact these gentlemen haven't been forgotten or warehoused out of sight and are obviously being treated compassionately and well.

As a Hospice employee for greater than 10 years, I can assure you that death is NOT glamorous. Granted this photo wasn't taken at the best angle, it portrays death. Death isn't what the movies or television make it out to be. The dying process often takes days, even weeks. One simply does not 'lay down and die' with their hands across their chest, eyes closed, mouth shut, like actors do on TV. The ones who are commenting how disrespectful and awful this photo is have obviously not experienced death. Further more, had you paid attention, you would see that his WIFE is sitting by his bedside and allowed the photo to be taken and a waiver is signed upon admission to the Kline Hospice House, granting permission for photo/media release if the opportunity arises. Also, the printed version of FNP has a wonderful picture of a man with a smile from ear to ear with Steeler. That picture failed to make it online.

Directing this to the hospice employee: you are really condescending and are assuming a lot. I am very aware of the dying process. I researched this on my own as my mother continued to go downhill over several months. Yes, I noticed that his wife is in the picture. Nothing in the article states that permission is granted beforehand for permission to take pictures. Oh yes, I've seen death. I saw the grotesque faces of my mother in agony. BTW, she was not being medicated satisfactorily. I had to take charge and then she was given more morphine (in liquid form put into her open mouth). I'm getting a little off-subject here, but believe me, I've seen my late mother's situation as well as other elderly in my family.

I was not directing my comment to you. I was making a blanket statement to the other comments about how "awful the photo was" to make the point that death is part of life and this photo is in fact real life, regardless of how the patient looks.

I don't find your reply "condescending." I would accept that you have more experience than most with the facts behind this article. I thought the photo was fine - he is smiling. As someone with 90+ year old relatives, maybe we should get them out more...you think you want to live a really long time? What did you think it looks like? Joy in a face is still joy. And yesI've lost people and been amazed at how small they can seem, how fragile the skin. Facts of life.

This picture made me cry. It brought back the memory of seeing my mother under hospice earlier this year. She was in agony when I got there to see her three days before her death. Although comatose, she screamed when I lightly touched her hand.
I pray for the gentleman in the picture.

A trained animal to visit patients is a great idea and is certainly a pleasant diversion fior those who are lucid as well as for the families. The case of the dog staying by the child at a funeral is a sweet example. However, it can be sad for somebody who is reminded of a pet at home that the person cannot be with.

What an awful photo. I hope when I am very elderly and incapacited, no one prints a photo of me looking like that. Completely disrespectful to that gentleman. Shame on you.

totaly agree with you. Unless the person in the bed indicated it was alright. Frankly I would be ashamed of such. And yes I do and have worked in the industry for over 20 years now.

People who love you still want photos and it doesn't occur to them to throw a tarp over the old folks when a camera whips out. We don't see them as others do, I suppose, so it's kind of rude. I have always been less than photogenic. I hope there is no public outcry if I am photographed in the future.