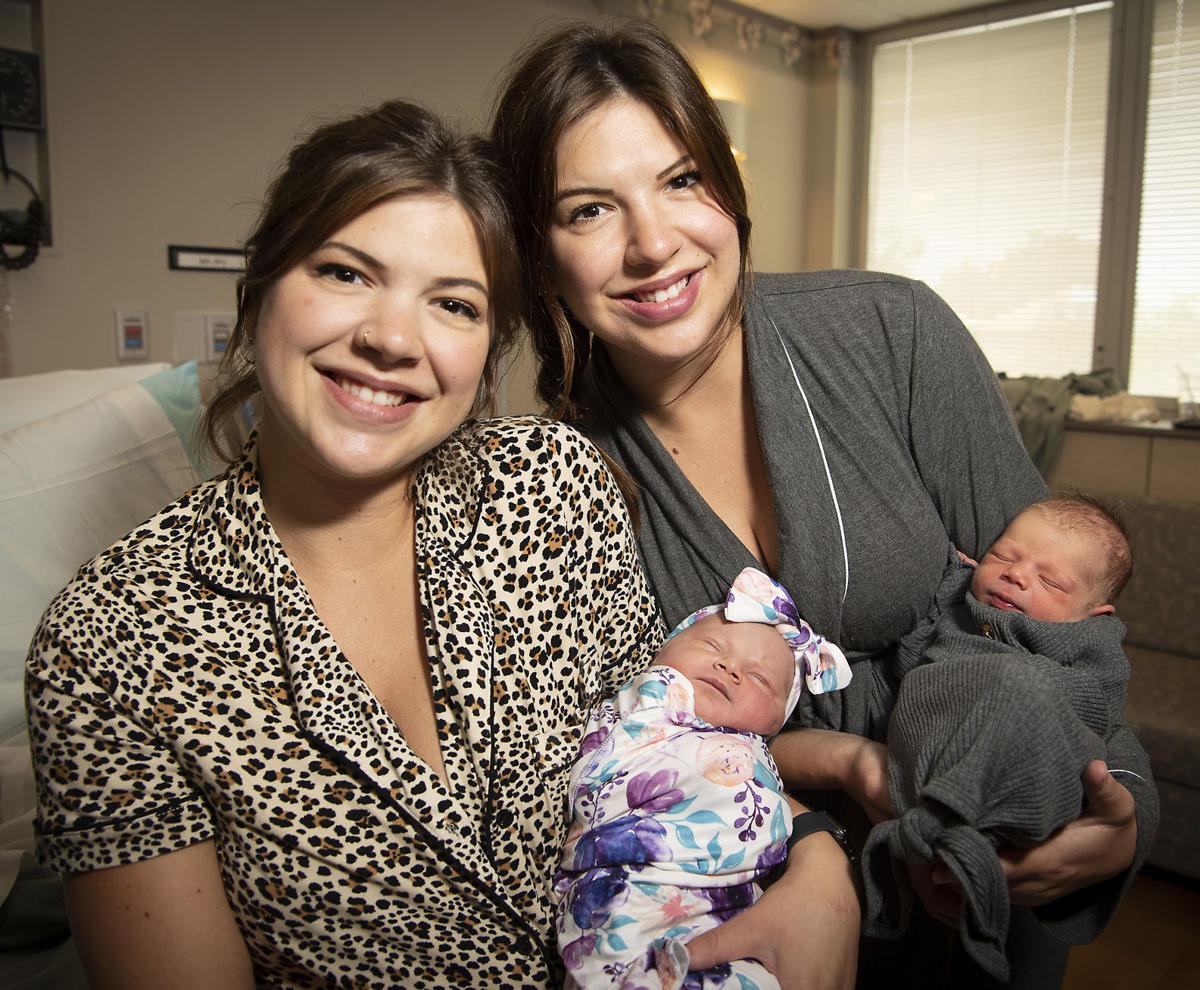 Identical twin sisters Amy Ash, left, and Katie Martin gave birth hours apart on Sunday at Frederick Health Birth Place. Ella Rae Ash was born at 8:10 p.m. while Hudson Bradley Martin was born at 10:15 a.m. The twins — the daughters of Billy and Laurie Winpigler — live near each other and work together as hair stylists in Frederick. 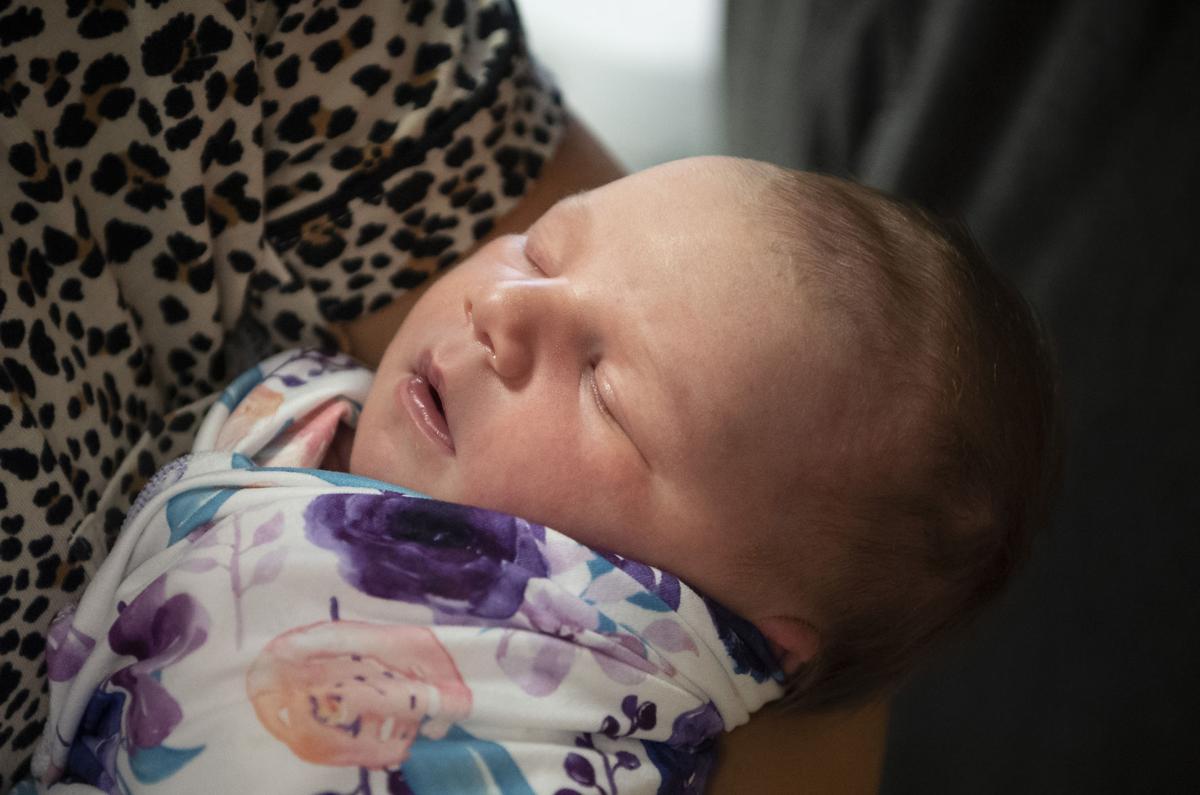 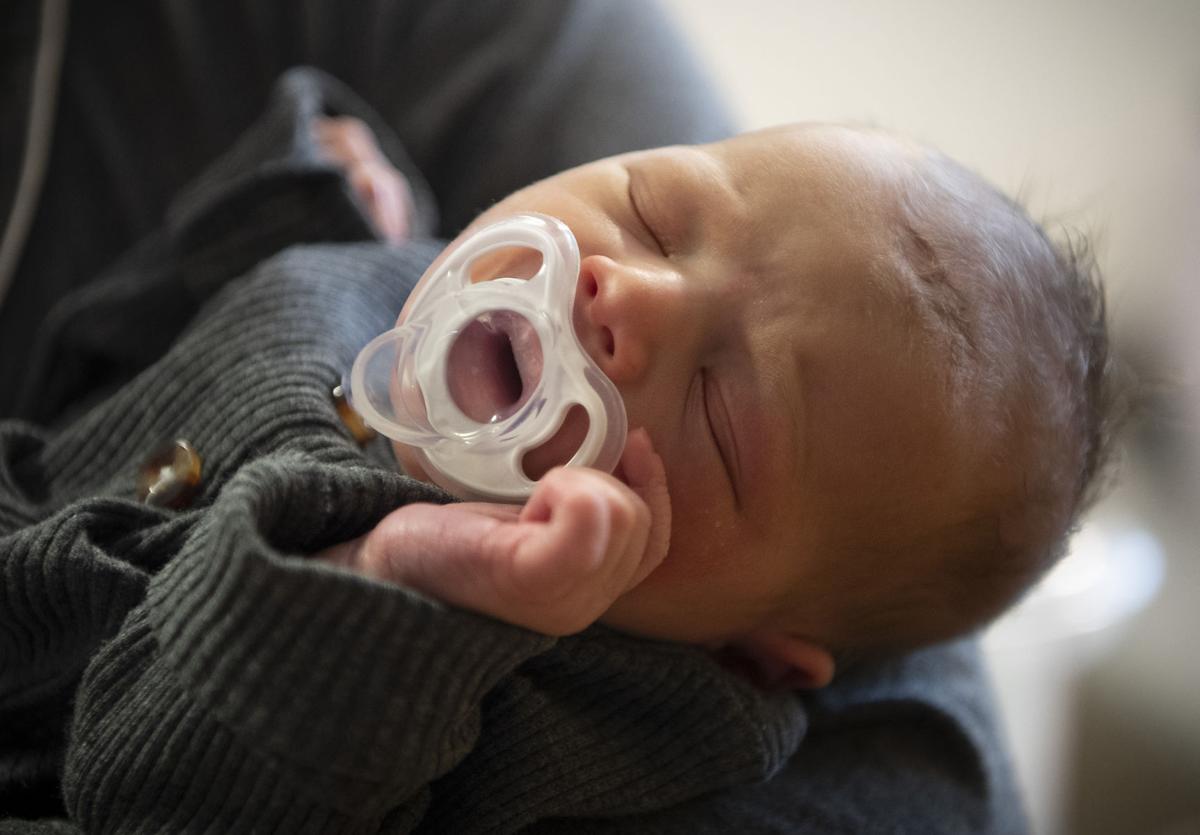 In a darkened room lit only by the sunlight streaming through its blinds, Ella Rae Ash slept soundly in her father’s arms, her chubby cheeks squished against his chest.

Just outside the door, Hudson Bradley Martin wiggled sleepily inside of a mobile bassinet, his tiny fingers curled around his dad’s index finger.

They had only been on Earth for about 24 hours — Hudson was born at 10:15 a.m. and Ella at 8:10 p.m. — but they had spent much of that time within a few feet of one another, right across the hallway of the Frederick Health Birth Place. And considering who their mothers are, that’s not likely to change anytime soon.

Moms Katie Martin and Amy Ash, the daughters of Billy and Laurie Winpigler of Frederick, are identical twin sisters who live 12 minutes away from each other. They also work together as hair stylists at East Patrick Street’s Belleza Hair and Nail Studio.

So, it seems like fate for newborns Hudson and Ella to be close.

“I think they’re going to act like siblings,” Martin said. She was cradling Hudson and standing beside her sister, who sat in her bed holding Ella.

“You know, like normal siblings,” Ash continued, nodding. She smiled. “Even though they’re not actually siblings.”

Hudson and Ella weren’t supposed to share the same birthday. Hudson’s mama was actually due on Friday, and Ella’s mom was scheduled to be induced at 5 p.m. on Sunday. But at around 8 p.m. on Saturday, Martin started having contractions. Twenty-four hours later, Ella joined her cousin in the world, her tiny head covered in dark, fuzzy hair.

Martin’s husband joked that the twin sisters had been planning all along for things to wind up as they did. Indeed, despite their due dates, Martin and Ash said they always suspected Hudson would arrive before Ella, falling right in line behind their moms (Martin is just a little bit older than Ash).

Since entering the world, the cousins haven’t had much time to get to know one another — they spent most of their first day asleep.

Their moms? Not so much.

Over the next few days, Martin and Ash said they’re most looking forward to bonding with their babies and falling into their new routines. Ash is also looking forward to having her 2-year-old daughter meet her new little sister. But at that moment, it was Ash’s turn to introduce herself to someone. She handed Ella off to her husband, who sat back down on the room’s couch, staring into his daughter’s face, utterly transfixed. Then, for the first time, Ash took her nephew into her arms.

I knew identical twins who married identical twins that they met at a twins festival. They all live in the same house and have kids. It seems odd, but it works for them.

Congratulations to the new moms and dads!

Here is the proof there is NO NEWS in the FNP. This story is the main story, above the fold, on page 1. FNP must be in identity crisis wanting to be Frederick Magazine.

I agree, AOC. And I'm getting pretty tired of seeing the same old stories for days on end, particularly over the weekends. If they can't come up with new local stories every day, there's plenty on national news they could be printing.

or underreporting on National news like when President Biden signed all those executive orders on the 16th (a late Friday afternoon).