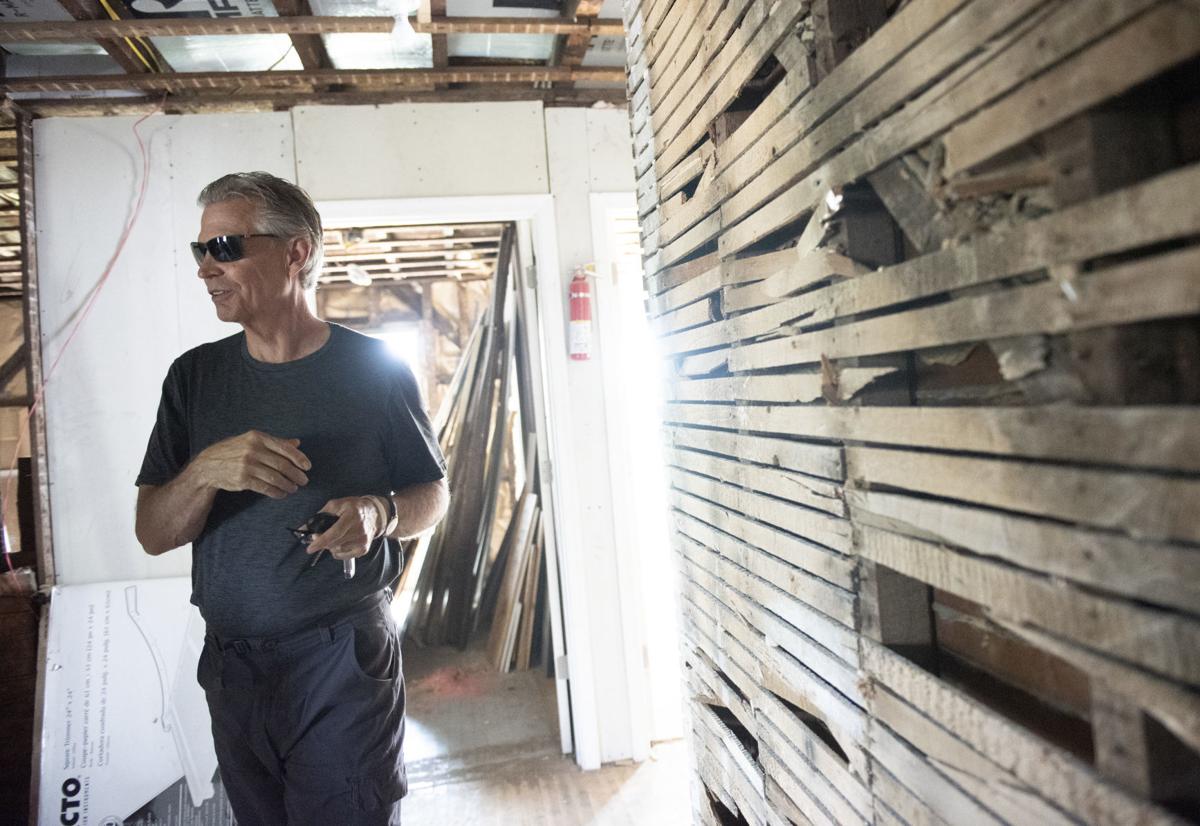 Joe Tarasuk gives a tour of a building being rehabilitated in Ijamsville to serve as housing for those recovering from substance abuse. 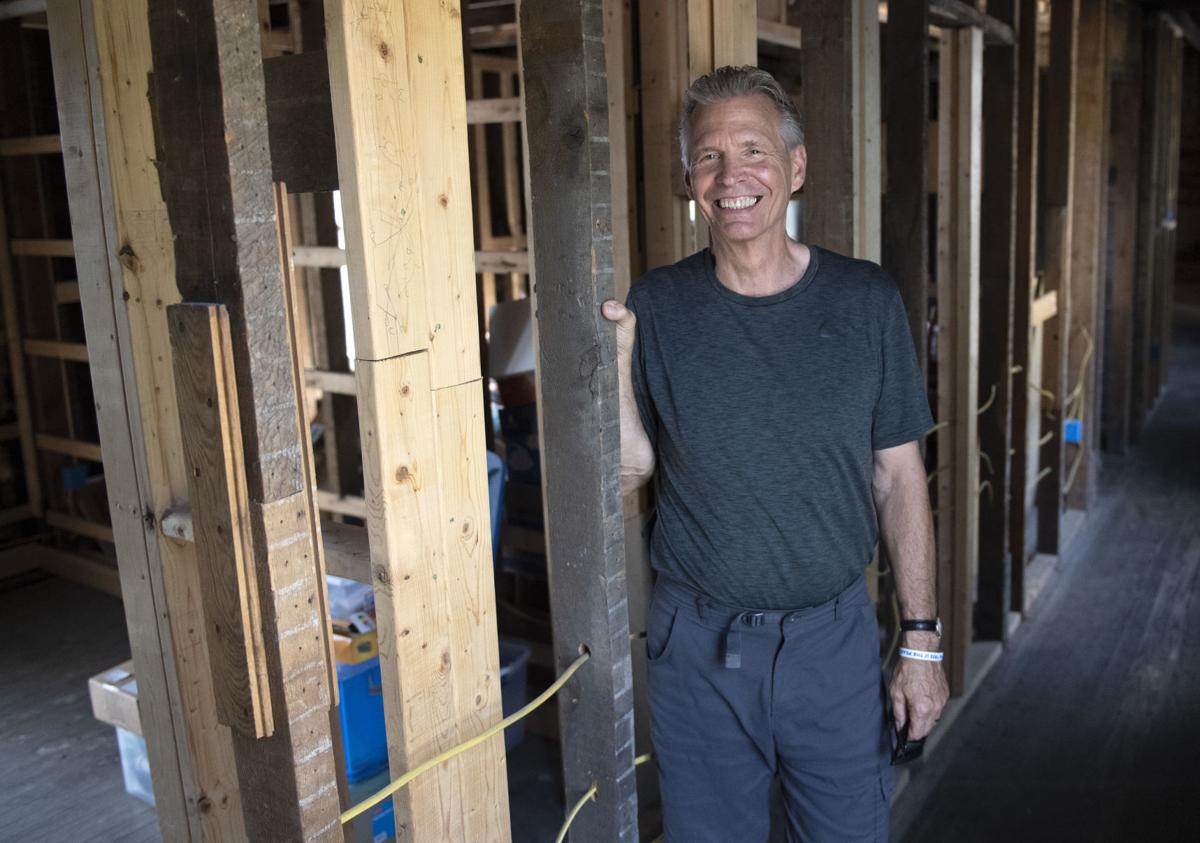 Joe Tarasuk is shown in a building being rehabilitated in Ijamsville to serve as housing for those recovering from substance abuse.

Joe Tarasuk gives a tour of a building being rehabilitated in Ijamsville to serve as housing for those recovering from substance abuse.

Joe Tarasuk is shown in a building being rehabilitated in Ijamsville to serve as housing for those recovering from substance abuse.

Dust covered most of the floorboards, highlighted by light coming through windows that looked out to the backyard at CrossRoads Freedom Center. Insulation could be seen where the walls and ceiling met.

Nearby, Joe Tarasuk stood among the wooden beams, in a room that was once part of the Riggs Center, a sanatorium. After that, it was a residence, but it eventually fell into shambles.

Tarasuk saw the opportunity, and he and his wife opened a recovery center there four years ago.

Now, he has his eyes on expanding.

He has been able to offer eight beds for men, who are housed in a different part of the building. All that had to be renovated to bring it to where it is now, he said.

He wants to bring eight more beds, then nine more to CrossRoads. Once finished, the rooms will house one or two men.

The first step to remodel 20 rooms is getting the building up to county code, which means getting a sprinkler system in place, he said. The building will need to be rezoned from a small recovery center to a large one.

“We’re kind of in a Catch-22. Building the recovery center so it’s affordable for guys in recovery is very hard,” he said.

Right now, the full-time employees are Tarasuk, his wife, Maria, and another person. He often relies on volunteers for help redoing the buildings. His wife cooks the meals, although Tarasuk said he hopes to redo the kitchen and open a culinary class for the men in the recovery program.

He has gotten state grants to help with the costs, but he is actively raising money. On Oct. 5, CrossRoads Freedom Center will hold a pig roast and chili cookoff fundraiser, with proceeds going to the recovery organization.

There will be yard games, music and testimony, in addition to the pig roast and chili cookoff. More importantly, the day will give the community a chance to learn more about CrossRoads, he said.

CrossRoads has operated for about four years, although Tarasuk has owned the building for 10. It took about six years for him to open the current operations, he said.

“From where it was and where it is, it’s night and day,” he said.

The one-year program has had about 11 or 12 men finish, he said. Some finish in a year; others need a little more time.

Tarasuk is personally connected to becoming free from substance use, he said — his first wife died of an overdose, and he went through recovery himself.

“There’s a difference between being clean and free,” he said.

The men who come to his program, which has a religious focus, should be clean, he said. The program does conduct drug tests on participants, but CrossRoads offers detox services.

Frederick County is working to partner and open a detox center at the work-release site on Marcies Choice Lane near Md. 85. Renovations to make that happen should begin in the next few weeks.

But that still won’t be enough.

More recovery beds are needed in the county, said Jonathan Switzer, co-organizer of Frederick County Goes Purple, a monthlong grassroots effort to advance the conversation about opioids in the county that began Saturday.

One thing that makes CrossRoads stand out is the integration of jobs, Switzer said. All the men in the program should have a job as they go through recovery, Tarasuk said.

Having multiple organizations offer recovery services gives more options to those working through substance abuse, which is important, Switzer said.

“Whenever you make a choice, it increases the sense of personal dignity and freedom in the process,” he said. “And, so for those that are entering recovery, I think it is meaningful that they can have some really legitimate choices ahead of them.”

Boyd Hemp has battled depression for much of his life, and at a young age was abandoned by his family.

Maybe I missed it, but are any of the men in the program helping out with the renovation?

This is wonderful work.

o Too bad these kinds of initiatives seem only to be lead by non-profits with minimal resources instead of government resources, who by the way, are in large part responsible for initiating and approving the excessive use of prescription opioids (Pharma now in bankruptcy) that has driven the problem since the mid-1990’s..

o Medical facilities are now prescribing fentanyl for non-life-threatening, minor injuries both both adults and children - really! There are safer alternatives that do not introduce opioids to people.

The photo-op seeking sheriff does such a good job at keeping drug pushers out of FrCo that there is no end to the number of abuse centers needed. But why do we need these centers? Why can't the druggies recover at home? Or better, put the beds in the sheriff's office.

So how do these comments bring any true solutions? We need centers because people can change, and do change. I’m sure you know this. I hope your not in need and no one is there for you. I’m thankful for those who have given there lives to help and serve those who messed up, but want better.

Comments don't offer solutions, they more often reveal what we don't know. For instance, my thought on FCPS' comment was, "they can't stay in recovery at home, they have to be away from whatever that environment is." Commenting that doesn't solve anything. Comments add information, they're not vetted, just something to consider. I respect your passion. Reading things in a newspaper feels impersonal, hence some of the comments, until it isn't. Then God help us. God bless.

14. Learn about German heritage at Oktoberfest