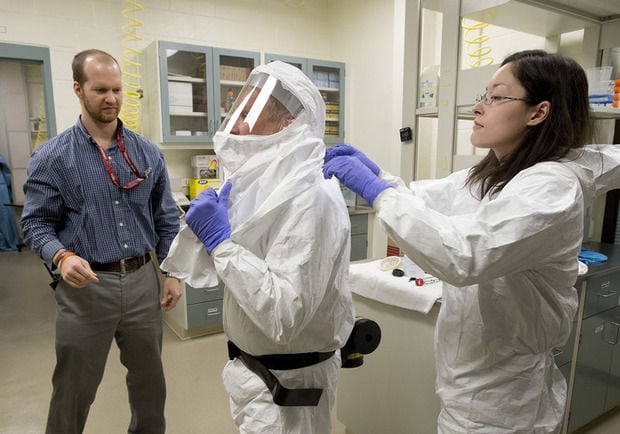 Frederick News-Post reporter Sylvia Carignan, right, helps Dr. Randal Schoepp, chief of the Applied Diagnostics Branch at the U.S. Army Medical Research Institute of Infectious Diseases at Fort Detrick, put on the respirator hood of his suit. For safety, workers wearing the suits work in pairs to get into and out of the protective gear. At left is USAMRIID Biosafety Officer Dr. David Harbourt. 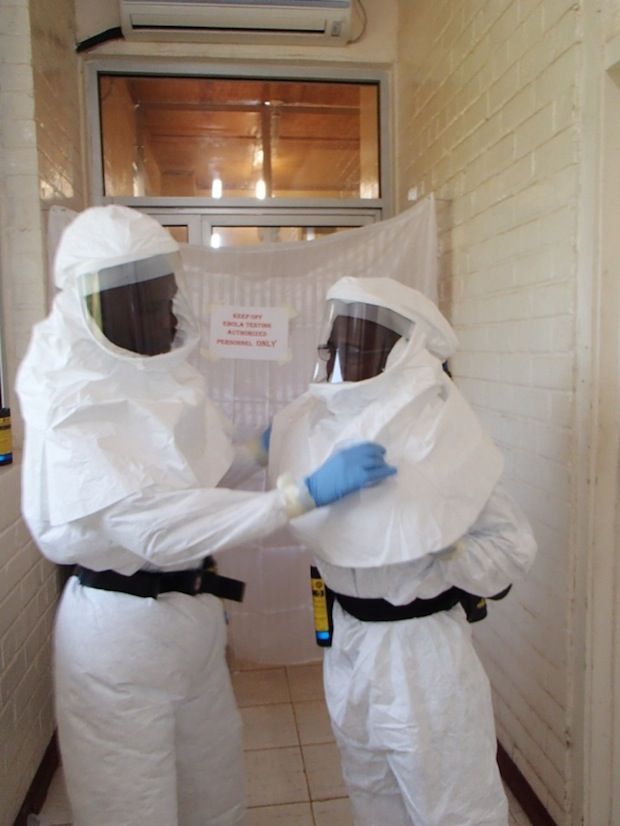 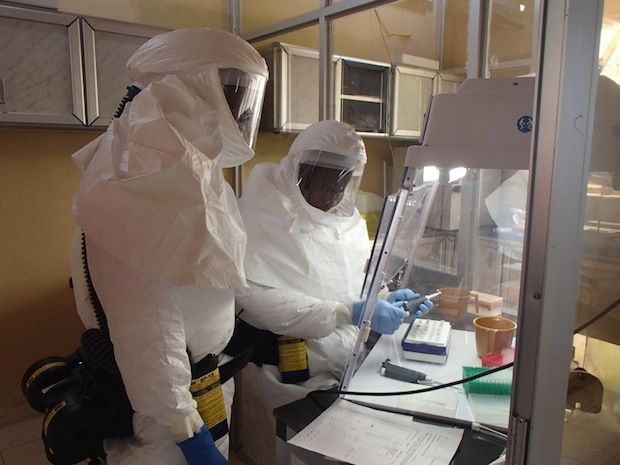 Technician sets up PCR assay for Ebola within containment laboratory. Assay components are assembled in PCR hood to prevent any contamination that could interfere with testing results.

Frederick News-Post reporter Sylvia Carignan, right, helps Dr. Randal Schoepp, chief of the Applied Diagnostics Branch at the U.S. Army Medical Research Institute of Infectious Diseases at Fort Detrick, put on the respirator hood of his suit. For safety, workers wearing the suits work in pairs to get into and out of the protective gear. At left is USAMRIID Biosafety Officer Dr. David Harbourt.

Technician sets up PCR assay for Ebola within containment laboratory. Assay components are assembled in PCR hood to prevent any contamination that could interfere with testing results.

In West Africa, the wall between a researcher and an Ebola infection is three layers of gloves, a Tyvek suit, a few feet of duct tape, an air purifier and a lot of bleach.

It only takes a second to breach that wall.

Dr. Randal Schoepp, chief of the Applied Diagnostics Branch at the U.S. Army Medical Research Institute of Infectious Diseases at Fort Detrick, said letting your guard down around Ebola can have deadly consequences.

A needle prick, loose glove or torn suit can contribute to an exposure, but forgetting a step in the equipment donning or doffing process can have the same effect.

“Some of the most critical times are when you’re taking off that PPE," Schoepp said, referring to personal protective equipment. The requirements vary for researchers and physicians who wear the equipment to protect themselves from Ebola.

In a lab setting, the Centers for Disease and Prevention recommends the most stringent safety standards possible for handling Ebola. But in a clinical environment, like hospitals and the National Institutes of Health’s containment unit, the requirements are not as strict.

Schoepp said he’d rather work in a lab than a hospital.

“In a lab, I know exactly what to expect,” he said.

LIBR is the Liberia Institute for Biomedical Research, where Schoepp has done work on Ebola for USAMRIID.

He and other USAMRIID researchers there are working to verify Ebola cases with blood samples and help identify others who might be infected.

“This is where USAMRIID shines,” Schoepp said. “This is what we’ve always done.”

There are no glass containers in the Liberian lab, and researchers don’t have to worry about cleaning up patients’ bodily fluids.

“People who work in the laboratories ... are so much at a better advantage,” he said.

The Biosafety Level (BSL) 4 classification is the highest possible safety standard for biological research. Labs that hold this classification are equipped for researchers to handle diseases such as Ebola that are frequently fatal and have no vaccine, according to the Centers for Disease Control and Prevention.

The CDC recommends Ebola be handled at BSL-4 in the lab and at BSL-2 in clinical settings.

In BSL-4, researchers wear a one-piece, rubber suit that covers the entire body. Air flows into the suit via long, skinny tubes, often hanging from the room’s ceiling, that are connected to a filtering system built into the lab itself. The positive air pressure inside the suit and the negative air pressure in the lab are a safety precaution that keep airborne viruses or agents from leaving the room.

The BSL-2 classification is set for work involving agents that are “moderate hazards” to people and the environment, which includes diseases transmitted via blood, like human immunodeficiency virus, and bacteria such as salmonella.

At the National Institutes of Health in Bethesda, where two Ebola-exposed patients have been treated, Clinical Center staff wear a Tyvek suit, shoe covers, battery-powered respirators, gloves and gowns. The protective equipment at the Liberian lab is about the same.

USAMRIID and the CDC had disparate explanations for the difference between lab and clinical protection levels.

According to the CDC, that difference exists because labs grow large volumes of the virus.

“The practice of BSL-4 containment is a direct result of the risk assessment associated with work involving large volumes of concentrated virus,” CDC spokeswoman Salina Smith said in an email.

USAMRIID Biosafety Officer Dr. David Harbourt said the reason the CDC asks researchers to handle Ebola at BSL-4 is because it is logistically possible in a lab.

“You could not do it outside of a highly controlled, highly specialized facility,” he said.

Hospitals in West Africa are generally not as well-equipped, and most use generators, Schoepp said. At the Liberian lab, they turn on the air conditioning in the rooms and hallways outside the labs to attempt to create negative air pressure inside the labs.

Physicians in West African hospitals and in the Liberian lab attempt to make up for those shortcomings by using protective equipment and enforcing safety procedures.

“It’s the training that we get here that makes the work there possible,” Schoepp said.

USAMRIID staff trained members of the 101st Air Assault Division in Kentucky in October before they were sent to West Africa to help build clinics and assist with patients at existing health facilities. They learned how to don and doff personal protective equipment.

In March, when Schoepp first went to West Africa to help handle the Ebola outbreak, Liberians were in denial.

“Nobody wanted to believe it was Ebola,” he said.

The World Health Organization said clinics in West Africa were not prepared to handle the infectious disease when the outbreak started.

“We had people — health workers in little clinics — using clear plastic bags on their hands for protection in many cases because nothing else was available. It’s a different part of the world,” WHO spokesman Daniel Epstein said in an email.

As the months wore on and Schoepp left and returned to Liberia, he said the culture changed: People started wearing T-shirts that said, “Ebola is real,” and information about the virus popped up in advertisements.

“I saw a greater acceptance in the population that Ebola is a concern that each and every one of them has to deal with,” he said.

The number of cases the LIBR lab handles hit a peak in late September. At that point, it was testing 80 to 100 samples a day. After Schoepp left Liberia in late October, it handled 15 to 20 samples a day.

Many of those samples are from hospital patients who have been treated for Ebola. Physicians send their patients’ samples to the lab to verify that they are free of the virus.

Now, the Liberian lab’s personnel are spending more of their time identifying contacts in an infected patient’s network.

“To get this outbreak, or any outbreak, under control, the biggest thing is contact tracing,” he said.

Schoepp has traveled to West Africa multiple times since since 2006 to conduct research on infectious diseases such as Lassa fever, which is similar to Ebola.

He said he is often asked why he returns to the epicenter of the world’s largest Ebola outbreak. Schoepp sees it as a once-in-a-lifetime opportunity.

“I spent my entire career training to do this,” he said.

He will return to Liberia in late January. He said he does not expect the outbreak to end in the next few months, despite the slowdown in new Ebola cases.

“It lulls you into complacency,” he said, “and roars back with a vengeance.”

The CDC has recently updated its guidelines for the use of personal protective equipment in an Ebola outbreak. The key points are:

n All health care workers involved in the care of Ebola patients must have received repeated training and demonstrate competency in protective procedures before working with Ebola patients.

n Health care workers caring for Ebola patients must not have skin exposed while in protective equipment.

n An onsite manager must oversee the care of Ebola patients in a facility.

n A trained observer must observe each step of every personal protective equipment donning and doffing procedure to ensure protocols are followed.

He will return to Liberia in late January. He said he does not expect the outbreak to end in the next few months, despite the slowdown in new Ebola cases.

Really. Maybe you should stay here. Better for the Liberians who have suffered enough already.

I guess I'll know if I'm right if I come down with Ebola.

Why doesn't Fort Detrick have a vaccine for Ebola yet since defense is their only objective. Twenty-five years should be enough time.

It was there in 1989 that experts identified the deadly Ebola virus in a monkey imported to the area from the Philippines.