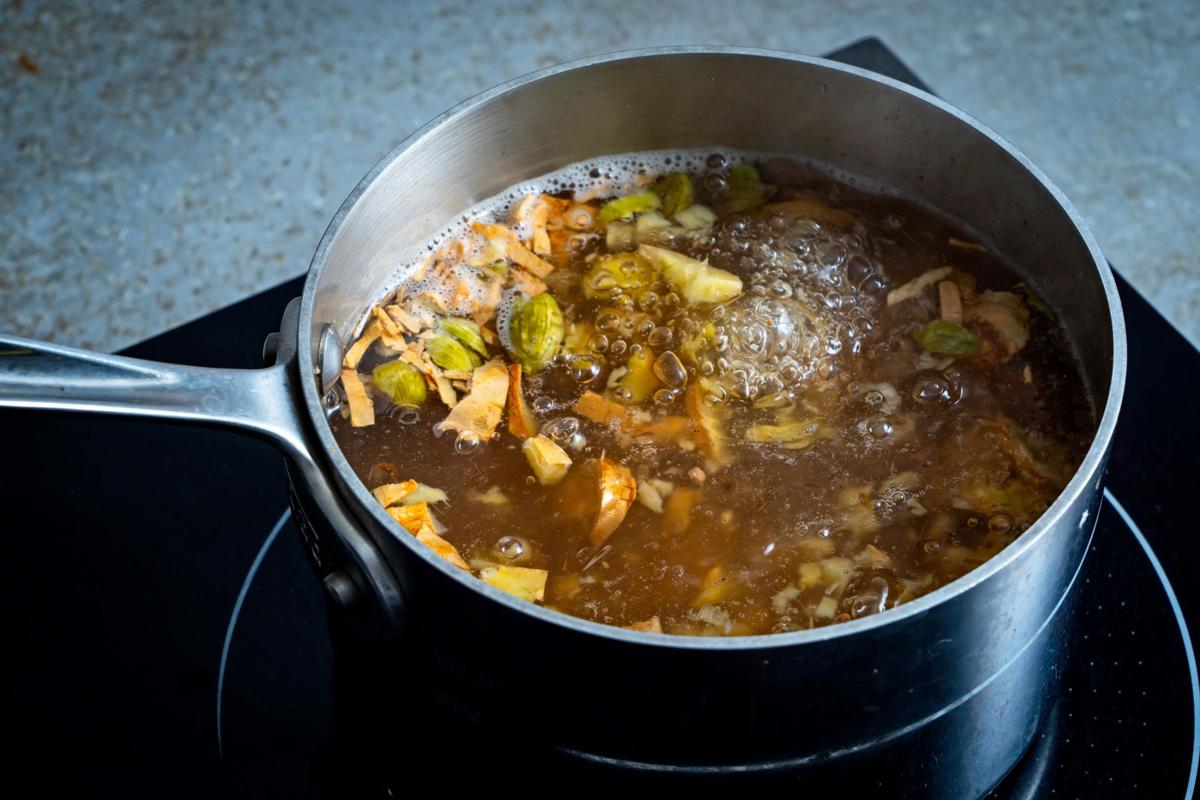 Spices are simmered to make shaah. 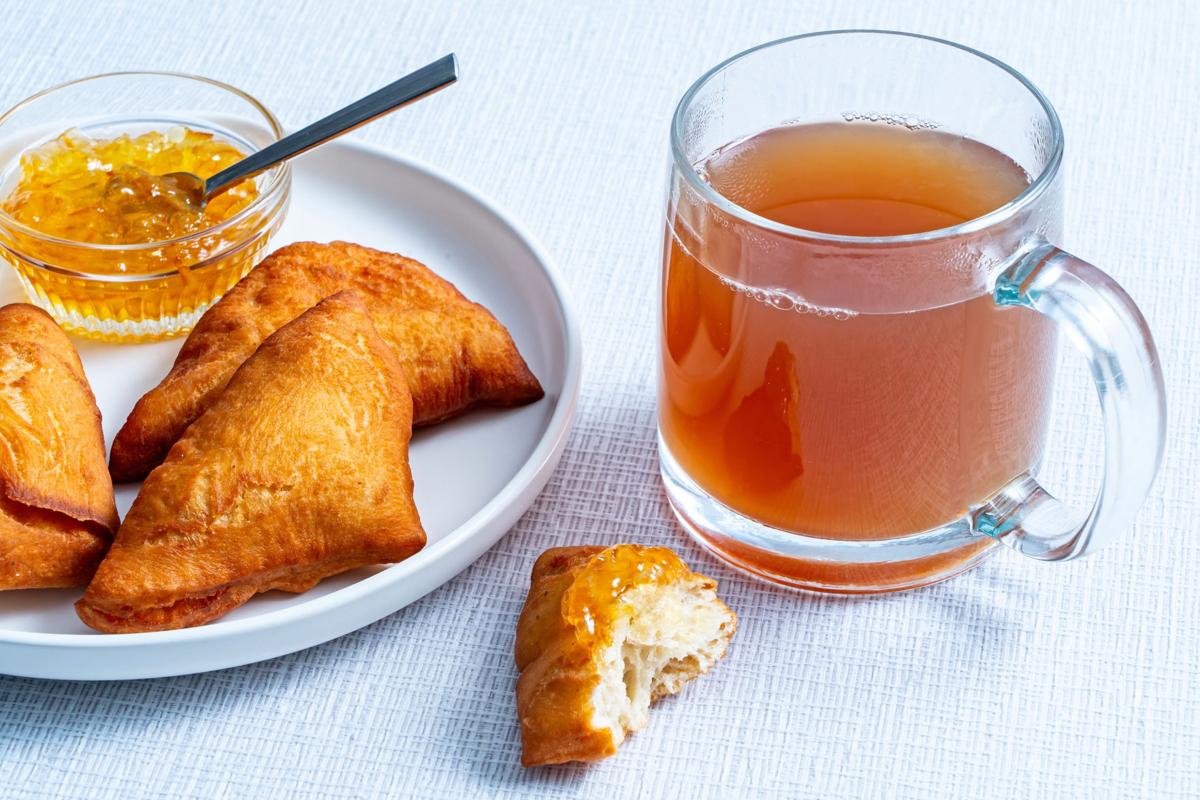 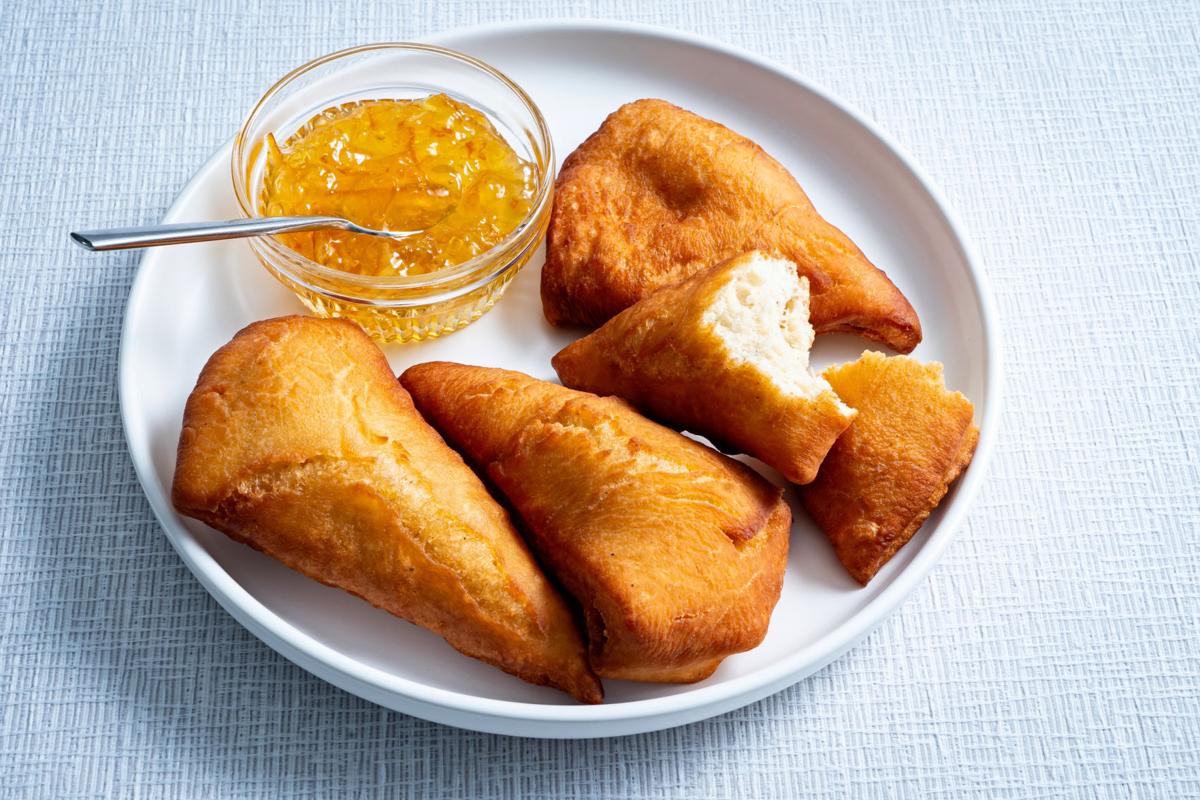 Spices are simmered to make shaah.

There’s a magical time of the day when the afternoon sun hits its climax and bathes everything in warm rays of light. During these golden hours, whether I am in Seattle or Somalia, I have a ritual of resting and taking my casariyo.

My hands move with memory. Every day, I carefully brew ginger-laced, spiced Somali shaah and arrange my sweet of the day: moist and dark slices of date cake, a paper-thin stack of tender malawax (a cardamom crepe), or still-warm pieces of fresh bur (a fried beignet). I plate my food carefully, consume my sweets slowly and let my shaah soothe me. No matter what my day may bring, I know that I have casariyo to look forward to.

In Somalia and throughout the diaspora, there is the tradition of casariyo (A-sar-iyo), an afternoon tea or coffee break that follows lunch and the Asr Islamic prayer. Some also take a nap before or after their casariyo. It’s a time of the day where everything slows down before coming to a stop, like the final droplets of honey settling at the bottom of a cup. Casariyo encourages time to rest, nourish oneself and connect with others over a warm drink and a bite of something sweet.

In contrast, despite coffee’s initial high cost, the modern “coffee break” is primarily associated with both work and the working class. Coffee has been around for thousands of years, having first been discovered by a goat herder in modern-day Ethiopia. This powerful and aromatic drink found global popularity along Arab trade routes.

The origin of the American worker’s coffee break can be traced to Buffalo in the late 19th century, where bosses at either the Barcolo Manufacturing Company or the Larkin Company introduced it to their workers as a way to increase employee productivity and output.

Today, a tea or coffee break tradition can be found in many cultures and across societal class lines; whether it’s the Somali casariyo or the Swedish fika. So much more than a brief work break, these traditions prioritize rest and bake it into the rhythms of the day. They are a daily reminder of how fundamental food, rest and connecting with others are to the human experience.

During my time in Mogadishu, every afternoon was marked by casariyo. In the villa, we took casariyo on the balcony where we had all of our meals. On occasion, my mother would take her casariyo in the courtyard, where she looked like the definition of grace. Her relaxed state could be seen in the way her bright garbasaar draped itself over her shoulders. Her feet, covered in bold red henna, outstretched before her on the stone bench as she sat nursing a cup of shaah in one hand, basking in the sun and resting for a time.

My aunt would bring out all the classic casariyo treats: fluffy slices of Somali cake similar to angel food cake; sticky and thick cuts of xalwo (halwa) gleaming a fierce orange-red, sugar-coated ridges of shushumow and buttery crisp Somali cookies bursting with cinnamon and cardamom — handmade fresh into the shape of flowers.

Accompanying the food were trays carrying thermoses of qahwo (coffee) and freshly made spiced Somali shaah. Alongside the Somali coffee and tea were pitchers of camel, goat and cow milks. We would take turns praying outside in the warm sun as each person fixed themselves a cup of tea and a plate of sweets.

People would slowly wander from out of the house to join us or to make wudhu (ritual cleansing) in our outdoor bathroom. Occasionally, neighbors would knock on our door or children from the neighborhood would ask my cousins to come and play. Casariyo always felt like more than just a break in the day. It was a continuation of tradition; I could imagine my nomadic ancestors taking pause in their day to set up camp, tell jokes and talk politics over shaah.

When I think about rest, I think about Somalia and my mother glowing under the sun’s warm rays. I think about the spread of casariyo treats and the taste of hot shaah at the peak heat of the afternoon.

It took living in a place where work is glamorized and rest is discouraged for me to appreciate casariyo. To understand that slowing down is just as valuable for the human spirit as producing something. Sometimes rest looks like pausing for rich conversation alongside a cup of spiced tea and a slice of cardamom cake.

Casariyo is a tradition that anyone can appreciate, because everyone is deserving of rest.

Bur is a sweet fried bread or doughnut similar to a beignet. It is eaten in Somalia but also throughout East Africa, and is a popular street food and a home snack. In neighboring countries it is known as mandazi or mahamri, depending on its preparation. Bur is often eaten during Ramadan, alongside the Somali sambuus (fried dumplings). Sometimes, bur is split in half, the sambuus is placed inside and they are eaten together in a sweet-and-salty combo. Bur is also often served with a cup of shaah (Somali chai) during the afternoon tea (casariyo).

The recipe is easily doubled; you can tightly wrap the other half and freeze it for up to 1 month. Defrost in the refrigerator overnight and let come to room temperature before frying.

Storage Notes: Bur is best the day it's made, but can be refrigerated for up to 2 days, and reheated in the microwave in 10-second bursts until warm.

1 1/2 teaspoons powdered milk, such as the Nido brand (optional)

Vegetable oil, for greasing the bowl and dough, and frying

In a large bowl, whisk together the water, sugar and yeast until combined. Add the flour, egg, powdered milk, if using, salt, cardamom and cinnamon to the yeast-water mixture, and mix with a wooden spoon until a shaggy dough forms. Start kneading the dough, adding more flour, as needed, until a slightly tacky but mostly smooth dough comes together, 5 to 6 minutes. Lightly brush a large bowl with the oil, then rub more oil all over the dough. Transfer the dough to the bowl, cover with a tea towel or a large plate and set in a warm place. Let the dough rise until doubled in size, about 1 to 2 hours - focus more on the size of the dough rather than the time.

Divide the dough in half - each piece should weigh about 225 grams. Cover one half with a damp tea towel while you work.

While the oil is heating up, line a large, rimmed baking sheet with paper towels or wire rack and set it near your workspace. Generously flour your workspace and rolling pin. Roll out one of the dough balls on the floured surface until it's about 10 inches wide and about 1/2 inch thick. Using a pizza cutter or sharp paring knife, cut the circle into quarters, then cut each quarter in half or thirds, depending on if you want to wind up with 8 or 12 pieces of bur. Repeat with the other ball of dough.

Working in batches of 4 to 6, so as to not drop the oil temperature by too much, add the dough to the skillet and fry until golden, 30 seconds to 1 minute. Turn the pieces over and fry until golden, another 30 seconds to 1 minute. Transfer the fried bur to the prepared baking sheet and repeat with the remaining dough pieces. As you continue to fry, adjust the heat as needed to maintain the frying temperature.

Let the bur cool until warm to the touch, then serve warm.

This analysis is an estimate based on available ingredients and this preparation. It should not substitute for a dietitian's or nutritionist's advice.

Shaah, a spiced black chai made throughout Somalia, is an important part of Somali cuisine and culture. It's a cousin of Yemeni, Kenyan and Indian chais, and it's found across the Somali diaspora.

It differs from other chais in that it often omits black pepper, and the milk is added after instead of during the cooking process. But each family has their own recipe for it. Shaah with milk is called "shaah cadays"; without it is "shaah rinji" or "shaah bigays." It is served throughout the day, particularly during casariyo, the Somali afternoon tea break.

Many Somalis traditionally prefer a cup of shaah on the sweeter side; you may want to add less sugar. You can adjust the amount of ginger, as well.

Shaah is traditionally served with bur, a fried, sweet doughnut.

Storage: Leftover shaah can be refrigerated in a lidded container for up to 1 day.

Powdered milk, such as Nestle Nido brand, or fresh milk of choice (optional)

In a medium pot over medium-high heat, bring the water to a boil.

Slice the ginger root into 1/4-inch thick pieces. Working with a few pieces at a time, smash the ginger in a mortar and pestle until all pieces are smashed (you can also smash with a meat tenderizer or a kitchen mallet). Add the ginger to the water, followed by the sugar and tea, and bring to a boil.

Once the mixture comes to a boil, turn off the heat and let the tea steep on the burner for 10 to 15 minutes. Strain into cups and serve with milk of your choice, if desired.

This analysis is an estimate based on available ingredients and this preparation. It should not substitute for a dietitian's or nutritionist's advice.