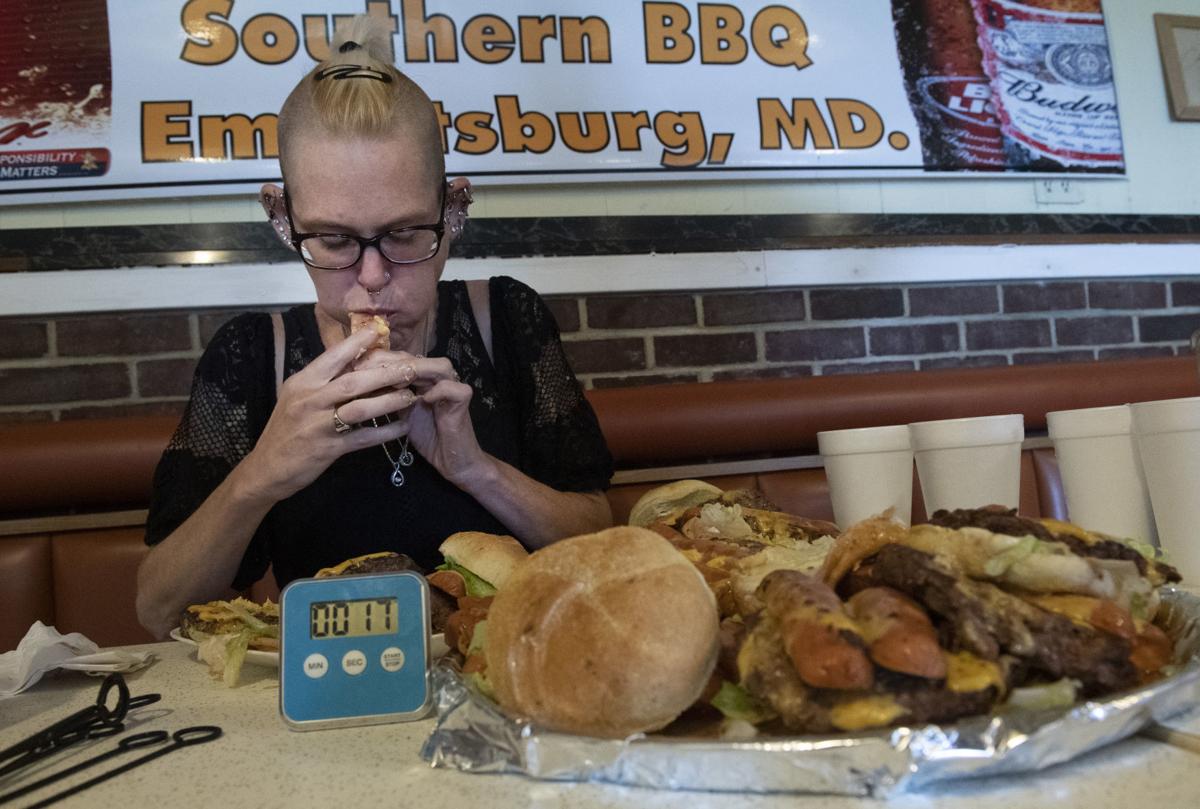 Molly Schuyler, a competitive eater, begins to consume four burgers consisting of a combined 16 burger patties and 16 hot links as a part of a double version of the Chubby’s Avalanche Challenge, which requires finishing in less than an hour. Schuyler completed the challenge in 29 minutes, 1 second. 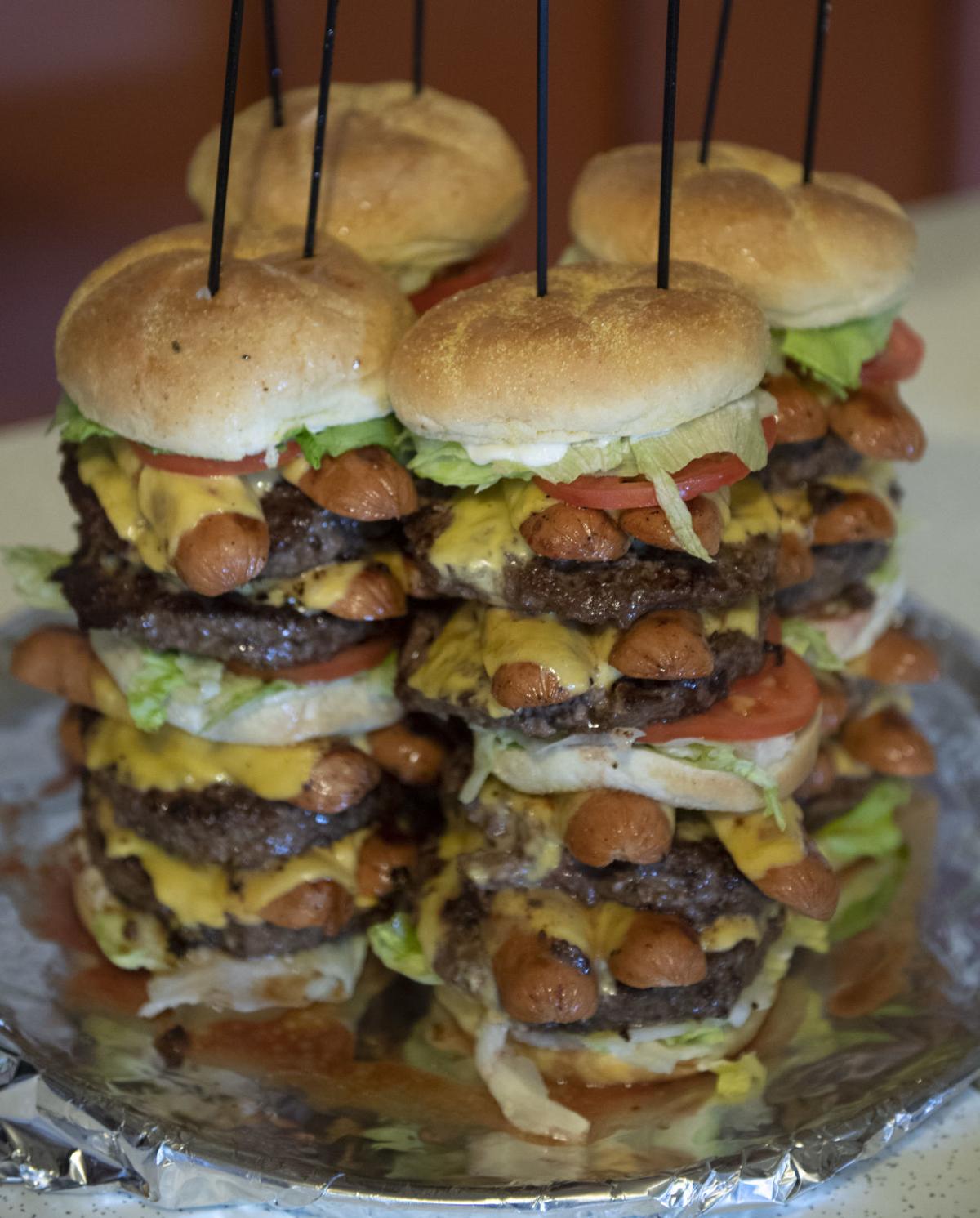 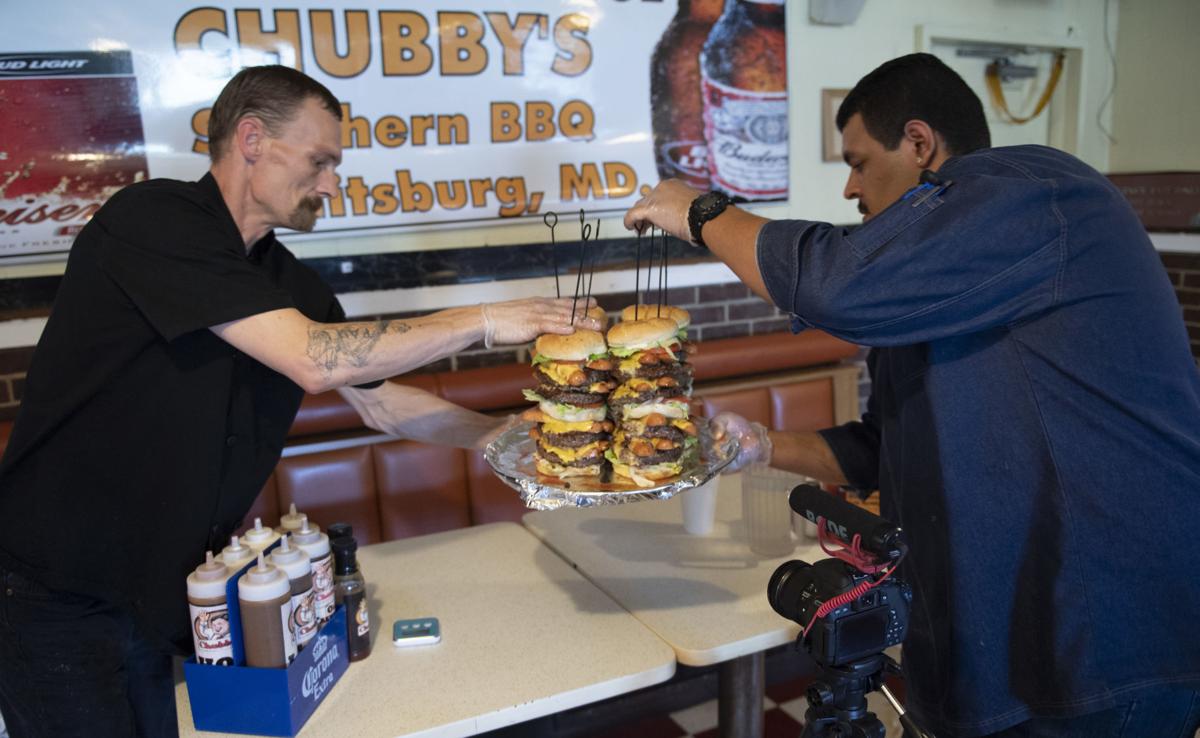 Paris Perez, right, pit master at Chubby’s Southern Style BBQ, and Paul Myers, a line cook, place four burgers down on a table as part of the Chubby’s Avalanch Challenge. Molly Schuyler, a competitive eater, ate all of it in 29 minutes, 1 second. 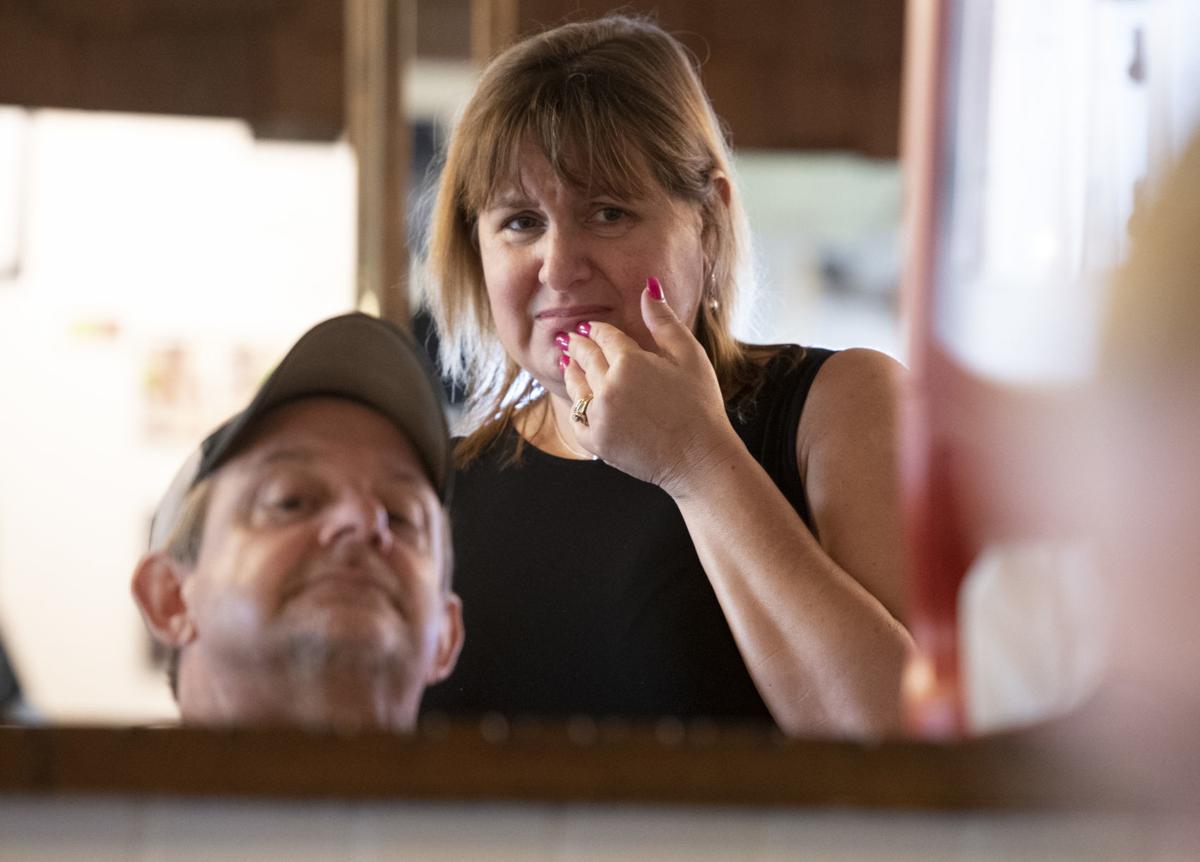 Molly Schuyler, a competitive eater, begins to consume four burgers consisting of a combined 16 burger patties and 16 hot links as a part of a double version of the Chubby’s Avalanche Challenge, which requires finishing in less than an hour. Schuyler completed the challenge in 29 minutes, 1 second.

Paris Perez, right, pit master at Chubby’s Southern Style BBQ, and Paul Myers, a line cook, place four burgers down on a table as part of the Chubby’s Avalanch Challenge. Molly Schuyler, a competitive eater, ate all of it in 29 minutes, 1 second.

Seconds before eating, Molly Schuyler sprinkled salt on all three of the plates in front of her. To her left were a pile of napkins, a water pitcher and multiple cups of diet coke with no ice.

Once the timer started she began shoving the sausage links into her mouth with hopes of finishing Chubby’s Avalanche Challenge in under 20 minutes.

The eating challenge is available at Chubby’s Southern Style Barbecue in Emmitsburg. The avalanche burger is served on a plate as two one-foot-tall stacks and consists of eight half-pound burgers, eight Louisiana hot link sausages, two slices of American cheese on each burger, lettuce and tomato.

If challengers finish the avalanche burger, about eight pounds of food, in one hour they get a $100 gift card to Chubby’s, a T-shirt and their photo on the wall. If they fail, they have to pay $60, according to Tom Caulfield, owner of Chubby’s.

Schuyler, a competitive eater who travels around the country participating in eating contests, visited Chubby’s Saturday to complete the challenge...only she was doubling it.

That’s 16 burgers, 16 hot link sausages and 32 slices of cheese, along with the buns, lettuce and tomato. Two cooks from the kitchen carried out the four foot-high stacks on a large round plate. After taking photos for her social media accounts, she spread the food out on three plates.

Caulfield pledged to give her $500 if she finished the burgers in one hour.

“I don’t see how a human does that,” he said. “But I think she’ll do it. I’m willing to pay to see a car-accident kind-of-thing.”

When asked how many calories are in an avalanche burger, Caulfield said “somewhere around a billion.”

“What are calories?” he joked. “This is a barbecue. Calories hopefully come in here and buy barbecue. I don’t know what they are. I wouldn’t want to know.”

He came up with Chubby’s Avalanche Challenge a few years ago after watching Man V. Food—a popular food show on T.V.

Schuyler competed in the Avalanche Challenge before, eating eight pounds of burgers in six minutes.

“She did the first one so fast that I was at my computer playing Texas Hold’em and I turned around and looked and the food was gone,” Caulfield said.

The 39-year-old competitive eater recently moved to Harwood, Maryland and got into competitive eating after someone asked her to do an eating challenge about seven years ago.

“I did it to prove a point and to say I can do it,” she said. “It snowballed into challenges, which went into contests.”

She now competes in food contests for a living, which allows her to travel around the country and only work weekends.

She usually prepares for a food challenges but lately she’s been going in unprepared.

“I guess if I wanted to be prepared I would drink a lot of water and stretch beforehand,” she said. “But when you’re not around your area or you’re driving and you’re tired and lethargic, lately, unfortunately i’m unprepared.”

During her move to Maryland, she drove across the country from California and is still unpacking her new home, while juggling four kids.

With her small frame, it’s natural to wonder how she can eat so much.

“I don’t do this every day,“ she said. “Honestly, I have four kids and at my house. This is not permitted.”

She hoped to do the (double) challenge under 20 minutes.

“Something like a six pounds or eight pounds, that’s easy,” she said. “I don’t care about my time, I just want to finish this because I don’t want to pay for it.”

During the challenge, customers who came in for lunch were in awe as they sat and watched from their tables. Others took photos.

Park knew Simmons was aware of Schuyler and wanted to surprise her by bringing her to watch.

“I wasn’t sure if she was going to be grossed out or she was going to enjoy it,” Park said of her daughter-in-law. “But she just informed me that she and my son watch these kinds of things on Youtube all the time.”

When Park saw the four stacks of burgers she didn’t think Schuyler could finish everything.

“I actually wasn’t sure [she could do it,]” Simmons said. “The amount of training and dedication it takes to get to that point is insane.”

The two women both agreed that seeing Schuyler eat in person exceeded their expectations. They didn’t lose their appetite over it either.

“I’ve never seen anything like it,” Park said. “I had to see it in person.”

After 29 minutes and one second, Schuyler finished off the 16 pounds of food with cheers from customers in the restaurant.

Five minutes after she finished she was asked how she felt.

“Fine,” she said. “I think we’re going to get something to eat.”

“More food?” she was asked.

What a disgusting person.

This girl is listed in Wikipedia: https://en.wikipedia.org/wiki/Molly_Schuyler

Formerly of Montevideo, Minnesota,[23] she currently lives in Bellevue, Nebraska.[24] She is married with four children.[3]

In June 2017, Molly visited Wards House of Prime in Milwaukee, WI and accomplished the feat of eating 360 ounces(22.5 lbs) of Ward's Famous Prime Rib in about 45 minutes...and wanted more![20]

In July 2017 she again won the corndog eating contest at the California State Fair in Sacramento, CA with a winning total of 37 corn dogs.

Molly Schuyler was named the winner of the July 27, 2017 episode of ABC's revived "The Gong Show." Her performance consisted of her eating six large deli containers full of cottage cheese in under 90 seconds.[21]

disgusting. hey, at least he accomplished something and can add it to his cv. top employers will be beating down his door!

Wrong pronouns. Take a closer look at the article.

simple mistake. and why? anyone that shoves 16lbs of beef down their pie hole is not making much of a contribution to anything - except obesity, heart disease, and punchlines to bad jokes.

Indeed, I was pointing out a simple mistake. That doesn't mean I disagree with your opinion. But why target the woman alone? Isn't Chubby's complicit in encouraging and incentivizing this behavior by offering the "challenge" in the first place?

Absolutely. She just happened to be the 'winner'. at least these places and events ensure the health care industry will remain busy.

this is such a sick "sport".

No respect for food!

Exactly, what is the point of this contest?