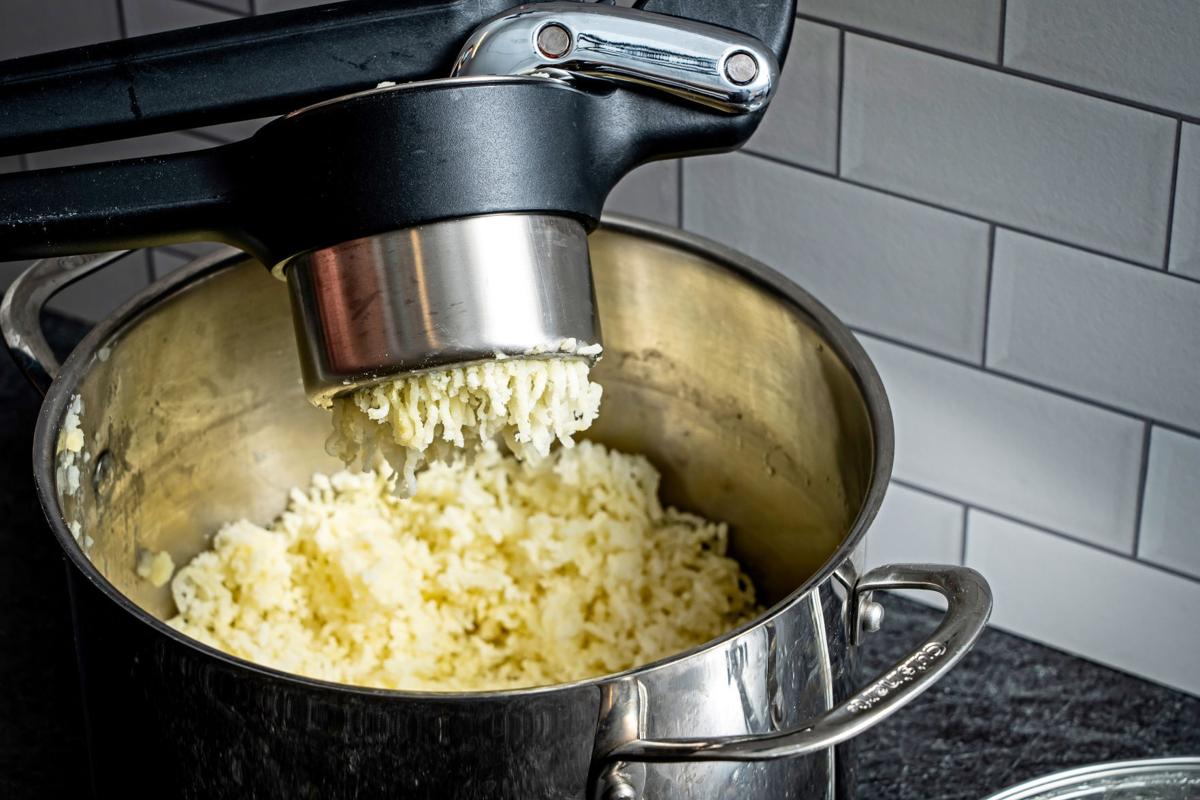 If fluffy is your desired texture, you want to be as gentle as possible with the cooked potatoes, to avoid the release of all that excess starch. 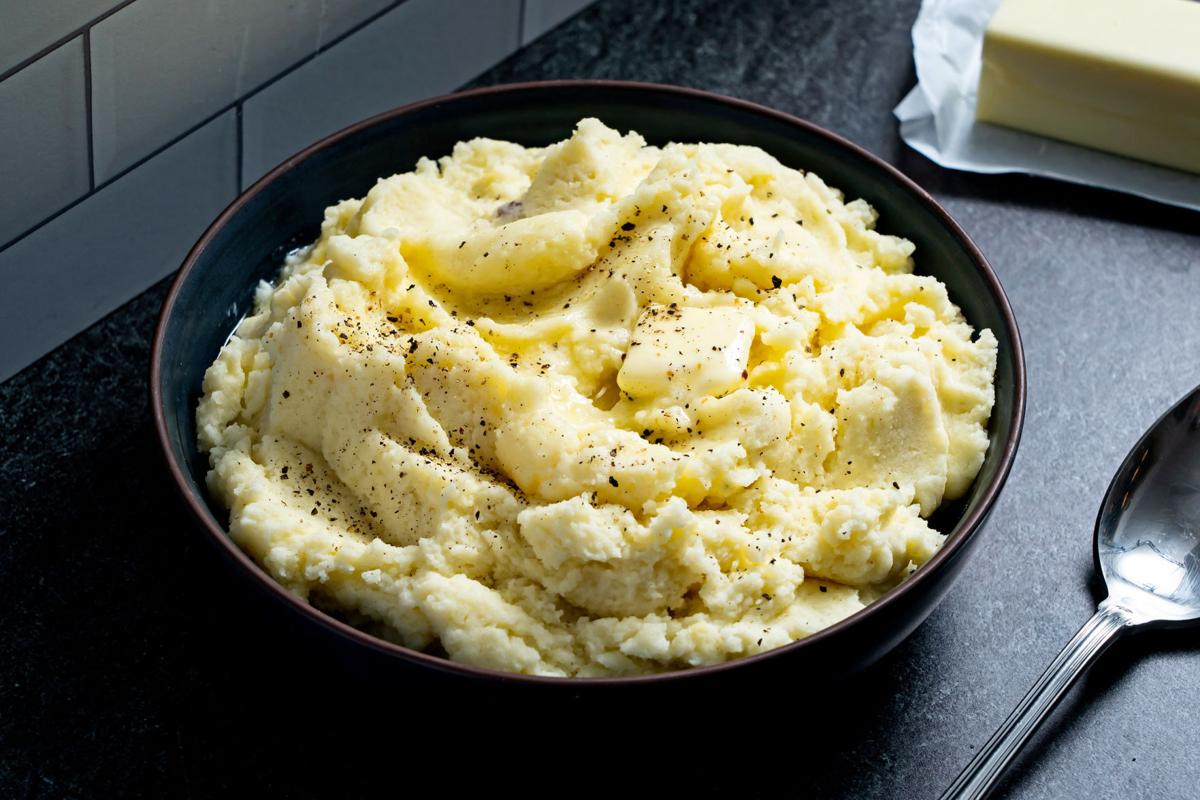 How to make better mashed potatoes — just the way you like them.

If fluffy is your desired texture, you want to be as gentle as possible with the cooked potatoes, to avoid the release of all that excess starch.

How to make better mashed potatoes — just the way you like them.

Family feuds have erupted over less trivial things than how to make mashed potatoes. Now, you may say mashed potatoes are, in fact, trivial, but I and plenty of other people would beg to differ — especially when it comes to which version gets served at Thanksgiving. (Raise your hand if you, too, have served multiple types to please various tastes.)

So, no, I am not going to take a side in your ongoing family dispute. What I am going to do is tell you how to tweak ingredients and techniques to achieve your — or your guests’ — ideal result.

Whether you want fluffy or creamy (or gluey — no judgment here), cheesy or garlicky or any other type of spud, here’s what you need to know about the different variables.

The potato you use is a primary factor in what your mashed potatoes will be like. Potatoes generally fall into two categories, Harold McGee says in “On Food and Cooking”: mealy and waxy, which correspond to high- and low-starch contents.

Russets are the most predominant mealy potato. When these types of potatoes are cooked, their high-starch, larger cells can absorb a lot of water and then separate from each other, creating a drier, fluffier texture, Shirley Corriher says in “CookWise: The Hows & Whys of Successful Cooking.” Waxy, low-starch potatoes, such as red and some white, won’t absorb as much water. Moreover, McGee says, their cells tend to stick together more, creating a “solid, dense, moist texture.” Low-starch potatoes generally need larger amounts of fat and more intensive mixing to form anything like a mash.

For something a little creamier than a Russet but not as dense as a red potato, you can go for a more in-between option, such as gold potatoes, notably the popular Yukon Gold. That’s my go-to. Such medium-starch varieties are best for a “dense, creamy mash,” J. Kenji López-Alt says in “The Food Lab: Better Cooking Through Science.”

Starch also plays a role in how mashing affects your, well, mash. The starch granules that absorb water during cooking are just waiting to burst and release starch molecules everywhere. The more vigorously they’re broken, the more starch is released, leading to gluey mashed potatoes — or, as Corriher puts it, “wallpaper paste.” If that’s your thing, then by all means, bust out the food processor or go to town with your potato masher.

If fluffy is your desired texture, you want to be as gentle as possible with the cooked potatoes, to avoid the release of all that excess starch. A ricer or food mill “will separate the cells with minimal shearing action to break up the starch,” López-Alt says. Using an electric mixer will release some starch, he says, but not as much as you would with the sharp food processor blade, so the end result is still on the creamy side.

There’s a very low-tech option, too, which is a wooden spoon. Using it to mash the potatoes is less likely to overwork the starch granules than a masher. If you like a little rusticity in your mashed potatoes, with some small pieces amid a relatively smooth mash, the spoon is the way to go.

Adding fat serves two main purposes in mashed potatoes: texture and flavor. In terms of texture, the fat helps separate and coat the mashed tubers. More fat yields a more luxurious result. At the higher end of the spectrum, there are such options as heavy cream and butter. If you’re looking for decadence, this is where you want to be. Half-and-half is a good middle ground, with some richness but not so much that it’s over-the-top to the point of masking the actual flavor of the potatoes. Milk will be on the leaner side, not a bad thing if you don’t have the stomach for the higher-fat options. I would, though, recommend sticking to whole or, at the very least, reduced-fat milk. Some sour cream folded into the mix can add fat and tangy flavor.

If you’re avoiding or cutting back on dairy, you can use olive oil. Its cleaner flavor can complement rather than overpower the earthiness of the potatoes. Still, make sure it’s one you like the taste of, especially for grassier extra-virgin oils. Have a vegan butter you like? By all means, go for it.

Part of the joy of making your own mashed potatoes is the way you can mix-and-match the ingredients. It’s easy to add a bit at a time of whatever ingredients you choose until you get the right texture and taste. Remember, you can always add more, not less.

A few tips for working with fat: If you’re using butter in combination with liquid ingredients, trying adding it already melted to the hot cooked potatoes, Cook’s Illustrated recommends. This allows for the fat in the butter to coat the starch molecules, which will prevent them from absorbing too much water from your milk, cream or stock. Otherwise, you may end up with a gluey mess. Warming your liquids will also prevent the starches from rapidly cooling and going stodgy (and will help keep the potatoes warm for serving). Especially if you’re using lower-fat options, such as milk or buttermilk, take care not to overheat them, or else they may curdle.

Like the other dairy options above, cheese is a multifunctional ingredient, and depending on your taste, you can go as bold or mellow as you want. On the mellower side, you can consider Parmigiano-Reggiano or mild cheddar. Up the ante with smoked Gouda or sharp cheddar or maybe a nutty Gruyere. Want to go really bold? Consider a creamy blue cheese.

Take care not to overwork the potatoes while trying to incorporate cheese, which — you guessed it — can turn them gummy. Fold it in as gently and minimally as you can. Cook’s Country suggests that for very cheesy potatoes, gently fold in about three-quarters of the cheese into the warm potatoes. Then sprinkle the rest on top of the potatoes in the pot, put the lid on and let it hang out for a few minutes to melt. Partially stir in the cheese on top. This gets you fairly evenly distributed cheese without overworking the potatoes, while still creating some enticingly gooey spots.

Other ways to flavor

There are plenty of ways to infuse your potatoes with character right from the start. You can add the allium of your choice — onions, garlic, shallots — to the water in which you boil the potatoes. Vinegar in the water will not only impart flavor, Corriher says, it can prevent discoloring of the potatoes, as well.

Even if it’s not in the water, garlic can be incorporated in other ways. Sweet, golden and softened cloves from a roasted head can be mashed directly in with the potatoes. Garlic powder can be potent but effective and a nice counterpoint to the overall richness. Ditto raw garlic that has been minced or run through a garlic press. Many flavor compounds in aromatic ingredients (garlic, spices, herbs) are fat-soluble, meaning to better carry them through the potatoes and increase your perception of them, you can try cooking them in butter or olive oil first. So think about something like minced garlic sauteed in butter or rosemary bloomed in olive oil. Depending on what you’ve used, you may want to strain out the flavoring ingredient. But definitely use the infused fat.

Fresh herbs folded in or sprinkled at the very end are natural fits. I love the pairing of potatoes and thyme. Parsley or rosemary? Sure, though you’ll want to make sure the rosemary is very finely chopped, because of its tougher leaves. Chives and scallions work well for a final flourish of alliums.

Can you add chopped cooked bacon to your mashed potatoes? You bet, and bonus points if you use some of the rendered fat, too.

For more variety, you can mash other vegetables with the potatoes. Turnips, celery root and cauliflower all would pair well with the spuds.

Even if you are on a journey to achieving your best mashed potatoes, you don’t have to go overboard. Take baby steps as you work to achieve your ideal mash, seeing what works and what doesn’t. Even a small change in something as simple as the type of pepper you use is worth trying. While a grind of black pepper is common for a reason, swapping in white pepper may be just enough of a twist to intrigue your guests — and get them going back for more.