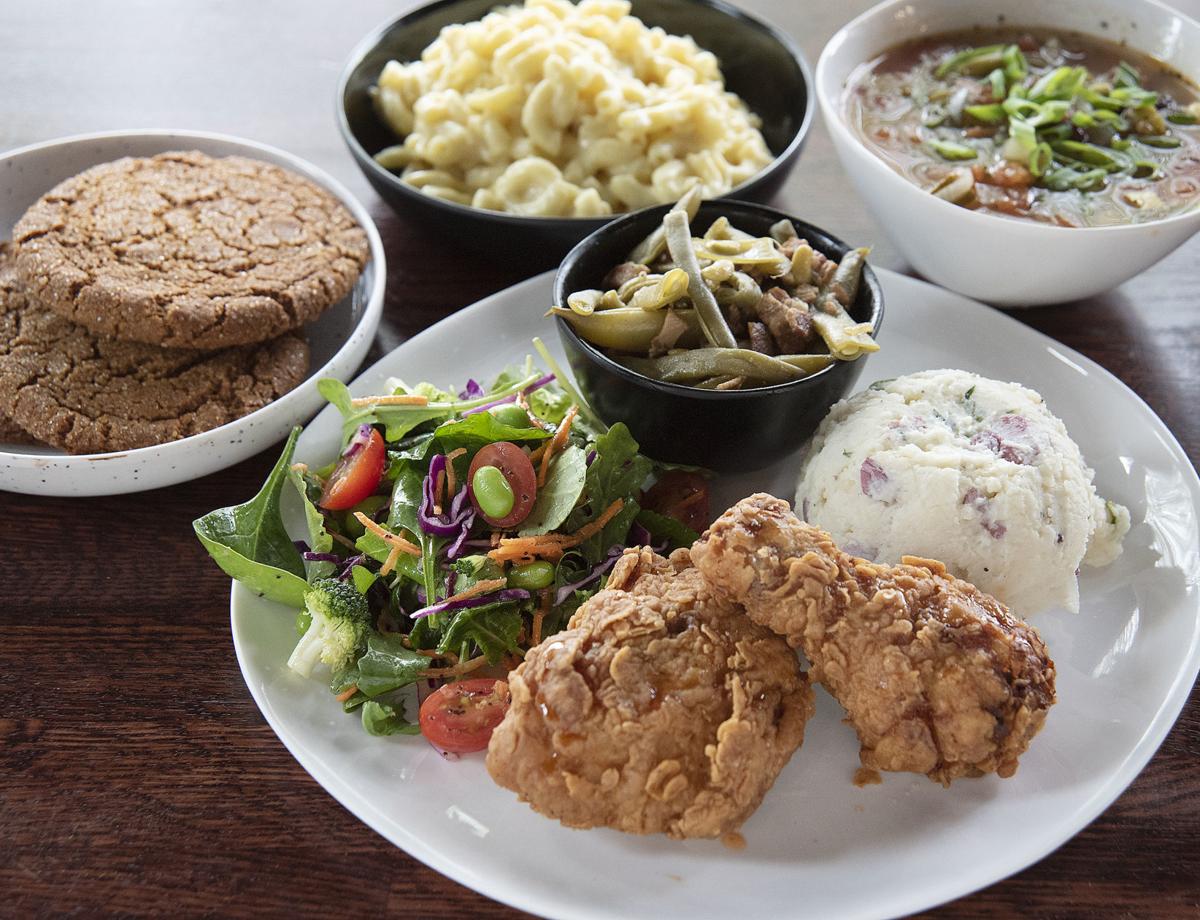 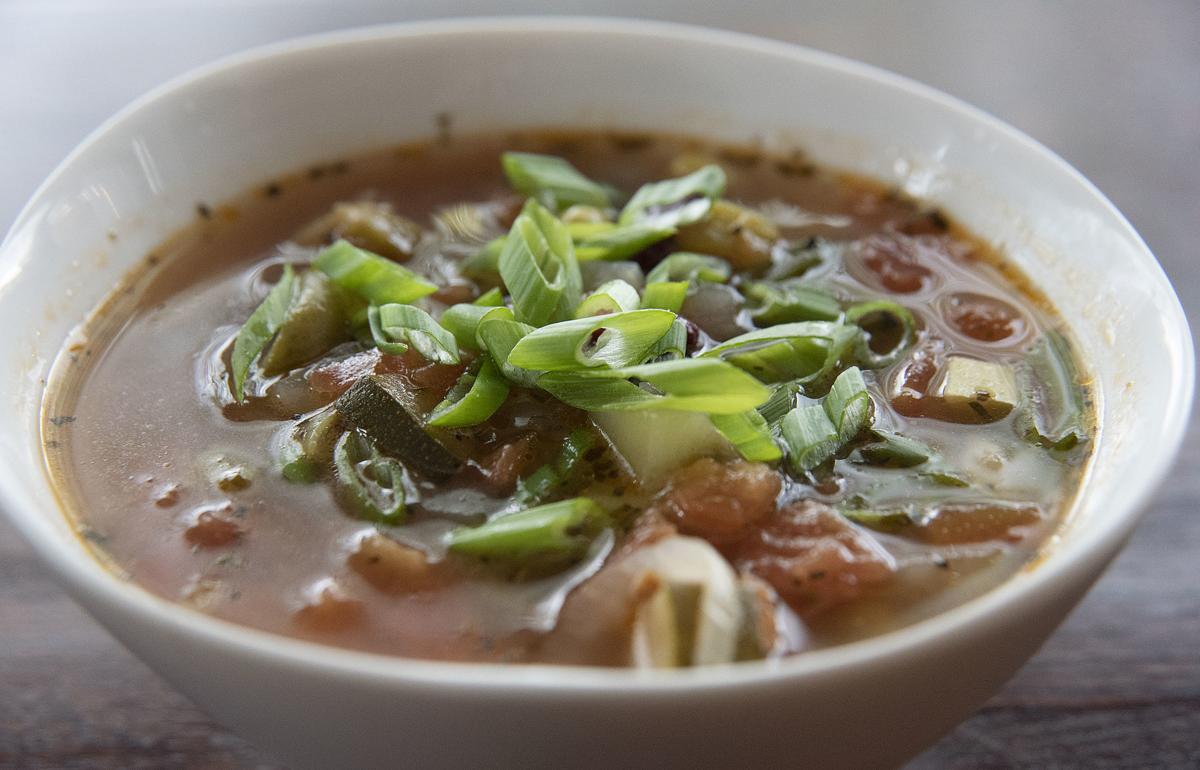 Vegetable minestrone soup without pasta at Hometown Harvest in Frederick. 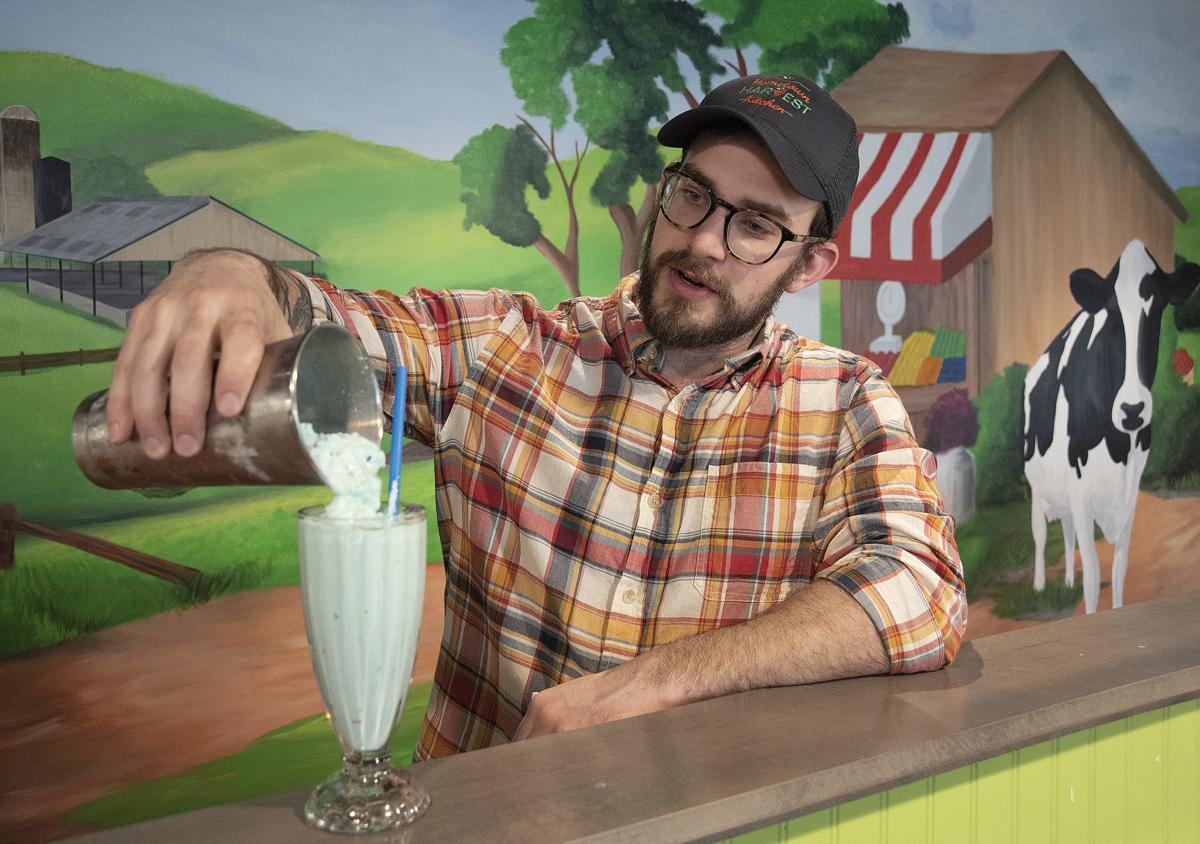 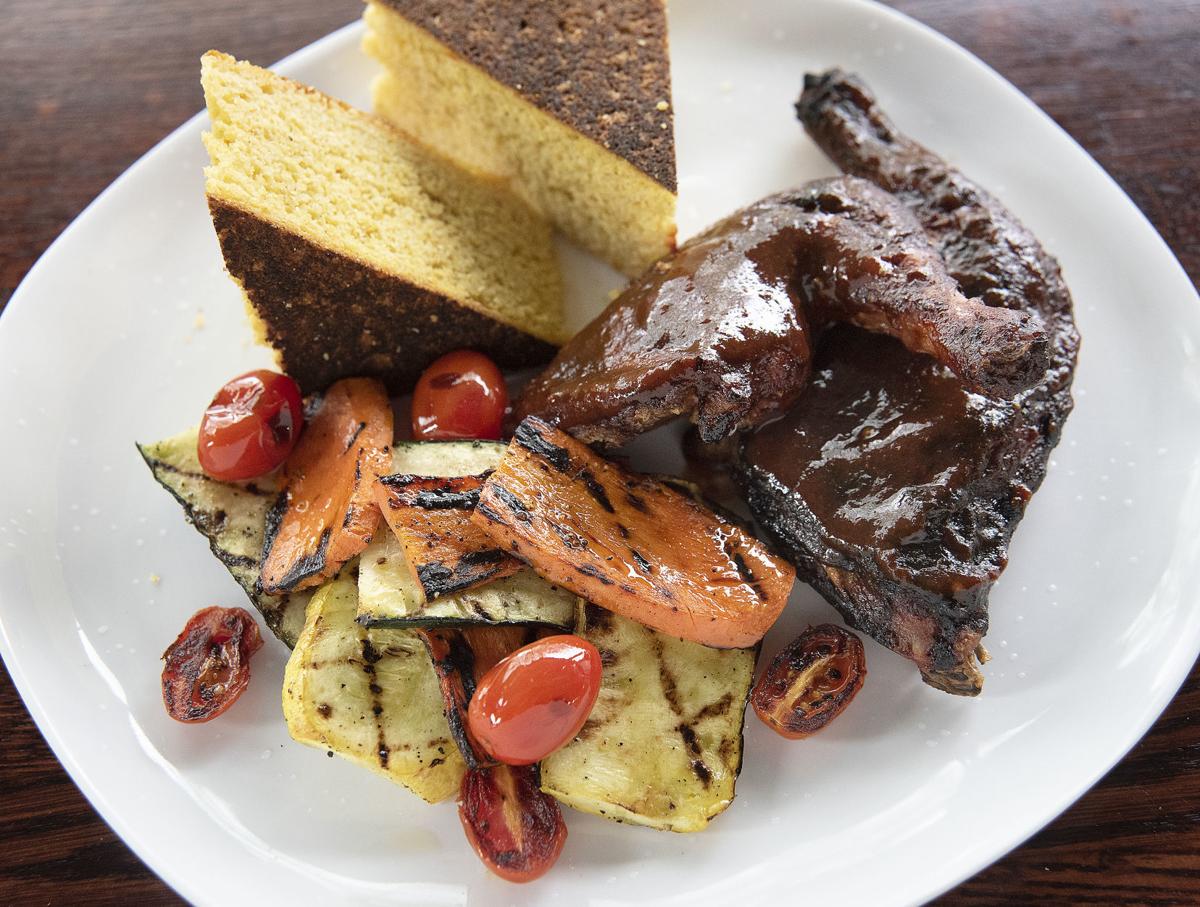 Food at Hometown Harvest in Frederick. Grilled chicken with chipotle strawberry BBQ sauce, cracklin’ corn bread made with buttermilk and bacon and baked in a cast iron pan, and grilled vegetables. 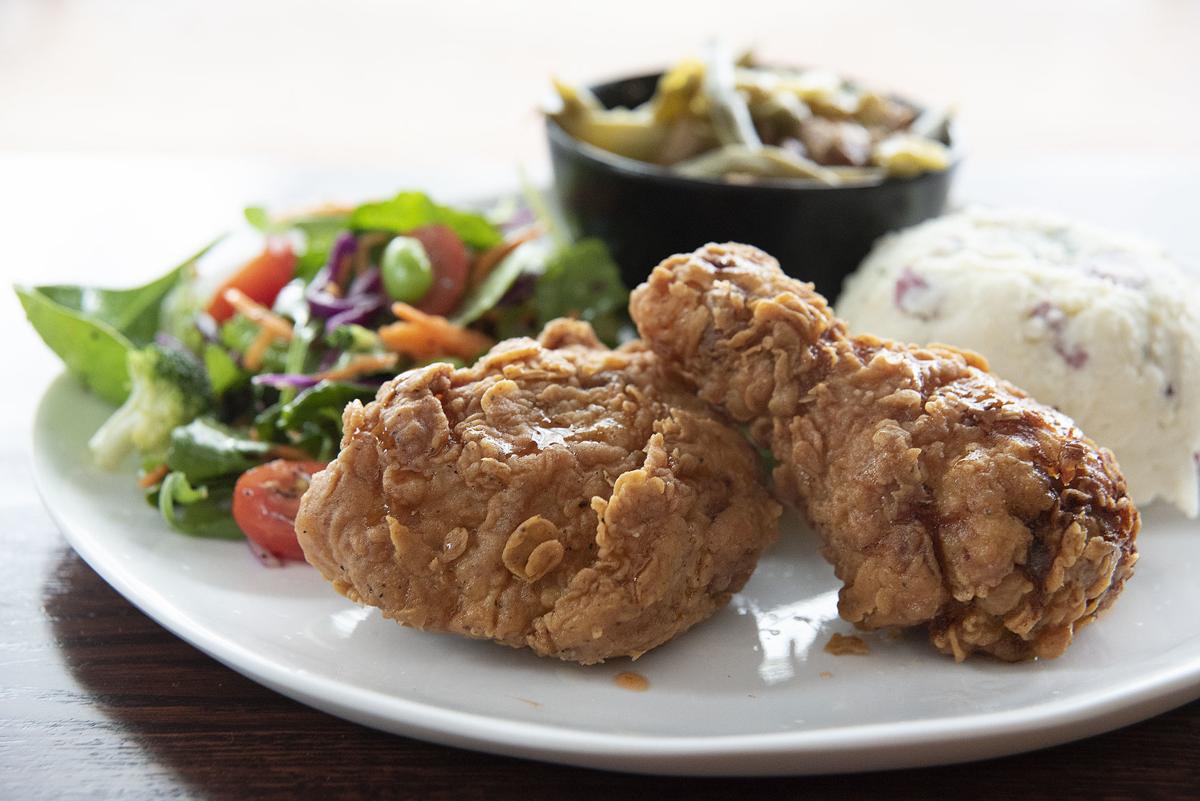 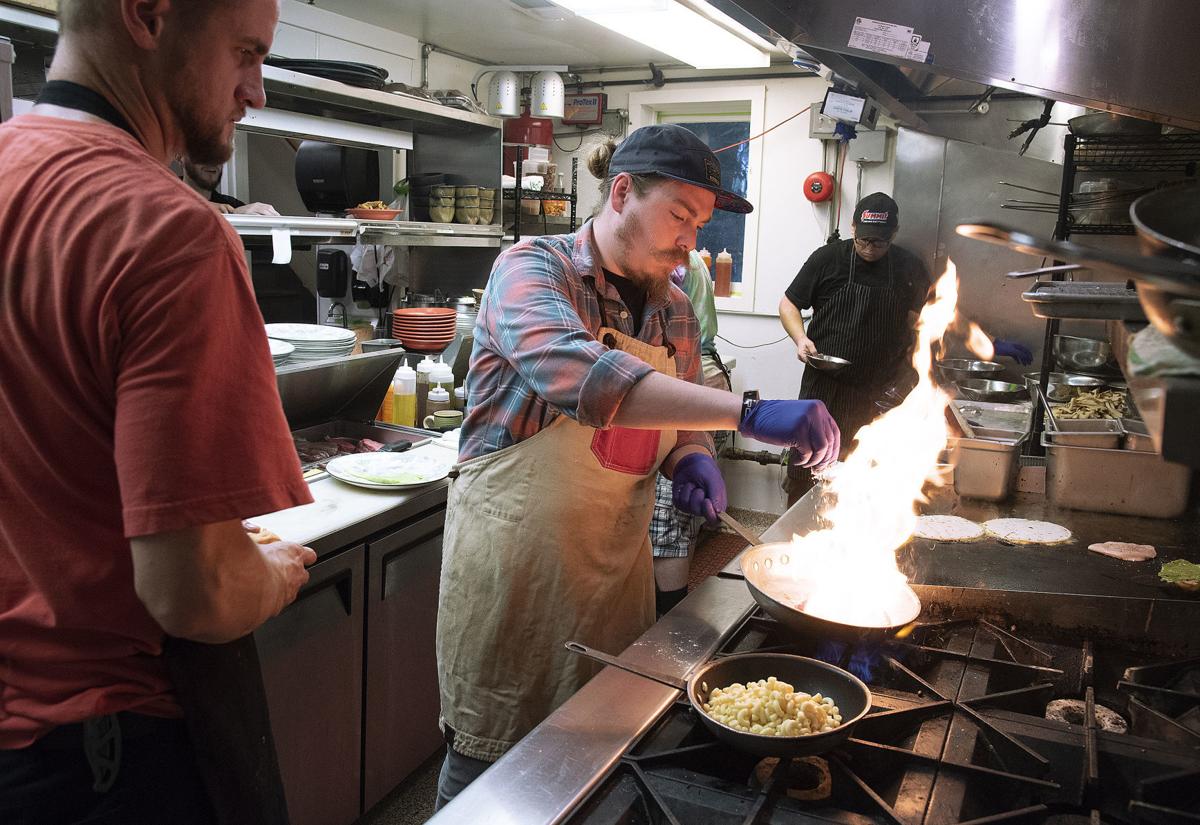 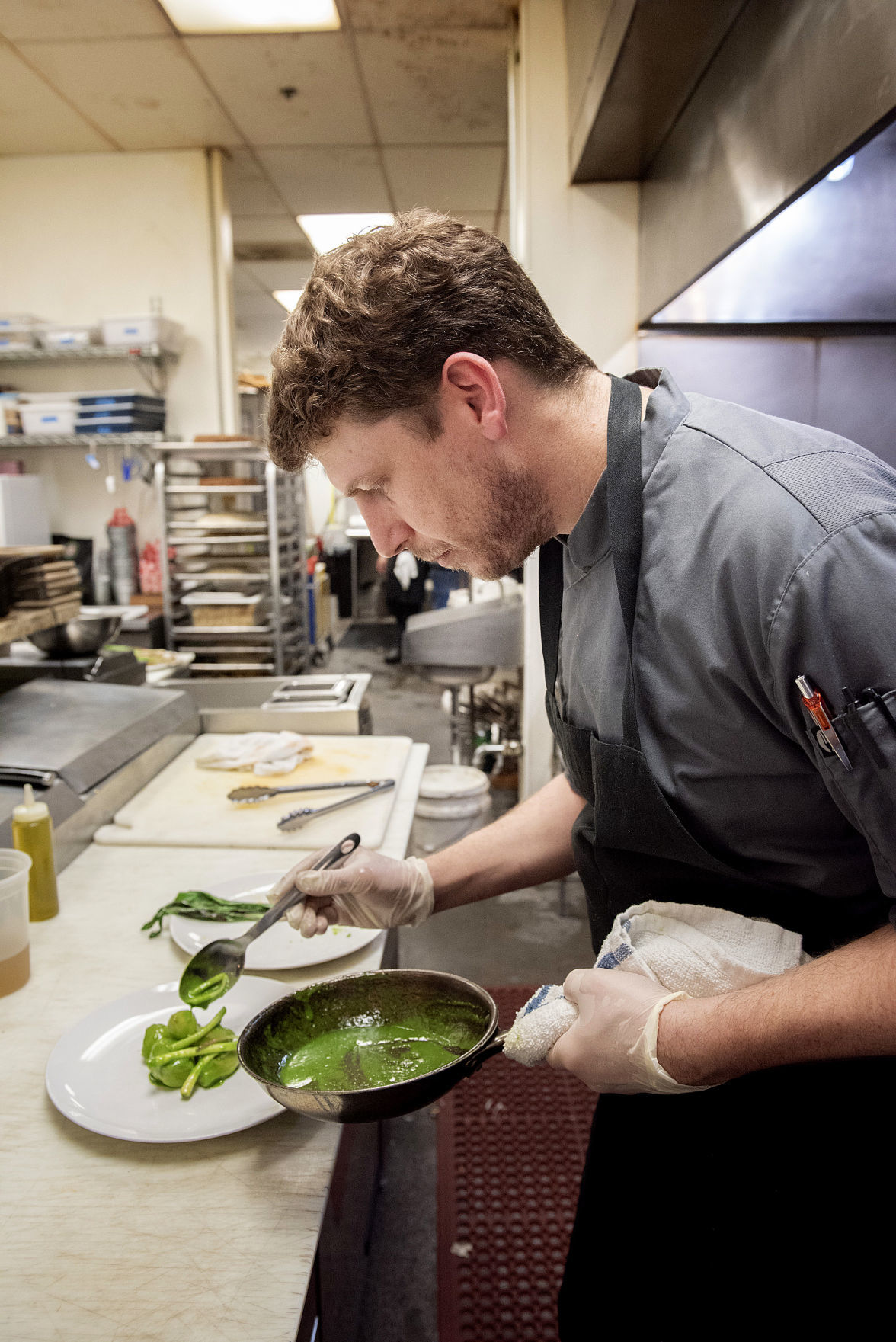 Vegetable minestrone soup without pasta at Hometown Harvest in Frederick.

Food at Hometown Harvest in Frederick. Grilled chicken with chipotle strawberry BBQ sauce, cracklin’ corn bread made with buttermilk and bacon and baked in a cast iron pan, and grilled vegetables.

“Cafeteria-style dining with a liquor license and ice cream,” is the way executive chef Jesse Rogers describes Hometown Harvest Kitchen, a fast casual concept set to open this May in downtown Frederick.

“It’s based off a traditional meat and three,” added the Nashville-born chef, a nod to the traditional Southern restaurants where customers can choose a protein and up to three sides from a curated list of options.

In the case of Hometown Harvest, though, those options aim to be both gourmet and hyper-local. The new restaurant is owned by Abby and Tony Brusco, the couple behind South Mountain Creamery in Middletown. Running the dairy co-op gave them a decided leg up when it came to sourcing for the farm-to-table restaurant.

“Honestly, that was the easiest part of the whole thing,” Tony said. “Usually sourcing is the major challenge, but we’ve been working with local farmers for so long that a lot of that infrastructure was already in place.”

The restaurant is just one on a growing list of exciting new ventures set to open in and around Frederick this year. The scene is so flush that we decided to put together a guide of local restaurants to keep your eye on.

Opening date: Soft opening in early May, with a grand opening planned for May 9

Tony and Abby Brusco always dreamed of opening a restaurant to complement South Mountain’s food delivery service, but “didn’t know it was going to be a reality,” Tony admitted, until last year. That’s when the couple started looking at potential locations for a downtown ice cream shop and discovered the former Greene Turtle Sports Bar and Grille alongside Carroll Creek. Rogers, a former pitmaster for Vanish Brewery in Leesburg, was also looking for a new opportunity, and the three joined forces with Kline to plan out the new restaurant.

“The thought was, ‘Why aren’t we all eating farm-to-table food when we’re surrounded by farmers?’” Rogers said. “A lot of times, it’s presented as kind of expensive or fine dining, but we thought, ‘How can we do it in a way that’s approachable for everyone?’”

That line of thinking resulted in a price point closer to Chipotle than Le Bernardin. A typical meal will cost $11.75 for a meat and two sides, Kline said, or up to $15 with drinks and dessert.

The restaurant will also feature a full-service ice cream parlor with around 22 flavors from South Mountain Creamery. Beyond scoops, ice cream options will include floats, sundaes, and milkshakes mixed with homemade toppings from Hometown Harvest’s pastry chef. Boozier options will also be available (Kline said they’ve already tested a mocha milkshake made with coffee liqueur and a sea salt caramel milkshake blended with bourbon).

Alcohol will be available on tap, too, with craft beer from Attaboy, Idiom, Cushwa, and other local breweries. The team is sourcing wine from Fabbioli Cellars in Leesburg, including a sparkling rosé. And that’s not even the end of the list. The restaurant will also offer sangria (a berry option will hit the menu first), plus rum punch made with Maryland liquor.

“We want to keep things as local as possible,” Brusco said.

Planning the restaurant helped him expand South Mountain’s network of farms and add new options for local produce, including fresh vegetables from small growers in Middletown and Lovettsville.

The one thing Frederick needed, according to customers at the Wine Kitchen? “A place where they could sit down for a quick salad and a glass of wine,” said Jeff Beard, the executive chef for the fine dining stalwart.

That kind of feedback inspired Maxwell’s Kitchen, another fast casual concept that officially opened earlier this month. The final menu marries a few Southern dishes — including a chicken jambalaya inspired by chef de cuisine Zach Sampson — with an eclectic range of globally inspired options. Those include a tuna poke with avocado and rice noodles and a vegetarian kung pao made from diced jackfruit. Plus five types of salad, of course, including a four grain option with plantain and shiitake mushrooms. If you’re looking for other veggie options, turn to a hearty “beetstrami” sandwich with Gruyère and caramelized onions or an on-trend side of curry cauliflower nuggets.

Desserts are limited but creative, with options like a gluten-free Smith Island cake (created by pastry chef Emma Barnes) and gourmet soft serve in flavors like orange-chocolate and beet-vanilla. As promised, the restaurant also offers a small list of wines and local draft beers.

Pepe Tapia spent years running an Italian restaurant in Hagerstown before he decided to make the move to Middletown. His new restaurant, Tapia’s On Main, will also focus on classic Italian cuisine “with a little bit of a twist,” he said.

“A lot of people think that spaghetti and meatballs has to be made one way,” the restaurateur added. “But we want to do something more modern with a lot of local ingredients.”

The main attraction is a wood-fired pizza oven, but Tapia plans to offer a variety of pasta dinners and some Maryland staples, including crab cakes and crab dip. Steaks will take up another significant portion of the menu, plus traditional desserts like tiramisu and cannoli. And when it comes to wine, Tapia is choosing local, with options from nearby Mazzaroth Vineyards.

The space itself will also be a new local amenity. The multi-suite building is currently under renovation and will host Tapia’s and a slew of other artisan businesses, including an incoming brewery.

The team behind White Rabbit in downtown Frederick is teaming up with Cushwa Brewing Company to open a new restaurant in the latter’s 7,200-square-foot Williamsport expansion. The focus, according to chef and co-owner Adam Hatfield, is wood-fired pizza that combines the best features of New York and Neapolitan styles.

“With Neapolitan, you get that light, yeast-fermented crust, but the bottom never gets totally crusty,” said the chef, who previously helmed the kitchen at Pistarro’s. “But New York pizza does get crusty, so we wanted the best of both worlds.”

That “neo-Neapolitan style,” as Hatfield called it, is achieved through a slightly longer bake (around three minutes) in an oven that’s 700 degrees instead of the more traditional 900 degrees. The restaurant will also offer a rotating selection of Detroit-style pizza — thick and pan-style with a buttery crust — plus charcuterie and a few other cold plates. Eventually, Hatfield hopes to incorporate barbecue and catering options.

Like White Rabbit, the new restaurant will take a seasonal approach with an emphasis on local toppings.

“If we were open now, you would see lots of garlic scapes, ramps, asparagus shoots,” Hatfield said. “And corn, later in the season.”

The restaurant will offer counter service and share seating with the expanded taproom at Cushwa, which has long since outgrown its original location. The new space will expand the brewery’s barrel capacity and include a brand-new canning line, according to brewer Garrett Chambers.

“Hopefully, that will get our product out to a wider audience,” he said. “But we also wanted to build a nice space where people can relax and eat and drink beer.”

Trump loses the 2020 election, you owe me a glass of wine at the Main Cup. [beam]

Yawn, who do you like in the primary DickD? Who is YOUR front runner?