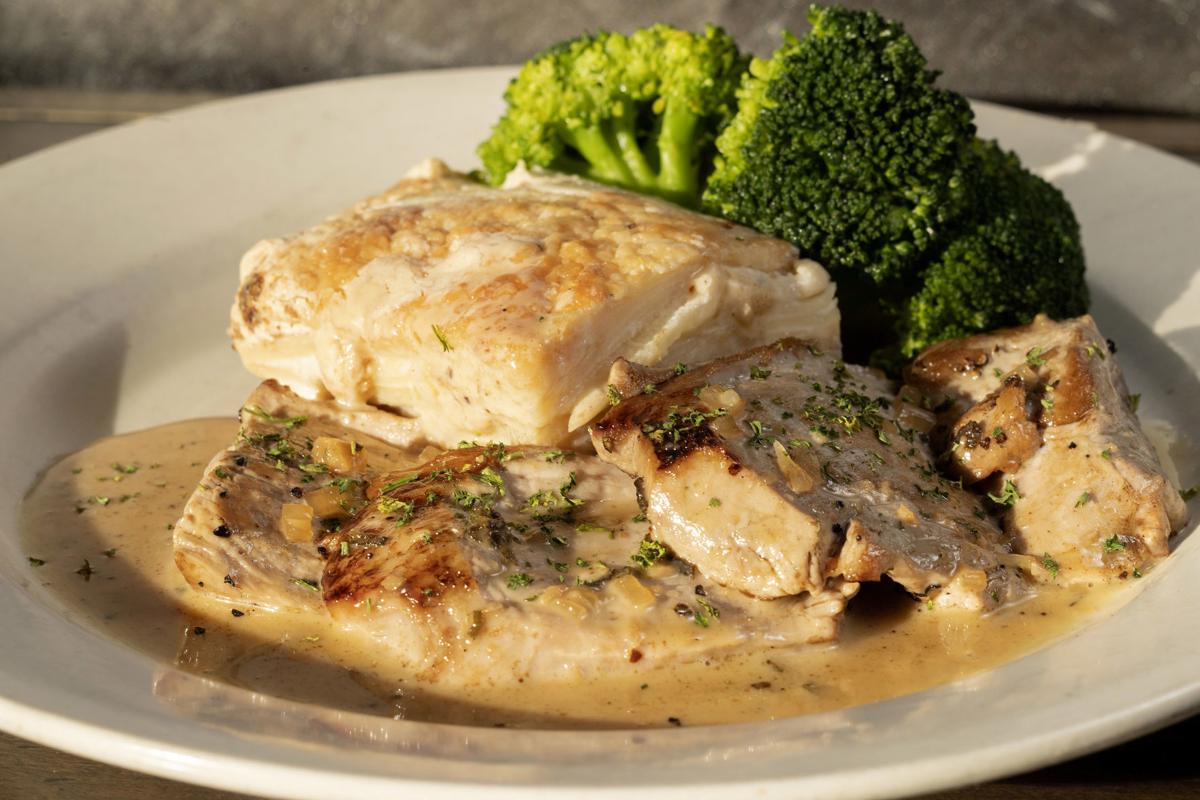 Pork tenderloin cooked in a sage-cider sauce and served with scalloped potatoes and the vegetable of the day, broccoli. 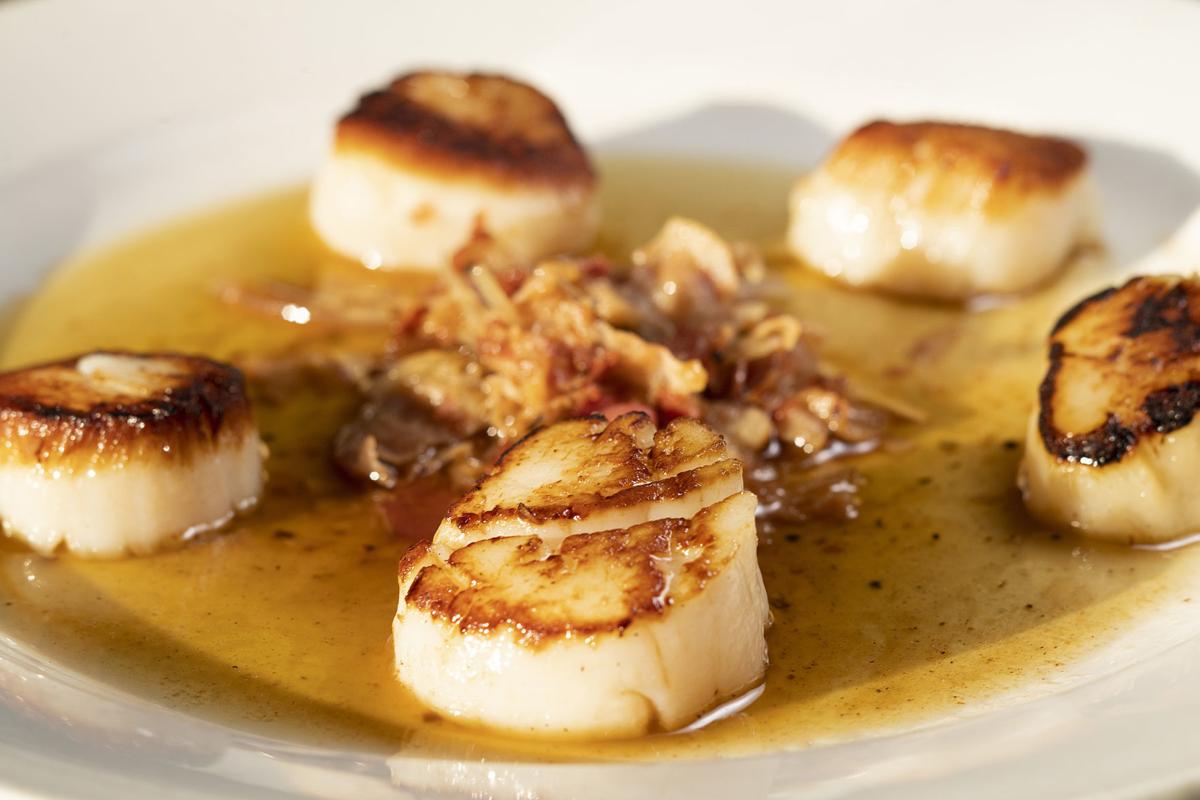 The sautéed dry scallops with shallot and bacon vinaigrette. 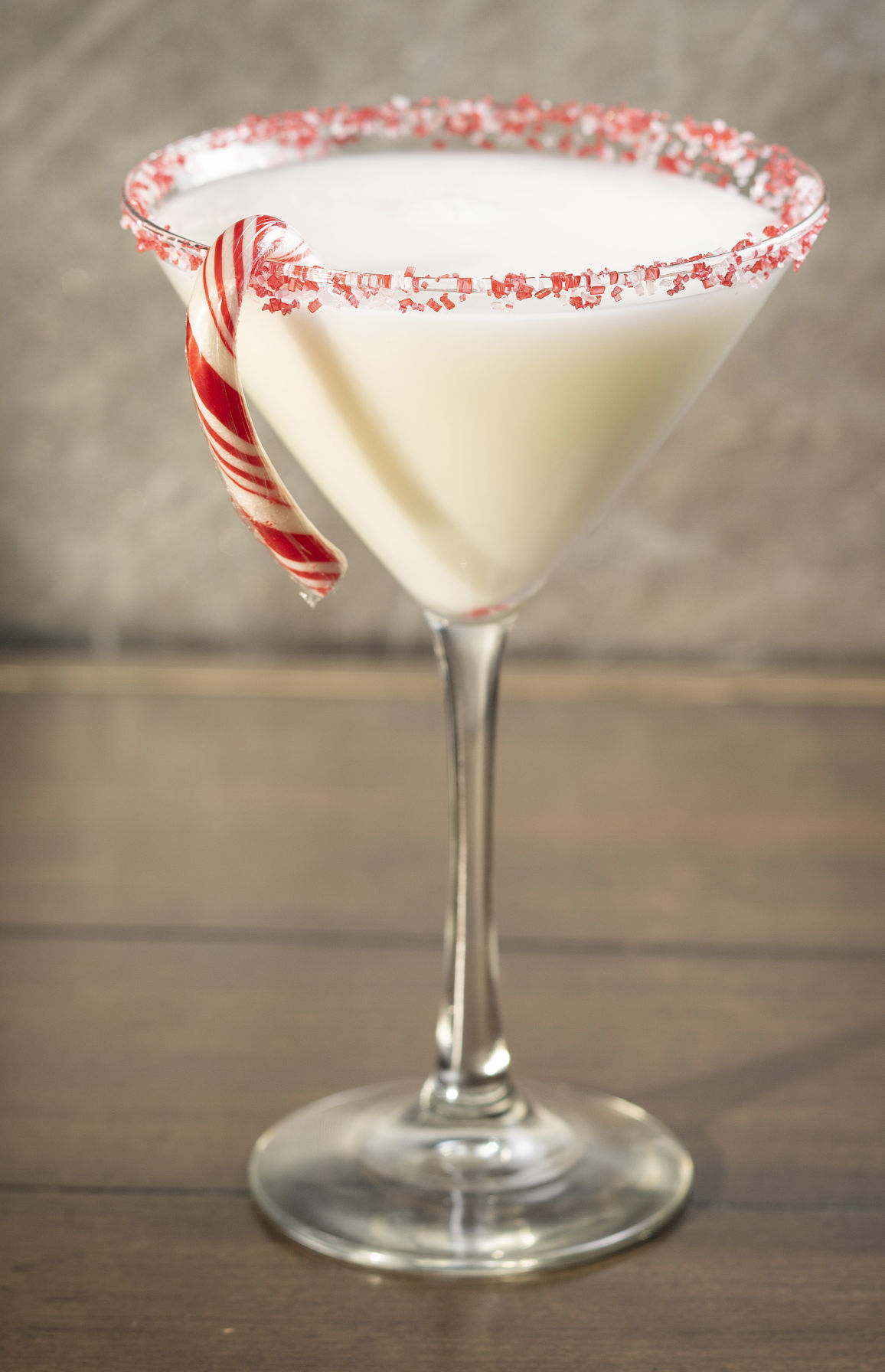 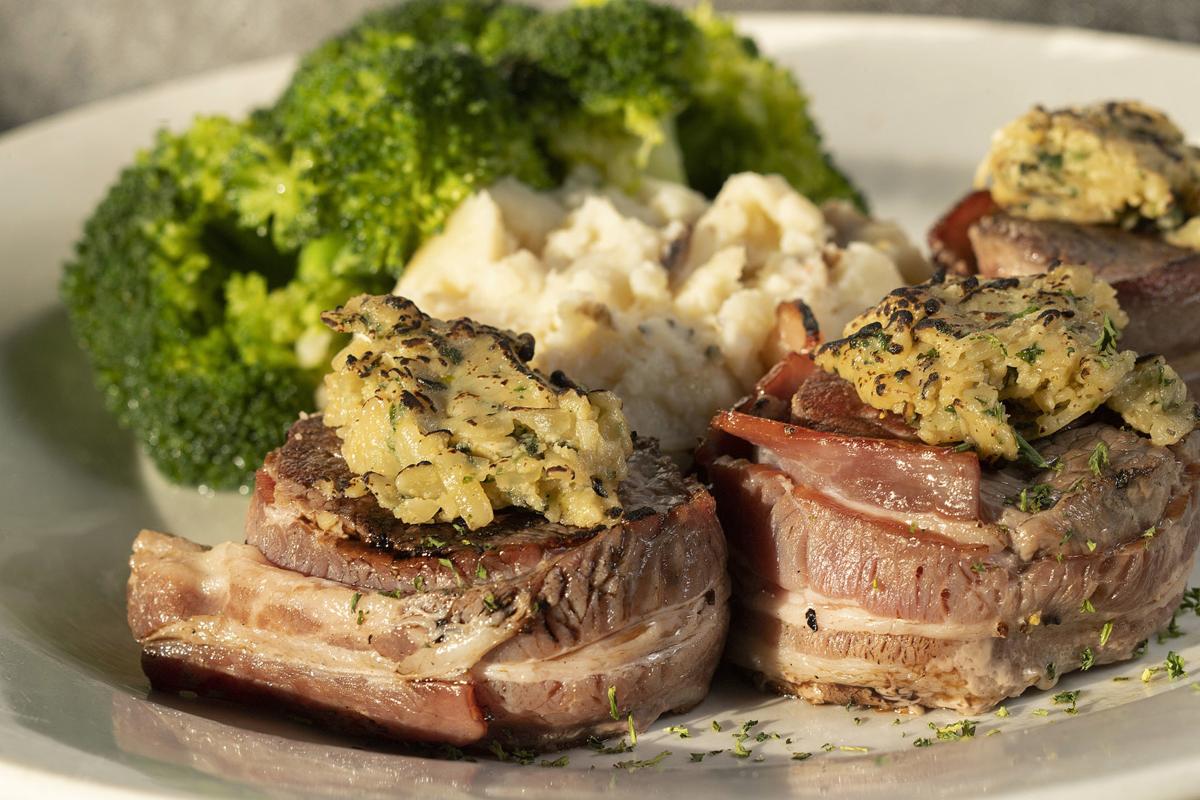 Pork tenderloin cooked in a sage-cider sauce and served with scalloped potatoes and the vegetable of the day, broccoli.

The sautéed dry scallops with shallot and bacon vinaigrette.

To any driver on Urbana Pike who is not hungry or looking out for it, they might pass by Monocacy Crossing restaurant and think it was just someone’s house on the side of the road.

The only indication that it might be something other than someone’s old, white home is the gravel parking lot full of cars right next to it.

Marking a 20-year anniversary in February, Monocacy Crossing is one of the most unassuming restaurants from the outside. So much so, that a guest of mine during a visit said, “When I pulled in I thought this was going to be a diner.”

It is far, far more than a diner.

The interior is like a cozy living room. You feel like you’re at the home of someone you know who happens to be throwing a holiday party. Elegant, tasteful winter decorations adorn the bar area and the dining room has a golden glow that makes you feel warm inside, even though the vintage, free-standing fireplace in the middle of the room is not on.

The only downside to the dining room is that it can get quite loud. During a dinner visit, my guests and I noted how difficult it was to have a conversation and we were practically shouting. The food, however, is a welcome chance to be quiet and enjoy the different combination of flavors that you wouldn’t expect to go well together, but that Monocacy Crossing has intelligently paired.

Take the dinner burger for example. The patty, to start, is a combination of ground brisket and short rib – delicious. The restaurant could have easily taken such a high-quality patty and topped it with your regular ingredients of lettuce, tomato, etc., leaving the star of the meal to be the patty.

Instead, Monocacy Crossing took the patty and elevated it to an unexpected level, topping it with a whole, grilled poblano pepper, queso fresco — which is kind of like a Mexican mozzarella — pickled onions and avocado. What you get is all the savory flavor of a burger with an added Mexican flair. You can also add a fried egg for a $2 upcharge and if you read my last review, you know how much of a fan I am of a fried egg on top of anything.

If you’re not feeling a burger, try the pork tenderloin that’s cooked in a sage-cider sauce and served with scalloped potatoes and the vegetable of the day. A waiter said this dish has been on the restaurant’s menu since it opened two decades ago and has always been one of the most popular items.

The tenderloin was juicy and tender, and the sauce gave off an apple-cider flavor. I’ve mentioned before that sweet flavors, unless it’s dessert, tend to not be my thing. Therefore, I must admit that this dish wasn’t my favorite, but I believe that it’s one of the most popular. The pork and potatoes are cooked well, and it offers a great alternative to your classic beef or chicken.

However, if you are in a beefy mood or want a red meat option, I recommend the garlic and herb topped beef medallions wrapped with applewood smoked bacon, which is exactly what they sound like, or the lamb special, if they’re serving it. I was told it is served quite often and it was one of the best dishes I had while visiting.

If you aren’t that hungry or don’t want to spend too much — because Monocacy Crossing can be pricey — I would focus on the “snack” and “appetizer” portion of the menu. It’s long enough that a whole meal can be garnered from it and some of the dishes are large enough to be a whole meal themselves.

If you order nothing else, order the whiskey duck nachos. They are regular nachos — chips, black beans, cheese, pico de gallo, sour cream — but instead of chicken or ground beef, they are topped with the most delicious shredded duck confit.

Be warned though, the serving of nachos is enough for one person as a meal, or possibly even two. So, order them, but maybe only eat half and take the rest home if you’re staying for an entrée.

Monocacy Crossing also does a fair job with its seafood offerings. The sautéed dry scallops with shallot and bacon vinaigrette are perfectly seared and plump.

The shrimp, scallop and colossal crab risotto with creamy red pepper coulis is another unexpected but brilliantly paired array of flavors with the saltiness of the seafood, the creamy-cheesiness of the risotto, and then the punchy kick of red pepper.

All the pasta and risotto menu items also have the option to be ordered at a half-portion for half the price. When I saw this I was floored. Why don’t more restaurants offer this? What a brilliant idea, I thought. If you are split between two pasta options or want pasta and risotto you can easily get BOTH. As the young people like to say, Monocacy Crossing is years ahead of us, living in the year 2030.

The only seafood option I was disappointed by was the smoked salmon nori roll. A regular-sized handroll with thin slices of smoked salmon placed on top was what we were served, and I found that the portion of salmon to rice was totally off. The point of sushi is to taste the fish, but with every bite of this roll, all I got was the stickiness of the rice.

Monocacy Crossing also serves up a Sunday brunch, but I found that it fell short of its normal dinner rotation.

My guest and I tried the chicken and waffle option, which was a Belgium waffle with a large piece of spicy fried chicken and a side of bacon and bacon gravy; and the Irish breakfast bowl, which was most elements of a traditional Irish breakfast — two eggs, tomatoes, potatoes, bacon, mushrooms — but chopped up and put into a bowl.

Although the chicken served with Belgium waffle was spicy and incredibly juicy, the rest of the meal fell a little short. The waffle was dry, the bacon gravy didn’t pair well flavor-wise and I found the bacon to be an addition that wasn’t needed.

The Irish breakfast bowl was also just ok. The taste was nice with strong flavors of thyme and grilled onions, but other than that it offered nothing special besides the fact that it was served in a bowl.

There was a highlight of brunch, though — the crispy deviled eggs topped with colossal crab. This is an appetizer served for both brunch and dinner and it was a fun take on a regular deviled egg. The eggs are topped with a large amount of crab and then doused with a tangy, zesty Cajun cream sauce that goes perfectly with the crab.

If you’re going for dinner, I also recommend saving some room for dessert. Various options that will fit every taste bud are served at Monocacy Crossing but I would suggest either the cinnamon chiffon cake or the pumpkin bread pudding. Both are heavenly and put you in the winter, holiday spirit.

One more thing. At the end of your meal, no matter whether it's brunch or dinner, your waiter will present you with a little gift. It’s a fun tradition that the restaurant has been doing for the past three years, and so as not to ruin the surprise, I will leave the description at that. You will just have to make a reservation and visit the unassuming white house on the side of the road to find out more.

Good for...?: An elegant dinner

Belgium is a country, not an adjective. The proper name is a Belgian Waffle.

Came here to comment the same thing. A food writer should know that!

Monocacy Crossing is very good and their prices are reasonable.

Well, finally! A report on a hidden treasure!!

Monocacy Crossing has been around for years with amazing selections! The owners and chef offer interesting and delicious fare! (Heck, I remember looking at the menu year after year and thinking, well, that is an interesting combination and EVERY time, it was delicious!)

I hope this paper, (which likes to think of itself as something promoting food, music, and the arts) keeps their eyes open for restaurants like Monocacy Crossing! They just spent boatloads of money on updating the location and it is wonderful!

I went to Monocacy Crossing once. It was very expensive and freezing cold. The only people who weren't wearing their winter coats while they ate dinner were the people at the small table directly in front of the fireplace.

I would suggest giving it another try. Not nearly as expensive as VOLT or Dutch's and the food is the best.

10. Welcome fall in the mountains at Colorfest