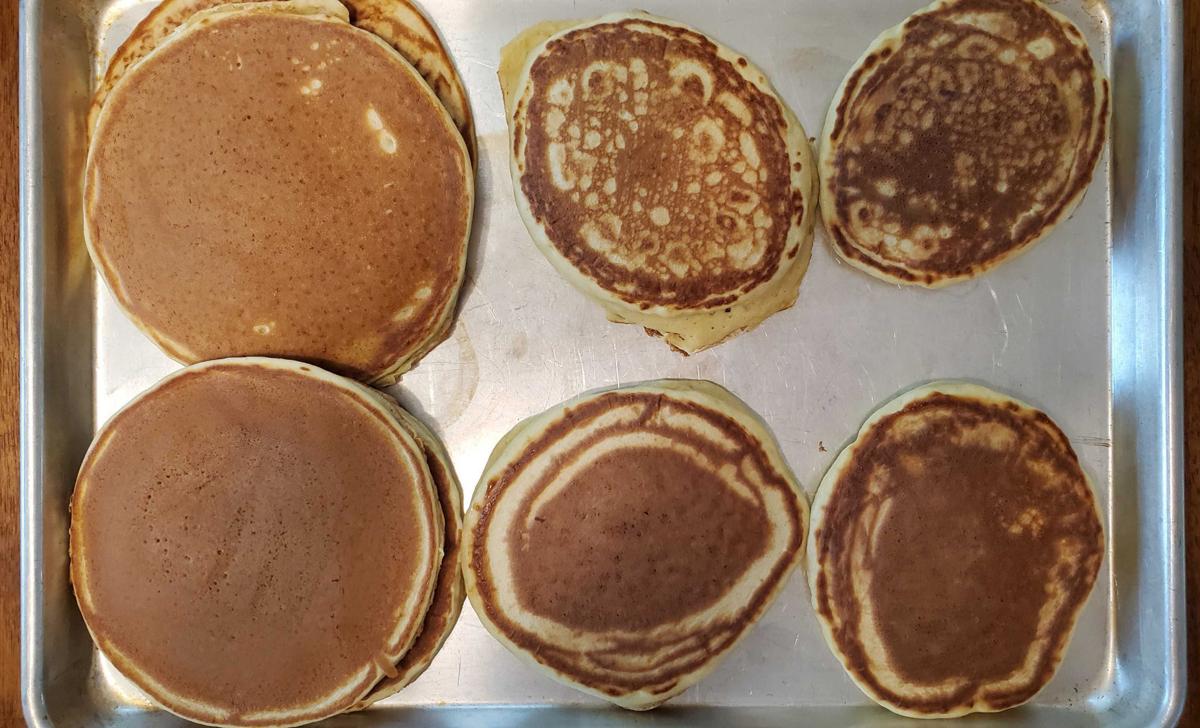 Pancakes made with clabbered milk, left, were flat and thin, especially compared to those made with cultured buttermilk. 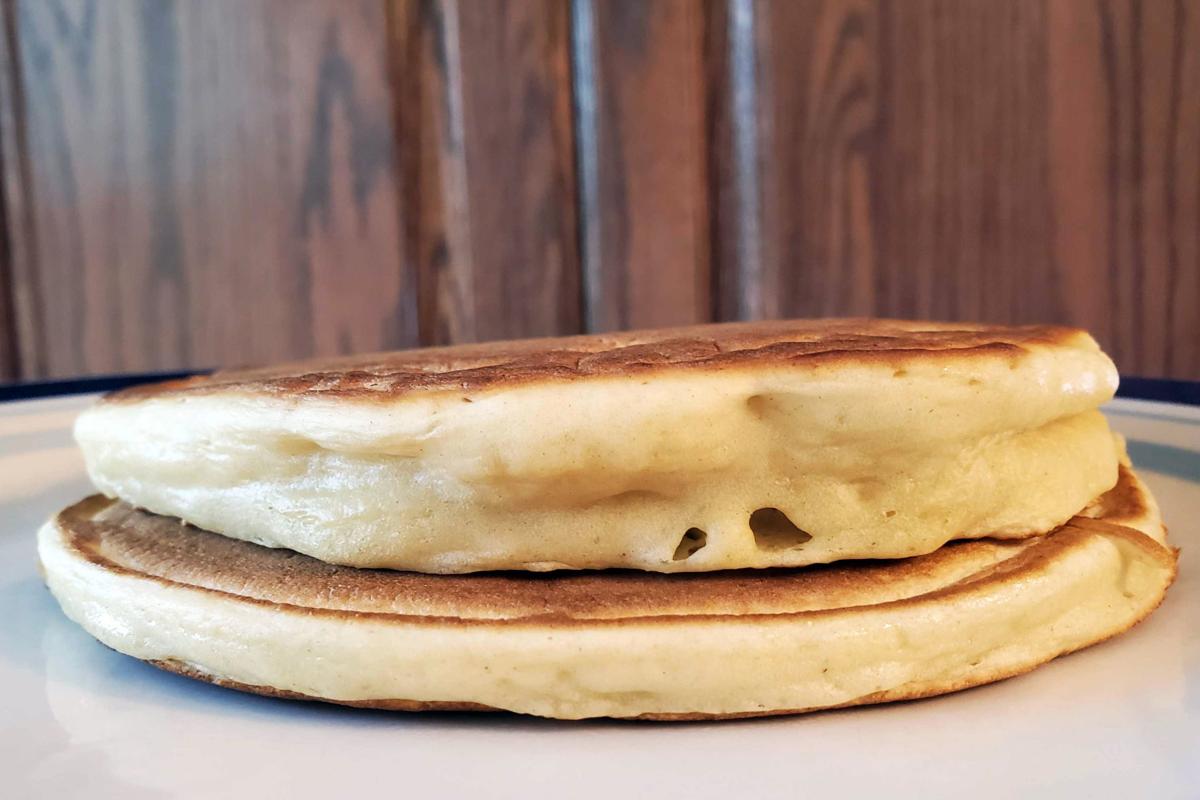 A pancake made with clabbered milk, bottom, and one made with buttermilk, top.

Pancakes made with clabbered milk, left, were flat and thin, especially compared to those made with cultured buttermilk.

A pancake made with clabbered milk, bottom, and one made with buttermilk, top.

Regular readers in this space may have seen my consistent comments bemoaning what I think is one of the largest culinary myths perpetuated on unsuspecting home cooks: that “clabbered milk,” or milk doctored with lemon juice or vinegar, is a great substitute for buttermilk.

When I share a recipe with buttermilk, it’s only a matter of time before someone asks about the substitution or wants to know if they really have to buy it, which I encourage them to. Buttermilk is relatively inexpensive, widely available, lasts basically forever in the fridge and forever and a day when frozen.

It was only after my Stove-Top Naan recipe published a few weeks ago and one reader said they tried clabbered milk, with flat and flavorless results, that I felt compelled to finally formalize my advice. After all, as a recipe writer/developer/sharer, the one thing you hope for is for people to like your food. If they’re being set up for failure by some oft-repeated advice, I at least had to try to prevent future grief.

When a recipe these days says buttermilk, what it really means (unless otherwise specified, though I doubt it) is commercial cultured buttermilk. “It’s essentially like making yogurt,” says Kerry Kaylegian, a food scientist at Penn State who has studied dairy her entire career. Manufacturers start with milk, add a lactic bacterial culture and let it ferment until the proper flavor and acidity has developed. The thickness may be boosted by the addition of extra dry milk and stabilizers, and an extra heat treatment thickens the liquid as well. The fermentation process typically takes 12 to 16 hours.

Traditional buttermilk is a byproduct of making butter. When heavy cream is agitated, Kaylegian says, the globules of fat suspended in water break, separating into two distinct entities: fat (what becomes the butter) and liquid, a.k.a. the buttermilk. Because it typically came from cultured, or fermented, cream, buttermilk was acidic, which helped with leavening and flavor. Clabbered milk may have arisen as an attempt to replicate more of this style of buttermilk.

It sure as heck doesn’t resemble the commercial stuff, which is thick and complex with tart and even buttery flavors. I decided to do some experimenting to help back up my position. I made clabbered milk with 1 tablespoon of distilled white vinegar and enough milk to equal 1 cup, let it sit a little more than 10 minutes and compared it to my store-bought buttermilk. The clabbered milk was no thicker than when I started, nothing like the cultured option. It smelled and tasted like vinegar — shocker — whereas the buttermilk smelled and tasted pleasingly sour, was thick enough to coat a spoon and very much reminded me of yogurt.

Then I checked on the acidity with a couple of pH paper strips. Remember, the pH scale ranges from 0 to 14, with lower numbers more acidic. Store-bought buttermilk registered about 5, not far off from the 5.2 Kaylegian said is pretty standard. The clabbered milk registered 6 and regular milk a neutral 7, just above the more precise 6.6 Kaylegian relayed to me (matching the color of the pH paper to a chart is only so accurate). Why does that matter? The acid reacts with baking soda, the typical leavener used with buttermilk, to provide lift. Less acid, less rise.

But, as they say, the proof is in the pancakes. So I made two batches of my go-to recipe, one with the clabbered milk and one with buttermilk. The clabbered milk produced a thin, loose batter that spread more like crepes. While they did rise, they were dwarfed by the buttermilk batch, which boasted a thick, almost scoopable batter. They spread much less in the skillet, which made for lofty, tender pancakes. Can we assume that whoever came up with the phrase “flat as a pancake” never had made a batch with good buttermilk?

The clabbered milk batch tasted about as flat as it looked. Not outright bad, just not like anything much at all, other than slightly metallic and tongue-stinging. My guess, which Kaylegian says is plausible, is that the reduced acidity meant the baking soda wasn’t fully neutralized. At least maple syrup can mask a lot of flaws.

The buttermilk batch had a very subtle tang — not as dramatic as I thought it would be compared to the other batch — but the tender, fluffy texture made this the obvious winner.

Kaylegian’s buttermilk devotion means she likes to drink it and add it to smoothies, but she will use clabbered milk in pancakes on the rare occasion she’s out of the good stuff. “The pancakes are never the same,” she says. “I use it as a last resort.”

Even treating commercial buttermilk as a uniform entity can be tricky, she says, as there’s plenty of variation among brands and regions of the country. Thickness is one inconsistency. Depending on where you are, you may find low-fat, whole or both. Some companies will even shave butter into the mix to more closely resemble the traditional stuff that may have contained flakes of fat that were not fully separated out. Be familiar with what you’re using (pour it out to see how thick it is, smell it, taste it) and how that might affect your food.

The same goes for any substitute you may be considering. You know where I stand, but don’t just take my word for it. Stella Parks over at Serious Eats did a deep dive into substitutes by making identical batches of her drop biscuits. Her grade for clabbered milk? F-. Ouch. Like me, Parks was also underwhelmed by reconstituted buttermilk powder (C+), which, again, never achieves the thickness of cultured buttermilk (the powder, however, is great for adding tangy flavor to frostings). Plain yogurt fared better (B+), with kefir, milk fermented with bacteria and yeast, the runaway winner (A+).

Substitutions are a natural part of cooking, although you have to go in acknowledging you may not get a match to the original recipe. I want people to be able to use what they have, to feel comfortable experimenting and adapting dishes to their own tastes and supplies. But even I have my limits. Do yourself a favor and save the lemon juice and vinegar for your salad dressing — not your pancakes.

Vibrant spring peas in two forms add texture, color and nutrition to this grain dish. Bulgur - parboiled cracked wheat - is a great warm-weather option, because it cooks by absorbing the hot broth while off the heat. You can use couscous instead, but it won't have the same appealing toothsome quality.

Stir in the bulgur and cook, stirring occasionally, until it darkens slightly, 2 to 3 minutes. Stir in the broth and 1/2 teaspoon salt, increase the heat to high, and bring to a boil. Remove the pan from the heat, cover and let the pilaf stand until all the liquid is absorbed, about 30 minutes.

In a large saute pan over medium-high heat, combine 1 tablespoon butter and 2 cups of the peas and cook, stirring frequently, until the peas are very soft, 4 to 5 minutes. Transfer to a bowl and mash well with a fork.

When the pilaf is ready, discard the cloves, cinnamon stick and bay leaf. Stir in the reserved mashed peas and gently warm over low heat.

Return the pan to medium-high heat and add the remaining 1 tablespoon of butter. When it melts, stir in the sugar snap peas. Cook, stirring frequently, until the snap peas are crisp-tender, 4 to 5 minutes. Add the remaining 2 1/2 cups of peas, along with the mint, the remaining 1/2 teaspoon of salt and the pepper. Cook until just heated through, 1 to 2 minutes. Taste, and season with more salt and pepper if needed.

To serve, spoon the pilaf into shallow bowls and spoon the snap pea mixture over the top. Serve hot.

I read every word because I never have buttermilk on hand but do buy plain yogurt. How many people these days are actually making biscuits or pancakes from scratch. How many are asking, "what is buttermilk?" My twin aunties b. 1875 used to relish buttermilk as a beverage, *so disgusting*, one lived to 85 and the other to 99, firstborn of 13 kids, outlived them all.

is there a difference between using low fat buttermilk or the regular?