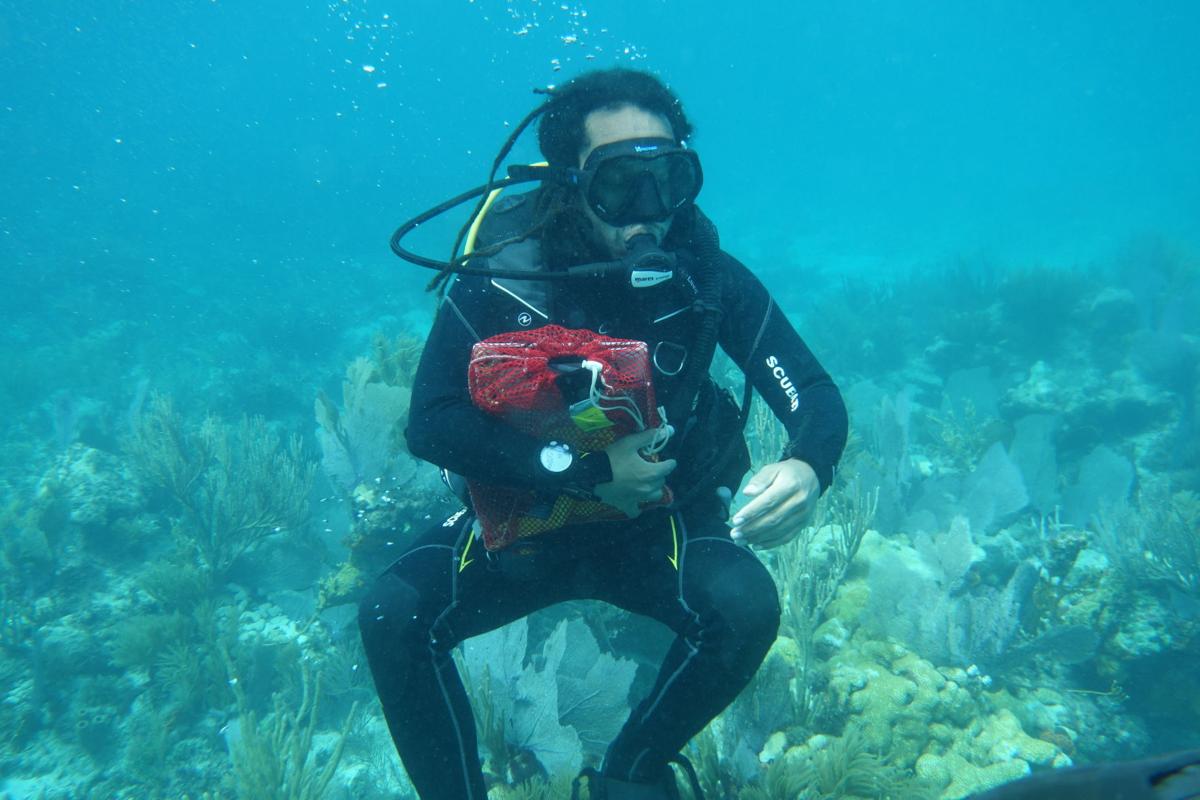 Recently, Justin Dunnavant was featured in a partially animated segment on the Hulu series “Your Attention Please” that spotlighted the work he is currently doing on the environmental impact of the slave trade. It involves a lot of underwater archaeological work with shipwrecks. 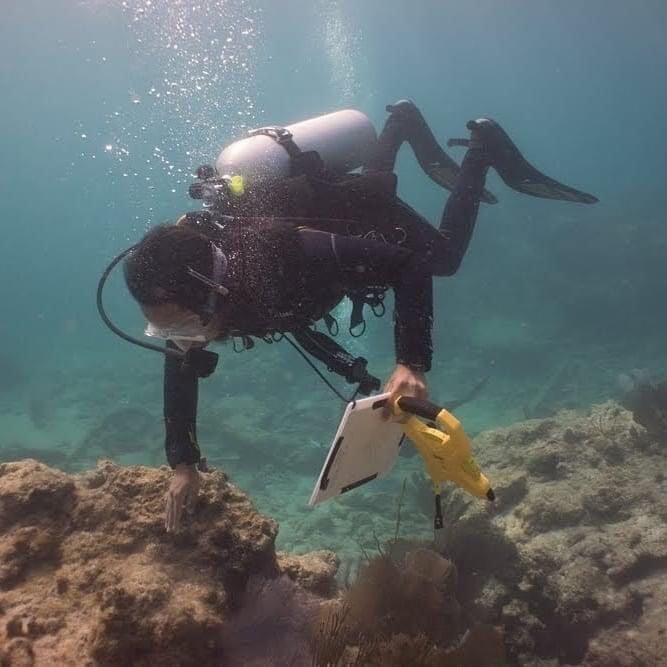 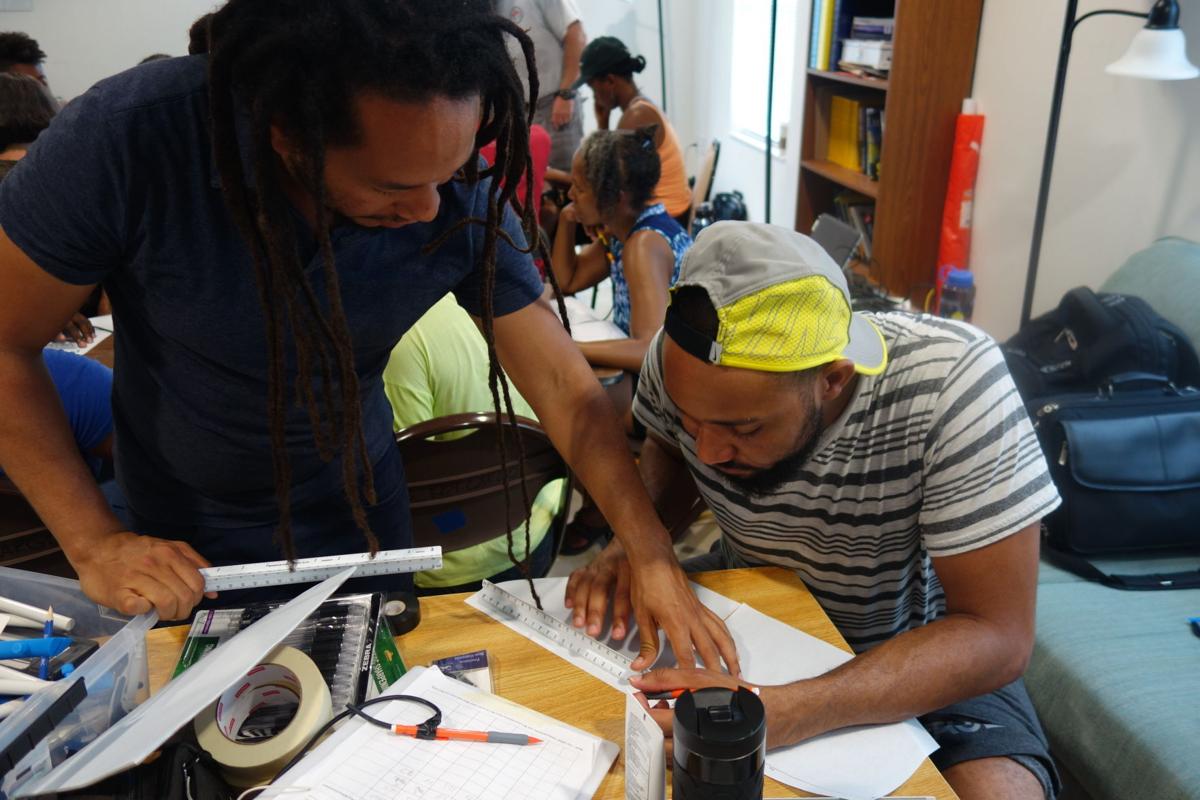 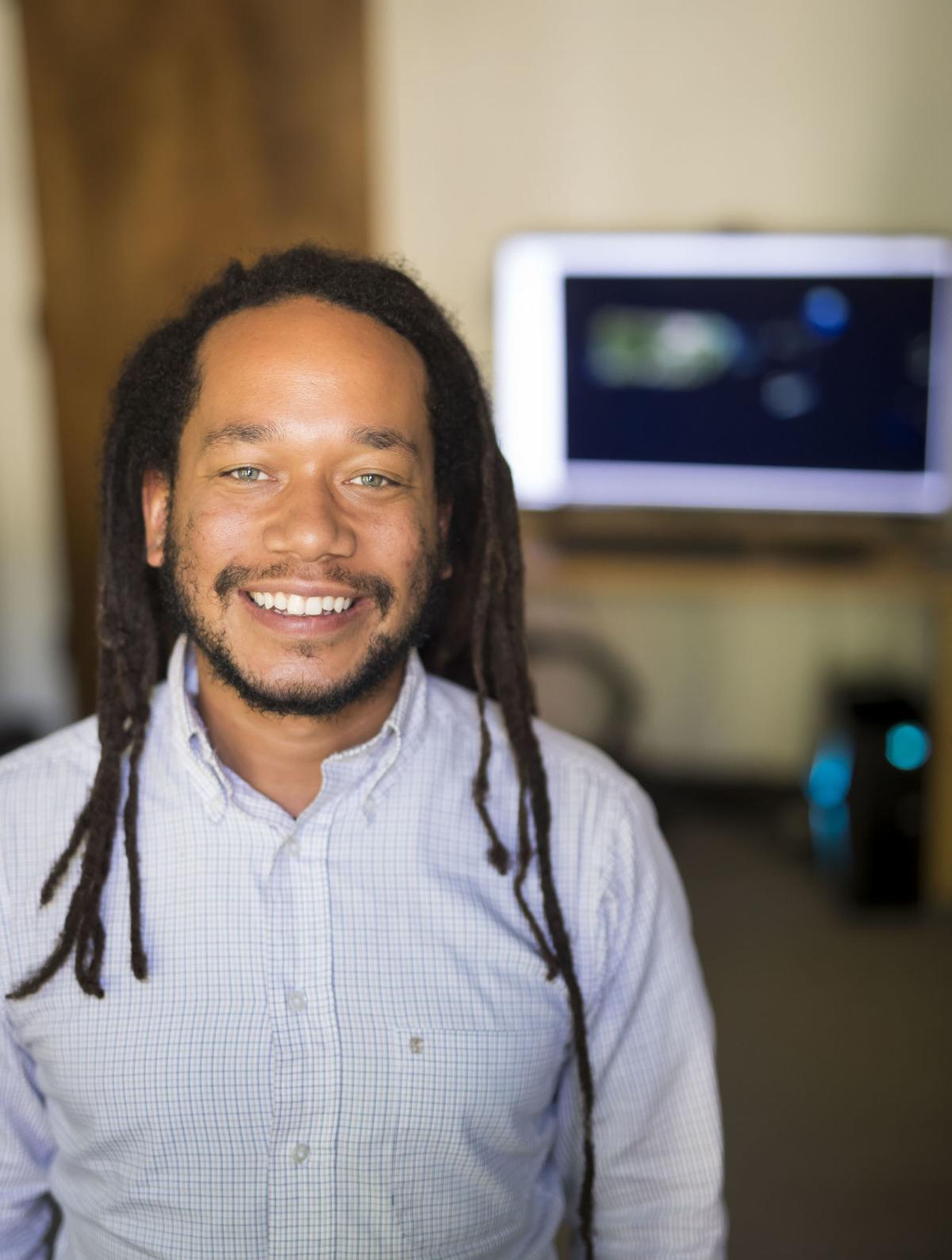 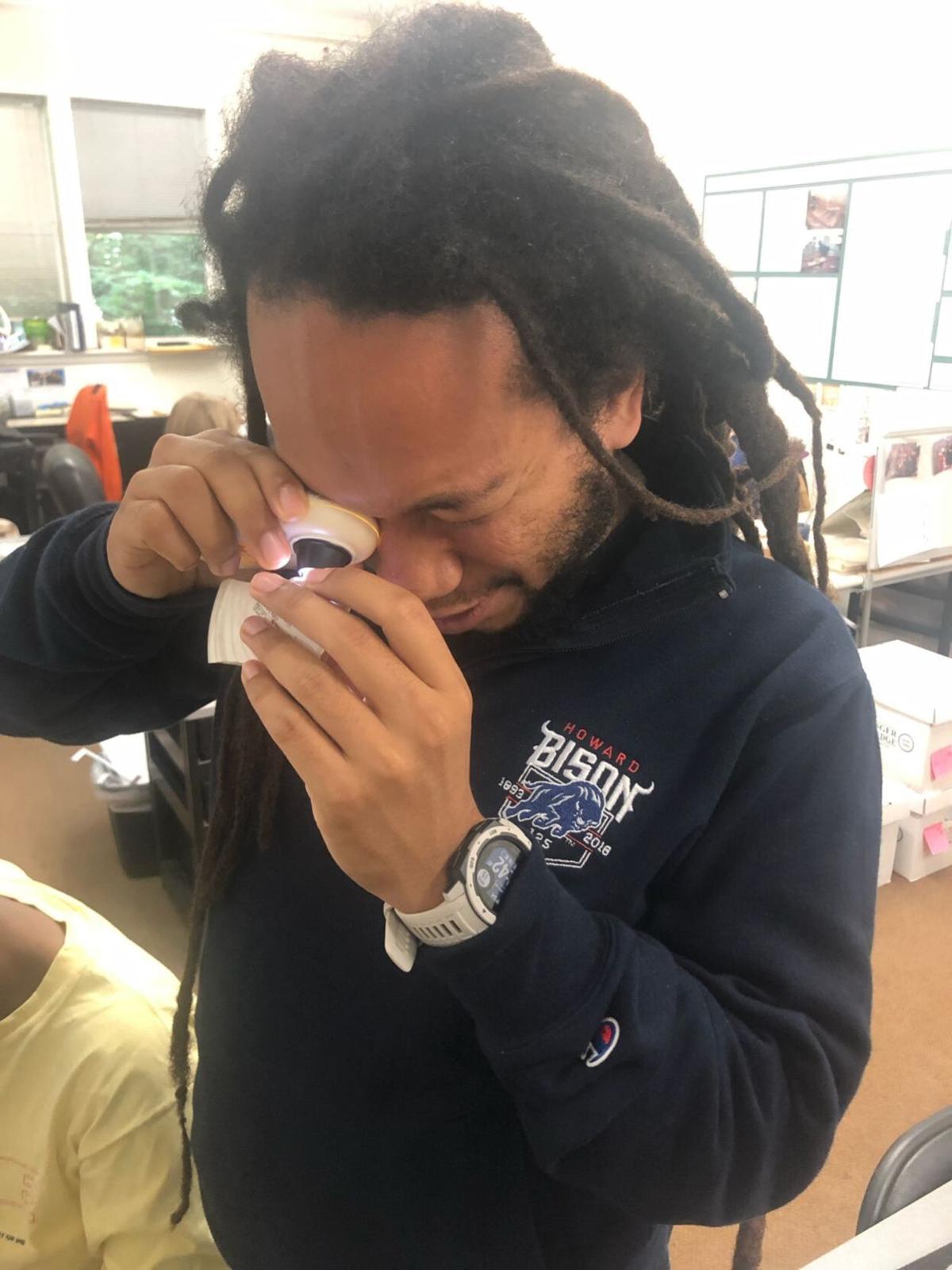 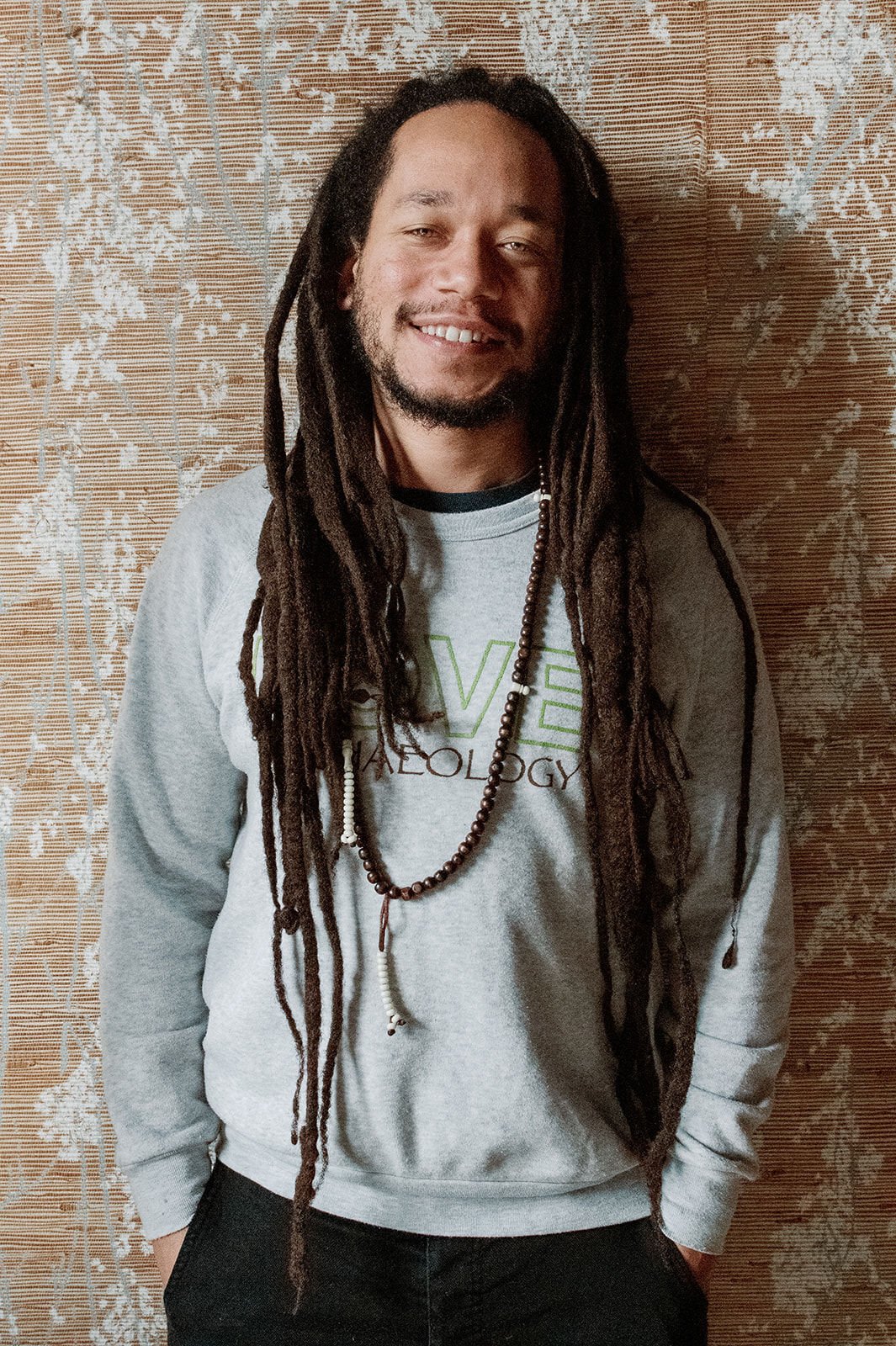 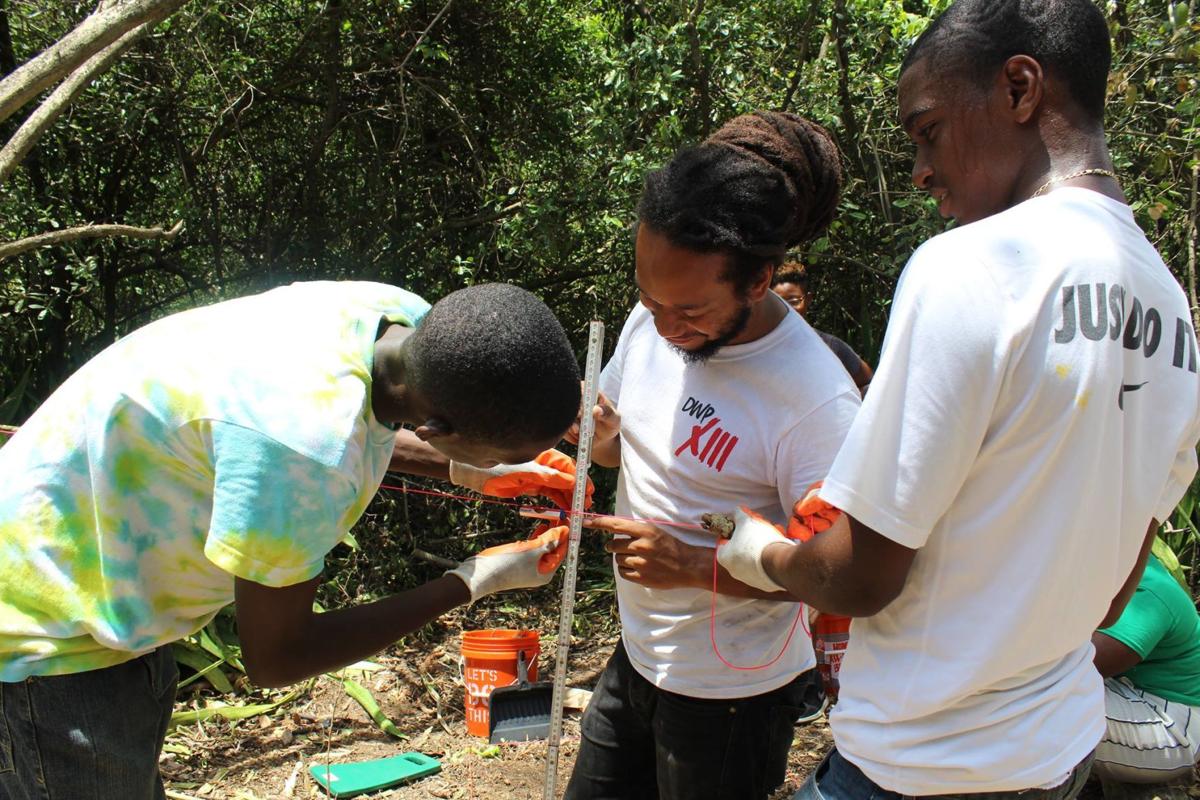 Justin Dunnavant strives to pass on his love of archaelogy to others.

Recently, Justin Dunnavant was featured in a partially animated segment on the Hulu series “Your Attention Please” that spotlighted the work he is currently doing on the environmental impact of the slave trade. It involves a lot of underwater archaeological work with shipwrecks.

Justin Dunnavant strives to pass on his love of archaelogy to others.

In some circles, Frederick native Justin Dunnavant is regarded as the Godfather of Black archaeology.

At age 32, he is the cofounder and president of the Society of Black Archaeologists. He graduated at age 15 from Gov. Thomas Johnson High School after skipping the eighth and 12th grades. He has a doctorate and a master’s degree from the University of Florida in anthropology and two bachelors degrees from Howard University in history and anthropology. He has traveled the world as a Fulbright Scholar and speaks five languages, including Arabic and Swahili.

Recently, Dunnavant was featured in a partially animated segment on the Hulu series “Your Attention Please” that spotlighted the work he is currently doing on the environmental impact of the slave trade. It involves a lot of underwater archaeological work with shipwrecks.

“I tell people, I think I have done enough in my life to be happy,” Dunnavant said in a phone interview from Los Angeles, where he will soon be teaching archaeology at UCLA. “So, everything else is just kind of gravy on top. My goal is to continue to encourage young people to get into archaeology. I think we do a bad job in engaging and retaining young people and getting them interested early on. There’s no resources and no way to capture their attention.”

Archaeology was the perfect subject for Dunnavant. It paired his love of history with his desire to travel the world and explore.

It also presented an opportunity.

“There were few people that looked like me doing archaeology,” Dunnavant said, referring to his African-American heritage.

When Dunnavant was in second grade at Monocacy Elementary School, his teacher called in his mother, Sharlene, for a conference to tell her there wasn’t much more she could offer her son. He was too bright. The teacher recommended Dunnavant immediately skip ahead to third grade. But the request was denied by the school, Sharlene said.

While his friends were outside skateboarding, Dunnavant was at home writing reports on the things he learned in school. He would join his friends on the skateboarding and social scene, but it was clear where his priorities were.

His friends would tease him and call him a nerd, and Dunnavant would shoot back, “You are illiterate.” He often complained that his classmates would not let the teachers teach. His thirst for knowledge and understanding was constant and deep.

When he entered high school at age 12, after skipping eighth grade, there was some concern about how well he would assimilate with older kids. It was the same when he enrolled at Howard University on a full scholarship at age 16.

But Sharlene was not worried. Dunnavant had spent a lot of time with his two older brothers, Warren and Chase, and it was not unusual for him to be around older kids who set an example for him and kept him grounded.

“Justin is going to make a difference in this world, and I don’t know what it is,” Sharlene said. “I tell him to be patient and keep doing what you are doing. It’s all going to come to you. God has a plan for this child.”

Like most people, Dunnavant’s life has been completely upended by the coronavirus pandemic. Instead of being out in the field, mapping underwater shipwrecks as an archaeological consultant for the Smithsonian, he has been conducting most of his day-to-day business virtually over Zoom.

His travel schedule was once so robust that Transportation Security Administration agents at the airport began to recognize him. But now it’s largely been reduced to shuttling between his current home base in Nashville, Tennessee, where he is doing post-doctorate research at Vanderbilt University, and Southern California, where he will be permanently living in July.

In ordinary times, Dunnavant would be spending most of his time on the Caribbean Island of St. Croix, where much of his research on shipwrecks and the slave trade are centered and where he helps run a program that trains kids to scuba dive and do archaeology.

“Justin never works a day in his life, because he absolutely loves what he does,” his mother said.

The virtual world, fueled by the pandemic, has provided some unforeseen benefits.

“The main thing is, it has normalized Zoom,” Dunnavant said. “That’s been particularly good for our international colleagues.”

When the protests and social unrest occurred during the summer of 2020, Dunnavant said every major archaeological organization reached out to the Society of Black Archaeologists and expressed an interest in collaborating and working together.

In 2012, when Dunnavant and four of his research colleagues founded the organization, he said there were about 60 Black archaeologists that held doctorate degrees.

That number has doubled over the past nine years, as the legacy grows with Dunnavant’s fingerprints all over it.

“It’s been great,” he said. “Just seeing that number grow and the connections that are growing from it is amazing. The fact that we have colleagues that we are talking to in other countries, and they expressed similar views and are interested in collaborating, is big.”

What a great story! Super interesting. I hope he's able to travel again soon, sounds like he's an inspiration to a lot of people in the field doing some very cool work. Frederick is cheering you on Justin!!

I thought about trying to explain it to you, or asking another question & seeing if you might figure it out for yourself but then I came to the conclusion that you don’t care. You are a troll. Just because you post things in this forum that come off nasty or racist, you aren’t totally ignorant. Obviously this type of thing irks you. Ironically, the less it bothered you or people like you the sooner we wouldn’t need them. In other words, you are (in a way) the cause of your own misery. By the way, if you want to start a white archeological society, go ahead. Nobody is stopping you.

Maybe you can't "explain" it to me, sniper, because there's nothing to "explain." You know full well that A) using the word "Black" makes this is an entirely racist name to call an organization and 2) if I, or anyone, for that matter, started up a "Society of White Archaeologists" the public outcry calling it racist would be deafening. You know it, but you just can't admit it. So, get off your little soap box and go put your head back into the sand.

I like that you went from A to 2. If you had had a third point, it could have been III.

You did notice that I corrected the typo, didn't you public?

That was a typo?

Why would you have to ask that, public?

Because I thought you were more clever than that.

Jim Crow is still alive. Separate but equal is now ok, but only when it benefits the liberals. I refused to join the Black Student Union in college because I thought there should only be one student union. Columbia College is holding separate graduations for affinity groups, like LGBTQ, Latins, Blacks, economically disadvantaged. It's ok because the liberals decided it is. Just imagine if someone decided to hold a Whites Only graduation.

I hope you aren’t suggesting that it would be conservatives who would decide to hold a Whites graduation.

That was my whole point, bosco. Anything that European Americans would do that has "White" in it would be decried by liberals as racist. You and I both know it, yet trolls like the above MrSniper are under the misconception that only White people can be racists. Hell, look at N.Y. City's “The 8 White Identities,” that they wanted parents to "reflect on." That whole thing was dreamed up by a some Barnor Hesse guy who is happens to be black and, apparently, a popular racist. As I've said, racists come in all colors, it's just the White ones who get recognized for it. And people like MrSniper are simply just too afraid to admit that.

It's not new for colleges to hold separate events for different groups before the main ceremony. It's where students affiliated with "affinity groups" are given their cords & sashes to wear to the main event.

You can send people to college but you can’t make them think.

Was it Moss Hart who said "You can lead a horticulture but you can't make her think"?

I don’t know who said it but it’s hilarious.

Why do you think it is racist?

What an amazing gentleman.