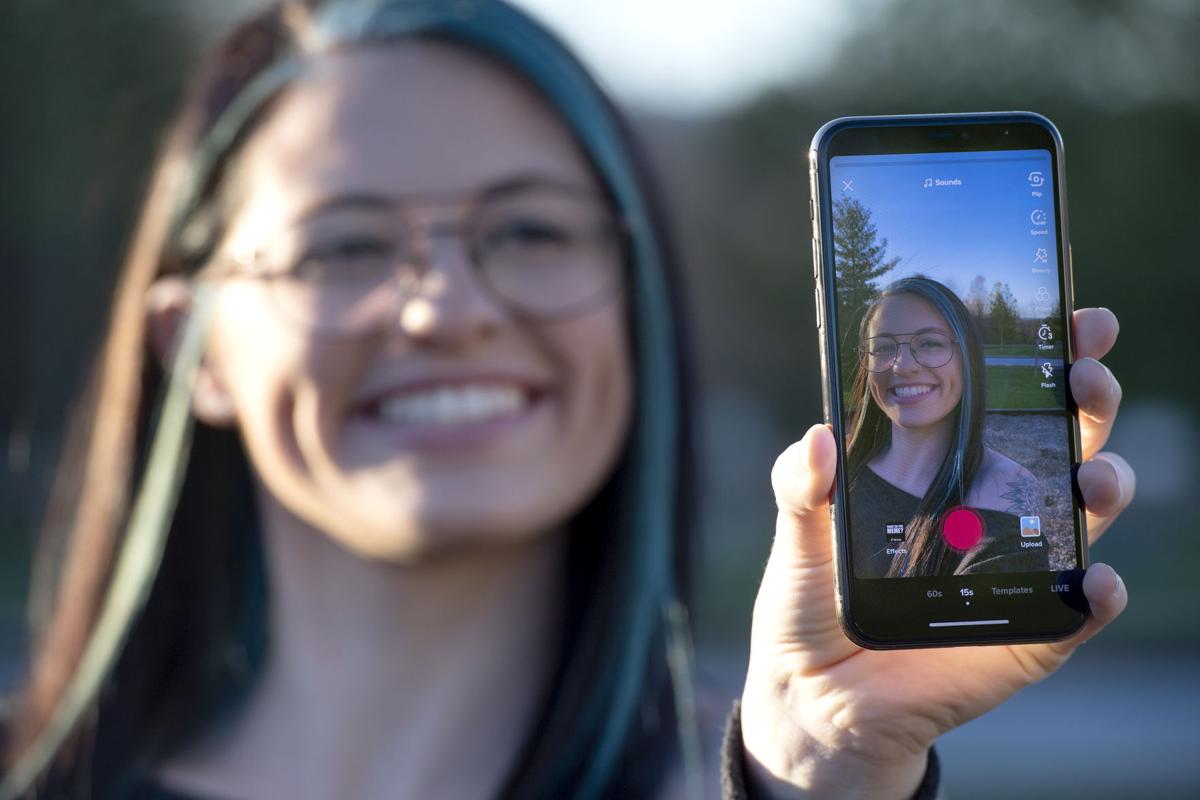 Tabatha Podleiszek, an American Sign Language interpreter, has had a series of TikTok videos aimed at the deaf community go viral, amassing about 20 million views across a handful of brief videos, including one in which she ordered a coffee from Kyle Morris, below, a deaf barista at the Starbucks inside the Target store on Urbana Pike. 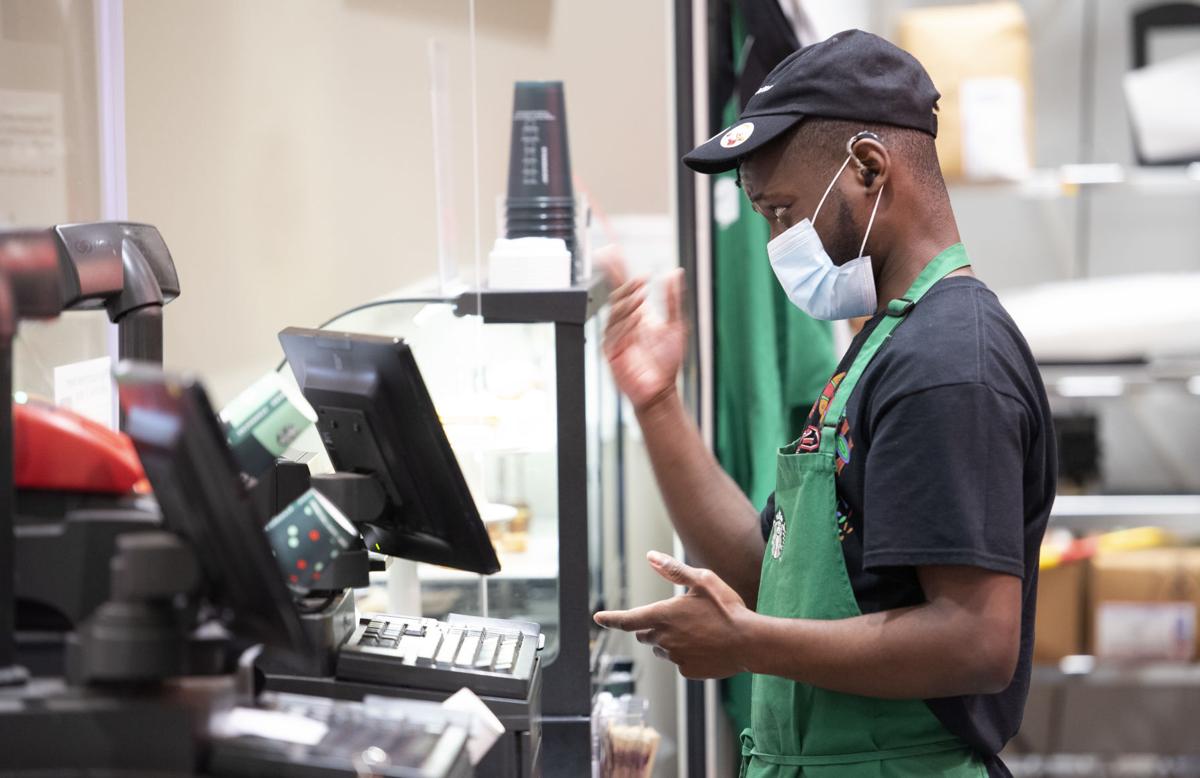 Kyle Morris, a Starbucks barista who is Deaf, takes an order at the cafe inside the Target on Urbana Pike in Frederick. A video of Morris helping a deaf customer recently went viral on TikTok. 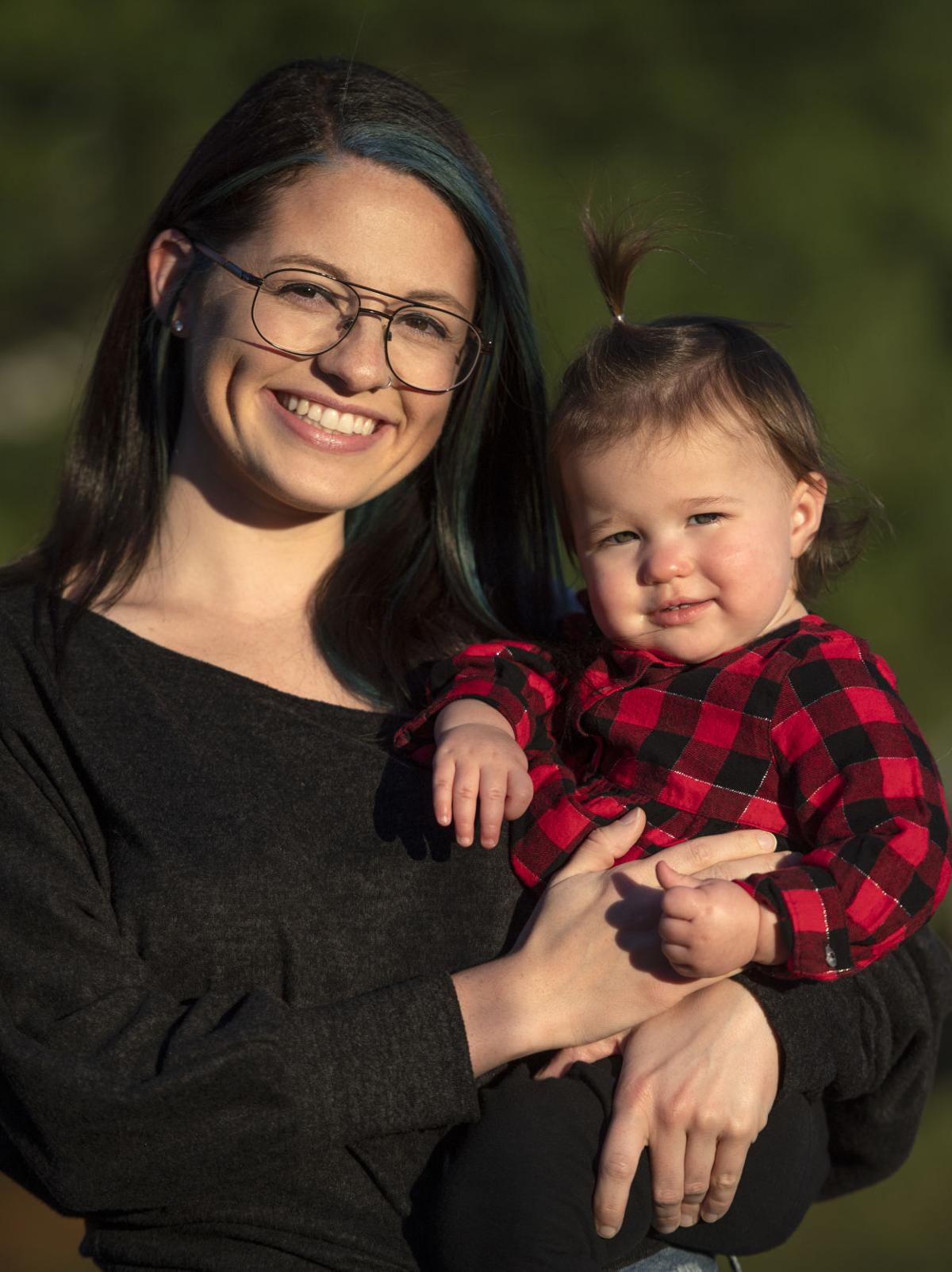 Tabatha Podleiszek, an American Sign Language interpreter, shown with her 1-year-old daughter Haven, has had a series of TikTok videos aimed at the Deaf community go viral. 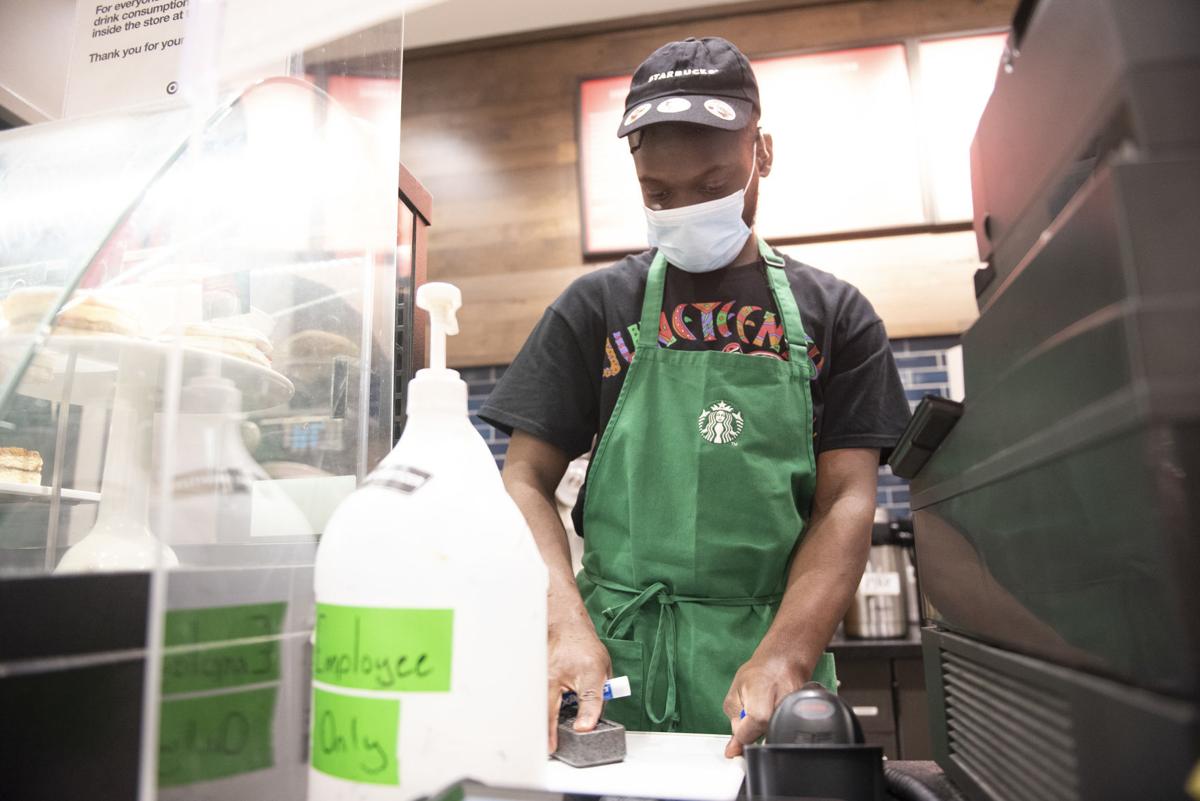 Kyle Morris, a Starbucks barista who is Deaf, wipes clean a dry erase board he uses to communicate with hearing customers. Morris was recently featured in a video that went viral on the social media platform TikTok. The brief video, which has been viewed more than 5 million times, shows Morris’ interaction with a deaf customer, as well as a sign informing customers how to best communicate their order.

Tabatha Podleiszek, an American Sign Language interpreter, has had a series of TikTok videos aimed at the deaf community go viral, amassing about 20 million views across a handful of brief videos, including one in which she ordered a coffee from Kyle Morris, below, a deaf barista at the Starbucks inside the Target store on Urbana Pike.

Kyle Morris, a Starbucks barista who is Deaf, takes an order at the cafe inside the Target on Urbana Pike in Frederick. A video of Morris helping a deaf customer recently went viral on TikTok.

Tabatha Podleiszek didn’t expect to go viral when she downloaded the app TikTok for fun back in the spring. She was simply bored during the beginning of the coronavirus lockdown and wanted to pass the time.

But when she decided to film herself using American Sign Language with her 11-month-old daughter Haven, now 1 year old, going viral is exactly what happened.

Podleiszek is a certified ASL interpreter and a graduate of Gallaudet University. And her boyfriend, Haven’s father, is a CODA — or a child of Deaf adults — so he is also fluent in ASL since it was his first language.

So it makes sense for Podleiszek and her boyfriend to use sign language with Haven, who will need to learn it to communicate with her grandparents. Studies show that babies can understand sign language sooner than they can understand spoken words. Haven can already sign “milk,” “hi,” and “bye,” although she can only say one word vocally. (“Dada,” which Podleiszek called a “shocker.”)

In her first TikTok, Podleiszek signed colors to Haven, who then pointed to a ball of the matching color in response. Podleiszek is shocked that she actually comprehended, and the shock is clear from her joyous expression.

Within a few days, the video had garnered a million views. It now sits at 6.2 million.

Now, Podleiszek has almost 700,000 followers on the app. All of her videos are either in sign language or have captions so they are accessible to the Deaf community.

Highlighting members of the Deaf community and making the app more accessible have become goals of Podleiszek’s now that she has an audience. She never planned on becoming popular on TikTok, so now that it’s happened, she’s trying to make the most of it.

“Even though I do have a family connection to Deaf individuals, I really do my best to duet with other Deaf creators, or I’ll tag Deaf creators in my comments and try to turn the spotlight on them and get them the traction and attention that they deserve as well,” Podleiszek said.

That led her to making a TikTok with Kyle Morris, a Deaf barista at the Starbucks in the Target on Urbana Pike. She first met Morris in 2019, when she was going to Target often with her newborn baby just to have a reason to get out of the house.

“[Morris] saw me, and he immediately asked if I knew sign language, and I don’t know how he even knew, but I did,” she said. “So we started chatting, and then every time I’d go there, we’d have a conversation and chat and stuff like that. But he was never working at the front taking orders.”

Morris, 26, started working up front as a barista more often, and he was able to read lips to take customers’ orders. But that all became much more difficult when the pandemic began.

“But now with the mask, that adds another layer of complexity,” Morris said over a Zoom interview with an interpreter present. “So people need to be a little bit more patient because I can’t read their lips or see their expressions with the mask on.”

So Morris approached the company’s HR about putting a sign out that said that he is Deaf, and asking customers if they can type out their orders on their phones while they wait in line. They agreed it was a good idea and set it up soon thereafter.

When Podleiszek saw the sign on a trip to Target, she was surprised but happy for Morris, as it proved that Deaf employees can really do anything that hearing employees can.

“And it seems like no one has any problem typing. Everyone has their phone in their hand anyway,” Podleiszek said.

Podleiszek’s boyfriend had the idea to film the TikTok showing the sign, and then Podleiszek signing her order to Morris. The TikTok shouts out Starbucks and Target for putting Deaf employees out front, as she says more companies should do.

At first, Morris was surprised when his friends would say he was famous. He’d brush it off.

But now that the video has reached almost 5 million views, he’s noticed a difference in the way customers approach him. More often, they are trying to sign their orders, often using finger-spelling if they do not know the words for the drinks.

“If you’re by yourself and you’re working... and you’re reading lips, you’re a Deaf person trying to fit into the hearing world. But now I feel like the hearing people are trying to join the Deaf world more,” Morris said through an interpreter.

Morris is using TikTok to teach viewers ASL himself, starting with signs related to coffee so people can learn how to order from a Deaf barista. He said he watches a decent amount of TikTok, especially from Black Deaf creators. Black ASL is a bit different from typical ASL, he said, with different idiosyncrasies.

Morris was born to a hearing family, as about 90 percent of Deaf people are, according to the National Institute on Deafness and Other Communication Disorders. His family doesn’t know sign language, so he usually finds himself communicating with them when he has his hearing aids on and can lip-read and speak. But again, it feels like just trying to fit in a hearing world.

“It can be very frustrating at times, and that’s why I’m happy that at least at work, the tables are starting to shift ... and the hearing people are starting to join into the Deaf world and learn sign language and communicate.”

While Podleiszek covers a wide range of topics on her TikTok page besides ASL, such as being a survivor of trauma, she wants to keep her focus on highlighting other members of the Deaf community, so people can learn ASL from Deaf creators and learn more about the Deaf world.

“It’s their language, and they’re the experts, and their work is beautiful,” Podleiszek said. “... That’s my goal, is to turn the spotlight on them. It’s their time to shine.”

Aw. This took me back. I had had several semesters of ASL and it was fresh in my mind when we traveled to China to adopt, 1996. Our baby had no toys but had substituted her fingers and at ten months was amazingly dextrous and intense about it to where we were shut out. I wanted eye contact and got into her face practicing the alphabet, spelling her name and she was soon watching and laughing. Whenever she would drift back into her finger world I would encourage her to interact this way. ASL was our first shared language that facilitated her connection to a scary stranger during a very traumatic time in her life. I never claimed to be great at it, I just like languages. We have movies too of me crouched over a baby pretty much competing in a finger gymnastics contest. She objected quite vociferously at that time to being touched, we attempted that in small doses, so ASL quite literally introduced us. In fact yesterday was our Family Day - we adopted her on Thanksgiving Day 1996. She got a covid test, isolated and came home. She has her Masters in Psych and is doing her practicum in MD for school Psych, working with children who have challenges. Thank you for reading. I do go on.

Great story! I will look them both up on TikTok. I love that they are using the platform for something so meaningful and good.

I second that, and it makes me want to learn ASL.