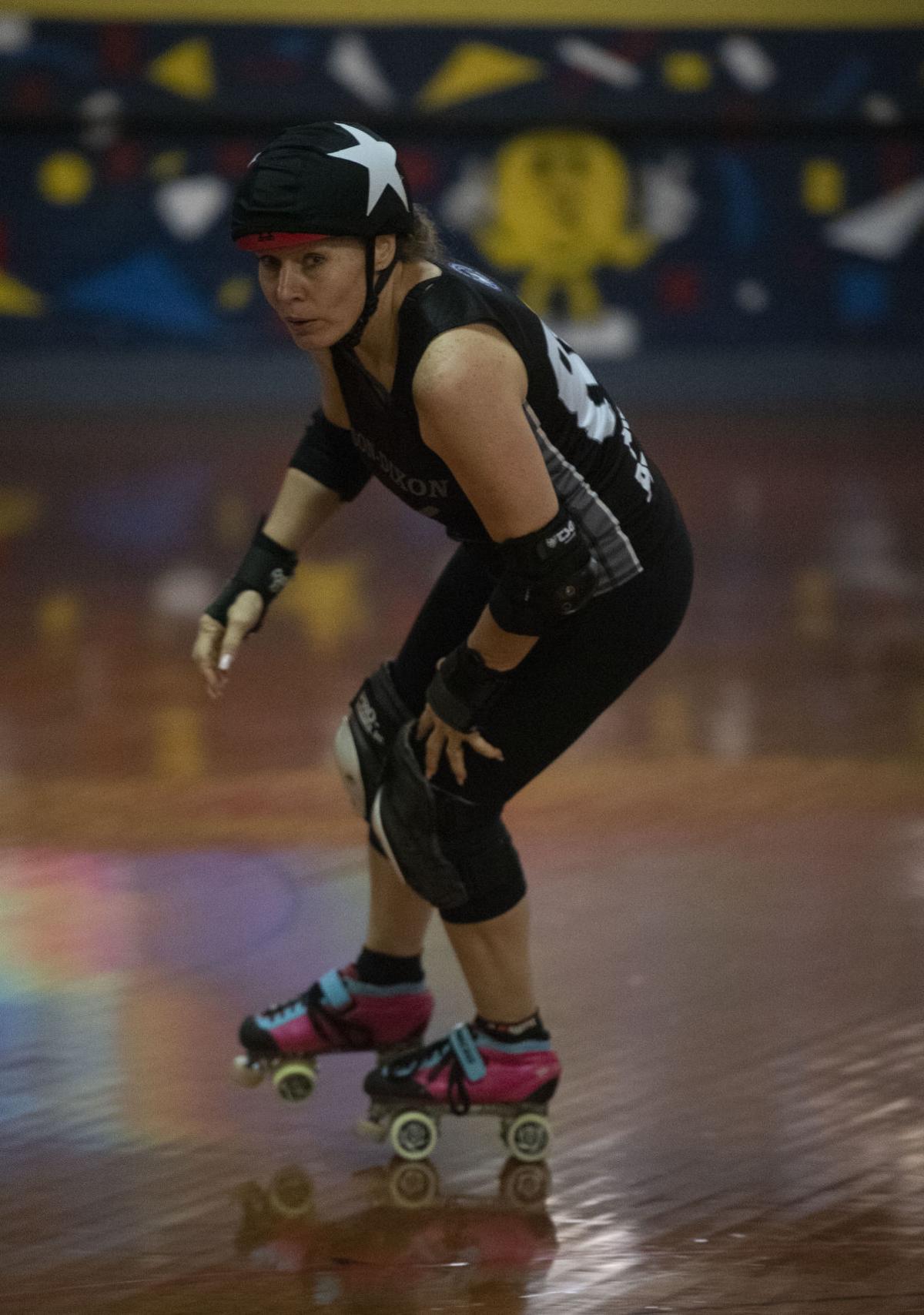 Patty Leazier has been roller skating competitively since she was 10. A brief stint in artistic skate classes ended when Leazier discovered speed skating and never looked back. 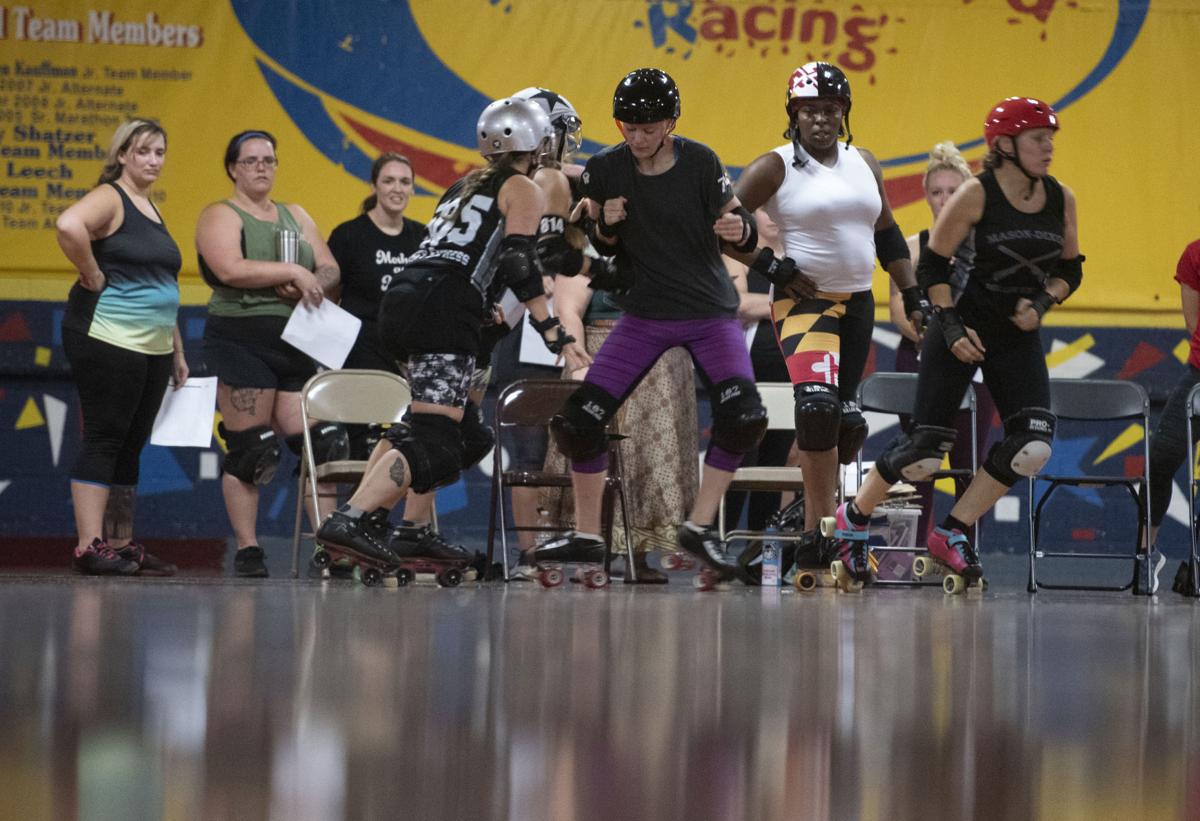 Patty Leazier has been roller skating competitively since she was 10. A brief stint in artistic skate classes ended when Leazier discovered speed skating and never looked back.

Patty Leazier was 10 years old when her mother finally agreed to let her roller skate competitively. But once she got started, she really got started. A brief stint in artistic skate classes ended when Leazier discovered speed skating and never looked back. Now, at 51, she still holds some national records — the 200-meter dash, for example, and a couple of relays that have since been phased out of official competitions.

Her introduction to roller derby came a little more than 10 years ago, when she still owned I Skate 81 in Greencastle, Pennsylvania. A woman called the rink and asked if she would help start a local derby team. Leazier had never played the sport, but she thought it was a great idea. She eventually sold I Skate and bought Turner’s Skate Palace in Hagerstown, but the team — the Mason-Dixon Roller Vixens — moved with her.

Leazier joined just four weeks after she gave birth to her youngest daughter, Piper, playing off and on for a few years before, in her words, she “really got serious.” In 2014, she started commuting to Baltimore to skate with the Charm City Roller Girls, then one of the highest ranked derby teams in the world. She drove an hour and a half each way, multiple times a week, to attend practices, which she said were so intense that players would occasionally throw up after drills.

“You’d start off doing laps around the rink, just as hard and as fast as you could go, and by the end you’d be dry heaving,” Leazier said. “Everything was very detailed. We jumped ropes, we did plyometrics, we would go out in the parking lot and run laps. Derby is a physical sport, and you have to be very physically engaged to be good at it.”

The goal, for Leazier at least, was to try out for Team USA — the national team governed by USA Roller Sports (USARS), which in turn falls under the umbrella of World Skate and the International Olympic Committee.

Now, roller derby has more than one international championship. Specifically, there’s some competition (and more than a little animus) between USARS and WFTDA, otherwise known as Women’s Flat Track Derby Association. WFTDA is bigger, and the rules of play are a little different between both organizations, but USARS derby is generally considered to be more exciting both to watch and to play, Leazier said. And for some skaters, at least, USARS carries an aura of officialism.

“We’re the only ones where you can wear the Team USA jacket and have the Olympic rings tied to it,” said Eric Steele, the executive director of USARS. “And that means something to me. I think it puts high-end professionalism to what we’re doing. And it means we’re representing our country in high-level competition.”

Leazier made the USARS team in 2016 and skated for Team USA when they won gold in the first-ever World Skate Roller Derby World Championships, held that year in Nanjing, China. She was the oldest player on the team, which competed that year against national teams from Australia, Spain, and Japan.

At home, she’s since switched back to the Mason-Dixon Roller Vixens, where she skates under the derby name Poison Princess. But she’s still trying to promote USARS derby in Hagerstown and, by extension, the United States, where the vast majority of teams — including the Roller Vixens — play under WFTDA. This year, she’s convinced USARS to hold the third tryout session for Team USA at Turner’s Skate Palace, where Leazier plans to audition, again, for a place on the team. It’s the first time that a national tryout has been held on the East Coast, Leazier said, a fact Steele said should be taken as gospel.

“At least officially, a lot of the governance for derby has always been concentrated on the West Coast,” Steele said. “So it is exciting to see these opportunities expanded to more players across the country.”

At a practice last Thursday, Leazier was busy convincing her own teammates to try out for the national team as they changed into helmets and neon-colored knee pads. Membership in roller derby, both WFTDA and USARS, is growing across the United States, and Hagerstown is no exception. This fall, there were at least 15 women in the Roller Vixens “freshie” class — a big jump from the four or five players who usually join the team at the start of each new session. Turner recently launched a youth league, and now has younger members who come from as far away as White Marsh or Northern Virginia to play roller sports competitively.

Players even drive to compete with the Roller Vixens, a regional team whose members extend beyond Washington and Frederick counties. Emmy Johnson, better known by her derby name, “Bang Bang,” drives an hour and a half to Hagerstown from Bedford, Pennsylvania, three times a week to play with the team, which “is like a family to me now,” Johnson said.

Given the sport’s popularity, Steele doesn’t think it’s impossible — though it might not be probable — for derby to eventually enter the Olympic games. After all, there’s serious talk that e-sports might make its way to the 2028 summer games in Los Angeles. And if video games might eventually be counted as an Olympic sport, what’s to stop roller derby? Especially given the fact that USARS is campaigning to enter other roller sports into the games.

“Derby is this hidden gem that I don’t think a lot of people know about,” Steele said. “But it’s growing, and it’s growing exponentially with players who are looking to be more and more competitive.”