One of the Claire McCardell dresses on display at the Historical Society of Frederick County. This is a strapless cotton day dress from the 1940s made of textured weave cotton. 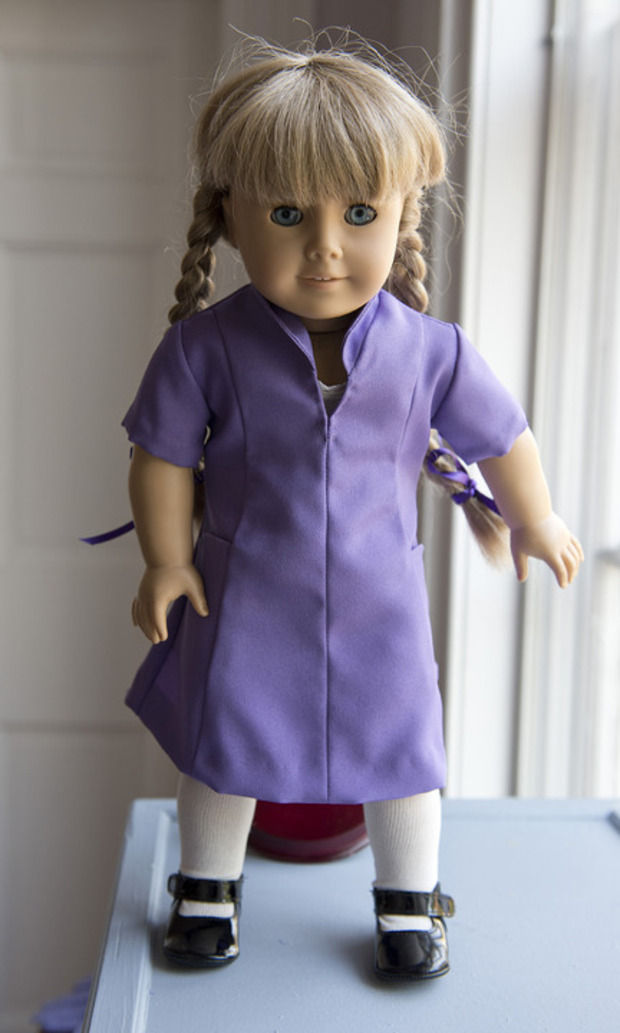 This doll is wearing a miniature version of the 1950 Clair McCardell purple day dress. The doll is part of the National Daughters of the American Revolution 2015 National Junior Doll Project: 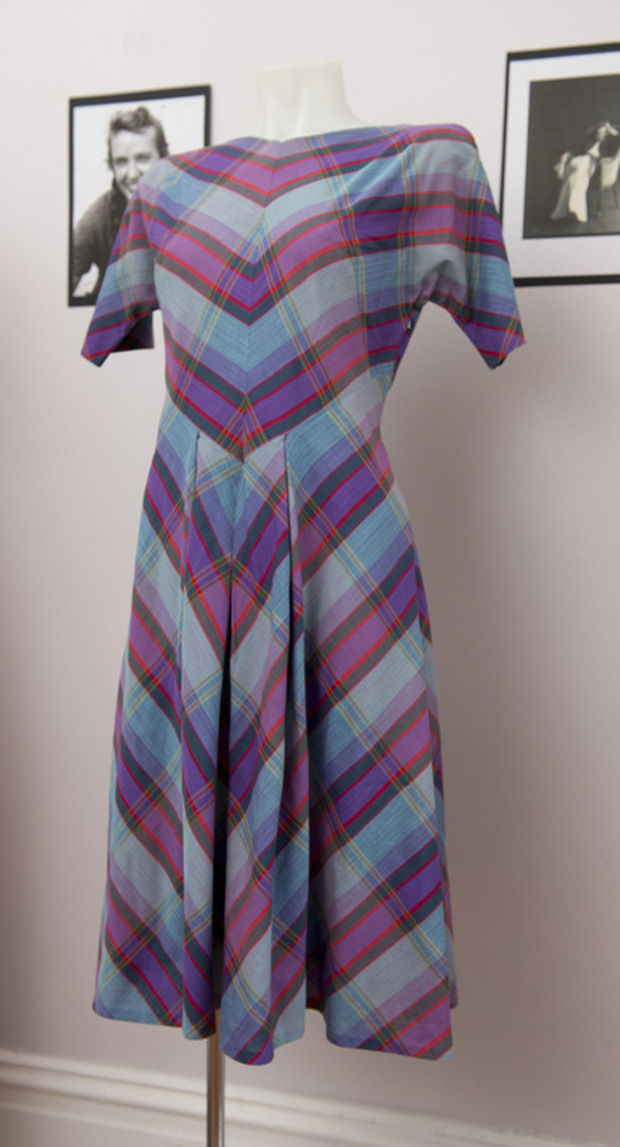 A plaid day dress from the 1940s made with what was then new synthetic material.

Staff photos by Bill Green This is the actual 1950 Clair McCardell purple day dress that inspired the doll's dress.

Peach day dress 1950. The label inside reads "Clair McCardell Cloths by Townley," where the Frederick native began work in 1931.

One of the Claire McCardell dresses on display at the Historical Society of Frederick County. This is a strapless cotton day dress from the 1940s made of textured weave cotton.

This doll is wearing a miniature version of the 1950 Clair McCardell purple day dress. The doll is part of the National Daughters of the American Revolution 2015 National Junior Doll Project:

A plaid day dress from the 1940s made with what was then new synthetic material.

Staff photos by Bill Green This is the actual 1950 Clair McCardell purple day dress that inspired the doll's dress.

Peach day dress 1950. The label inside reads "Clair McCardell Cloths by Townley," where the Frederick native began work in 1931.

Pedal pushers, the side zipper, and women’s separates, all staples of American fashion lexicon, all came about because of a mid-20th century fashion trailblazer who also happened to be a Frederick native. Her name was Claire McCardell, and some of her work is on display at the Historical Society of Frederick County through Nov. 16.

“Claire McCardell designed and mass produced clothes for comfort and functionality that were affordable to the average woman. She created women’s sportswear and ready-to-wear fashions that you could buy off the rack. This was at a time when many women made their own clothes, or had them made for them if they were wealthy,” said Liz Deering of the Carrollton Manor Chapter of the National Society of Daughters of the American Revolution. The DAR partnered with the Historical Society to bring the McCardell exhibit to the public.

Among the pieces in the small collection is a simple, strapless cotton gown. There’s a purple “day dress” made of breathable linen and rayon, which was then a brand new fabric that draped comfortably around the body.

One of the displayed items that really pops is a 1940s plaid garment of vibrant blues and reds. Plaids actually became one of McCardell’s signatures.

“She would cut on the bias, meaning on an angle. So you see plaid pieces coming to a ‘V.’ It was just something different. And it was a clean, simple look, which is what she was after,” said Deering.

Functionality was key, too, which is what the pockets she stitched on to her garments were about — and it was from this functionality concept that her side zipper came to be.

“She incorporated the zipper so that women wouldn’t need to have a man or some other person zip her up,” said Deering, adding that much of McCardell’s designs came from her own frustrations with the clothes in her drawers. She incorporated the hood into jackets after she went skiing and nearly froze.

You will find no corsets or shoulder pads in this exhibit, or in any of her work, despite that they were staples in European design when McCardell came on line with her own ideas. These structural features changed the appearance of a woman’s body. But McCardell made clothes to show and accommodate women’s natural shapes, and to allow them to move freely, like draw string necklines and short sleeves.

By the time retailers around the country were carrying her casual but refined lines, the media began calling her the designer who spun the “American Look.” It was a trend that caught the eye of Time Magazine who featured her on its cover in 1955.

The large-scale notoriety would not be overlooked locally.

Though Rebecca Cain lives in Frederick and is an amateur seamstress, she had not heard of the local fashion legend until she read about the exhibit.

“I try and learn what I can about fashion designers. And when I heard about Claire McCardell, I was especially curious. I think it’s great that someone from a small town went somewhere,” said Cain, who takes private sewing lessons.

“Typically, if you’re going to get big in fashion, you go to New York or California to do it,” she said.

Deering is happy to see the public funnel in to check out the exhibit.

“We entered this partnership with the Historical Society to be able to share this collection that they had procured,” she said.

“Also, we thought it would be nice to have a downsized version of one of the dresses to raffle at DAR’s National Junior Doll project, to support DAR’s nonpublic schools for underprivileged children.”

“Ms. Suzy,” the doll made for DAR by the American Girl Company, stands not far from the displayed purple day dress, wearing a miniature of the same garment. The doll and dress will be raffled at the upcoming DAR event.

The dresses are on display at the Museum of the Historical Society of Frederick County, 24 E. Church St., Frederick, through Nov. 16. The museum is open Tuesday through Saturday, 10 a.m.-4 p.m., and until 8 p.m. on Thursday. It is open Sunday, 1-4 p.m. To learn more about the Claire McCardell display, visit facebook.com/CarrolltonManorChapterDar or call 301-663-1188.