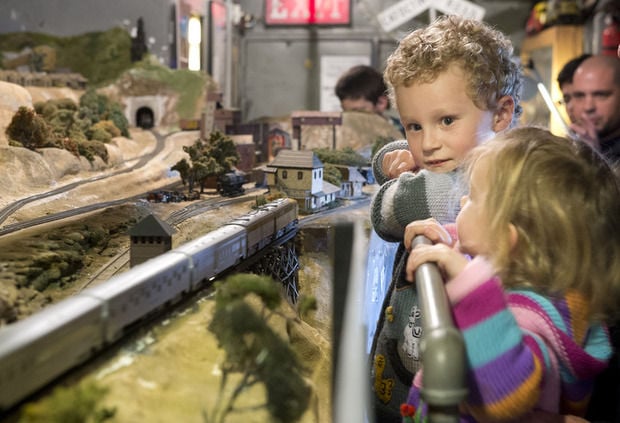 David Vance, 5, and sister Brenna, 2, of Frederick watch a model train pass during an open house at the Frederick County Society of Model Engineers Sunday in Frederick. Staff photo by Graham Cullen 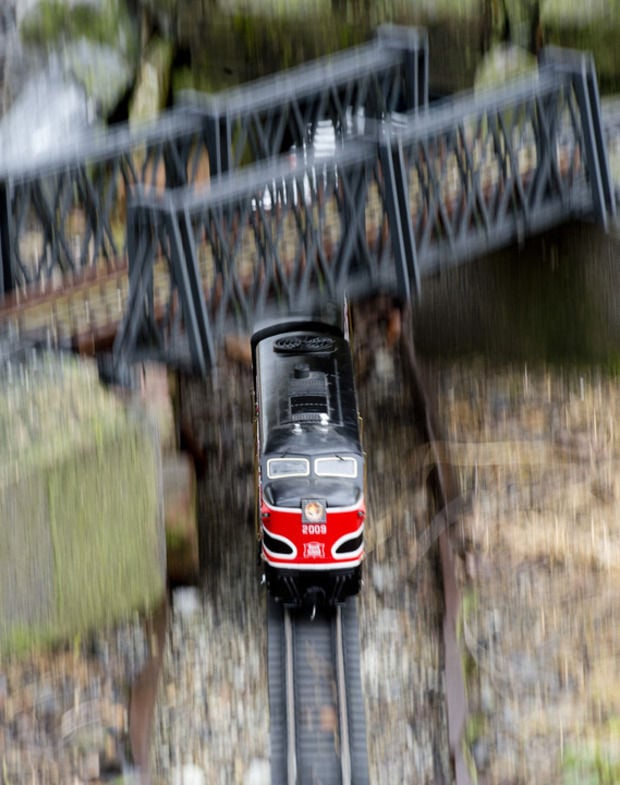 A model train passes under a bridge on a track built outside the Frederick County Society of Model Engineers indoor model on E. Patrick Street. Staff photo by Graham Cullen

David Vance, 5, and sister Brenna, 2, of Frederick watch a model train pass during an open house at the Frederick County Society of Model Engineers Sunday in Frederick. Staff photo by Graham Cullen

A model train passes under a bridge on a track built outside the Frederick County Society of Model Engineers indoor model on E. Patrick Street. Staff photo by Graham Cullen

In the fictional town of Franklin, residents are soon to get new buildings with working electrical lights and a marquee sign for their local theater.

The village, loosely based on Frederick in the 1950s, figures prominently in the 56-foot railroad layout developed over decades by the Frederick County Society of Model Engineers. Every so often, visitors enjoy the chance to check out the continued evolution of the tiny world.

On the first Sunday of each year, the society holds open houses at their headquarters, a decommissioned rail car that formerly ferried horses from place to place. This weekend, children and adults alike lined the layout, mesmerized by the clacking trains circling the tracks.

John Schroyer, 15, said he has been coming to the open house on East Patrick Street every year since he was a child.

“I could be here forever,” he said.

His mother, Debbie Schroyer of Frederick, said she first noticed John’s interest in trains when he was a toddler with an appreciation for Thomas the Tank Engine.

The love for model trains never left him, and he is currently working on a layout in a downstairs room of his house, she said.

Schroyer said she always appreciates visiting the Frederick open house with her son, adding that the layout includes some minor changes from year to year.

On Sunday, society members kept watch over the trains as they wound across the layout, working to avert disastrous collisions or put wayward cars back on the rails. Today’s model trains are much more sophisticated than the versions Bethke enjoyed as a child, he said. Now, the trains contain computer chips so they’re easier to control, he said.

Club member Bob Embrey said he remembers playing as a boy with train sets that weren’t even scaled properly. The layout that the society created is much more intricate and realistic, he said.

It even includes one suspiciously familiar train car that sits off the rails on a patch of grass, as tiny visitors climb a wooden staircase to enter it; society members thought it would be fun if their layout included a model of the society headquarters itself.

“If you look out the windows, you see yourself looking in,” Embrey quipped.