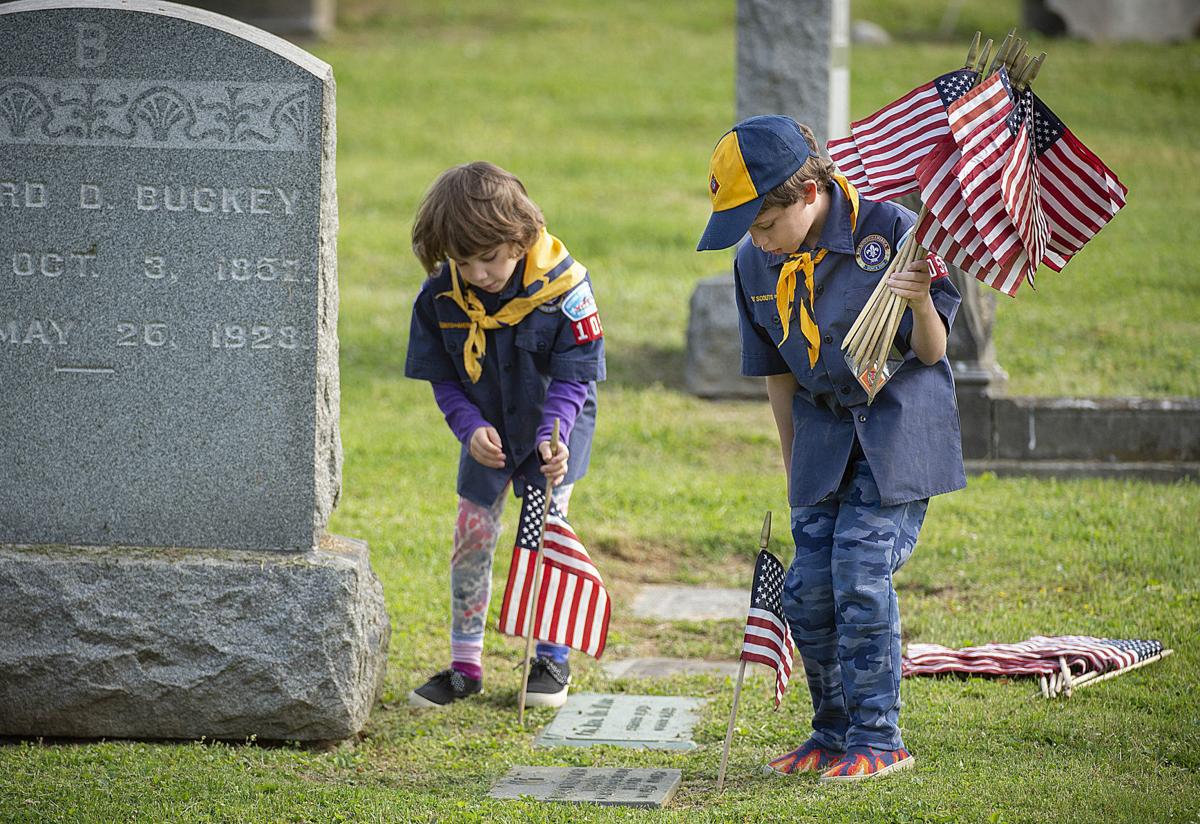 Cub Scout Veronica Gary, 6, places a flag on a veteran’s grave and carries a bundle of American flags in Mount Olivet Cemetery Saturday morning. She and her family volunteered for the second year helping the American Legion Post place nearly 7,000 flags on veterans graves. 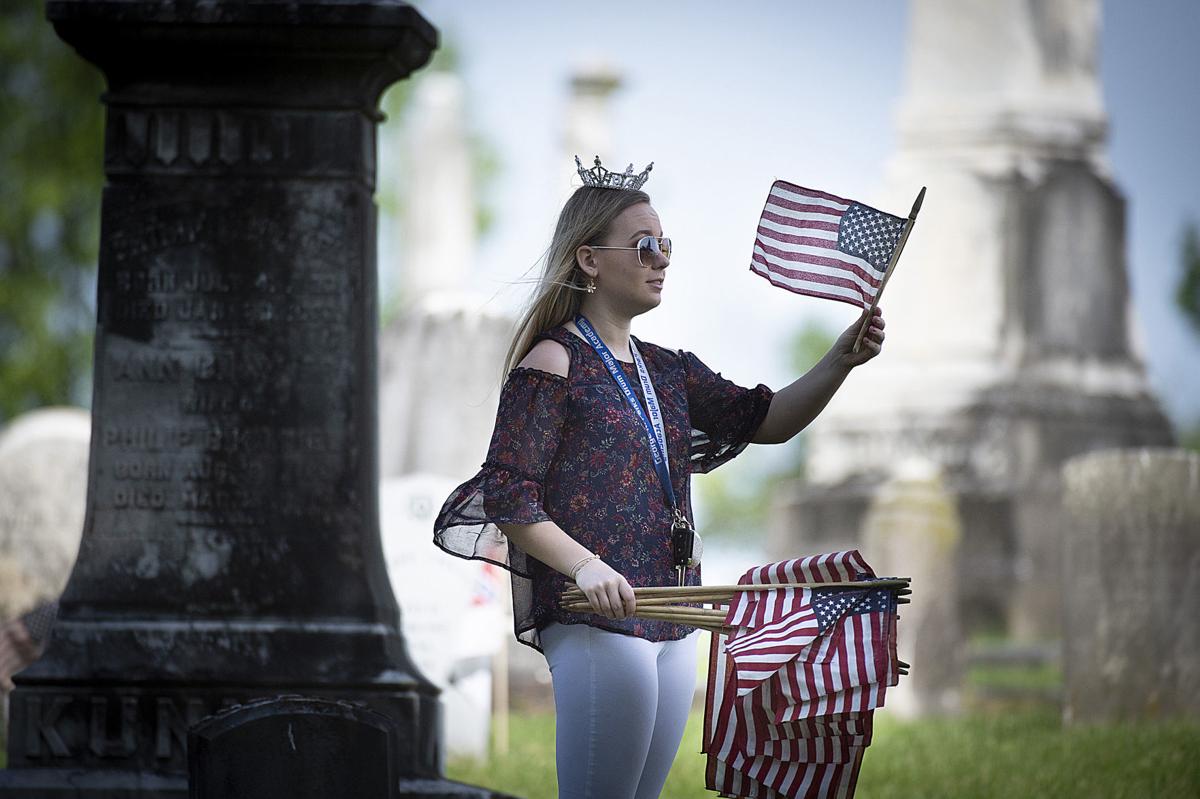 Cub Scout Veronica Gary, 6, places a flag on a veteran’s grave and carries a bundle of American flags in Mount Olivet Cemetery Saturday morning. She and her family volunteered for the second year helping the American Legion Post place nearly 7,000 flags on veterans graves.

Just like every year, members of the American Legion Post 11 gathered at Mount Olivet Cemetery in Frederick to place American flags on the graves of all veterans on Saturday morning.

But unlike other years, the event was not attended by the Boy Scouts of America, Junior ROTC or many of the Post’s partner organizations. Keith Clevenger said many extracurricular activities are not meeting at all while schools are closed.

Still, some players from the American Legion’s junior and senior baseball teams came out to help. Dan Herche, who helps coach the senior team, explained that with this year’s baseball season being canceled, many of the student players were looking to get together again.

Usually, he said, about 30 players come to help place flags in the cemetery. On Saturday, only about five players, those who have played in years prior and would have played this year as well, showed up.

Tryouts, which are usually held around Easter, had been canceled.

“I miss the kids,” Herche said. “It’s probably not as hard for me as it is for them.”

Bernie Palmer came to the event for the first time this year, after joining the American Legion about a year ago. As a U.S. Air Force veteran, it was important for him to show respect to those who served and died. It was a particularly emotional day for him.

“It brings up a lot of memories, a lot of friends I lost in Vietnam,” Palmer said.

The Legion places over 7,000 flags every year, most of which are reused from the year prior. Without being able to meet as a large group, Clevenger and his wife Jami took it upon themselves to clean most of the flags themselves.

“It’s not a one-person effort, it takes a lot of us to do this,” Clevenger said. “We’ve taken the older flags and properly disposed of and cleaned and got the thousands of flags ready to be able to use this year.”

The flags are usually placed the weekend before Memorial Day ahead of the large service held in Mount Olivet Cemetery, which draws around 200 people every year, Clevenger said. But this year, the service won’t be happening for the first time in recent memory.

“It’s just a bummer this year we’re not going to have a memorial day service because of the COVID-19, but we’ll do hopefully some sort of virtual thing but we would still like to be able to do some of the flags at the services,” Clevenger said.

The flags typically stay in the cemetery until Flag Day, June 14. Clevenger hopes they’ll be able to meet with more people by that time.

This year was also the first time the event was held without Bryan Hissey, former commander of the Post, who passed away earlier this year. t’s important to Clevenger to keep the project going every year, even in uncertain times, now that Hissey is gone.

What are those flags doing laying on the ground? I thought the scouts taught respect for the flag and the flag code.

I wish I had known about this so I could help. I placed wreaths on gravesites last year. Very sobering to see how many Fredericktonians serve our country.

Join the legion. I was part of the group at St John's cemetery. It was a great day to be out

Funny only showing pictures of the same scouts and not any of the members. I placed flags then went home and placed 59 more on the Veterans graves in the two cemeteries in my town. It’s the least I can do to show respect for fellow vets that have passed. But like Bosco said..cute kids but need to teach them flag etiquette.

I will have to assume she was having problems holding all the flags like in the second photo and putting the one flag into the ground. She is 6 after all.

An after note since I can't add to my comment. The flagstick is bent and clearly having problems pushing it into the ground.

No adult scout leaders around? Who signed the release for publishing photos of minors? I ascribe it to ignorance of the US flag code

The family was there and the kids decided to wear their Scout uniforms. Bill Green is an excellent photographer and would have asked the parents permission for both the photos and names before publishing in the paper.

Tom, that tells me that Bill Green and the parents are all ignorant of the US flag code then. When you compose a shot, a good photographer checks the background and he should've seen the flags laying on the ground. Just sayin'. [smile]