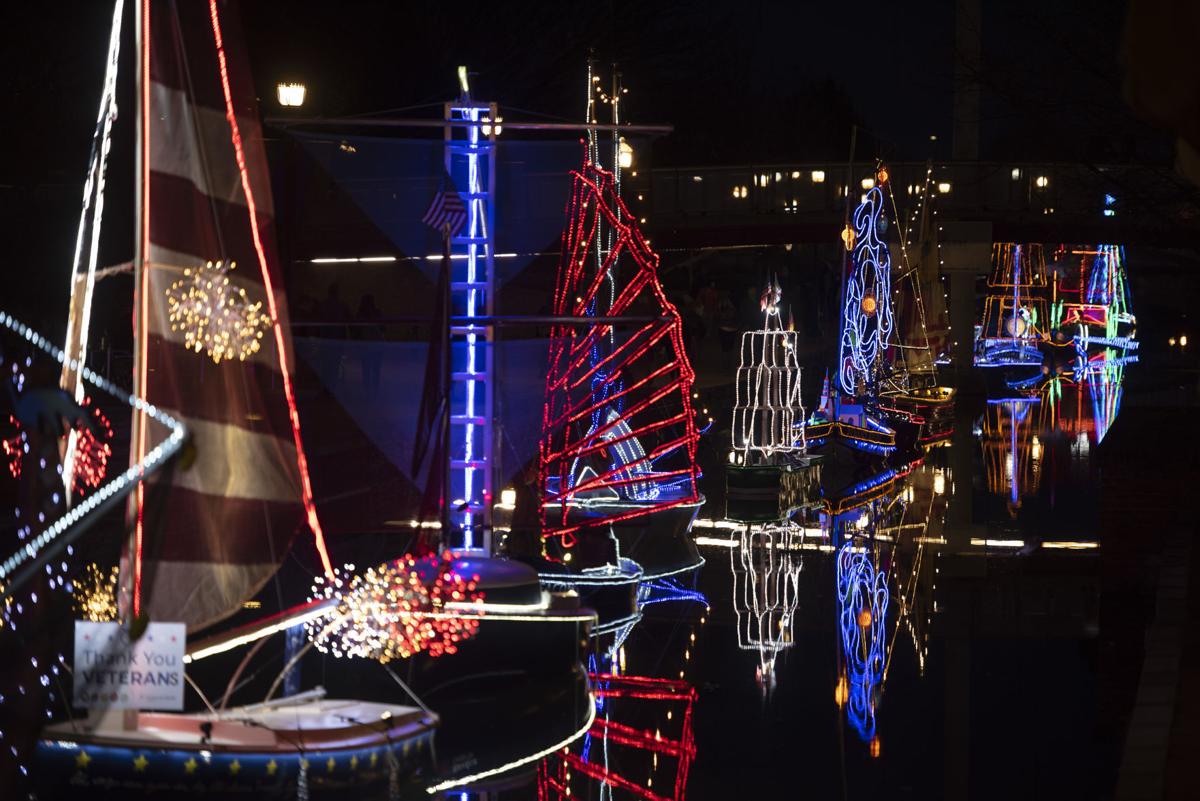 The boats installed in Carroll Creek for Sailing Through the Winter Solstice are shown illuminated on the first night of the event, which runs through the first week of February. 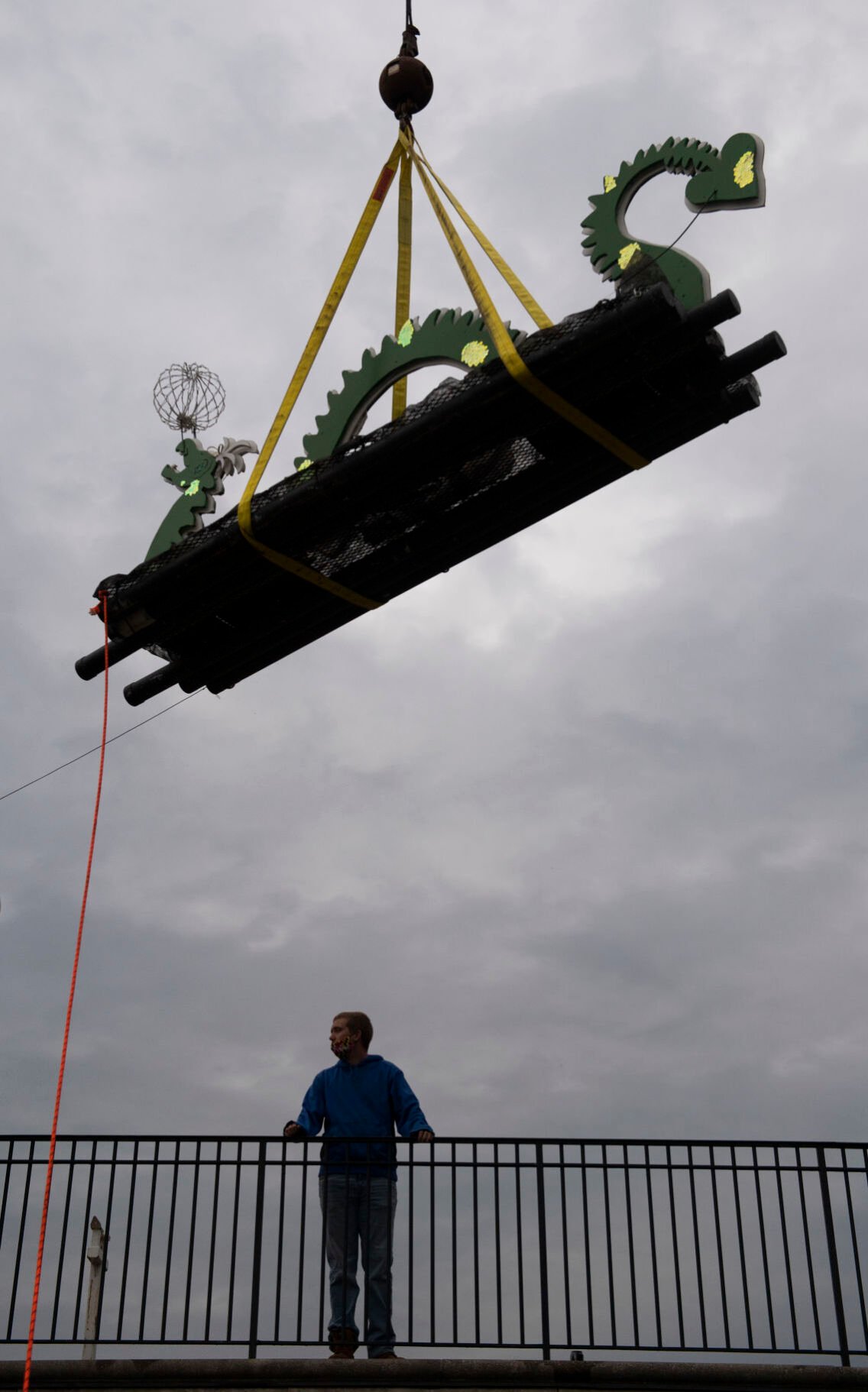 A volunteer watches as a section of the Snallygaster boat entry is lowered from S. Carroll Street bridge to Carroll Creek Saturday morning during the installation of Sailing Through the Winter Solstice. 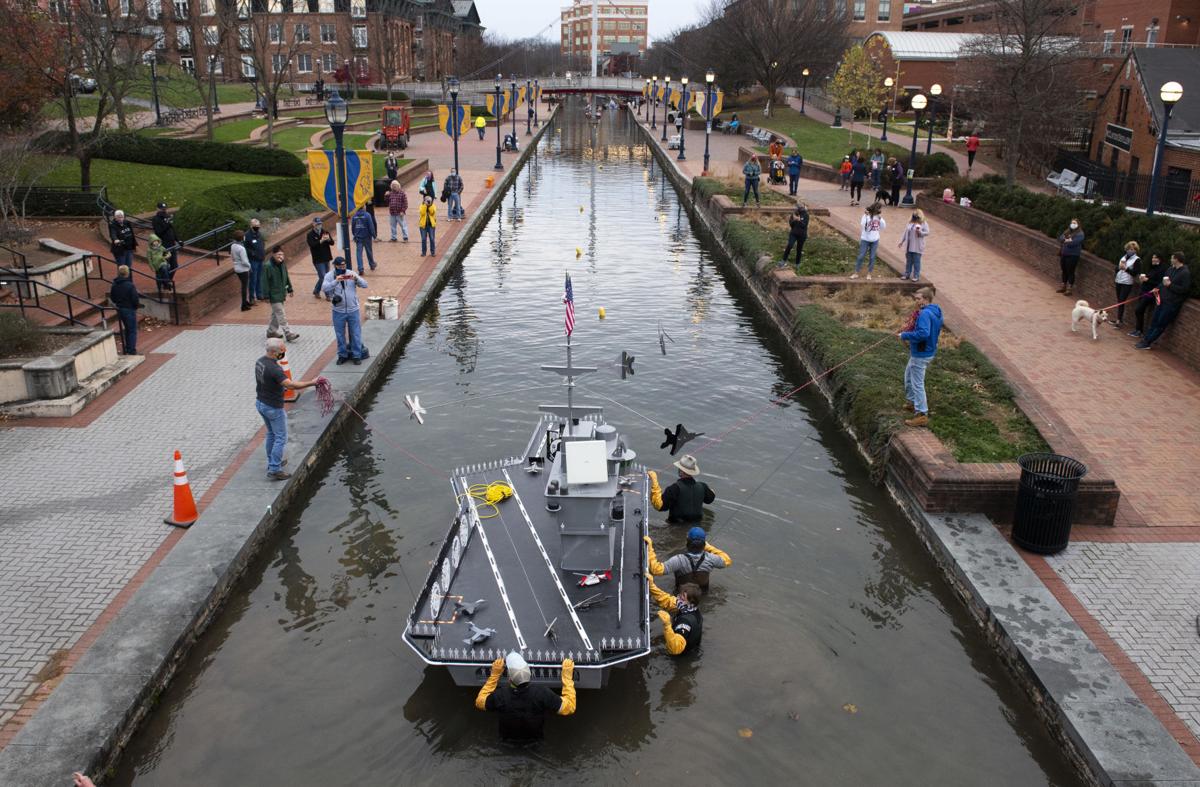 Volunteers pull a boat decorated to look like an aircraft carrier to its position in Carroll Creek Saturday morning after being lowered by a boom crane truck above on S. Carroll Street. 20 boats were secured in the Creek for Sailing Through the Winter Solstice display, which runs through the first weekend in February. 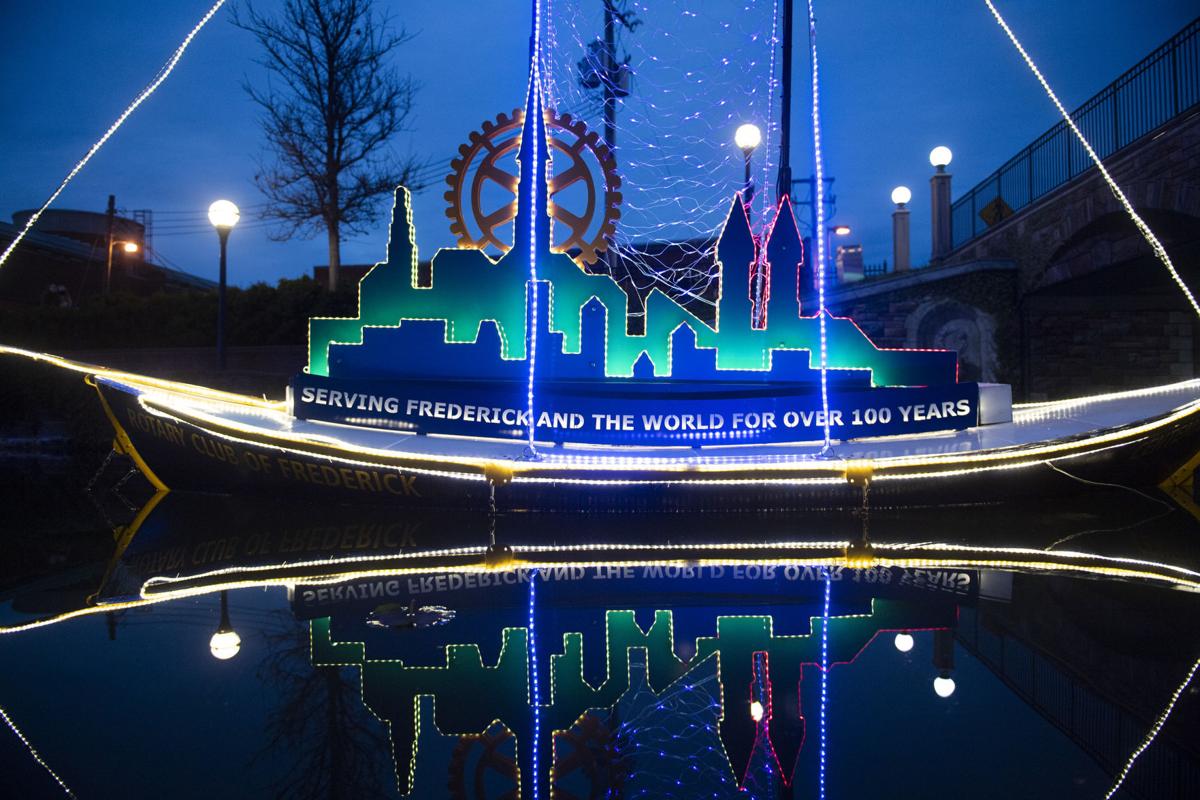 The Rotary Club of Carroll Creek boat is shown at dusk on Saturday evening on the first day of Sailing Through the Winter Solstice. 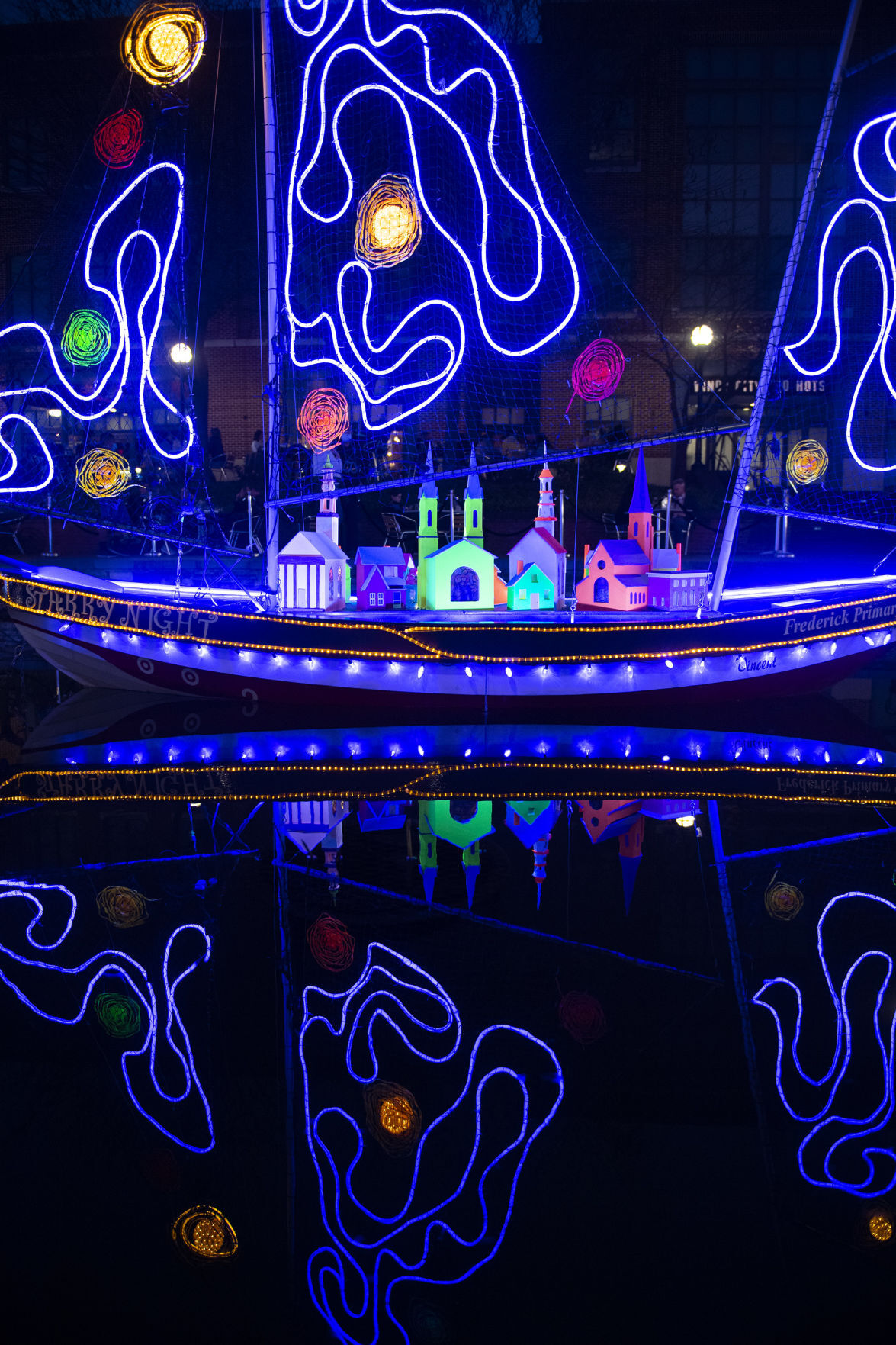 The Starry Night boat is shown Saturday evening, the first night of the Sailing Through the Winter Solstice event on Carroll Creek in Frederick. 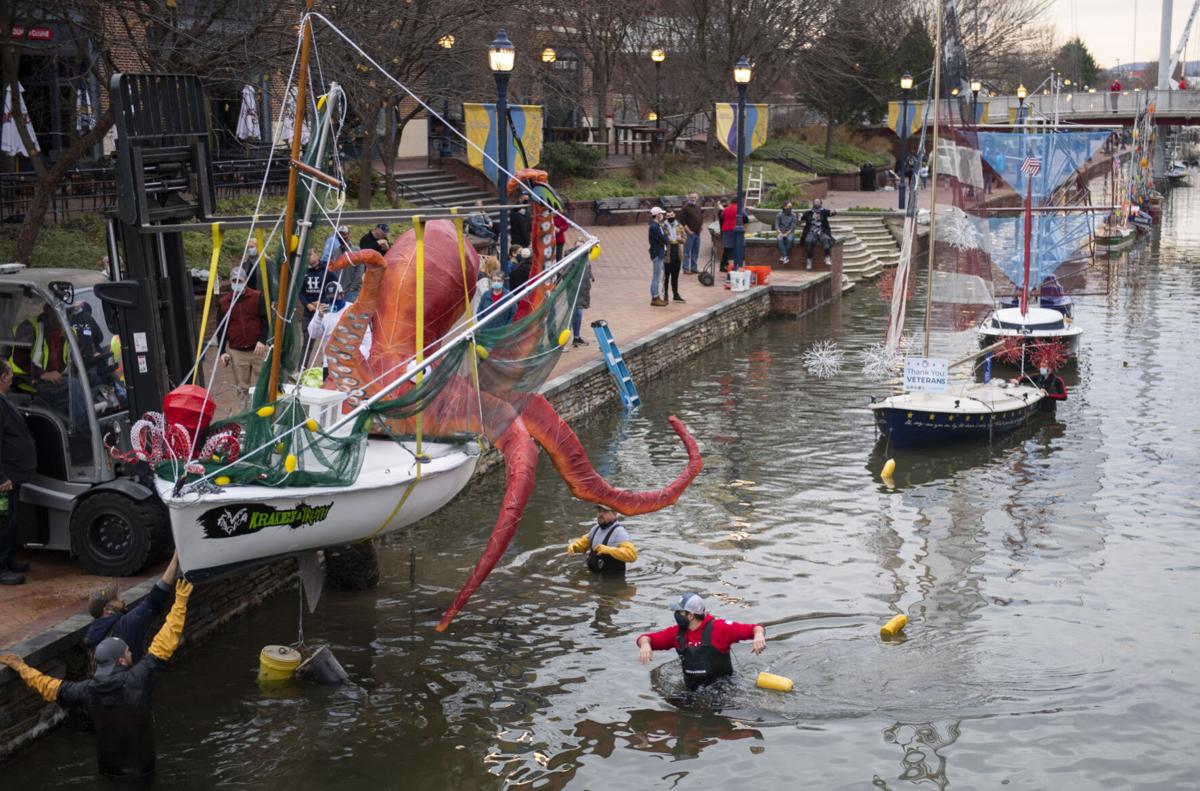 Volunteers work to lower a boat into Carroll Creek Saturday morning for the Sailing Through the Winter Solstice event. 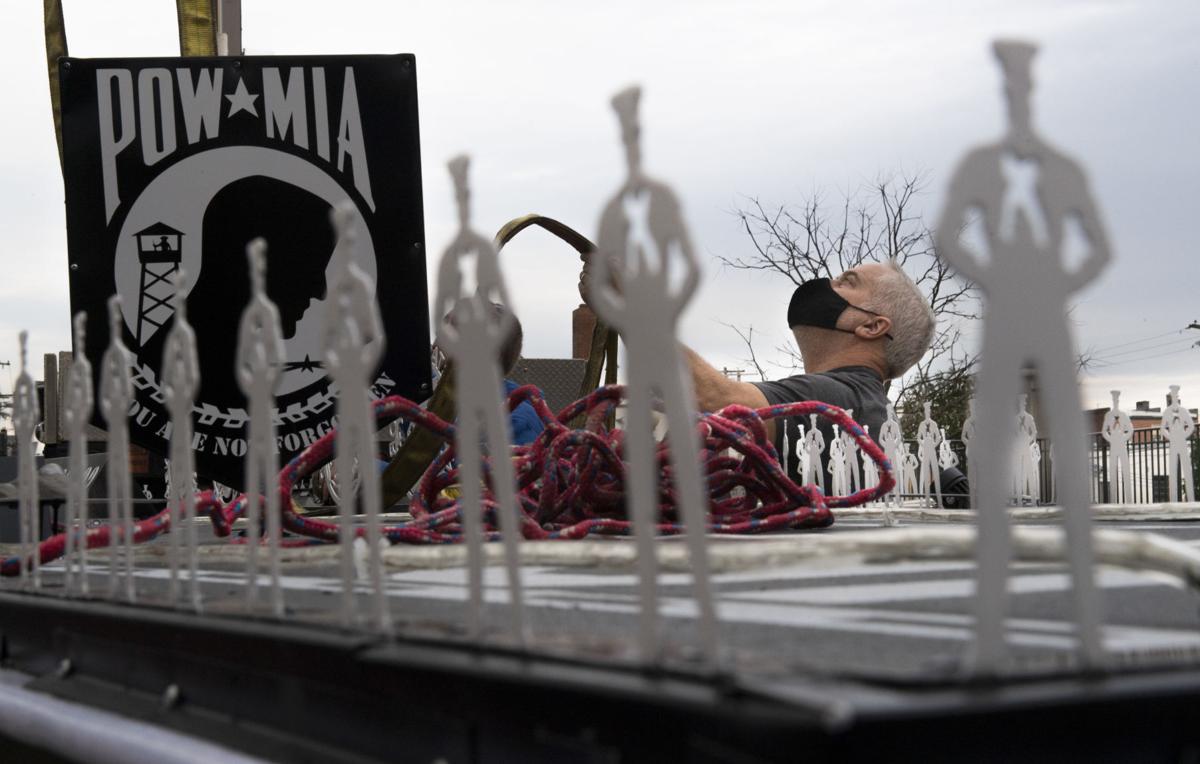 A volunteer helps secure a rope from a boom crane to a boat designed to look like an aircraft carrier Saturday during the installation of 20 boats for Sailing Through the Winter Solstice in Carroll Creek in downtown Frederick.

The boats installed in Carroll Creek for Sailing Through the Winter Solstice are shown illuminated on the first night of the event, which runs through the first week of February.

A volunteer watches as a section of the Snallygaster boat entry is lowered from S. Carroll Street bridge to Carroll Creek Saturday morning during the installation of Sailing Through the Winter Solstice.

The Starry Night boat is shown Saturday evening, the first night of the Sailing Through the Winter Solstice event on Carroll Creek in Frederick.

Volunteers work to lower a boat into Carroll Creek Saturday morning for the Sailing Through the Winter Solstice event.

As families strolled along Carroll Creek Saturday morning, Jim Dronenberg was serenading passers-by from atop the suspension bridge with his harp. That delicate music was muffled by the sound of a nearby forklift lowering a series of small, ornately designed boats into the shallow water below.

The vessels being anchored in the creek are part of Sailing Through the Winter Solstice, which has quickly become a mainstay in Frederick.

Now in its fifth year, the event draws visitors to downtown during the less-than-hospitable winter months and at the same time raises money for local nonprofit charities.

“A lot of cities have a parade of lights,” said Peter Kremers, who co-founded and is chairman of the event. “But that’s just usually one day.”

“There’s nothing like this that goes on for 10 weeks that I’m aware of,” he said. “I mean, this is just a very unique venue.”

As the creek-centered event has grown in popularity over the years, so too has the number of boats being entered.

This year there are 20 boats — up from 16 last year — in the water and another four positioned around downtown. Kremers called those “land sharks.”

All entrants can be viewed for the next two-plus months.

The Friends of Carroll Creek Urban Park, which runs this event as well as the Color on the Creek program, will soon launch a website where people can vote for their favorite boat by donating money that will then benefit the local charity chosen for each entry.

The benefit isn’t limited to the charities.

Downtown businesses, he said, also benefit from the increased foot traffic of out-of-towners visiting the creek, he said.

Kremers said he came across a group of people Friday who were visiting from Germantown and discovered the event for the first time while the boats were being staged along the creek.

He said they told him they would be bringing their friends back to see everything once fully installed.

“They were just excited to see the boats, because we had lit them up in the afternoon,” he said. “So they’re bringing all their friends back.”

“Especially this year, a lot of people just don’t want to be inside,” he said. “It’s something you can do with two people or your family and just come down and enjoy a socially responsible gathering outside.”

Jim Durfee and his wife Becky Durfee, who live near Westminster, saw the creek event listed online and made a special trip to Frederick just to see it Saturday evening.

The two drove downtown not knowing where they were going before they happened to look out the window as they crossed the creek on Carroll Street.

The towering structures adorned with colorful lights indicated they had found what they came for.

“We’re very impressed,” Jim Durfee said after the pair finished snapping photos of one of the newest additions to the event — an aircraft carrier. “This is fantastic.”

His wife Becky echoed that sentiment, saying she was surprised by the scale of the event.

“I had no idea it’d be this size and so many and colorful,” she said.

Lisa Collins, who co-founded Color on the Creek and helps organize Sailing through the Winter Solstice, said the annual event continues to grow.

“Each year we just get more and more interest,” she said. “Once we get the boats launched, people contact us through the website or Facebook and say, ‘How do we get a boat next year?’”

Over the years forklifts have been the preferred system for raising and lowering the boats into the water.

This year, however, the group had at their disposal a boom crane truck to hoist the vessels from their trailers on Carroll Street and down to the water below.

M&M Welding & Fabricators, of Mount Airy, donated the use of its truck for the Saturday installation.

Kremers, the organizer, said keeping the boats moored in position and upright is the biggest challenge, since most of the boats are top heavy and must be able to withstand the stiff winds of winter.

In the event that something goes wrong with a boat, the group has an alert system at the ready.

That system is a retiree named Larry Hill.

Hill is a member of what Kremers jokingly referred to as the Carroll Creek Coastal Watch.

From his balcony overlooking Carroll Creek, Hill is able to keep a watchful eye on the boats below.

If the power to a section of boats goes out — something he observed last year — Hill quickly calls Kremers, who coordinates the repair.

Hill, a U.S. Navy veteran and a member of the city’s Parks and Recreation Commission, said Kremers is conscientious about safety concerns.

“With the public nearby, you don’t want any issues,” he said.

The boats will remain in Carroll Creek until their removal the first weekend of February.

Kremers said because they’re nearing capacity for how many boats they can place in the sections of the creek currently used, The Friends of Carroll Creek plans to scale back the number of boats they enter, which will allow for more outside participants.

With few options for safe indoor events during a pandemic, Collins reiterated how appealing she thinks the event will be for people looking for something to do during the winter months.

“Everybody can come down anytime in the next couple months just to get outside and enjoy the creek again, even though it’s dead of winter,” she said.