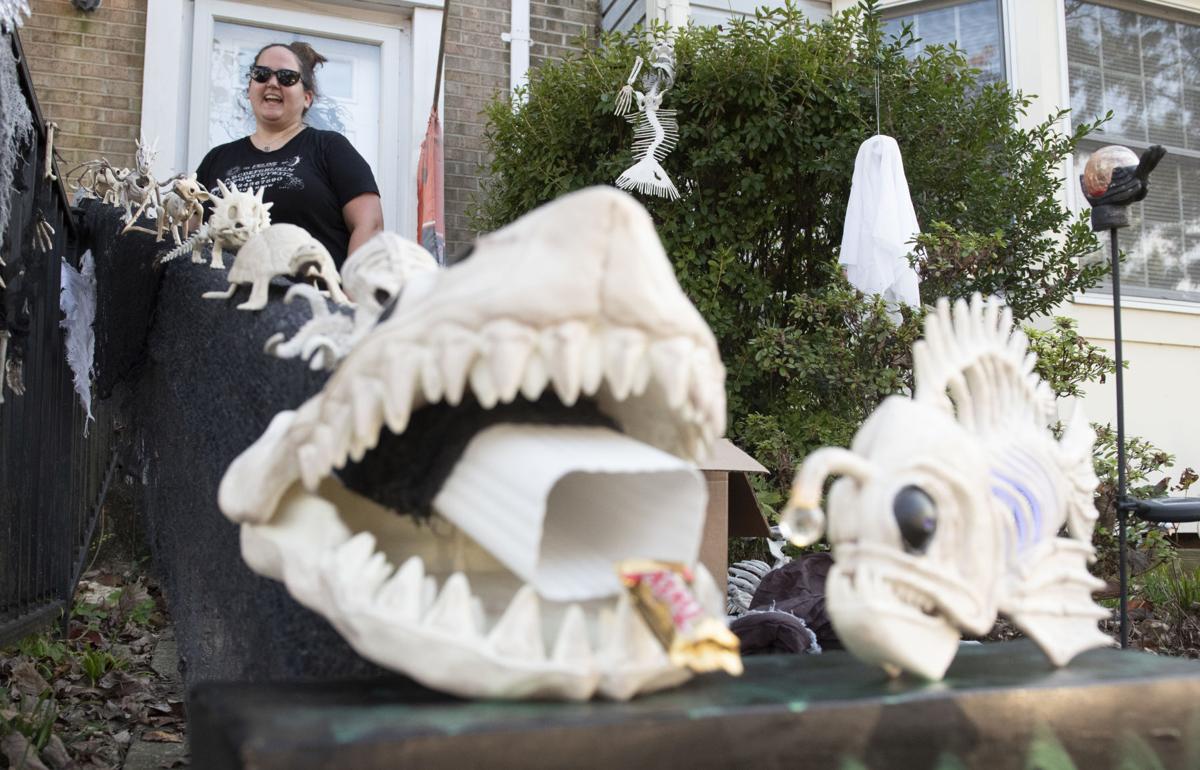 Katie Stansbery demonstrates the candy slide she plans to use for social distancing during Halloween trick-or-treating. 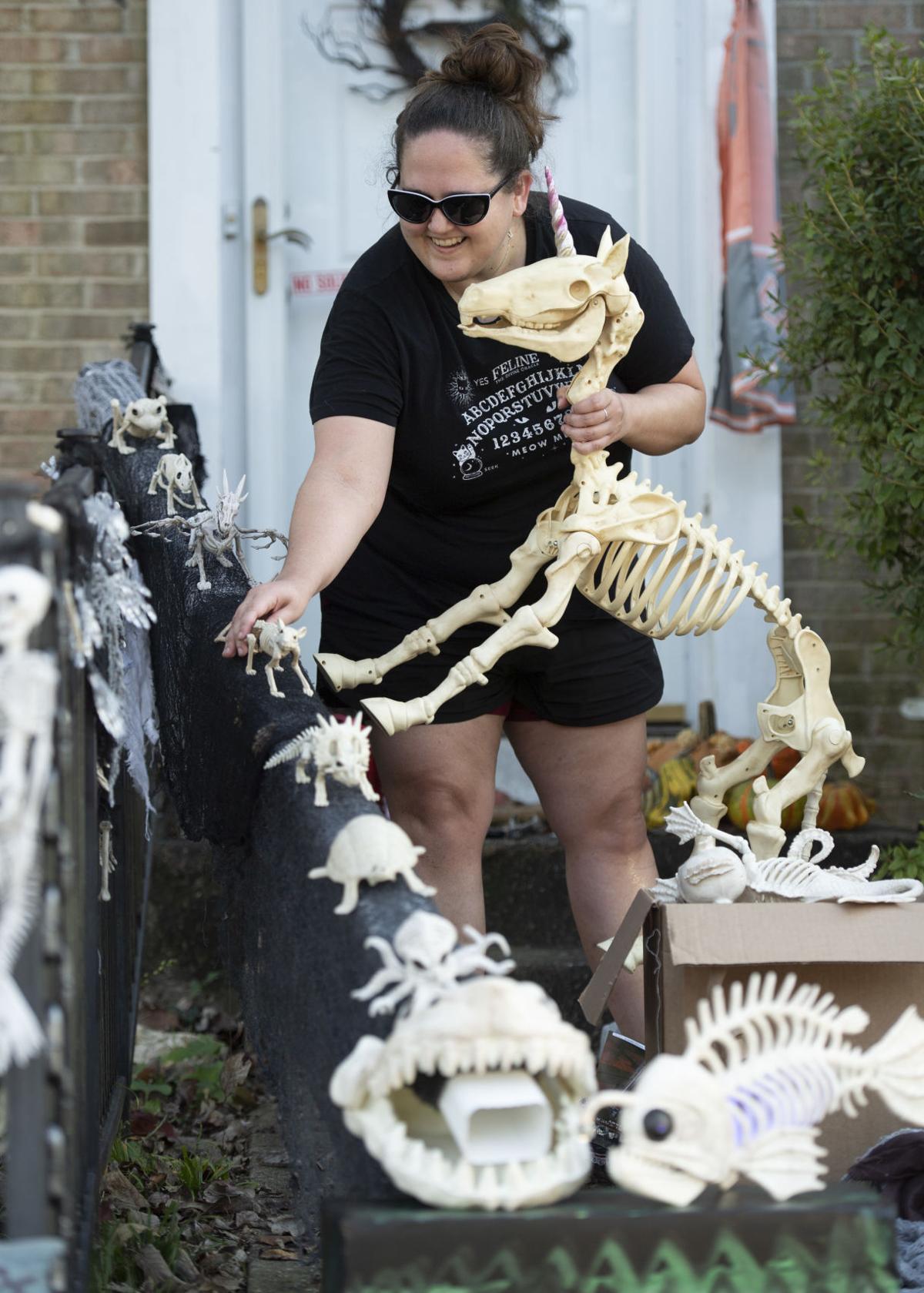 Katie Stansbery works to decorate the candy slide she plans to use for social distancing during Halloween trick-or-treating.

Katie Stansbery demonstrates the candy slide she plans to use for social distancing during Halloween trick-or-treating.

Katie Stansbery works to decorate the candy slide she plans to use for social distancing during Halloween trick-or-treating.

Katie Stansbery loves Halloween. Having grown up in a rural area, she finds the trick-or-treating in her Ballenger Creek neighborhood exciting and festive.

“Usually, on Halloween, I kind of make my front yard into a cemetery,” she said. “And I just hang out outside the entire night.”

This year, though, Stansbery had to reconsider how she will give out Halloween candy to trick-or-treaters. The COVID-19 pandemic has made her wary of the idea of letting dozens of kids into her front yard to reach into the same bowl.

So she took an idea from a Halloween do-it-yourself Facebook group and is building a candy slide.

Her slide will be a 10-foot-long PVC pipe that runs from her front porch to her fence. She plans on using tongs to put the candy into the pipe and ask that children put their buckets or bags beneath the slide to catch the candy.

“I’m trying to be as careful as possible for those people that are trying to do [trick-or-treating],” she said.

Others are going a more traditional route for their goodies, while still making sure kids can pick them up in the safest way possible. Megan Paulin and her husband made individual bags of allergy-friendly candy and will set them outside on a table with plenty of room in between them.

Paulin has an autoimmune disease and is pregnant, so she would prefer children do not come up their walkway.

“We’re pretty festive people in general. We celebrate the holidays a lot, and we’re usually out and about,” Paulin said. “But I’ve been pretty much stationary at the house since the first week of March.”

Rachel Trussell is keeping her kids home but is taking the opportunity to finally replicate an old family tradition of hers: tying candy to balloons and then tying the balloons to the front fence. Her aunt used to do that on Halloween when she was little.

“It’s something that I definitely want to carry on and that I love,” Trussell said. “And it’s so fun seeing all the helium balloons walking around the neighborhood after a while.”

Trick-or-treating is not a sponsored event by her homeowners association, Trussell said, so kids and parents can do as they wish. Paulin and Stansbery said their HOAs have offered guidance for kids who are trick-or-treating, including distancing and wearing masks.

The Centers for Disease Control and Prevention lists trick-or-treating as a moderate-to-high-risk activity. Lower-risk activities include carving pumpkins with members of your household, having a candy scavenger hunt or a virtual costume contest.

Sarah Morris has taken that advice to heart and has planned a scavenger hunt for her kids and their cousins, in addition to getting a piñata and cookie decorating.

Morris was disappointed that the holiday won’t be the same this year but feels that personally, it’s best to take it easy.

“So if people want to go out trick-or-treating and celebrate, that’s your thing,” she said. “Just know that there might be consequences for those actions.”

Others are fine with trick-or-treating and see it as a similar activity to other fall favorites like pick-your-own farms and corn mazes, many of which have been open this year.

Dana Norris plans to take her four kids trick-or-treating as per usual this year.

“We still go about our lives as normally as we can until we meet some kind of rule that doesn’t allow that, like going in some place without a mask or doing school,” Norris said.

Rebecca Madow is planning on making s’mores with her kids and having a candy scavenger hunt. Her two kids are forgoing making costumes, something they do every year, usually weeks in advance.

“I think it’s sad that they’re missing it,” she said, “but I think it’s important to keep them healthy.”

Some friends rigged up a 10 foot 6" pvc pipe to their porch railing. When the kids show up, they just open their goodie bag at the end of the chute, and the candy is dropped into the chute for delivery. Great idea, and everybody keeps their distance.

The lights will be out this year. I will miss seeing the trick or treaters. Please don't TP my house.💀🤡👽

We can’t make any promises.

If they do, will you roll it up and save it for the next panic buying session? [scared][ninja]

I'll send it to you C/O Bosco Manor, along with a Hershy's assortment.